Sorry conservatives: You lost the "war" on Christmas!

Bill O'Reilly and co. have been fighting a feverish war to defend the sanctity of... a pagan festival? (Yup) 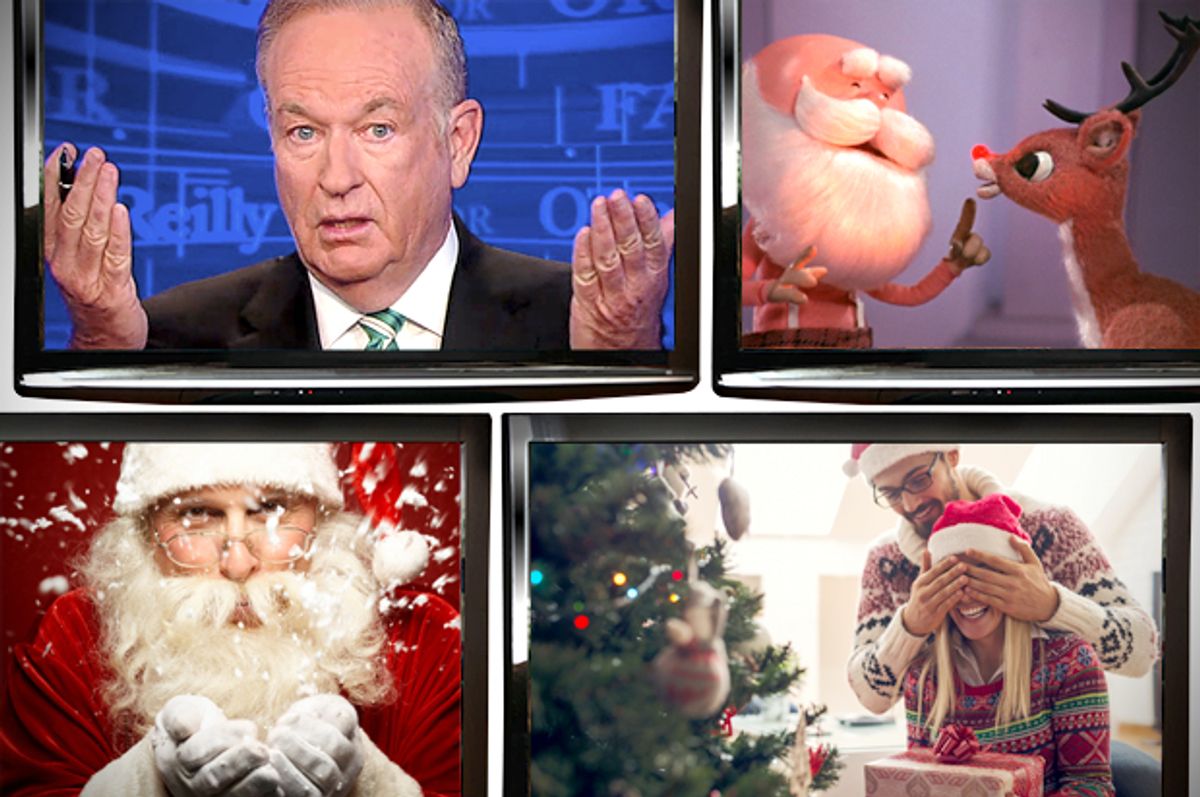 After my divorce, my children spent every other Christmas Day away from home. Those off years were hard for me. When I remarried, my new wife dragged me out to play blackjack at a Reno casino to take my mind off missing them so much. We capped the day with a cheap steak dinner and that Christmas remains one of my fondest memories. My brilliant and loving wife showed me a good time where once there was sorrow.

Now, 10 years later, we have two kids together in addition to our previous children. When we don’t have extended family commitments on Christmas day, we take the whole brood out to eat cheap casino fare and play carnival games at Circus Circus. You might be horrified by what has become a family “tradition,” but I don’t really care how anyone feels about the way we celebrate. This is our tradition, and that's all that matters.

The pressure to conform to some enforced Christmas dogma is at the heart of the nonsensical war on Christmas in recent years. A growing number of Christians want to force us to scrape at the altar of Jesus and Rudolph, two characters I find equally plausible. The constant, tired outrage machine hit full tilt this year when it was taken up by an ever less serious House of Representatives in a resolution to “protect” Christmas. The GOP now wants to deploy government power to protect Frosty and all his pals from unwashed heathens like you and me. The annual narrative has now reached the apex of silly. But rather than be angry, I've decided to delight in this latest development. This brand of reactionary overreach only proves that if there ever were a “war on Christmas,” it’s over now. Secular values have won.

By creating the hysteria over the war on Christmas and then begging for help from manipulative and cynical politicians, Christians have conceded the powerlessness of their own faith. The people most vocal about defending their narrow version of the holiday have created a caricature of Christianity more two dimensional than any dreamt up by atheists. Conservatives who are vehemently against government power have nonetheless viewed it for years now as necessary for policing our sex lives -- and now, apparently, to defend Santa against heretics.

The most troubling aspect to this whole business has always been the impulse toward coercion: You must believe as we do and worship our god and celebrate in a manner that we dictate. It’s the kind of totalitarian impulse that riles up freethinkers and contrarians. If you say we must do something, we’ll invent ever more creative ways to lampoon your most treasured beliefs. (Here's looking at you, Satanic Temple.)

A certain segment of the rightwing community created the war on Christmas, and they did so by trying to purge the holiday of its excessive, booze-soaked roots. Christmas has always been about much more than Jesus. In his excellent book, "The Battle for Christmas," Stephen Nissenbaum goes into great detail about the delightfully debauched — and, ahem, pagan — history of the holiday. It is forever linked with hard partying, celebration, fun and excess. Some Christians want to whitewash the real meaning of the season, which at its most basic is just a damn good time. You could say that my trip to the casino is just as much a traditional celebration of Christmas as "Away in a Manger."

In fairness, some atheist groups have actively antagonized Christians in recent years with things like secular billboards. But the fact remains that if some people don’t like the atheist impulse to speak out, they’re free to ignore it. The small slice of America made up of outspoken atheists is hard to spot unless you’re really looking to be insulted. In truth, the war on Christmas itself is far more pervasive resistible for the war on Christmas. The spittle-soaked conservative tirades gave this nonissue all its heat and light as a cheap grab for ratings and clicks. They also can’t pass up the chance to remind a maligned American minority (atheists) that we don’t belong here.

The war on Christmas was always about a slight majority trying to enforce its will on the rest of us. We must acknowledge Jesus. We must bow down and pay homage to your fictitious Nativity. In America, in 2015, we are a diverse nation of atheists, Buddhists, Jews, Sikhs, Muslims, wiccans and weirdos. We are all faiths and no faiths, and every one of us likes a little down time spent in whatever ways bring us pleasure.

The religious essence of the holiday has become just another cog in the culture wars, shorthand for group identification. In fact, the entire Christian religion is teetering dangerously close to becoming just a plank in a party platform. You too can self-identify as a Christian by loudly defending Christmas against us heathens, and you don’t even have to go to church, feed the poor or read your Bible. You certainly don't have to do unto others as you would have them do unto you. Just put that bumper sticker on your car, and you’re all set!

While Christians reduce one of their holiest of days to a battle over coffee cups, I’ll just declare victory and go home.

This year my wife and I took our children to cut down our own Christmas tree. I even have an angel sitting up on top of it. I am, and shall forever be, in large part a cultural Christian. And the truth of the matter is that the juggernaut that is Christmas in America can never really be harmed (other than during a recession). The billions of dollars spent during the holiday are not going away. And Christmas will always remain a holiday for shopping and family, relaxation and overindulgence. It has never belonged to Christians alone and it never will.