Republicans have hid shamefully behind the patriotism and the flag. Michael Moore just upended the whole scheme 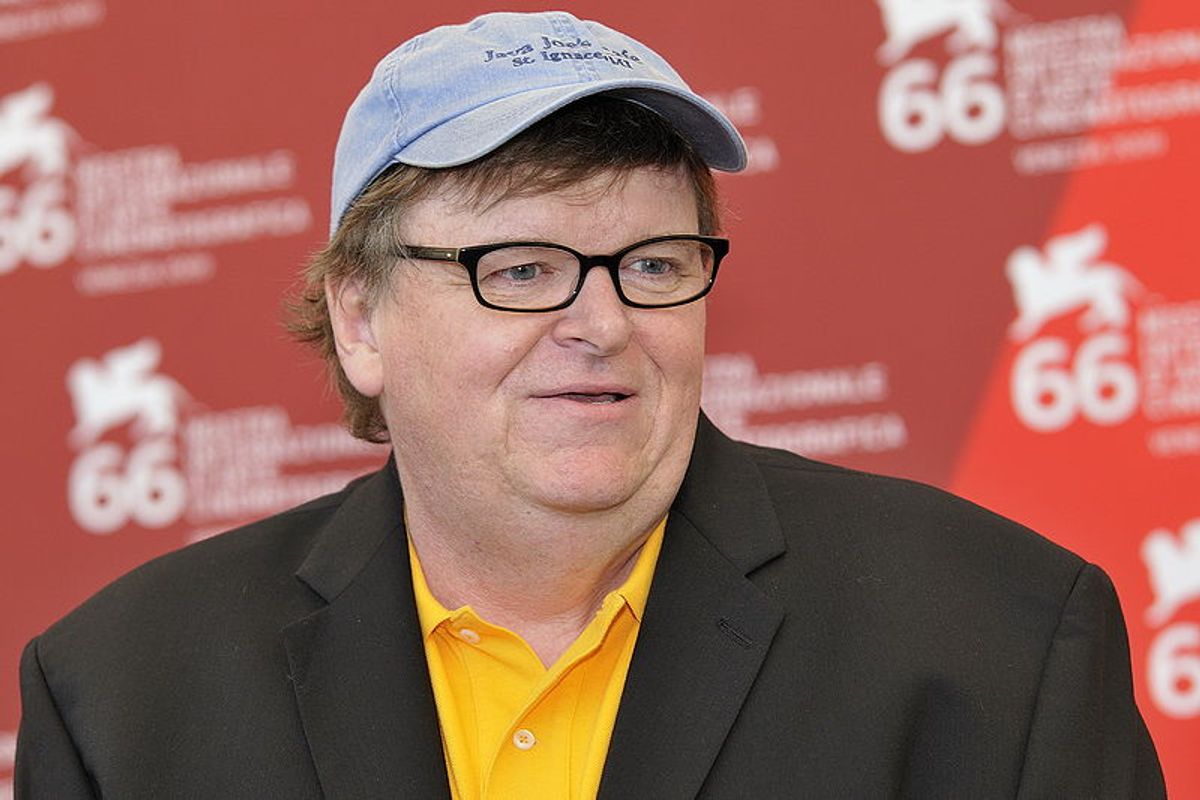 Michael Moore’s new film, “Where to Invade Next,” is sure to generate Oscar buzz.  It is already on the short list of 15 documentaries from which the final five nominations will be announced on Jan. 14. But rather than wonder whether Moore will score a second Oscar (his first was for “Bowling for Columbine” in 2002), the question to ask is whether this film can spark a political revolution just in time for the 2016 election.

“Where to Invade Next” has a wide release set for Feb. 12, which is also Abraham Lincoln’s birthday and the week of the New Hampshire primary.  Coincidence? Definitely not.

The date for the release is only part of the story. The film will be launched in one of the most progressive and activist formats ever conceived. Early test scores of the film have it getting the highest viewer ratings of any of Moore’s previous films. “What it has shown us is the film not only plays well as just a movie, but the issues raised in the film deeply affect people,” Moore said.

So Moore asked his distributors to get on board with a release plan designed to rock the nation: “I said …. give me a month or so to barnstorm the country, me personally, in a big rock ‘n' roll tour bus, and we will criss-cross the country showing the film for free, leading up to the New Hampshire primary -- because the issues in the film are the issues, the real issues, people want being discussed in this election year.”  They may also have music and rallies along the way.

Moore has been a constant innovator in political comedy, so it is no surprise that he has hatched a creative marketing plan to draw as much attention to his new film as he can.  But it isn’t just the stunts that will make the film socially significant; it’s the actual film itself.

“Where to Invade Next” begins with the observation that the United States has not won a war since World War II.  It then comically imagines the Department of Defense calling on Moore to step in and save our nation.  His plan? Invade nations not to take them over, but to take their good ideas. We then see a hilariously ironic shot of Moore on a ship draped in the American flag and heading out on his quest.

Moore then embarks on a tour of a series of European nations and one in Africa where he finds society getting it right. From debt-free education to paid leave, women’s rights, prison reform and delicious school lunches, Moore offers viewers a world where people simply live better than we do here.

In a brilliant move, Moore has made his most patriotic film yet without shooting a single frame in the United States.

That doesn’t mean we don’t get glimpses into our own society, but these largely come from news footage of protests in Ferguson, Missouri, and elsewhere -- not from Moore’s camerawork.  The contrast is stark. Abroad, Moore conquers other nations to pillage their good ideas. At home, we see a nation ripped apart by racism and torn by political division.

The American flag is literally everywhere in this film.  And it works as an excellent motif. It is at once ironic and intensely patriotic.  Most of the shots have Moore carrying the flag across airports into new countries and planting it strategically as he “claims” what he has found for America in a twist on the well-worn imperialist/militarist gesture.

Reversing the link between the right and obsessive patriotism, now it is “lefty” Moore who brandishes the flag everywhere.

But what starts as funny acquires greater and greater force as the film moves on—a force that might have especially intense consequences this election cycle.  Moore’s use of the flag both underscores his very real patriotism, and highlights the way that left progressives have been displaced as advocates for our nation.  The irony of Moore carrying the flag references the various ways that his politics have been called out as treasonous, as anti-American, and as subversive.  As Moore moves throughout the film alongside the American flag he isn’t just claiming the good ideas of other nations; he is claiming the flag and its symbolic force for those on the left.

It is a bold move and a much-needed one as we enter another election cycle. Geoffrey Nunberg has documented the explicit ways that the right has fashioned itself as the party of patriotism and American values.  He points out that it is due to these efforts that even the phrase “liberal values” sounds weird. He reminds us of how awkward it was when John Kerry started his DNC speech with the statement “I’m John Kerry and I’m reporting for duty.” Today conservatives literally “own” the flag and the idea of American values.  If any real progressive politics are going to take place in this nation, that will have to change.

Moore’s film offers an alternative to the militaristic version of American exceptionalism.  And he moves away from the negative politics that have haunted the left since the '60s.  Channeling the ideas of scholar-activist Stephen Duncombe in “Dream: Reimagining Progressive Politics in the Age of Fantasy,” Moore realizes that progressive politics need to move away from criticism and negativity towards a platform that can inspire the imagination.

That is exactly what this film does.

While positive political change has driven every Moore film to date, he has tended to uncover social inequities, inane laws and policies, and social structures rigged to benefit the elite in the hopes that revealing these realities will motivate the audience to struggle for change.  This film turns that process on its head and offers viewers example after example of actual practices that can and do work.

Even more important, the art of the film uses ironic juxtapositions and witty shot construction to encourage creative reflection in the audience.  The film is both funny and deeply disturbing.  It is hopeful and tragic.  It cycles the audience through a range of emotional responses, artfully leaving it with one of the most inspiring images of political action this nation has seen in decades.  After reminiscing about the fall of the Berlin Wall, it ends on a note that reminds us that one small act can lead to huge change.

By the end of the film “Where to Invade Next” refers as much to invading our apathetic political zeitgeist as it does to invading other nations.  The ultimate irony of the film is that all we need to do to improve our nation is change the way we think.

Moore has long had an interest in using his political comedy to influence politics. “Fahrenheit 9/11” was released strategically before the 2004 elections in the hope that it would help remove Bush from the White House. The film generated widespread controversy since it focused on Bush administration lies and deceptions while depicting the President as clueless and dangerous. It documented ties between the Bush and bin Laden families and wondered at the special treatment of Saudis after 9/11. It questioned the botched search for bin laden and the rush to war in Iraq.

“Fahrenheit 9/11” was a bold film that showed the power of a documentary to spark political dialogue and influence public perception. The film was considered so threatening by many on the right that there were concerted efforts to block its distribution. Professors were attacked for showing the film in their classes. And yet the controversy only added to its power.  It won a Palm D’Or and a People’s Choice Award for favorite motion picture—a first for a documentary.

Moore’s new film, “Where to Invade Next,” has the potential to be a far more powerful film than “Fahrenheit 9/11.”  “Fahrenheit 9/11” exposed the lies and deceptions of Bush and his cronies. It spoke truth to power, but, in the end, despite the film’s revelations, Bush pulled off yet another win.

On the other side of the fence, many on the left vote against the right, not for anything. And that’s where the political potential of Moore’s film lies.  It asks us to imagine, if the invasion this country really needs is not an invasion of another country, but rather the invasion of the people into our own political process.  Now that would be a real revolution.

Aol_on Elections 2016 Michael Moore Movies Where To Invade Next