As we enter one of the more consequential years in recent political history, here's what we'd like to see 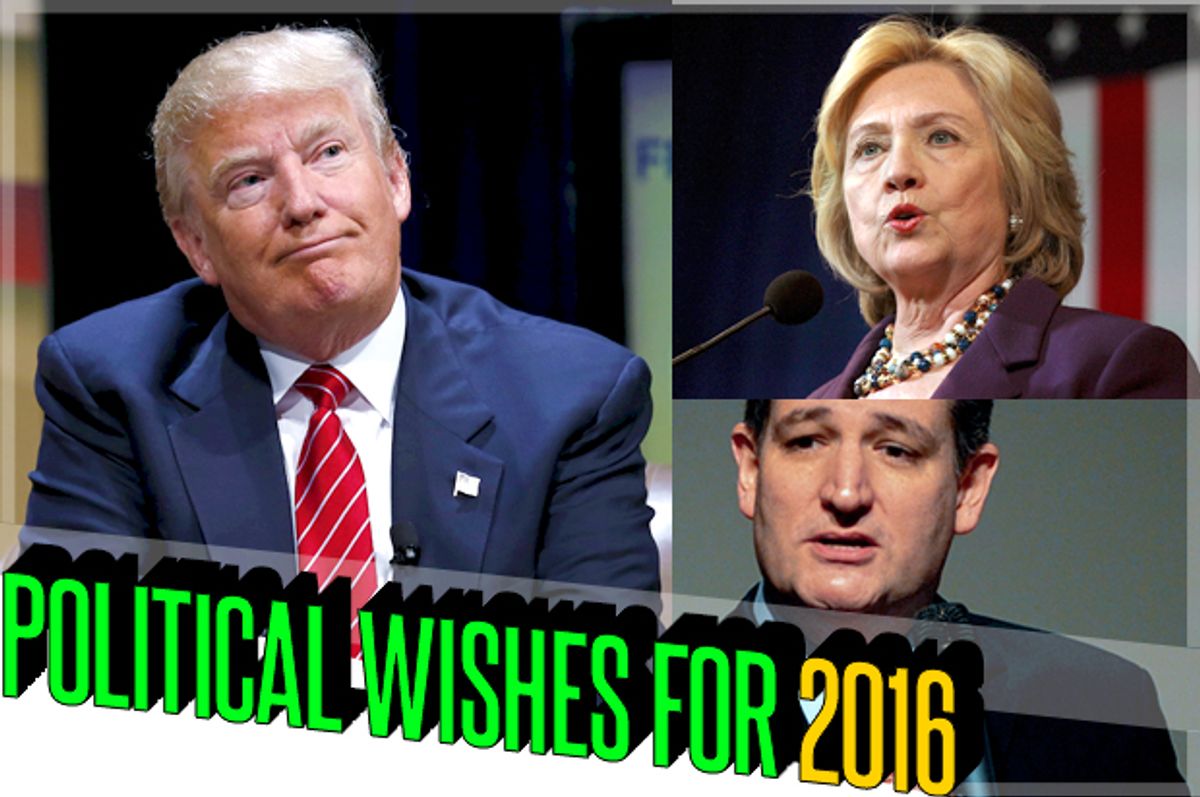 We are, those of us who regularly consume news media, deep into the most hellacious, soul-sucking time of the year. Yes, I’m speaking of the onslaught of the dreaded “Best of Year” lists. All through December, one cannot open a Web browser without stumbling across one clickbait listing or another of the top 10 terrible sports moments of the year or the 25 best "Star Wars" promotional tie-ins of the year, or the top 50 debut pan flute albums of the year. It gets to be a bit much.

There are good reasons for this phenomenon, of course. December is generally a slow news month. We’re all distracted by social engagements and gift-shopping. All the sugar we consume turns our brains into sludge. We writers, being naturally slothful, are desperate to get up from our desks, where we have been working in our pajamas, to begin our long vacation lying on our couches binge-watching Netflix, in our pajamas.

But the Internet content monster is never satiated, always demanding we shovel more and more hot takes into its gaping maw. So instead of a Best of 2015 list, let’s look ahead to next year, with my "Top 6 Hopes for Politics in 2016."

1) May the GOP presidential field stay crowded with candidates.

The field is down to 13 now that Lindsey Graham ended his campaign this week. Of those, the Huffington Post’s national poll tracker has only six of them sitting at 4.6 percent or higher. You wonder how long Carly Fiorina and Rand Paul (2.6 percent each) or Mike Huckabee and John Kasich (2.1 percent each) can keep this going, considering that the number of delegates they will collectively gather could fit around a table at Starbucks.

But if they drop out, we might lose their gloriously pathetic efforts at aping front-runner Donald Trump’s schoolyard insults. And that would be a shame.

Anyway, I am all in favor of these candidates continuing to show the world that if they won the presidency, the Oval Office would have to have a special chair off in a corner where they could sit for timeouts. Stay in the race until at least June, folks. Hold out for prime-time speeches at the convention. Comedians will appreciate all the material.

2) May people leave politicians’ kids out of it.

Seriously, who at the Washington Post thought this was a good idea? Sure, politicians use their kids as props all the time, but it’s something of an inevitable result of our obsession with seeing our political leaders as “normal” people with “normal” family lives that keep them grounded and humble and relatable to your average middle-class schmoe.

The kids don’t have a choice in being part of this, and they deserve as much space as we can possibly give them to grow up in as close to normal an environment as our oversaturated media can possibly allow. There is no public interest in splashing them across the front pages. Or the editorial pages, in this case.

Besides, Ted Cruz’s kids are already saddled with having Ted Cruz as a father. I wouldn’t wish that on even the worst bullies haunting America’s playgrounds.

3) Speaking of Ted Cruz, may he start wearing clothes that fit.

Dude, you’re a senator running for president of the United States. Your wife works for Goldman Sachs. Surely you can afford better than off-the-rack from Ross Dress for Less.

4) May Twitter be fired out of a cannon into the sun.

Now, I am admittedly on Twitter a lot, and sometimes it’s great. I have made professional contacts. I have made IRL friends. (That’s "In Real Life," for those of you not hip to the lingo.) It has often been a source of good reading and movie-watching recommendations. And I enjoy the give-and-take with some of the friends and colleagues I have there. Sometimes when I’m preparing to write, I warm up by slinging out some dumb tweets, just to get my brain going. It is a great tool for a writer.

That said, the terribleness of it for our political and cultural discourse cannot be understated. It is the go-to province of abusive partisans, racists and misogynists. I come in for occasional abuse for some of my public writing, and that is enervating enough, particularly when some right-wing trolls take offense at something I’ve written. Women in particular have invective and rape and death threats hurled at them at a rate that I cannot even begin to fathom. Twitter is notably horrible at policing this and protecting its users from abuse.

All of these complicated issues we have to face in the world today – climate change, gun violence, the quagmire that is the Middle East – and one of the biggest forums for facing them requires us to do so 140 characters at a time, in complete anonymity. That allows people to be unaccountable for their darkest, worst impulses. Which makes it hard to think through a topic, and gets us absolutely nowhere in terms of dialogue to solve problems. Meanwhile, we measure the popularity of positions by how many retweets and likes we get, or how many followers the most retrograde idiots have. It’s an absurd way to go about doing anything.

5) May a Democrat win the presidency next November.

The House is likely to stay Republican, and we all know the GOP caucus there is crazy. Even if Democrats recapture the Senate, they will not have the necessary supermajority to keep the Republicans there from gumming up the works. And all the Republicans running for president are nuttier than a Planters factory. Either Bernie Sanders or Hillary Clinton is far preferable to that Murderer’s Row.

6) May we all make it through the next year psychologically unscathed.

Seriously, it is going to be an ugly, ugly, ugly campaign. We are going to hear warped perspectives and flat-out lying that will have us screaming at each other. Let us take a moment during these holidays to breathe deeply, hug our loved ones, and maybe consider spending the next year living in caves, high in the mountains, where our iPhones can’t get signals. It may be our only hope of retaining our sanity.