Putting the "War on Christmas" to rest: Fox News, sorry to break it to you but it's always been a secular holiday 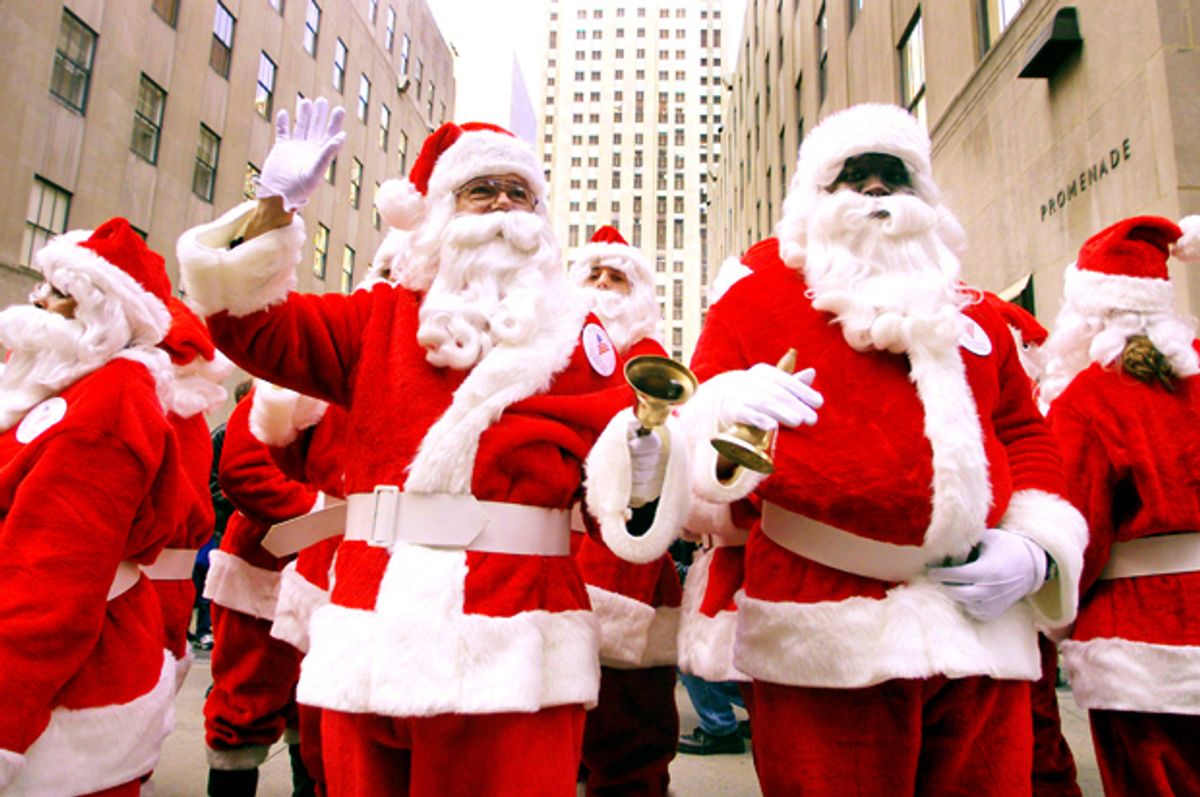 For a few years there, it finally seemed that the right was slowly letting go of the bizarre myth that liberals are waging a "war on Christmas," but this year, the narrative came roaring back with a vengeance, with even Starbucks getting yelled at for having Christmas cups that were somehow not Christmas-y enough, despite being red and green and festive-looking.

That the myth that liberals somehow hate Christmas would come back this year makes perfect sense. The myth dates back to the 1920s and was started by fascist sympathizers who wanted to perpetuate the belief that Jews were somehow undermining Western civilization through subterfuge. It's always been a myth less about Christmas itself and more a way to convey the idea that white Christian conservatives are the "true" Americans and everyone else is a dangerous subversive. While Jews have been eclipsed by Muslims, feminists, black people, gays and generic "liberals" as the hated element supposedly stealing the country, the narrative has stayed the same.

In the year of Donald Trump, when white Christian conservatives are all revved up to fight for their supposed right to cultural dominance, it makes sense that they would go right back to screaming about how the subversives are stealing a holiday they believe belongs to them.

Well, it doesn't, and not just because the Christmas spirit is supposed to be one of generosity, not selfish boundary-policing over who is and isn't a "real" American. While the story of Jesus' birth has a lot of meaning for a lot of people, the fact of the matter is that Christmas has always been about more than that and its roots go far deeper than the myth of a savior born in Bethlehem.

Christmas is, at its heart, a secular holiday. It has survived as long as it has because of its secular nature, which means it's flexible and can be whatever the people of a certain time and place need it to be. That doesn't mean that it's wrong to use it as a religious holiday, if that's what works for you. But it does mean that it's equally fine for non-Christians to celebrate it if they want, or for people to have as much or little religion as they want in their holiday season. It's not a holiday about how white Christian conservatives are better than everyone else, that's for damn sure.

In his new book, "The Myths That Stole Christmas," philosophy professor David Kyle Johnson explores the pagan roots of Christmas. (Many of his ideas are explained in this half-hour interview for Point of Inquiry.) The idea that Jesus was born in late December appears to be a medieval Catholic Church invention in order to discourage the celebration of winter solstice holidays like Saturnalia that were associated with pagan religions.

But even though the church was successful in replacing these celebrations with the unsubtly named Christ's Mass, a lot of pagan traditions hung on through the centuries. As Johnson lays out, the old pagan tradition of nobles playing servant for a day to the common folk of the area evolved into a tradition called "wassailing." where feudal lords and other wealthy people would share their wealth, in the form of food and drink, for a day with common people who showed up their door, usually drunk, and singing for gifts. This, in turn, morphed into Christmas caroling as we know it.

Santa Claus, as Johnson lays out, also seems to have roots in pagan traditions. The historical evidence for a Saint Nicholas is actually quite meager, and it's quite possible that he, like Saint Christopher, is one of those saints that was invented to replace pagan deities, including Odin, that the church wanted local people to stop worshipping.

Even mistletoe is pagan in its roots, as it was treated as a magical plant by worshippers of the old Norse deities.

The lesson here isn't that Christmas is "really" pagan, however. It's that Christmas isn't one thing at all. It's an amalgamation of beliefs and traditions that come from places spanning thousands of miles and have been cobbled together and changed according to local needs for centuries.

That's why it's ridiculous for someone like Megyn Kelly to throw a fit, claiming that Santa Claus is "white." Santa Claus is fictional. And insofar as he's traditional, it's a tradition that many people in many cultures have seen fit to tweak to suit their own purposes for hundreds of years. The American version of Santa Claus was invented in the 19th century by Americans riffing off the Dutch tradition of Sinterklaas, who in turn is a paganized version of a probably mythical man named Saint Nicholas. Santa Claus is whoever you need him to be: A jolly fat man, a tall regal man, or a frigging penguin, if that's what you want. (I vote penguin.) Hell, Rudolph was invented for an ad campaign for Montgomery Ward in 1939. There is no need to be precious about these things.

That's why the supposed "war on Christmas" is such a stupid right-wing myth. It's not just because there's no evidence that liberals are trying to steal your Christmas and it's not even because the myth has unsavory anti-Semitic roots. It's because the very idea makes no sense.

If people, liberal or otherwise, change up holiday traditions to suit their own needs or expand the definition of "the holidays" to incorporate other celebrations that aren't Christmas, they're doing what people have always done: Remaking Christmas in their own image. They aren't ruining it or stealing it. They are evolving it. The whole point of Christmas is that it can be whatever you want it to be.