Is Jesus' birth worth celebrating? The dark subtext of the nativity scene

This Christmas season, let's have an honest conversation about the message the Bible is sending to young women 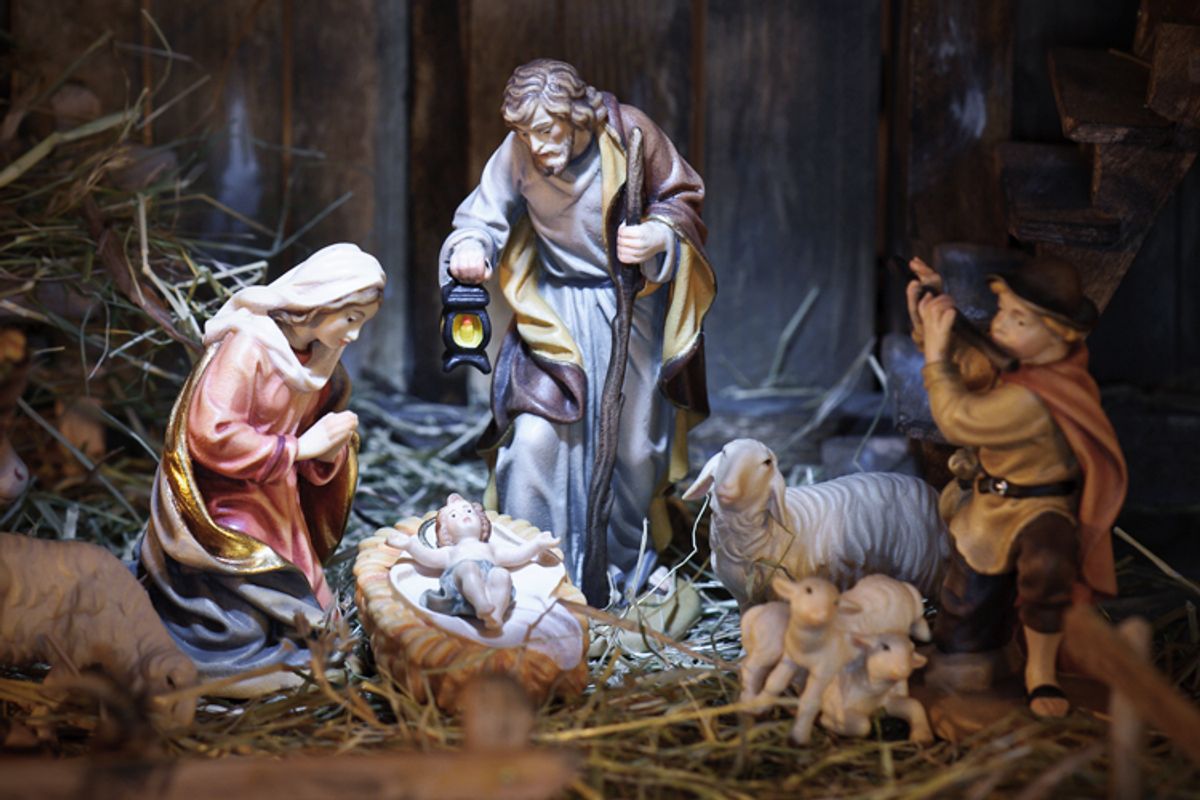 Most Americans, even many who are not very religious, look forward to Christmas as a time to celebrate warmth, friendship, generosity and good cheer. Familiar festivities weave together stories and traditions from many cultures, which makes it easy to find something for everyone. But maybe it’s time to look a little closer at the Christmas story itself.

The birth story of the baby Jesus is heartwarming and iconic—the promise of new life and new hope in a time of darkness. It has inspired centuries of maternal art and is the best loved of all Bible stories. It also has a darker subtext, especially for someone like me—the mother of two daughters.

In the story, an angel appears to a virgin girl, announcing that she will conceive a baby boy. Her fiancé Joseph decides to stick with her only because her baby bump is of divine origins. The author of Luke makes a point of telling us that he refrains from sex with her till after the baby Jesus is born. All of this emphasis on Mary’s sexual history, or rather lack thereof, sends a message that can be shaming and harmful: Only an unbedded, unsullied, unused female—a virgin—could be good enough to birth a perfect child, the son of God.

Girls who have sex are soiled. That may not be the first thing that comes to mind when we see a picture of Madonna and child or hear a Christmas carol, but the message is clear all the same, and the fact that it is subtext may make it all the more insidious for young women.

Mind you, Christianity is not the only religion that has assigned such extraordinary status to the pristine vagina or, conversely, treated female sexuality as something lesser or tainted. For example, Buddha’s mother Maya, called the “best of all women,” becomes pregnant after a god in a dream enters her womb from the side. Adding insult to injury, Buddhism tells us that a

“Bodisat leaves his mother’s womb erect and unsoiled, like a preacher descending from a pulpit or a man from a ladder, erect, stretching out his hands and feet, unsoiled by any impurities from contact with his mother’s womb, pure and fair, and shining like a gem placed on fine muslin of Benares.” — Mahapadana-sutra, Digha ii. 12

In the Ancient Near East, the birthplace of Christianity, some cultures saw the woman’s body as a vessel for a baby, which grew from the seed of a man or sometimes a supernatural being, much as a seed might grow in the earth. In this way of thinking, heroes and powerful men must have come from divine seed, and claims of a sexless conception underscored their supernatural origins. The Pharaoh Amenhotep III, Perseus, Romulus . . . even Augustus, Pythagoras, and Alexander the Great all were the subject of miraculous birth claims.

The enormous value that patriarchal cultures and religions place on female virginity has roots in biology. We’ve all heard the saying, “Mama’s baby, Papa’s maybe.” From time immemorial men have sought to control female sexuality to ensure that the children in which they invest their time, money and life energy are their own; and also to maximize their own offspring. Male animals of some other species do the same. For example, when a new male lion comes into a pride, he may kill all of the cubs from the previous male, which brings the females into heat so that he himself can mate them.

In the tribal, herding cultures of the Near East a young woman’s sexuality—her ability to produce purebred offspring of known origin—was an asset that belonged to her father. In the Hebrew Bible’s legal code, a rapist can be forced to purchase the goods he has damaged and to then keep her as a wife.

A woman’s reproductive capacity is also valuable booty of war. In the battle between the Israelites and Midianites, for example, God’s messenger instructs that the Israelites are to kill all of the women who have been with a man but to keep the virgin girls for themselves. (These and other horrible references here.)

Culture and religion transform biological urges into legally binding prescriptions from God himself. Once that happens, patterns that may have started for practical or biological reasons take on a momentum of their own, and we see this in the history of the Virgin Mary.

The Sexless Union of Israel and Rome

The earliest sects of Christianity disagreed with each other about when and how Jesus became uniquely divine. Some believed that he was adopted by God at the time of his baptism or resurrection. But as Christianity, with its Hebrew roots, adapted to the cultures of the Roman Empire, the story of a supernatural, sexless birth won out. It beautifully merged the god-man tradition of the Empire with Judaism’s obsessive and multifaceted focus on purity—pure bloodlines, pure foods, unblemished bodies, monotheism, unblended fabrics, and, of course, virginity.

The Roman Catholic Church took the last of these new heights, turning Mary into a perpetual virgin for life and then for all of eternity, and eventually making vows of sexual abstinence a requirement of monastic life and the priesthood.

Actress Julia Sweeney, in her funny, tender monologue, Letting Go of God, describes an encounter with two fresh-faced Mormon missionaries. Finding herself incredulous at some their beliefs, she pictures door-to-door Catholics enthusiastically endorsing the faith of her childhood:

If someone came to my door and I was hearing Catholic theology and dogma for the first time, and they said, “We believe that God impregnated a very young girl without the use of intercourse, and the fact that she was a virgin is maniacally important to us . . .” I would have thought that was equally ridiculous. I’m just so used to that story.

“Maniacally important” may be a quirky Julia Sweeney turn of phrase, but it contains an oversized grain of truth. The Catholic pantheon of saints and martyrs is peopled with females who, with Mary as their model of virtuous womanhood, valued their virginity (and their chaste yet semi-sexual devotion to Jesus) more than their lives: St. Agatha, in an attempt to break her virtuous resolve, was handed over to Aphrodesia, “an abominable woman, who, together with her daughters, publicly professed immodesty.” St. Lucy, “was yet very young when she offered to God the flower of her virginity.” St. Barbara’s “father, carrying out her death sentence, beheaded her himself, and in turn, legend says, was consumed by a fire from heaven;” and St. Ursula, was martyred on a prenuptial pilgrimage with 11,000 other virgins!

The glories of female virginity have spawned tributes ranging from paintings to pilgrimages and poetry to place names. Christopher Columbus christened the Virgin Islands in honor of St. Ursula and her untouched entourage, while the State of Virginia was named after England’s Elizabeth, “The Virgin Queen.” Virginia remains a popular girl’s name in the U.S., along with a host of variants such as Ginny, Ginger, Gina, Lagina, and Gigi. All of these mean chaste, fresh and maidenly—virginal.

Protestant Christianity is a rebel offspring of the Vatican, and even though the Protestant reformers rejected the cult of Mary, Catholicism’s supreme value on female chastity was deeply imbedded in their DNA, where it persists to this day. Among the more quixotic manifestations are purity balls and promise rings through which a young girl can pledge her maidenhead to her father for safekeeping until such time as he should hand it over to a mutually agreeable young man.

The image of a girl in a white dress dancing with her daddy, like a beautiful painting of Madonna and child, may evoke a feeling of sweet nostalgia. But rituals and icons like these are artistic residual of the ancient Near Eastern culture in which women (along with children and slaves and livestock) wereliterally possessions of men. As writer Jessica Valenti outlines in her book, The Purity Myth,they are the bright surface of a dark, deep cultural current that denies and shames women’s sexuality.

A woman used is a woman soiled. A woman raped is a woman ruined. A girl who explores her body with a boy is a licked lollypop. A divorced woman shouldn’t get married in white. Only an unbedded and so unsullied female—a virgin—could be pure enough to birth a perfect child, the son of God.

How can sex-positive people who also enjoy Christmas affirm what it means to be fully female, including the physical pleasures of the female body, not merely its reproductive potential? How can all of us teach our daughters that their bodies are wholesome and beautiful, whether or not they have been molested or assaulted or have had sexual experiences of their own choosing? How can we help to break down the harmful virgin-whore dichotomy, with the only alternative being asexual motherhood?

Some Christian theologians have returned to emphasizing the earliest Christ birth narratives, in which Jesus came into the world in the normal way. Two Church fathers, Origin and Justin Martyr, mention sects of Christians who believed Jesus was the natural son of Mary and Joseph. The Apostle Paul and even the writer of Luke appear to have held this perspective, and the virgin birth is now thought to be a late addition to the gospel narratives.

Episcopal priest, Chloe Breyer summarizes the long history of Christian debate over the virgin birth in her article, “The Earthly Father.” Even after virgin birth stories emerged, a countervailing illegitimacy tradition persisted for centuries. By the time the Bible congealed in the fourth century, such perspectives were considered heretical, but they have been revived in recent years. Such arguments admittedly go against the current, but they show that belief in a virgin birth—with all that implies about female sexuality—is not necessaryto Christianity or to appreciating many kinds of symbolism in Christmas story.

Progressive Christians, do not treat the Bible as the literally perfect word of God but instead understand it as a human-made set of documents containing moral and spiritual insights (and failings) of our ancestors. Secularists, though they may not prize the Bible, understand all sacred texts in this way, which allows us to glean through, keeping the parts that fit and treating the rest as a window into human history and psychology.

For those who share this mindset, whether or not they retain some belief in the supernatural, the Christmas story and season offer valuable opportunities to open up conversation with young people about many aspects of humanity’s long moral arc, including perspectives on the female body. Simply leaving youth to internalize negative messages about sexuality or waiting for them to bring up awkward topics is asking them to do our job. The wise parent or aunt or friend tunes in to readiness and explores ideas and values as opportunities arise. Perhaps one of your gifts during this holiday season could be the gift of a conversation.