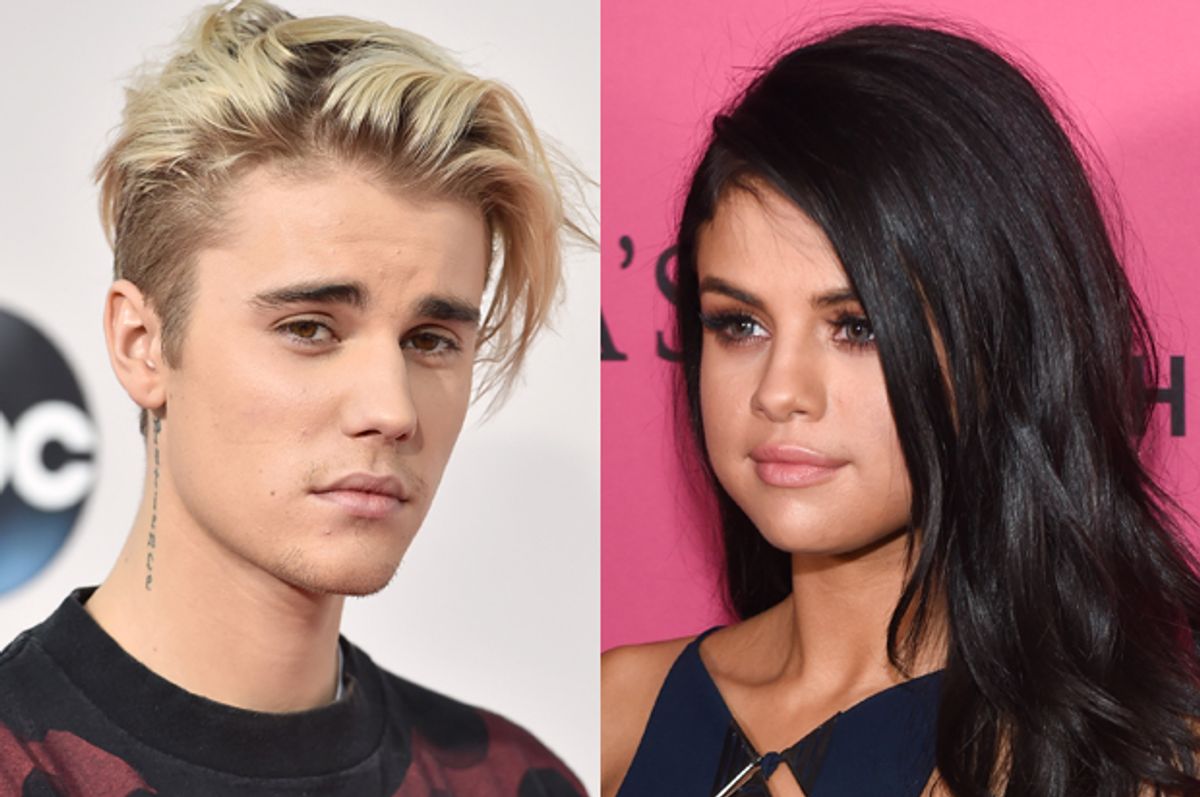 Selena Gomez’s "Revival" dropped this year on October 6, a little over a month before Justin Bieber’s fourth studio album "Purpose" came out on November 13. For both Selena and Justin, these albums signaled to the world their “comebacks.” Justin was back to deliver himself from the evil of bratty deposition videos, throwing eggs at a neighbor’s house, and screwing with ex-girlfriend Selena’s heart. Selena’s comeback, also signaling the beginning of her contract with new label Interscope, was framed as more of a restart. It signaled her transformation into a full-on grown adult woman who has found confidence on the inside as well as the outside, after finally having moved on from the heartbreak she endured from her famously tumultuous relationship with “bad boy” Bieber.

Justin and Selena were rumored to have started dating under contract, but regardless of the couple’s origins, the two dated publically on and off for five years. Anyone who has spent time on gossip blogs between now and 2009 knows the two have serious history. In the promotional interviews for their albums, both Selena and Justin openly acknowledged their relationship with one another. Watch Seacrest ask Selena about Justin, read Justin’s Complex cover story, which reads a lot like a confessional, and they both answer insightfully about one another, either at length or emphatically. In the last couple of months, Justin posted throwback photo after throwback photo of him and Selena during happier times, leaving all of us to wonder hungrily, What is currently going on between the two of them, really?

The biggest pop stars of 2015 have participated in what I have decided to refer to as the “soap opera-fication” of themselves, or the capitalization on their relationship narratives for clicks and hits. We have seen soap-operafication everywhere this year. Meek Mill's first single off his debut LP “Dreams Worth More than Money,” “All Eyes On You,” was released in June and featured his rap star girlfriend Nicki on the track and in the video. October’s One Direction single "Perfect" off their fourth LP is a suspiciously deliberate response to Swift's “Style,” which came out as a single in February and was very publically regarded as being about 1D frontman Harry Styles. Kylie Jenner popped up in Tyga's two pretty forgettable music videos released this year, and Tyga popped up often on Kylie’s snapchat and on her holiday gift guide. Newcomer and rapper Lil Durk put out "My Beyoncé,” a love song about his rumored girlfriend, DeJ Loaf, featuring said rumored girlfriend -- and soon after it was released, the pair was photographed PDA-ing hard. Looking back at 2015, the "it" move was not to just publicly address the relationship you were in, but to drum up interest in the idiosyncrasies of it with everybody watching in real time.

There are obvious advantages of publicly associating with your famous significant other, especially if this person is more famous than you, or just has wider reach. “All Eyes on You” is not a good representation of the kind of rapping Meek Mill is capable of, but it did make him well-known for being Minaj’s boyfriend, and she’s a household name.

Focusing heavily on the relationship drama of pop stars during promotional seasons to assist with record releases is not a new concept, of course — Justin Timberlake's song “Cry Me a River,” released in 2002, was famously rumored to be about ex-girlfriend and tabloid staple Britney Spears. But Justin himself did not publicly confirm this until 2011, nine years after the record was released. The tiny nugget of a rumor that the song might be about Britney was leaked to gossip mags around the time the song was announced as a single, and gossip mags spun it however they wanted to. Beyoncé went public with her relationship with Jay Z as part of the strategy to launch her solo career in ’03. They were seen together in music videos and on red carpets, but in interviews the pair remained famously private about their relationship over the last decade and were rarely mentioned in gossip rags. Flash forward to 2015, though, and you can go to Beyoncé’s Tumblr for personal photos of her life with her husband Jay Z — or you can wait until gossip blogs write about them, rehashing content that Beyoncé has already offered up herself. The Beyoncé content that makes the news is what she posts to her Instagram or Tumblr: idyllic family scenes of Jay and Blue Ivy on vacation in Italy or the family at a Halloween party. Whatever happened in the elevator between Jay and Solange in 2014 became old news fast, but only because Beyoncé quickly and publicly dismissed it — if that had happened 10 years ago, when Beyoncé had no direct platforms from which to do damage control, the rumors would have lingered on.

Since artists today are feeding the public information first-hand on their personal Instagram and Twitter accounts, they retain the ability to more easily shape their public image. This content control gives them the power to run the gossip narrative, manipulate the appearance of drama in their life, or even make things up altogether, whenever they want. They can be prudent about it, or not, and it can feel like a PR dream. A few months ago Nicki posted a photo of a ring that hinted at an engagement between her and Meek. Blogs speculated for a month about whether or not the pair had gotten engaged: then he gave her another ring. The story was picked up everywhere -- Google searches spiked for "is Nicki Minaj engaged?" Last week, reality star Kourtney Kardashian posted a photo of a bouquet of pink roses without identifying the sender, and here we are, left to speculate whether they are from Justin Bieber, whom Kourtney has been rumored to have had a fling with. Probably the strangest fake-out of 2015 happened back in January, when Beyoncé posted this Instagram picture that seemed to insinuate in an extreme way that the superstar could be expecting a second child. We forgive these dupes and overlook red herrings in order to preserve the narrative, because we want to believe these pop stars are real people, and that their branded Instagrams offer authentic peeks into their lives.

Changing the narrative of one’s own career to the point where you're expanding your fan base and adjusting your alignments with corporations takes time and investment, but relationship drama is a quick fix if you're a pop star wanting to remain in the news. Just yesterday, Gomez posted this photo of her sleeping in bed with her godson, an almost identical photo to the one Bieber posted two days ago of him sleeping with his little brother Jaxon. We are supposed to think this means something. It might not mean anything at all, but it makes for good speculation. In 2015 it takes two seconds to post an Instagram and get a reaction, and everybody is watching at any given time. The immediacy is the key to the modern soap opera.

Pop reached a powerful summit in 2015, with control in audio, video and, when you put on a show of your personal drama for the world, websites upon websites of focused content. For me, 2015 will go down as the year of the pop star soap opera, regardless of whether or not I knew I was being played.

Christina Drill (@stidrill) is a writer based in New York. Read more of her work at www.christinadrill.com.