The plutocrats are winning: American democracy is being sold off, piece by piece

The horrors mount. A new $1.15 trillion spending bill promises a bonanza for the donor class. Where does it end? 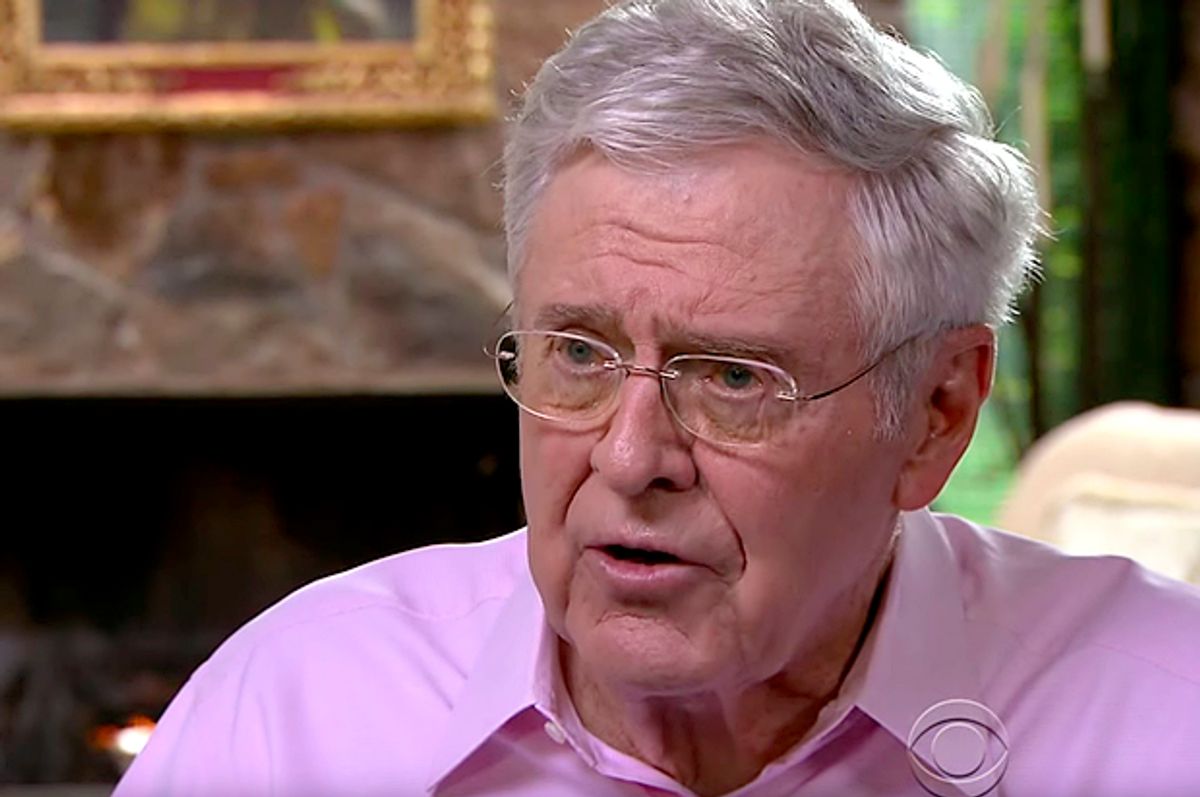 In the fall of 2001, in the aftermath of 9/11, as families grieved and the nation mourned, Washington swarmed with locusts of the human kind: wartime opportunists, lobbyists, lawyers, ex-members of Congress, bagmen for big donors: all of them determined to grab what they could for their corporate clients and rich donors while no one was looking.

Across the land, the faces of Americans of every stripe were stained with tears. Here in New York, we still were attending memorial services for our firemen and police. But in the nation’s capital, within sight of a smoldering Pentagon that had been struck by one of the hijacked planes, the predator class was hard at work pursuing private plunder at public expense, gold-diggers in the ashes of tragedy exploiting our fear, sorrow, and loss.

What did they want? The usual: tax cuts for the wealthy and big breaks for corporations. They even made an effort to repeal the alternative minimum tax that for fifteen years had prevented companies from taking so many credits and deductions that they owed little if any taxes. And it wasn’t only repeal the mercenaries sought; they wanted those corporations to get back all the minimum tax they had ever been assessed.

They sought a special tax break for mighty General Electric, although you would never have heard about it if you were watching GE’s news divisions — NBC News, CNBC, or MSNBC, all made sure to look the other way.

They wanted to give coal producers more freedom to pollute, open the Alaskan wilderness to drilling, empower the president to keep trade favors for corporations a secret while enabling many of those same corporations to run roughshod over local communities trying the protect the environment and their citizens’ health.

It was a disgusting bipartisan spectacle. With words reminding us of Harry Truman’s description of the GOP as “guardians of privilege,” the Republican majority leader of the House dared to declare that “it wouldn’t be commensurate with the American spirit” to provide unemployment and other benefits to laid-off airline workers. As for post 9/11 Democrats, their national committee used the crisis to call for widening the soft-money loophole in our election laws.

America had just endured a sneak attack that killed thousands of our citizens, was about to go to war against terror, and would soon send an invading army to the Middle East. If ever there was a moment for shared sacrifice, for putting patriotism over profits, this was it. But that fall, operating deep within the shadows of Washington’s Beltway, American business and political mercenaries wrapped themselves in red, white and blue and went about ripping off a country in crisis. H.L. Mencken got it right: “Whenever you hear a man speak of his love for his country, it is a sign that he expects to be paid for it.”

Fourteen years later, we can see more clearly the implications. After three decades of engineering a winner-take-all economy, and buying the political power to consummate their hold on the wealth created by the system they had rigged in their favor, they were taking the final and irrevocable step of separating themselves permanently from the common course of American life. They would occupy a gated stratosphere far above the madding crowd while their political hirelings below look after their earthly interests.

The $1.15 trillion spending bill passed by Congress last Friday and quickly signed by President Obama is just the latest triumph in the plutocratic management of politics that has accelerated since 9/11. As Michael Winship and I described here last Thursday, the bill is a bonanza for the donor class – that powerful combine of corporate executives and superrich individuals whose money drives our electoral process. Within minutes of its passage, congressional leaders of both parties and the president rushed to the television cameras to praise each other for a bipartisan bill that they claimed signaled the end of dysfunction; proof that Washington can work. Mainstream media (including public television and radio), especially the networks and cable channels owned and operated by the conglomerates, didn’t stop to ask: “Yes, but work for whom?” Instead, the anchors acted as amplifiers for official spin — repeating the mantra-of-the-hour that while this is not “a perfect bill,” it does a lot of good things. “But for whom? At what price?” went unasked.

Now we’re learning. Like the drip-drip-drip of a faucet, over the weekend other provisions in the more than 2000-page bill began to leak. Many of the bad ones we mentioned on Thursday are there — those extended tax breaks for big business, more gratuities to the fossil fuel industry, the provision to forbid the Securities & Exchange Commission from requiring corporations to disclose their political spending, even to their own shareholders. That one’s a slap in the face even to Anthony Kennedy, the justice who wrote the Supreme Court’s majority opinion in Citizens United. He said: “With the advent of the Internet, prompt disclosure of expenditures can provide shareholders and citizens with the information needed to hold corporations and elected officials accountable for their positions.”

Over our dead body, Congress declared last Friday, proclaiming instead: Secrecy today. Secrecy tomorrow. Secrecy forever. They are determined that we not know who owns them.

The horrors mount. As Eric Lipton and Liz Moyer reported for The New York Times on Sunday, in the last days before the bill’s passage “lobbyists swooped in” to save, at least for now, a loophole worth more than $1 billion to Wall Street investors and the hotel, restaurant and gambling industries. Lobbyists even helped draft crucial language that the Senate Democratic leader Harry Reid furtively inserted into the bill. Lipton and Moyer wrote that, “The small changes, and the enormous windfall they generated, show the power of connected corporate lobbyists to alter a huge bill that is being put together with little time for lawmakers to consider. Throughout the legislation, there were thousands of other add-ons and hard to decipher tax changes.”

No surprise to read that “some executives at companies with the most at stake are also big campaign donors.” The Times reports that “the family of David Bonderman, a co-founder of TPG Capital, has donated $1.2 million since 2014 to the Senate Majority PAC, a campaign fund with close ties to Mr. Reid and other Senate Democrats.” Senator Reid, lest we forget, is from Nevada. As he approaches retirement at the end of 2016, perhaps he’s hedging his bets at taxpayer expense.

Consider just two other provisions: One, insisted upon by Republican Senator Thad Cochran, directs the Coast Guard to build a $640 million National Security Cutter in Cochran’s home state of Mississippi, a ship that the Coast Guard says it does not need. The other: A demand by Maine Republican Senator Susan Collins for an extra $1 billion for a Navy destroyer that probably will be built at her state’s Bath Iron Works – again, a vessel our military says is unnecessary.

So it goes: The selling off of the Republic, piece by piece. What was it Mark Twain said? “There is no distinctive native American criminal class except Congress.”

Can we at least face the truth? The plutocrats and oligarchs are winning. The vast inequality they are creating is a death sentence for government by consent of the people at large. Did any voter in any district or state in the last Congressional election vote to give that billion dollar loophole to a handful of billionaires? To allow corporations to hide their political contributions? To add $1.4 trillion to the national debt? Of course not. It is now the game: Candidates ask citizens for their votes, then go to Washington to do the bidding of their donors. And since one expectation is that they will cut the taxes of those donors, we now have a permanent class that is afforded representation without taxation.

A plutocracy, says my old friend, the historian Bernard Weisberger, “has a natural instinct to perpetuate and enlarge its own powers and by doing so slams the door of opportunity to challengers and reduces elections to theatrical duels between politicians who are marionettes worked by invisible strings.”

Where does it end?

By coincidence, this past weekend I watched the final episode of the British television seriesSecret State, a 2012 remake of an earlier version based on the popular novel A Very British Coup. This is white-knuckle political drama. Gabriel Byrne plays an accidental prime minister – thrust into office by the death of the incumbent, only to discover himself facing something he never imagined: a shadowy coalition of forces, some within his own government, working against him. With some of his own ministers secretly in the service of powerful corporations and bankers, his own party falling away from him, press lords daily maligning him, the opposition emboldened, and a public confused by misinformation, deceit, and vicious political rhetoric, the prime minister is told by Parliament to immediately invade Iran (on unproven, even false premises) or resign. In the climactic scene, he defies the “Secret State” that is manipulating all this and confronts Parliament with this challenge:

Let’s forget party allegiance, forget vested interests, forget votes of confidence. Let each and every one of us think only of this: Is this war justified? Is it what the people of this country want? Is it going to achieve what we want it to achieve? And if not, then what next?

Well, I tell you what I think we should do. We should represent the people of this country. Not the lobby companies that wine and dine us. Or the banks and the big businesses that tell us how the world goes ‘round. Or the trade unions that try and call the shots. Not the civil servants nor the war-mongering generals or the security chiefs. Not the press magnates and multibillion dollar donors… [We must return] democracy to this House and the country it represents.

Do they? The movie doesn’t tell us. We are left to imagine how the crisis — the struggle for democracy — will end.

As we are reminded by this season, there is more to life than politics. There are families, friends, music, worship, sports, the arts, reading, conversation, laughter, celebrations of love and fellowship and partridges in pear trees. But without healthy democratic politics serving a moral order, all these are imperiled by the ferocious appetites of private power and greed.

So enjoy the holidays, including Star Wars. Then come back after New Year’s and find a place for yourself, at whatever level, wherever you are, in the struggle for democracy. This is the fight of our lives and how it ends is up to us.