Defined by their look: First ladies must set the right tone with their wardrobe -- is this too colorful for the age of ISIS? 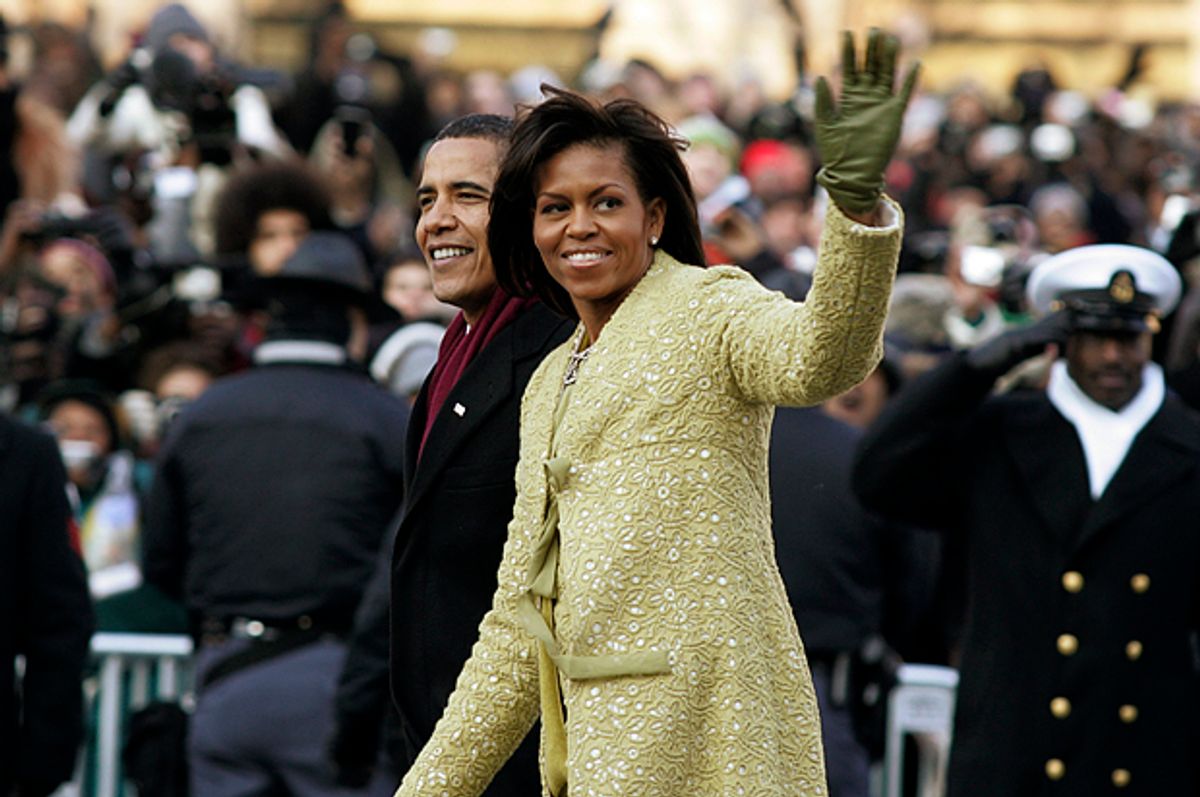 Michelle Obama has set a high style bar for whoever succeeds her as first lady—or even first husband—in just over a year’s time. But she is far from the first in her position to be defined by her look.

Michelle will be remembered for her bare, gym-honed arms, bold colors and mix of glamour and high street staples. Nancy, however, was known for her strong and conservative "Reagan red," Barbara Bush for her pearls, and Mamie Eisenhower for her soft ultra-feminine pink, to name but three. Frances Cleveland’s shaved neck and plunging necklines shocked temperance societies of the time but lent a youthful glamour to her much older husband’s presidency. Jackie Kennedy lent a youthful elegance to the White House, but her power as perhaps the supreme fashion of all also had its downsides. She was even blamed for depleting the leopard population simply by wearing a leopard skin coat.

By contrast, arguably the greatest of great first ladies, Eleanor Roosevelt, was never a fashion plate—nor did she want to be. She thought nothing of getting wet in a rain shower or muddy in a field, if it meant that she could do her job better and quicker. Her practical mode of dress, which sometimes descended into the slightly disheveled, merely accentuated her wholesome and selfless concern for the dispossessed and needy. In short, her style—or lack thereof—suited the image she sought to convey, particularly during the grueling years of the 1930s Depression and New Deal.

Her British counterpart during the Second World War, Clementine Churchill, was a more deliberate master of the sartorial arts. Before she married Winston, she was regularly seen in shirt tie and collar—the conspicuous uniform of the Suffragist as her husband-to-be would have known. She was not afraid to make her views known to him—as he quickly discovered.

And indeed, while she changed her mode of dress after her marriage, her support for the cause never ceased. She thought the sort of militant protests seen in today’s "Suffragette" movie necessary, though she was once forced to save Winston’s life from an activist who tried to push him in front of a moving train. Only Clementine’s actions in leaping over a pile of luggage to grab him by the coattails ensured that he was still around in 1940 to stand up to Hitler. It took a while to bring him around, but she did eventually persuade him to vote in favor of giving at least some women the vote when a bill went before Parliament in 1918.

Once Churchill became Britain’s prime minister, she set about choosing a wardrobe ingeniously designed to help raise morale and keep the people going through their darkest hour. Every day she wore a turban – some fashioned from silks printed with words from his most stirring speeches – as a tribute to the women making munitions and working with dangerous machinery and chemicals in factories, who had to wear turbans for safety reasons. As the prime minister’s wife, Clementine wanted to show solidarity with these "mothers of England" who formed the backbone of wartime defiance. Her turban did more than a thousand government pronouncements to proclaim that "we are all in it together."

She also chose bright colors—particularly flame red—and striking fake leopard skin coats specifically to denote confidence and optimism on her frequent tours of bombed-out streets. She cut a striking figure of smiling hope and comfort amid all the rubble and desolation. Her top-button coats became so well-known and so widely copied, they were colloquially known into the 1960s as Clementines.

Clementine never emerged from bomb-blasted Downing Street less than immaculate. Indeed, the lack of hot water led her to wash her hair in benzene (despite the fire risk) to make it as shiny as possible. Artfully applied cosmetics would hide dark shadows from lack of sleep from the noise of bombing raids. She also still insisted on dressing for dinner.

To look scruffy, downbeat or unkempt would suggest she had given up. Nothing of the sort must ever be imagined by anyone. Confidence in victory, even against seemingly impossible odds, was for a long time all that Britain had going for it. Clementine knew the very great part she had to play in keeping spirits high even while bombs were falling and invasion by Nazi Germany seemed only days away. War—whether against another state or terrorist movement—always poses particular problems for a leader’s spouse. There is a fine line between denoting confidence and optimism and seeming not to care—Clementine herself learned much from the way Herbert Asquith, British prime minister for the first half of the Great War, and his wife, Margot, appeared to lack empathy with the rest of the country whose sons were being killed on the Western Front by the thousands. Margot was slammed for wearing osprey feathers in a hat, because they were associated with Germany, thus suggesting, wrongly, that she was not sufficiently patriotic or engaged in her country’s great struggle.

Today, we are once again facing a violent opponent intent on destroying our freedoms and way of life. It is a difficult time for first ladies to strike the right tone. Certainly, the slitted skirts and perma-pouts of recent French first ladies—notably Carla Bruni Sarkozy and President Hollande’s former partner Valerie Trierweiler—were perhaps more apt for boosting the post-crash French economy than the country’s newly declared state of war against the Islamic State. Indeed, the French president currently has no obvious female companion at all—which may be better than an inappropriate one in such dangerous times.

In Russia, President Putin is also alone, having got divorced a few years ago. “The first lady’s position has been vacant for a while—Russians prefer the father of the nation to be single,” Sergei Markov, vice president of Plekhanov Economic University in Moscow and a frequent adviser to Putin in the past, said recently. Lyudmila Putina disappeared from the public eye in 2008, and before that, Markov explained, “she obviously embarrassed the president publicly and seemed a burden.”

Indeed, the only Russian first lady of true international stature since the tsars was Raisa Gorbachev. Articulate, outspoken and with an exuberant sense of style she was widely recognized as part of Russia’s ruling couple who traveled extensively with Mikhail (the last president of the Soviet Union) in the late 1980s and early 1990s to conferences abroad where her contribution was widely appreciated.

Back home, though, her fur coats, jewelry and Pierre Cardin suits bought with her credit card in French boutiques did not go down well with overworked Russian women waiting for hours to buy a bottle of milk. Nor did male-dominated Soviet society take kindly to her involvement in every aspect of national political life. Her style was seen as too confident, too exuberant, perhaps in a way also too Western.

Although her elegance and obvious humanity did much to improve her country’s reputation abroad, she failed—fatally—to present herself sympathetically at home. Dubbed the "Tsarina," she was accused of spending more time in Cartier than in helping her people. Her expensive stylishness was becoming a problem in a country fraught with economic hardship and accustomed to a universal dreary greyness in public life.

Sensing trouble, Raisa once offered to help sell off her wardrobe to help pay the Soviet army’s wages. The offer was turned down by the generals, who claimed pointedly that the money such a sale would raise was far in excess of their needs. Soon after the Gorbachevs were forced out of power. Her story merely underscores just how careful a first fady has to be.

Sonia Purnell is the author of "Clementine: The Life of Mrs. Winston Churchill"—published by Viking.