Maybe Jon Stewart can shame them: The right loves guns more than schoolkids

Republicans want to fight terrorism, but have no problem with terrorists having assault weapons. What gives? 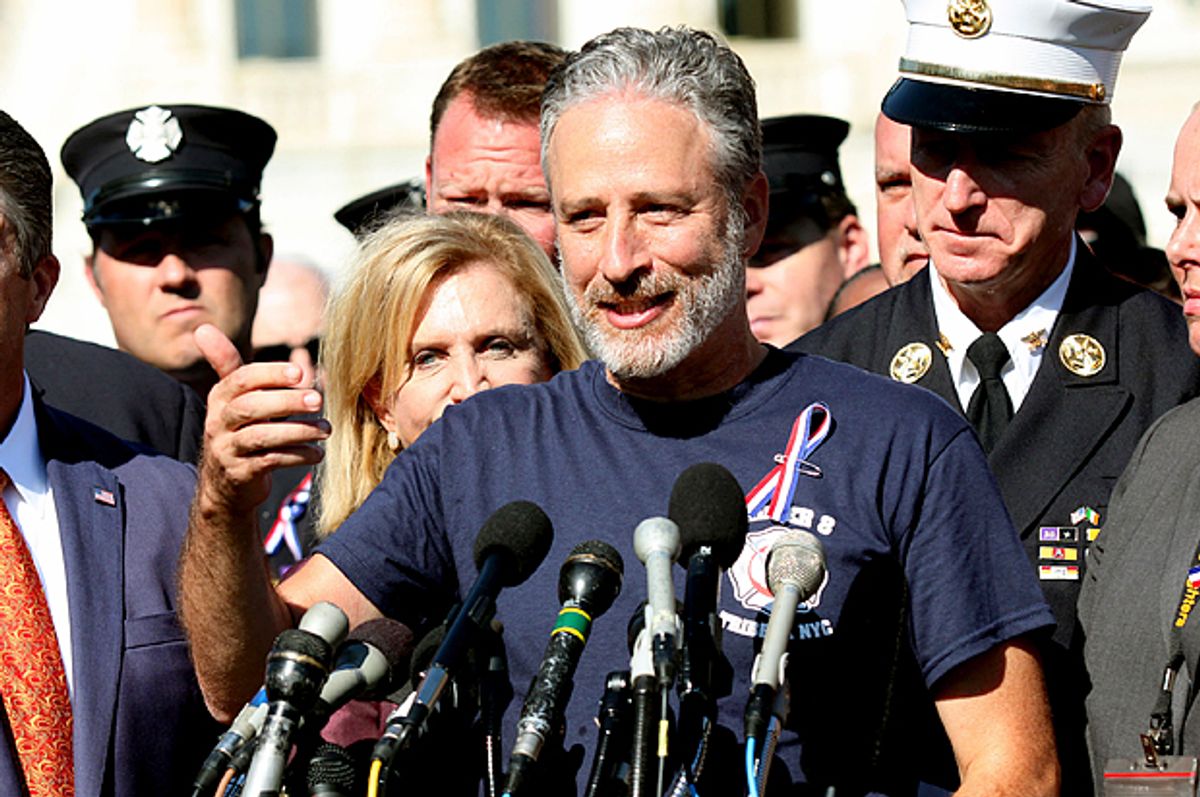 Just one day after 14 people in San Bernardino, California, were murdered by terrorists armed with assault rifles, the United States Senate voted on a bill that would have allowed the attorney general to deny the sale or transfer of a firearm to anyone on the terrorist watch list. If you knew nothing about our nation’s politics on gun ownership, you would be forgiven for assuming that a bill like this would pass on an uncontested, unanimous vote. There is universal condemnation of terrorism, and it would seem utter common sense to try to prevent terrorists from acquiring weapons designed to kill scores of people within seconds. One poll of North Carolina Republicans put support in favor of the measure at 86 percent.

A casual observer would have been shocked to learn that not only did the bill fail, it didn’t even garner close to the votes needed for passage. Only 45 senators voted for the measure, with one Democrat and one Republican voting opposite their party’s traditional stances on gun rights.

Even if you think the “deny potential terrorists assault rifles” bill was largely political theater, it’s important to remember that such theater usually ends with Congress going along with the script. Deceptively edited videos of Planned Parenthood workers nearly force a shutdown of the entire federal government, widespread fraud at VA hospitals creates a media firestorm and results in bipartisan reform, and 9/11 rescue workers get healthcare benefits only after Jon Stewart shames politicians into voting for it. Again, you may think that there are policy reasons against using the terrorist watch list to determine who can or cannot own a firearm, but far more flawed legislation has sailed through Congress on the strength of a national tragedy.

This is not the case with mass murder perpetrated by terrorists with assault rifles. Congress will mobilize to create agencies and departments to address the threat of terrorism, it will authorize unfettered mass surveillance of Americans’ emails and cellphone conversations, and it will send hundreds of thousands of Americans across the world to fight and potentially die to prevent any further attacks at home. Congress will even forgo obvious concerns of constitutionality, as was the case with the original Patriot Act. But when Congress is faced with the demand that the individual’s interest in owning a firearm be balanced against society’s interest in protecting itself from continual and routine mass murder, Congress will not bat an eye, even when first-graders are purposely targeted and murdered at their schools.

To blame all of Congress, though, would be misguided. While in the past rural Democrats tended to support gun rights measures, the Democratic Party as a whole has united in emphasizing greater regulation and oversight of gun sales and ownership. Those in Congress who would erect no further barriers to potentially dangerous individuals attempting to buy assault rifles are now near universally Republican.

The question thus becomes, why? The most obvious answer would seem to be the toxic mix of gun lobbies like the NRA and a well-organized base of gun rights supporters. With plenty of funding and logistical support, they exert a level of pressure on Republican members of Congress that few other lobbies can match. But lobbies and activists are not gods, and they are ultimately only as effective as the elected representatives who decide to play along.

Indeed, congressional Republicans know very well that for every poll showing that 80 percent or more of Americans approve of universal background checks, there’s another saying that the majority of Americans oppose stricter gun laws. As a whole, Americans have not made up their minds as to whether we need more or fewer guns in order to reduce gun violence, even if the rest of the developed world figured out the correct answer decades ago. As Adam Gopnik of the New Yorker put it in the aftermath of Sandy Hook:

On gun violence and how to end it, the facts are all in, the evidence is clear, the truth there for all who care to know it—indeed, a global consensus is in place, which, in disbelief and now in disgust, the planet waits for us to join. Those who fight against gun control, actively or passively, with a shrug of helplessness, are dooming more kids to horrible deaths and more parents to unspeakable grief just as surely as are those who fight against pediatric medicine or childhood vaccination. It’s really, and inarguably, just as simple as that.

More important, congressional Republicans know that there is a big difference between what voters tell pollsters and what voters end up doing about it. Even Republican voters who would like to see some kind of tightening of access to assault rifles aren’t likely to organize together to put political pressure on their representatives.

This is where the paradigm breaks down. It’s no longer about the NRA or gun activists or Republican voters who might want to make it harder to buy an assault rifle but don’t end up mobilizing. It’s about individual congressional Republicans making an active policy choice to allow individuals deemed so dangerous they cannot be allowed on a plane (even after passing through an airport’s physical security checkpoint) to easily purchase assault rifles and semi-automatic handguns.

Again, there are flaws—perhaps even constitutional concerns—with using the terrorist watch list as the basis for such restrictions, but that is simply a question of due process. There is no doubt that Congress possesses the power to prevent individuals who pose a demonstrable threat of committing mass murder from acquiring an assault rifle. To assert otherwise is to believe in a right so broad that even our easily bypassed nationwide background check system should be struck down as unconstitutional. The right to own an assault rifle would be absolute, a right beyond all other rights.

This is why political observers of all backgrounds do this nation a great disservice when they inaccurately diagnose who ultimately has the power to dramatically reduce the number of mass shootings in America. The immediate reason we endure more mass shootings (even per capita) than other industrialized nations is because we allow mass shooters far easier access to weapons of mass murder. The individuals who ultimately favor such active policy choices are today’s congressional Republicans. It may be more satisfying to blame the NRA or even those who tacitly agree that instant, universal access to every kind of firearm imaginable is worth 30,000 dead Americans every year. But special interests and activist sentiment run their course through every heated issue in American politics. Guns may reach the apex of the immutable laws of politics, but they do not transcend them. Eventually, it comes down to a single legislator’s decision.

There is nowhere else to place responsibility. States and localities can tinker at the margins with their own forms of gun regulation, but that’s like telling the state of Kentucky to prevent the sale and distribution of cheap heroin all on its own. And while we may be able to out-innovate the problem of gun violence with smart gun technology, government will ultimately have to require such technology to some degree, such as with the adoption of seat belts and air bags. There is no substitute for concerted national action on the issue of mass murder perpetrated with firearms available upon demand, and such action will only take place when a handful of congressional Republicans deem it fit.

What makes this so distressing is that it’s hard to imagine just how many Americans would have to die from gun violence in order to change the outlook of even a small minority of congressional Republicans. Even if next year the number of Americans who were killed by guns were to quadruple, congressional Republicans would simply double down on the pervasive logic that even more guns are needed in the hands of good people to combat the bad people with guns. When people start with a conclusion and work their way backwards to policy responses, the system breaks down. You cannot cure a disease that you fail to properly diagnose. As Adam Gopnik would say, it is as simple as that.

As a kid, I took riflery classes in West Virginia and could understand why people thought of the single-bullet .22 rifles we fired as tools. As an adult, I once went to a shooting range to fire a semi-automatic handgun, and I was struck at how— ergonomically—a handgun was simply a vessel for shooting oneself and someone physically close to you. Today, I look at an assault rifle, and it is obvious that its chief, intended purpose is the killing of a cluster of human beings otherwise unable to protect themselves in time.

Only when a small but determined band of congressional Republicans are able to articulate something similar to the above will we begin the long and arduous process of treating an American’s God-given right to life and the pursuit of happiness with the same respect that we treat the oft-misconstrued right to own a semi-automatic firearm.