Odell Beckham and the NFL's fear of gay men: "Football is the most homophobic subculture this side of the Westboro Baptist Church"

New York Giants star blames gay slurs for losing control on field. Because in the NFL, there's still nothing worse 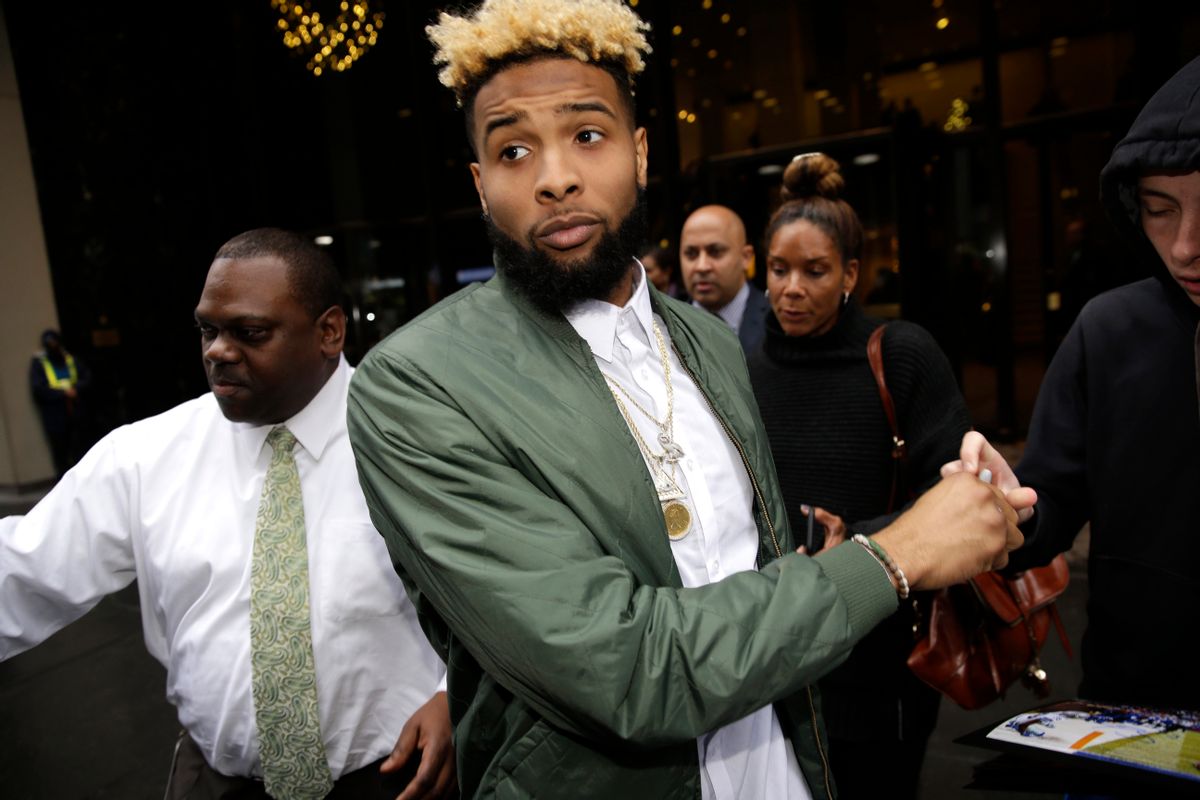 Last Sunday, the New York Giants star wide receiver Odell Beckham Jr. lost his composure quite publicly in the team’s loss to the Carolina Panthers. He attacked his defender, Josh Norman, in a manner best described as weaponized helmet assault, and was eventually suspended for a game by the NFL.

Beckham has suggested, through proxies, a plausible motive for his nutter: various Panthers hurled gay slurs at him.

Because if there’s one thing that justifies a pro football player going crazy on national TV—at least in the eyes of other football players and fans—it’s being called a faggot.

And why might that be? Maybe because football is the most homophobic subculture this side of the Westboro Baptist Church?

Think about it, folks: the entire football universe freaked out last season at the mere prospect of welcoming its first openly gay player, Michael Sam.

Of course, nobody ever just comes right out and says, “football hates fags.” Instead, players and sports pundits speak in a familiar code.

For some reason, everybody goes after him with gay slurs. He’s a different kind of dude. He has the hairdo out, he’s not the big muscular kind of dude. The ladies all love him. He’s a star. I wonder why people are going in that direction. It blows my mind. I told him he can’t let stuff that people say get to you.

Translation: the fact that Beckham bleaches his hair and doesn’t have big muscles puts his heterosexuality in doubt, which is why he gets called a faggot all the time. But he has sex with lots of “ladies,” which makes him totally legit, so he shouldn’t worry about it.

Beckham’s own teammate, punter Brad Wing, offered the same brand of frat boy logic. He hinted that a photo of Beckham embracing a former LSU teammate may have triggered rumors of his homosexuality, then went on to elaborate that Beckham “was kind of actually happy about it, because all the girls he’s messing around with weren’t fighting with each other anymore.”

Got that? If, as an NFL player, you hug another man, you’re under suspicion as a homo—until such a time as a teammate can vouch for your heterosexual promiscuity.

Officially, of course, the league condemns all forms of discrimination. But football is, and always has been, a cult of hyper-masculinity. It’s a realm in which the attitudes around gender and orientation aren’t just out of date. They’re medieval. Men are defined as big, strong, violent, physically courageous warriors. Women are defined as sexual hood ornaments. Homosexuals aren’t just abhorrent, they’re aberrant, betrayers of the given order.

Think about it this way: dozens of NFL players have been accused of rape, or domestic abuse, or even animal abuse stemming from dog fighting. None of their teammates are expected to experience existential anguish when these guys rejoin the league. Nobody says, “Geez, is the NFL really ready for a violent criminal?”

And why would they? Violent transactions—of the sort that would be illegal in any other context—are the profit center of pro football.

Every now and again, of course, some player will be foolish enough to express his honest feelings toward homosexuality. At which point the rest of the football world will loudly revile them.

That’s what happened to San Francisco 49er Chris Culliver two years ago, when he was asked about Ravens defensive tackle Brendan Ayanbadejo, a vocal advocate for LGBT equality.

“I don’t do the gay guys man,” Culliver told a local radio host. “I don’t do that. No, we don’t got no gay people on the team, they gotta get up out of here if they do … Can’t be with that sweet stuff. Nah…can’t be…in the locker room man. Nah.”

If you want an even more revelatory peek inside the sanctum of an NFL locker-room, take a look at the so-called Wells Report, which was prepared, at the NFL’s request, to investigate the locker-room bullying that led a Miami Dolphins offensive lineman named Jonathan Martin to quit the team in the middle of the 2013 season and check into a hospital for psychological treatment.

Back when this news broke, much was made of the racist invective used by Richie Incognito, the white bullying ringleader, against Martin, who is bi-racial. What got overlooked was the overt sexual nature of the harassment.

Incognito, for instance, made numerous vulgar comments about Martin’s mother and his sister, a medical student he had never met. “I’m going to bang the shit out of her,” he explained, “and spit on her and treat her like shit.”

Such grab-ass hijinks are typical of locker rooms, where internal homoerotic anxieties often get projected onto suitable victims.

Which is what makes Incognito’s targeting of Martin so fascinating. Based on the record, it seems to stem, at least in part, from Incognito’s forbidden feelings of affection for Martin, whom he calls (without apparent irony) “my bitch.”

The Wells Report describes the two as inseparable. They exchanged 13,000 text messages in the course of their fourteen-month relationship, or nearly 30 per day. They sought each other out “at all hours of the day or night” and discussed “the intimate details of their sex lives, often in graphic terms.”

When Martin declined Incognito’s offers to hang out, Incognito reacted like a spurned lover. At one point, Incognito pressured Martin to vacation with him in Las Vegas. This text exchange caused Martin to back out:

Incognito: Don’t blame ur gay tendancies on [Player A]

Martin: I’m gonna get more bitches in 2 nights than all of you combined

Incognito: Stop it. By bitches u mean cocks in ur mouth

Incognito: I’m going to shit in ur eye

What’s almost touching about the Wells Report is the tenderness that bleeds through all the profane banter. “Let’s get weird tonight,” Incognito wrote to Martin, at one point. And a bit later, “What’s up pussy? I love u.”

Even after Martin left the team, the two texted. “I miss us,” Incognito wrote.

The Dolphins eventually fired Incognito. But he was never ostracized by teammates. Just the opposite. He was a popular player, a guy seen by many of his brethren as the victim of a politically correct witch-hunt.

Within the culture of the NFL, teasing dudes for being gay isn’t some radical act. It’s part of the whole juvenile male gestalt.

After a season and a half out of the game, Incognito was signed by the Buffalo Bills, for whom he played this season, and made the Pro Bowl.

Which brings us back to Odell Beckham, who is definitely not gay, even if he has a funny hairdo and a slender physique, because he has sex with lots of women.

Fans have every right to love football for its many merits. It’s a thrilling game that showcases astonishing feats of grace and valor. But gay and female fans shouldn’t delude themselves. To many of their heroes, the only thing worse than being called a pussy is being called a faggot.