Ted Cruz and others love to talk of radical Islamists and World War III. They speak less of the Saudi royal family 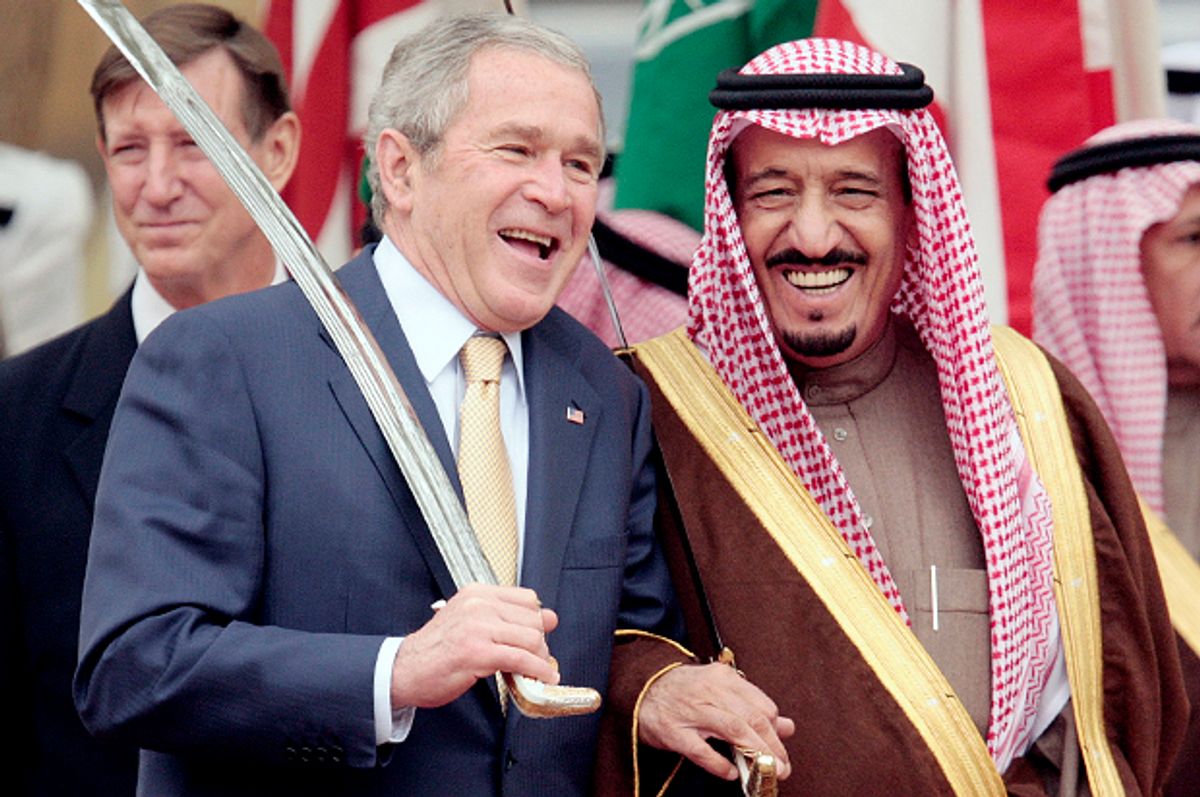 Although it is difficult to quantify, it is reasonable to conclude that Americans are the most frightened people on the planet.

The Republican candidates for president spent three hours in the most recent debate discussing how to deal with the “existential threat” of ISIS – a group that, at point of writing, has not attacked the United States nor shown any signs of attacking the United States. The ruthless murderers in San Bernardino, according to the FBI, had no affiliation with ISIS, but only supported their demented and destructive ideology.

Even so, several candidates, in reaction to the massacre, openly used the phrase “World War Three,” while others discussed the group of evil barbarians as if they had invaded New York and were marching toward D.C. as they spoke. Donald Trump and Ted Cruz are not exactly the equivalent of Winston Churchill, and the American people, who panic on command, are not particularly resilient. Ernest Hemingway defined courage as “grace under pressure.” American politicians, and the Americans who empower them, are currently failing to act with grace while under no pressure. One could only imagine the nightmare of chaos and hysterics that awaits should ISIS actually attack.

Senator Ted Cruz left no room for interpretation when he pounded the podium to announce that the “biggest threat we face is radical Islamic terrorism.” Fear of terrorism dominates the discourse.

Any time a conversation about terrorism begins in a political debate or on cable news, there is not an elephant, but an unacknowledged gas-guzzling sports utility vehicle in the room that exposes the utter hypocrisy and insincerity of America’s declaration of war on “radical Islam.”

One of America’s closest allies is Saudi Arabia. The alliance is mostly a one-way relationship in which the United States is subservient and obsequious – essentially a harem to the Saudi royal family, who collect all the benefits and rewards.

Saudi Arabia is the country most responsible for the rise of radical Islam, and the largest benefactor to Islamic terrorist organizations. According to multiple sources of American intelligence and Indian intelligence, the Saudis have spent billions to build mosques, madrasas and cultural centers dedicated to the promotion of Wahhabism – the small but growing sect of Islam insistent on literal interpretation of the Quran, and violent jihad.

Robert Baer, a retired CIA officer and author of "Sleeping With The Devil: How Washington Sold our Soul for Saudi Crude," has diagnosed the disease of America’s selective and insincere outrage against Islamic terrorism: “Saudi Arabia has accelerated Islamic fundamentalism to the point that Saudi Arabia, or at least, powerful people in Saudi Arabia, have become an enemy of the United States.”

That enemy revealed itself on September 11, 2001, when 19 hijackers, 15 of whom were Saudis, successfully launched the worst attack on U.S. soil in the history of the country. Former Senator Bob Graham has strong reason to believe the Saudi connection was not mere coincidence or superficially ethnic. In two separate sworn statements, the former senator explained that, according to the intelligence he reviewed as chairman of the Senate Intelligence Committee, it is likely that Saudi officials provided aid and comfort to the terrorists responsible for the 9/11 atrocity.

The FBI not only refuses to disclose the information they discovered about possible Saudi connections to terrorism against the United States, but willfully obfuscates the truth. Graham alleges that “the FBI has gone beyond just covering up, trying to avoid disclosure, into what I call aggressive deception.”

Prominent politicians and pundits strike their best warrior pose from the safety of Senate chambers and cable news studios, claiming that America is “at war with radical Islam,” yet none of them – from Bill O’Reilly to Ted Cruz – mention Saudi Arabia. America’s political leadership, with the exception of Graham and few others, shows no interest in seeking out justice for the 9/11 victims, and accountability for the murderers, by exploring the credible leads of Saudi support.

Donald Trump enjoys referencing that ISIS regularly “cuts the heads off of Christians,” but the Saudi record of human rights violation is hardly any better than the Islamic State. Adultery, apostasy and sorcery are crimes that carry the penalty of decapitation in Saudi Arabia. Executioners are having a particularly busy year there. Al Jazeera recently reported that in 2015 the Saudis have hit a 20-year high in the number of public beheadings. Among those sentenced to beheading is a teenager whose list of offenses included “demonstrating against the government.”

In none of this year’s Republican or Democratic debates has a single candidate offered any disapproval for the brutality and barbarity of Saudi’s routine abuse, torture and murder of foreign nationals and its own citizens.

Baer gives insight into the hypocrisy and inconsistency with the subtitle to his book. Saudi Arabia controls 25 percent of the world’s oil. Given the Saudi's influence over oil production, they also have an uncanny ability to manipulate the oil market. Mike Lofgren, who spent 20 years as a high-level staffer for various Republican senators, explains that “Saudi’s deep complicity in terrorism gets a nevermind from the State” because of its production of fossil fuels, but also because of its purchase of U.S. Treasuries and weapons.

The realpolitik of dollars and cents, commerce, and energy make a laughingstock out of the child’s-play politics of public debates, speeches and posturing for votes.

The delicate and deferential treatment of the Saudi kingdom by American officials should disabuse anyone of the precious notion that a “clash of civilizations” exists between liberal democracy and Islamic fundamentalism, or that any candidate for president is serious about waging war against “radical Islam.” That is unless they are genuine about defeating radical Islam, with the exception of the largest single supplier and supporter of it.

In January of 2015, Saudi King Abdullah died. President Obama shortened an official visit with India to attend the funeral. John Kerry, John McCain, Nancy Pelosi and Condoleezza Rice joined him: a rare moment of bipartisanship to honor the life of a vicious opponent of human rights, and a generous friend of Islamic fundamentalism.