The GOP has become the party from George Orwell's nightmares

Between the nascent fascism and the preponderance of doublespeak, could it be any more clear? 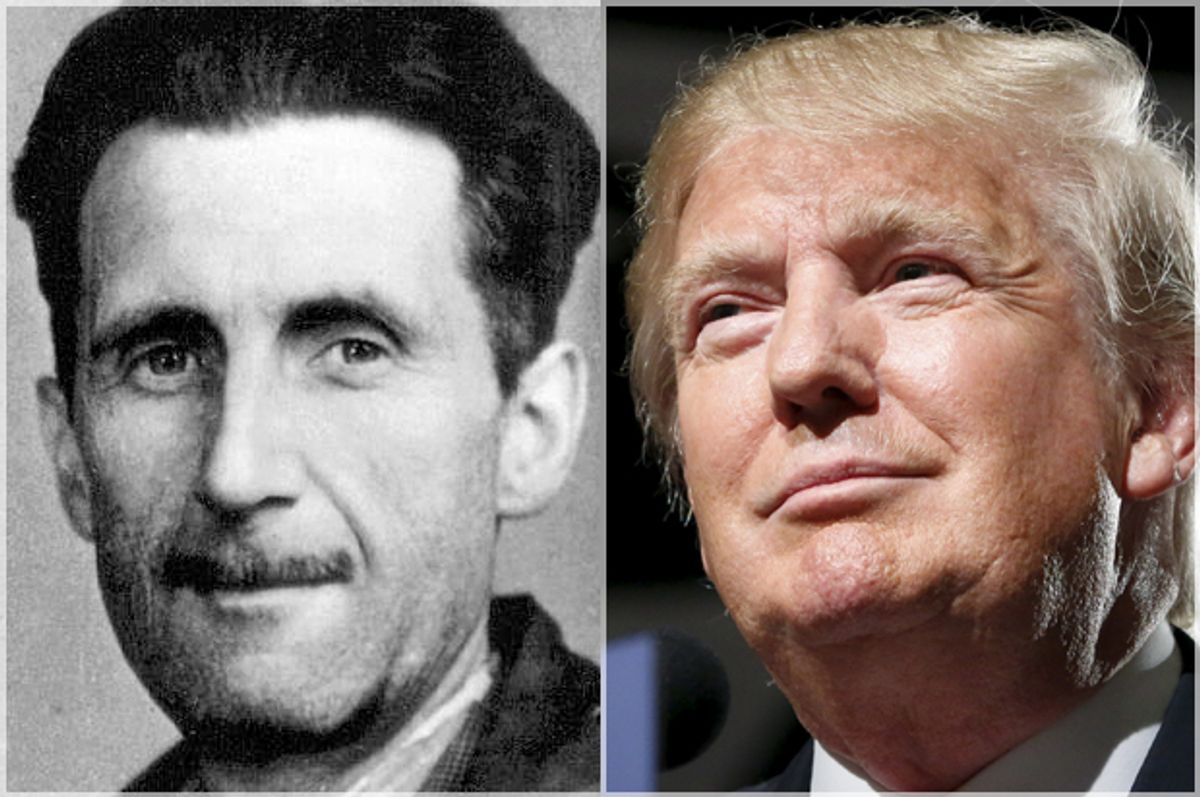 In a recent column by Dana Milbank, the Washington Post columnist addresses what has become the ultimate straw man for Republican presidential candidates this year. Ever since Donald Trump dodged Megyn Kelly’s question on his derogatory comments about women at the first debate with his declaration that “the big problem this country has is being politically correct,” political correctness has been the go-to boogeyman for the entire field of GOP candidates. Whenever challenged on controversial or offensive comments, political correctness is to blame. Whenever the media fact-checks a statement, political correctness and that other boogeyman, “liberal media bias,” is to blame -- and not their factually challenged statements.

“Once a pejorative term applied to liberals’ determination not to offend any ethnic or other identity group, it now is used lazily by some conservatives to label everything classified under “that with which I disagree.” GOP candidates are now using the “politically correct” label to shut down debate — exactly what conservatives complained politically correct liberals were doing in the first place.”

When an entire field of candidates tend to thrive on bullshit (especially the current front-runners), it is not at all surprising that they have certain reliable terms that vilify critics of their bullshit and shut down debate. The truth is, Republicans have long utilized a manipulative phraseology, full of euphemisms and doublespeak, used either to shut down criticism and debate, as shown above, or to acerbate the listener’s emotional state -- think “baby parts” and “death panels” -- or provide a positive light on something that is generally frowned upon. (Ergo: Tax-avoiding billionaires become “job-creators.”) The GOP has become truly masterful at distorting political discussion through language, and at each Republican debate, just about every candidate showcases this manipulation. In George Orwell’s classic essay on this subject, “Politics and the English Language,” he seems to describe modern Republicans to a tee, repeating the same tired, yet convenient phrases (the phrases have changed, of course). Orwell writes:

“When one watches some tired hack on the platform mechanically repeating the familiar phrases -- bestial, atrocities, iron heel, bloodstained tyranny, free peoples of the world, stand shoulder to shoulder -- one often has the curious feeling that one is not watching a live human being but some kind of dummy: a feeling which suddenly becomes stronger at moments when the light catches the speaker’s spectacles and turns them into blank discs which seem to have no eyes behind them. And this is not altogether fanciful. A speaker who uses that kind of phraseology has gone some distance towards turning himself into a machine.”

In a country where getting elected to public office requires massive amounts of private funding (“bribery” has become “donation”), is it really so shocking that the majority of politicians resemble machines? Republicans (and many Democrats) have become appendages of the corporate state apparatus, serving the interests of private industry before even considering the interests of the people. Of course, the United States is still technically a “Democratic Republic,” and politicians must at the very least put on a show and act like they serve the people. Creating a new lingo used to purposely deceive the people, full of enough euphemisms and phrases to fill up a dictionary, has been quite beneficial. Just to name a few of the most popular: “energy exploration” for oil drilling, “job-creators” for capitalists, “right to work” for anti-union laws, “trickle down economics” for tax cuts for the rich, “death tax” for an estate tax, “job-killing” for tax increases on the rich or corporations (or cracking down on corporate tax avoidance, for that matter), and so on.

The Republican Party has become the Orwellian party, and Fox News’ Frank Luntz is perhaps the most notorious GOP spin-doctor. “[Politicians] are living, breathing embodiments of the language they use,” said Luntz during an NPR interview. “When you're selling a product or service it doesn't have to be absolutely perfect. When you're a politician, one wrong word changes the ... meaning of something.”

When it comes down to it, Donald Trump (who called Luntz a “low class slob” for supposedly picking “anti-Trump panels” after the infamous Fox News debate) has done us all a favor for being so blatantly dishonest. It is actually refreshing to see a Republican politician distort the truth without the usual duplicity. Trump is a complete bullshit artist, but not in the usual mechanical way that we typically see from other politicians. Indeed, this is one of the qualities that has made him so popular (and unpopular), and his dishonesty has been contagious. Other GOP candidates have quickly jumped on the bullshit bandwagon, and as PolitiFact rulings reveal, the more dishonest the GOP candidate is, the more successful he or she becomes.

It was only a matter of time until the lies and distortions caught up with Republicans. The party has built its modern platform on deception, and has carefully crafted an entire phraseology to back it up. But there is no amount of spin that can make Trump look honest. And Trump is, after all, the new face of the GOP.