The true triumph of "Transparent": The Pfeffermans are all of us

The Emmy-winning Amazon series may be the queerest show on TV, and that's not even the boldest thing about it 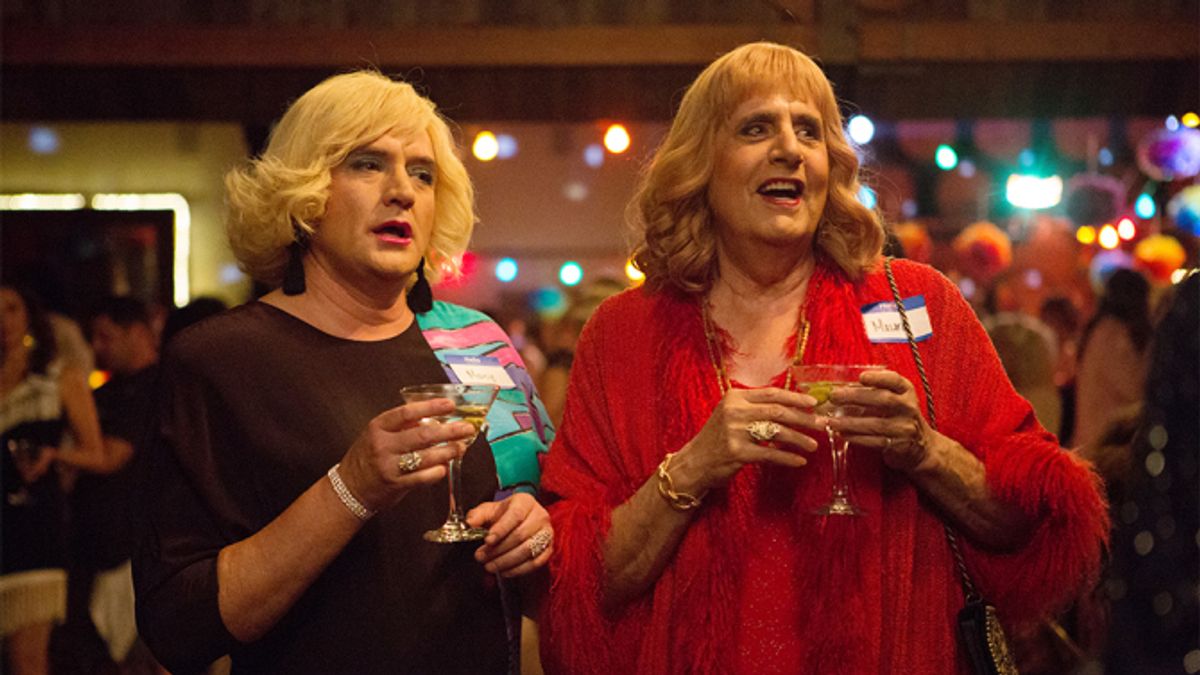 I used to take all the Buzzfeed quizzes—I couldn’t resist them, they were so silly. But I weaned myself from them for well over a year … until AfterEllen came along with one that was too irresistible to pass up: "Which Transparent character are you?" I mean, I had to know. Per their algorithm, would I be one of the queer Pfefferman women, like 40-something Sarah (Amy Landecker), who left her heteronormative life with a husband and kids, to pursue  … a possible heteronormative life with her old college girlfriend, Tammy (Melora Hardin)? Or like aimless, brilliant, charming Ali (Gaby Hoffmann), who is sleeping with her lovelorn best friend, Syd (Carrie Brownstein)? Or would I turn up as their Moppa, Maura (Jeffrey Tambor), currently without a place of her own, and dividing her time between the homes of her newly widowed ex-wife, Shelly (Judith Light), who is still in love with her, and that of her new trans friend, Davina (Alexandra Billings), who has become a kind of mentor to her?

More from DAME: "How Do You Know When It's Time to Break Up with a Friend?"

I had a hunch that, despite being a Jewish lesbian, I might not be a Pfefferman, but rather one who falls into the path of Pfeffermans. And indeed, according to AfterEllen, je suis Syd—which, as far as these quizzes go, feels quite accurate. Because more than once, I’ve been that woman: in love with a friend who wasn’t really straight, and got excited that she returned my affections, and then hurt when I realized she was trying to work through her own feelings about sexuality through sex with me. And I’ll tell you, it sucks being a Syd. And, for that matter, being a Tammy (annoying as Tammy is), ditched at the altar by the woman she thought she was building a future with. And being a Shelly, co-dependent on the ex-spouse who comes to her when she’s feeling untethered, only to leave when old marital dynamics threaten to set in. And a Davina, a fiftysomething trans woman with a brutal past, who'd generously taken Maura into her home and shared her hard-won wisdom, only to be condescended to about her choice of lovers.

There is no better show in existence—past or present—that unpacks female sexuality with such complexity and humanity, such fully realized, complicated characters, and as vivid, unique storytelling as Transparent. I, like so many friends of mine who devoured these ten episodes, were genuinely verklempt—I actually wept while watching this second season, was just held in awe by its raw honesty, especially when I considered that, with its five Emmys,Transparent would draw a bigger and presumably broader audience than ever. This season, creator Jill Soloway, together with her trans and cisgender female writers and directors, have outdone themselves, truly, creating something even queerer, edgier, Jewier, and more feminist than any show that has come before it.

We see sex scenes between septuagenarians, between trans and cisgender women including one (Anjelica Huston) who’s had a double-mastectomy from breast cancer. We go to a women’s music festival with Sarah and Ali and their Moppa—where Maura learns she’s unwelcome because she’s not a biological female. We watch Ali aggressively and amorously pursue Leslie, an older professor with whom she wants to study—a radical feminist lesbian poet based on Eileen Myles (played with perfect hot butch swagger by Cherry Jones; the real Eileen Myles has a small role as her colleague)—one to whom Moppa had been so arrogant and misogynist as a male political-science professor, she didn’t remember the cruelty Mort had exacted upon her as young university colleagues. A fact that Maura takes to heart—realizing that, as a woman, she still must reckon with her former male self. And we see Ali tease Syd, as her girlfriend, both physically—flashing her breast while sprawled on her chair, or taunting her with a strap-on, affectionately but unnervingly—and emotionally, as she pushes her desire to be polyamorous, when she knows Syd wants a monogamous relationship. And we watch a paranoid, unmoored Sarah come undone at a school function because she is certain that everyone has been gossiping about her about having left her husband for a woman, only to have ditched her, too—at their wedding.

More from DAME: "When Did the Internet Become Smarter than My Doctor?"

This is just a sampling, but a pointed one, because what I find to be boldest and most striking is not just the optics of sexual and gender boundaries being pushed, but the emotional ones. Because what is really happening here is a conversation about privilege and the repercussions when that privilege is used heedlessly. To watch these three Pfefferman women explore what their femaleness and sexuality/ies mean to them is extraordinary. But Soloway takes it a step further by revealing to us the toxicity of their narcissism. Yes, Tammy is brash and not very bright, but she’s been hurt and publicly humiliated by Sarah’s realization that she can’t stand her—at their wedding—and that the last thing she wants is to get married again. Of course that’s going to hurt like hell, and in fact long-sober Tammy falls off the wagon and starts drinking again, while Sarah quests to figure out who she is and what she wants. Sarah isn’t particularly apologetic about what she's inflicted upon Tammy, though.

And Ali is quite singularly focused on the thesis she wants to write for graduate school, specifically for Leslie—a queer family history gorgeously revealed in flashbacks to Nazi Germany—and at the moment, at least, believes, rather self-servingly, that being queer gives her automatic license to be sexually polyamorous whether or not Syd is okay with it (she’s so not okay with it).

Among the three, Maura appears to be the least cavalier, even as she’s hurt Davina—traipsing into her life, doling out unsolicited romantic advice, completely unmindful of their class differences and all that comes with it (i.e., the fact that Davina, a former sex worker, has had to save her hard-earned money for her breasts, while upper-middle-class Maura’s big question is whether she wants them at all). Still, she’s eager do some self-reflection—maybe not so much as an ex-spouse or even as a parent: she, together with Shelly (to whom she has a bit of unresolved business she could stand to work on), has betrayed their son in unspeakable ways. But as a person learning what it means to be a woman, as a woman who used to be a man, she wants to understand what it meant to be so deeply chauvinistic, so woman-hating, that it was a reflex.

More from DAME: "Nothing Says Holiday Cheer Quite Like a War on Women Christmas Card"

And that is the real triumph of Transparent—its transparency, its ability to really let us in and allow us to see the profoundly uncomfortable truths about how the Pfeffermans—and in turn, we—really are. That we are allowed to love and hate each of them, often in the same episode, sometimes even in the same moment. Yes, they’re narcissistic, and sometimes toxic and unfeeling. And sometimes they're charming and endearing and brilliant and we pull for them despite ourselves. But Maura, as we see especially this season, isn’t the only one who is in a transition in her life—they all are, and they’re fallible and they really step in shit of their own making. A lot. I feel for them because they are so human, even if they're not necessarily humane all the time. The fact is, we don’t have to love the Pfeffermans, though I find that I do, perhaps because they are recognizable to me. I know people like them, I’ve been involved with people like them, I am friends with people like them. And though AfterEllen says I’m a Syd, and I’ve been a Syd, I admit: Sometimes, I’ve been a Pfefferman, too.