From the Murphys on "The Leftovers" to "Master of None"'s brilliant Denise, these characters made our year 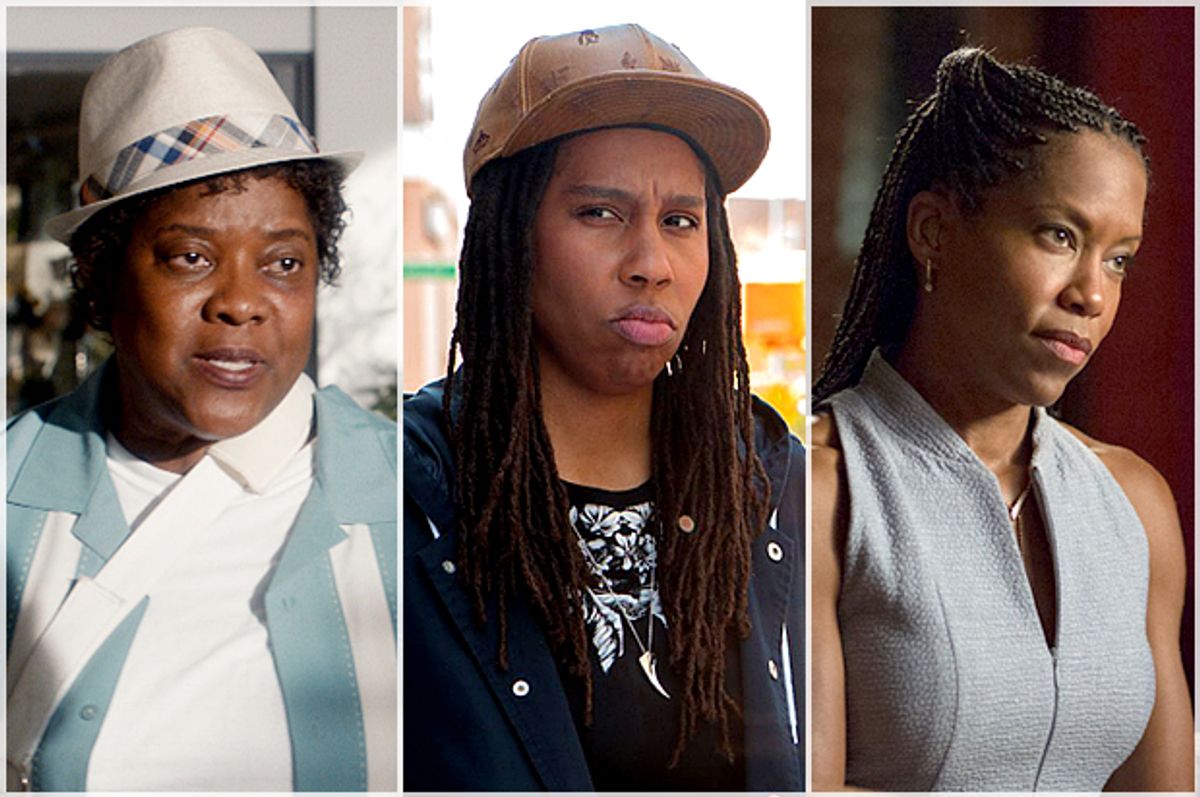 As you’ve likely already heard from all of the other TV writers and critics, this was a powerfully good year in television. In fact, this was such a great year for TV that if nothing else had happened, aside from "The Leftovers," "Transparent" and "You're the Worst," we could probably still call this one of the most important years in the history of television. That's saying something.

TV is getting better for a myriad reasons, one obvious being that the characters are getting better. Salon's own Sonia Saraiya chose eight unforgettable actors who stole the small screen this year and the internet continues to overflow with proclamations of favorites. One thing that definitely needs to be acknowledged is that 2015 marked the year when more black women characters than ever were presented with a little humanizing device we like to call "nuance." There were strong black women, weak black women, indifferent black women, mad, happy and kind black women. There were carefree black girls, militant black girls and respectable black girls. But the most exciting part was watching so many characters fluctuate between one, and another, and another—to the point where such labels were often nonexistent. Call it the moment of the indefinable black woman character—one who resists labels as deftly as any white male anti-hero of the Golden Age. That these women dominated so many great shows this year is, of course, not just a win for black women and women of color. It signifies another collective, creative voice crying out to the wilderness and demanding the nuanced approach to all people—those fictionalized and those who exist in real life. Here are my choices for the five black women who profoundly changed TV in 2015.

1. Regina King as Erika Murphy on “The Leftovers”

When the Murphys were first introduced at the start of season two, it was unclear whether or not the matriarch of the family would receive the same treatment as other cast members. While it was pleasant to see Regina King on the screen (as critics are now almost unanimously agreeing is always the case), Erika could have easily been written (and likely would have, on another show) as the supportive wife of a headstrong and slightly terrifying husband. But all such concerns dissipated with one of the season’s best episodes, “Lens,” where King faced off against Carrie Coon’s Nora Durst and devastating secrets about her character were revealed. Erika Murphy was not rendered a villain, but her story was complicated when she confessed to a plan to leave her husband and her children behind. Women—and especially black women—are still written from a viewpoint where womanhood is synonymous with nurturing and caregiving. It’s no small thing that a black woman character—a doctor, no less—with a seemingly strong family unit lays out her plan to abandon that family. And still, the writers refused to pin Murphy down, as she went on to become one of the characters who brought out so much of the emotion in the much-lauded finale, “I Live Here Now.” Everything about Erika—her work, her family, her beliefs, her rituals, and even her disability as a hearing-impaired person—always felt authentic and important to the character. Most importantly, every detail always felt like another critically necessary piece to the complex tapestry that made up the show’s greater narrative and the grander themes of grief, loss and struggle that made up the season.

2. Lena Waithe as Denise on “Master of None”

A gay black woman playing a gay black woman should not be so groundbreaking, but alas—we still have quite a ways to go. And Lena Waithe is doing her part both on and off screen (she’s the creator behind Showtime’s forthcoming Chicago-set drama) to speed up the pace of the necessary blackening (not to be confused with “The Sickening”) of this golden age. It’s true that, after the world devoured Aziz Ansari’s Netflix series, Denise became a bit of a pop culture phenomena herself. But what was most exciting to me about her character was that we never believed that she was really acting. Although her lines were clearly written for her character, they were always exceptionally believable. This was true for much of the cast—especially Ansari’s Dev and Eric Wareheim’s Arnold—but the language Denise used always felt natural coming out of her mouth. I’ve written about how much the series excelled at the smallest, micro-moments of comedy, and Denise’s character played a big role in that. One of the strongest examples I can think of is her use of “redbone” in one episode to describe Carla, the woman she’s hoping to take home from a work event. She briefly explains to Dev that “redbone” is a word to describe a light-skinned black woman, but then has to explain that it’s not the same as “caramel.” The conversation is brief, hilarious and thrilling to watch—Waithe doesn’t force the humor and casually dismisses her friend moments later so she can prepare Carla for an upcoming “adventure with Denise.” She’s one of the first black women characters who I cannot compare to anyone—black, white, man, woman or anything else—on TV. Her style, presence, and presentation are so specific to her, and as a result she became an essential element in Dev’s ragtag band of friends, and a necessary voice on the series.

3. Viola Davis as Annalise Keating on “How To Get Away with Murder”

As the lead character on the ABC drama, Davis’ Keating stands apart from these other women and, of course, speaks to the need for more black female leads. She is the first queer, black, female anti-hero, and as cliché as it sounds, it’s exciting to think about the doors such a character opens up. This season with the introduction of Famke Janssen’s Eve, it became clear that the series was not interested in pinning Keating down, in terms of sexual preference. More importantly, her sexuality—though front and center—remains just one of many talking points about the protagonist. Viewers are more invested in her actual character make-up, in trying to unpack the mysteries that define her. Two seasons in and we still don’t know if she’s good, bad, or indifferent to the people around her. That Keating resists so many labels and still seems completely believable and, oftentimes, admirable is proof of her anti-hero status. That she’s alone in a sea of whiteness is proof that we have every reason to keep demanding more.

This season Jill Soloway’s “Transparent” features a groundbreaking scene (one of many) wherein an older woman has an orgasmic experience the likes of which TV has never seen. In fact, the entire season seems more invested in the sexual lives of very grown people. I’d say the episode “Flicky-Flicky, Thump-Thump” was the most wonderfully shocking thing I’d seen on TV this year, but that wouldn’t be fair to Cassie Calloway. With “Survivor’s Remorse,” showrunner Mike O’Malley has been trafficking in bold and brilliantly written women characters since the first season. But season two took things up a notch, with multiple storylines that centered on the matriarch of the household. The half-hour comedy is centered on Jessie Usher’s Cam Calloway, a basketball star, and Cassie is another character who could have been merely relegated to “supportive mom,” or even “supportive, foul-mouthed mom,” given the show’s unique brand of dialogue. Instead, Cassie received a legitimate sexual narrative this season, unlike anything else we’ve seen on TV. In other words, I’m fairly certain that she’s one of the first (if not the first) character, clearly playing the role of a mother (and very maternal... at times), to also have a vaginal rejuvenation. And this wasn’t just an offhand thing that happened for an occasional punchline. An entire episode revolved around it, so much so that one critic outed the series as, not a basketball drama or rags-to-riches comedy, but “a show about women’s reproductive health.” That an entire episode was dedicated to Cam’s mom’s vagina (and later episodes took on teen pregnancy and HPV (something we never hear about on TV, which is completely unrealistic given how much sex all of our favorite characters are having), may have felt too heavy-handed for some, but it brought out an important side to Cassie Calloway. This is because, in reality, these storylines are not just about sex, but about creating older characters who are still whole people, constantly looking to define and re-define themselves, and find love.

5. Loretta Devine as CeCe on “Being Mary Jane”

There cannot be a conversation about women on TV that does not include the women of Mara Brock Akil’s “Being Mary Jane.” Season three presented a black woman struggling with depression, women of color as members of the one percent, and complicated mothers—all of whom were written in a way that made it difficult to place them in a single box. And still, none of them subverted expectations as brilliantly as Loretta Devine’s CeCe. Devine, with her signature high-pitched, sweet-sounding voice is beloved for countless roles as the mother, grandmother or maternal figure in various films and TV guest spots. We had every reason to expect more of the same when she popped up as the victim of a car accident early on in the season, which is what made the reality of her character all the more exciting. Turns out CeCe, who was originally written as a man, is a gay, fedora-wearing, slick-talking extortionist out to steal from the one-percent for her own personal agenda (an agenda which is eventually revealed to be far more interesting than it originally appeared). Devine embodied this character so perfectly, she quickly negated all previous expectations of what she could and could not play. This is important because, it’s not just white audiences and TV executives who expect black characters to fit a certain mold. We as viewers accept the stories we’re told, and over time we too forget that there are countless characters who haven’t been created yet for black women. CeCe was a huge wake-up call to those of us who’d pegged Devine as a “type” because of her age, her appearance and even the vocal range we’d grown accustomed to over the years. “Being Mary Jane” offered up a not-so-gentle reminder that women of any color and any age can play, literally, any damn thing.