Best TV of 2015: The best scenes, one-liners, little details and single moments that defined the year

Off-script or live-on-camera, here’s what stood out this year 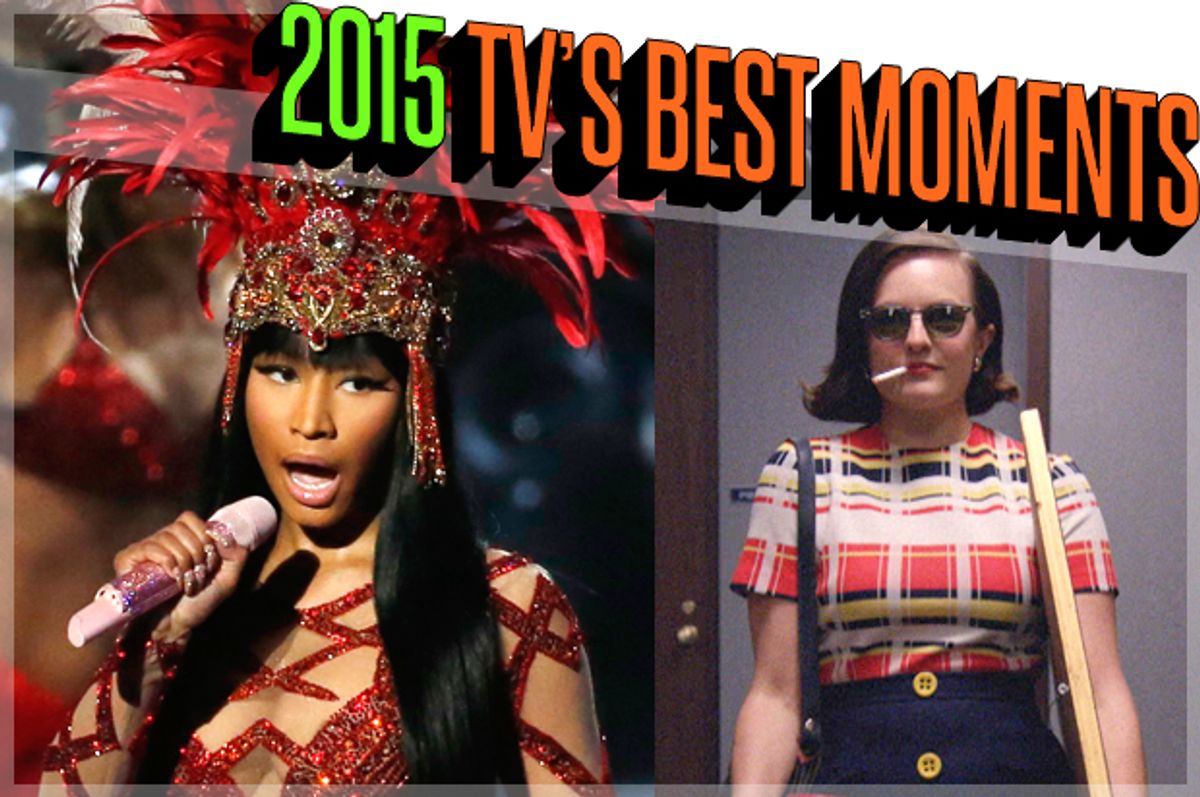 Next season, the show’s moving from New York City to Hollywood. The lipstick, we can only hope, will stick around.

This season of “Orange Is the New Black” had a lot of problems, but none of them were around “Black Cindy” (Adrienne C. Moore). The character starts out interested in Judaism because the kosher meals in Litchfield Penitentiary aren’t as rotten as the regular ones. But over the course of the season, she finds a real connection to the religion, and though her mikvah is just in the pond behind the prison, it feels just as triumphant as the most ritualized baptism.

“Great British Bake-Off” has been around for a few years now, but the countrywide enthusiasm for its latest season was so effusive that it spilled over across the pond, assisted by PBS broadcasting two seasons here in America. (Because “bake-off” is trademarked by Pillsbury, the stateside version, which is exactly the same, is called “Great British Baking Show.” ABC has since launched an American version, “Great Holiday Baking Show,” which is doing Christmas-themed stuff for six episodes this month. Part of what makes the show so wonderful is its stripped-down, un-splashy format, which takes so much adorable joy in the mixing of pastry dough and the flavoring of icing. But as Andy Dehnart observes, the core appeal of the franchise is veteran TV baker and judge Mary Berry, who is, to our American eyes, the most British woman that has ever lived. Her intensely critical eye, coupled with her real warmth for the contestants, is central to what makes the show so heartwarming and addictive—and ABC had the good sense to port her over to the American version.

5. The recurring Fisher Stevens bit on “Master of None”

“Mr. Robot” has a beautiful, rich world, and it’s all held together by E Corp, the mega-corporation that is like Apple, Google, Amazon and Microsoft combined. All the data, all the gadgets, and all the enterprise services make for a cloud, a banking system, and a cyber-infrastructure that Elliot can tear apart with shocking ease. If nothing else, “Mr. Robot” is quite an argument for antitrust legislation.

The incredible comedic reunion event series I didn’t even know I wanted.

One of the strangest things to ever occur on television, I hazard, is the real-life fallout of the six-episode HBO docuseries “The Jinx,” which, though muddled at times, produced one of the most purely astonishing televisual moments that I have ever experienced. The series followed the unsolved murders surrounding millionaire heir Robert Durst, who was connected to three corpses—but due to an expensive legal team and just enough track-covering, had never successfully been convicted. Filmmaker Andrew Jarecki went into Durst’s story from an unexpectedly personal angle—a New York real estate heir himself, Durst actually contacted Jarecki after Jarecki made a fictional film on the topic that attempted to explain why Durst might have done such a thing. Jarecki “liked the guy,” as he said in the documentary; it wasn’t until the end of production that they found two damning pieces of evidence. Both discoveries happen in real-time, on-camera. First, the filmmakers found an addressed envelope in Durst’s handwriting using the exact same block lettering and misspelling as a the letter sent by Susan Berman’s murderer to the police, which is chilling enough, in and of itself. But then there was a two-minute rambling monologue of Durst talking to himself, in the bathroom, after Jarecki shows him the envelope. He’s hiccupping and burping with anxiety, and blinking and shifting in his seat, and then on a live microphone the producers didn’t even know was on, he says: “What the hell did I do? Killed them all, of course.” Jarecki and Marc Smerling shape their miniseries in such a way that the confession, when it comes, hits like a dropped bomb; the following day, Smerling and Jarecki canceled all interviews with the press, because the FBI reopened the case against Durst. It was bizarre theater, and it unfolded right in front of us all; truly, a defining TV moment of the year.

Nicki Minaj’s epic put-down to MTV Video Music Awards host Miley Cyrus immediately became one of the most beautiful and deserved burns in pop culture history. I can only hope that this story will be told for years to come.

At the beginning of this year, the Kardashian-Jenner parent was mostly known for a messy, unresolved car accident and several famous daughters and stepdaughters. But in April, the former Olympian and current Republican announced a gender transition, and in July, introduced herself as Caitlyn on the cover of “Vanity Fair.” The change took place mostly on television, on three different programs — a “20/20” special with Diane Sawyer, which elegantly balanced on the fine line between explaining the transgender experience and honoring it; “I Am Cait,” a new E! show following Caitlyn’s new life; and of course, the Kardashian-Jenner flagship show, “Keeping Up With the Kardashians,” which aired a two-episode special about the daughters discussing and coming to terms with Caitlyn’s transition, and annexed Caitlyn’s celebrity to their own. Amazon Studios’ “Transparent,” which is about a transgender woman coming out in her 70s, eerily anticipated Caitlyn’s coming-out, as did “Orange Is the New Black’s" breakout star Laverne Cox and MSNBC’s anchor Janet Mock. But because Jenner was already mainstream—and, it should be noted, white and wealthy—Caitlyn became the figurehead for the transgender awareness movement. Her speech at the ESPYs was the real coming-out moment—a trans woman speaking to an overwhelmingly male and mainstream sports establishment. Ready or not, world, we now live in the post-Caitlyn era.

11. Peggy Olson walking into McCann-Erickson for the first time

12. “I will not be painted as the angry black woman”

The fourth season of Ben Affleck and Matt Damon’s “Project Greenlight,” a reality show about producing a film, returned to screen after several years’ hiatus—only to make those two men the unwitting villains, while line producer Effie Brown, who is black, became the center of the narrative. In the process of creating a mediocre film, Brown’s experiences with Damon, Affleck and, most of all, filmmaker Jason Mann, end up demonstrating with awful accuracy the widespread institutional bias against the contributions of black women in Hollywood. It’s complicated, but Brown stays incredibly buoyant throughout the proceedings, navigating what is at times an impossible and morale-shaking situation with deft humor—and making the audience love her, in the process.

If you didn’t know about Pablo Escobar before, you know too much, now.

“BoJack Horseman” introduced an owl named Wanda this season, voiced by Lisa Kudrow, who had been in a coma for 30 years and immediately became a TV executive. Of all the wonderful things about her, including delivering one of the best lines of the season (“You know, it's funny; when you look at someone through rose-colored glasses, all the red flags just look like flags”), she gets an amazing running joke: responding to every question with “Who?” Not every owl has the excuse of a coma to be asking the same question over and over again, but I’ll take it, in Wanda’s case.

Oh, for it is glorious.

16. “The Nightly Show With Larry Wilmore”

Comedian Larry Wilmore started his run on “The Nightly Show” at the very beginning of 2015, meaning that he’s just finishing up his first year on the job. There are still some kinks in the system—that panel can be really hit-or-miss, depending on the guests—but “The Nightly Show” has grown to be must-see-TV. At its center is, of course, Wilmore himself, who distinguishes himself by being one of the most confident and unflappable voices in late night. The host switches between modes—slightly detached professor, fed-up regular citizen, wry comedian, angry dad—with astonishing ease. And as a result “The Nightly Show” is easily the most fun and most educational late-night show on television.

17. Abbi dancing naked in her apartment in “Broad City”

Because, look, we’ve all been there.