The news since San Bernardino is more exaggerated, spectacular and bizarre than ever 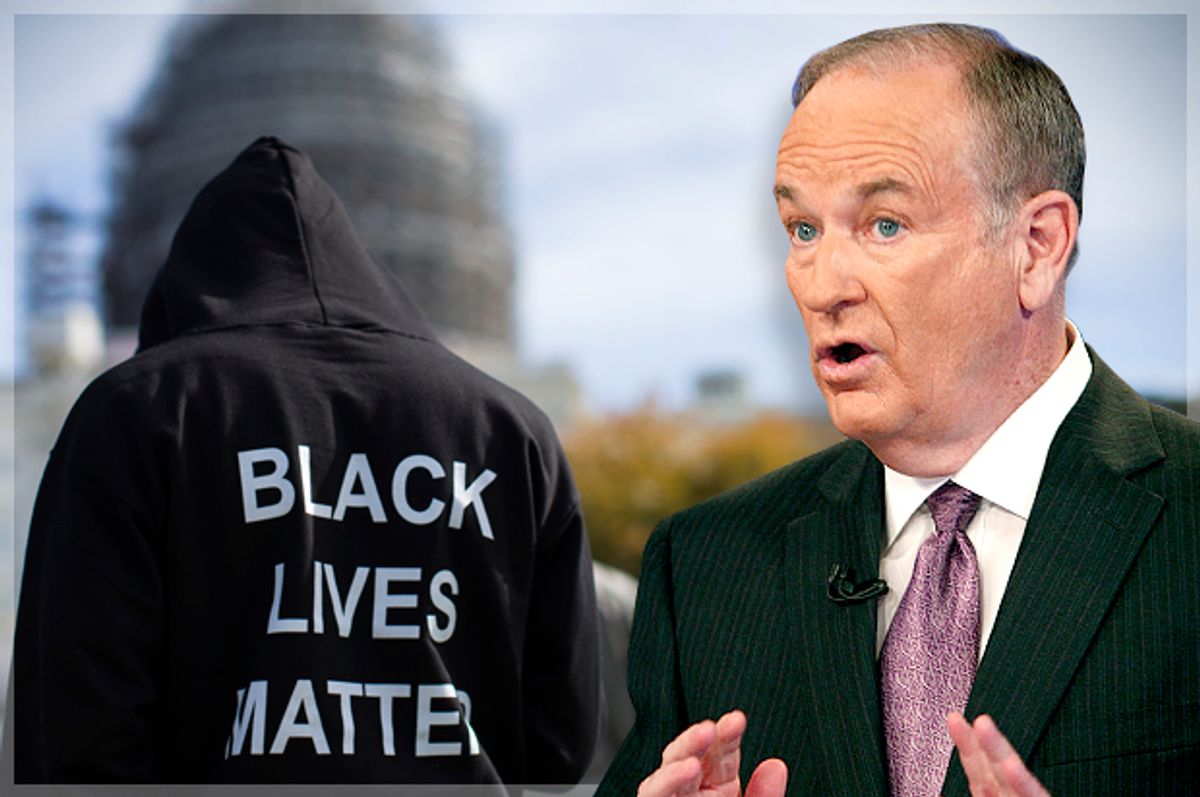 The news is a type of television genre. It features recurring characters, tropes and plot devices. The news also has narrative rules and conventions that influence how a given set of facts are presented to the viewers. These rules and conventions also limit the types of stories and facts that are discussed as well as the “spin” that is put on them. The television news genre is not neutral. It reinforces certain views and agendas while ignoring and/or misrepresenting others.

And as was seen with the San Bernardino mass shooting the 24/7 news cycle has taken these genre rules and made them even more exaggerated, spectacular and bizarre.

There were many different elements in how Fox News and the corporate media covered that horrific event. It was a story about “terrorism.” The media created drama and human pathos by talking to family members and survivors who offered their various accounts of the shooting. Experts were asked to repeatedly analyze the same information in different ways.

A heavily militarized police force was shown to be the heroes of the day. SWAT team members drove about San Bernardino in armored cars; they eventually engaged in a chase and gun battle with the suspects. Firefighters performed triage on wounded and dying victims in the streets. A volunteer doctor for the Inland Valley police SWAT team would be singled out for special attention because he was the first officer on the scene. He is a leading character in the drama—a man of healing who is also capable of lethal action.

“The cult of the first responders” was reinforced once again.

The antagonists were radicalized Muslims--a husband and wife duo of terror. Society’s stereotypes about feminine gentility and maternal nurturing were violated. Reporters were left wondering “what type of mother drops off her child with a relative before going to commit mass murder?” Syed Rizwan Farook and Tashfeen Malik were the monsters next door, a loving couple with a child, who were “living the American dream,” and unbeknownst to their friends and family, also secretly plotting mass murder in suburbia.

The narrative of the San Bernardino terror attack would reach a crescendo when the news media was allowed access to Syed Rizwan Farook and Tashfeen Malik’s apartment. This was a 21st century version of Al Capone’s secret vault. Geraldo Rivera was disappointed in 1986. Likewise, the news media would find nothing but the mundane clutter of life in an overpriced California apartment where two parents lived with their newborn child. There were no burning Bibles. Nor did the news media find ISIS jihadist action figures. The only sign that Syed Rizwan Farook and Tashfeen Malik were the dangerous alien “Muslim” boogeyman of 9/11 nightmares and Orientalist fantasies was a prayer rug in a corner amid some boxes.

The San Bernardino mass shooting was a multimedia event that borrowed from the aesthetic conventions and narrative rules of “true crime” docudramas, action movies and violent military-themed video games such as "Rainbow Six" and "Call of Duty."

In all, the corporate news media’s formula for covering the San Bernardino mass shooting terror event consisted of terrorism, fear, peril, heroic police and firefighters who are the perennial “good guys,” the blood of the innocent, and radical Islam pointing a dagger at the heart of “the homeland.”

This narrative does not stand alone. There are counter-narratives to the terror attack in California. They subvert how Islam is portrayed as the greatest threat to the United States in a moment when right-wing domestic terrorism is ascendant. It is also possible to read the San Bernardino mass shooting not only as a story about ISIS, but one where workplace anger and easy access to guns combined to kill 14 people.

The Black Lives Matter movement offers one of the most powerful counter-narratives to the valorization of America’s militarized police forces by the corporate news media.

As was seen in their coverage of the San Bernardino terror attack, the mainstream news media usually depicts the police as “wolf dogs” protecting “the sheep.” But, what happens when those police turn on and abuse a public they are supposed to serve and protect? The wolf dog is kind, gentle and reasonably well-behaved while it patrols White Suburbia. In contrast, when it sees people of color as enemies, and poor black and brown communities as a battlefield occupied by insurgents, that same wolf dog is often vicious and borderline rabid.

* Five San Francisco police surrounded a black man named Mario Woods. He was armed with a small knife. Witnesses recorded them shooting at Woods dozens of times. Mario Woods would die from his injuries.

* Miami Beach police were recorded shooting a man who was armed only with a razor. As shown in the video, the man was not threatening the police. The police were heavily armed with assault rifles and other weapons.

* Daniel Holtzclaw, a white Oklahoma City police officer, is on trial for allegedly raping 13 black women. He used his police power to violate these women’s bodies and personhood. In a perverse example of a racist and unfair criminal justice system that harkens back to Jim and Jane Crow era America, Daniel Holtzclaw’s jury is entirely white.

* The 12-year-old child Tamir Rice was shot within one second by Cleveland police. His “crime”? Tamir was playing in a park with a toy pellet gun. Despite statements of “self-defense” and the obligatory and predictable being “in fear of their lives,” medical experts have concluded that Tamir Rice had his hands in his pockets when he was shot and killed.

As hinted at by those few examples--which were selected from so many more--there is a profound disconnect between how the mainstream news media typically depicts the police and the actual lived experiences of black, brown and poor Americans.

Walter Lippmann is famous for his observation made in 1922 about “the pictures inside of people’s heads” and the power of “stereotypes.” Because life perspectives are relatively limited, individuals rely on the news media (and the mass media more broadly) to create a cognitive map they use to make sense of the world around them. In a society such as the United States, one which is highly race and class stratified, this means that entire groups of people often experience very different social realities.

This dynamic is revealed in stark relief by how White America and Black America possess radically different perspectives on the police and the United States’ criminal justice system.

As reported by public opinion polls, 52 percent of white Americans say that police in their community are equally fair to blacks and whites. Most whites also agreed with the decisions by juries to not charge Darren Wilson in Ferguson, Missouri or the police who choked to death Eric Garner in New York.

By comparison, only 12 percent of African-Americans report that the police in their community treat blacks and white equally.

This is part of a broader pattern where white people are by very large margins much more likely to have faith, trust in, and believe that America’s police (and broader criminal justice system) treat blacks and whites fairly, as well as force in an appropriate way.

Collectively, these results are not merely a function of superficial differences in opinion. For white Americans, by significant margins, to actually believe that the American criminal justice is fair to blacks is delusional given both the readily available and comprehensive empirical data, as well as videos and other anecdotal evidence, that demonstrates how the exact opposite is true.

One of the greatest privileges of Whiteness is the ability to ignore the realities of racism and white supremacy in the United States and the West. White attitudes about crime are a powerful example of that phenomenon in practice.

The delusions held by substantial portions of the white American public about the fairness of the police (and broader criminal justice system) towards black Americans and other people of color are also enabled by broader myths. These include such fictions as “police have one of the most dangerous jobs in the country” (in reality, police work is not even in the top ten most dangerous professions) and that police thuggery and abuse is just a case of a “few bad apples” (police who cover-up for their corrupt and abusive peers are just as accountable as they enable illegal behavior). The sum effect of such distortions is that police violence, abuse, murder, and thuggery against black and brown people is usually excused. It is also rarely prosecuted. Moreover, the myth of “officer friendly”-- an integral part of the “cult of the first responder”--camouflages and distracts from a racist, militarized, violent, and authoritarian police culture that is a national problem.

The dominant narrative generated by the corporate news media is designed to support and nurture the “pictures insides the heads” of White America. Here, the dominant narrative does the work of normalizing white privilege and class inequality. Those who fight for social justice and equal human rights for non-whites (as well as other marginalized communities) are providing an essential counter-narrative and act of truth-telling that reinforces the full human worth and dignity of all people.

Crisis and human tragedy are not exempt from calculations of political benefit.

The winners in the San Bernardino mass shooting are the merchants of fear and death. These are the proto-fascist demagogue Donald Trump, his fellow racist xenophobes in the Republican Party, the N.R.A., the gun manufacturers, and a corporate news media where if “it bleeds it leads” is standing order number one.

The losers here are those Americans who want to stop police thuggery and violence, know that a surrender to fear and anxiety is a threat to freedom and democracy, and understand that stereotyping all Muslims as though they are an interconnected hive mind of evil, each one a potential bomb or killer in our midst, will actually help ISIS instead of undermining it.

The fourth estate is supposed to educate citizens so that they can make informed political decisions and also hold their elected officials and other elites accountable. Unfortunately, the corporate news media--more often than not—helps to create a confused public that is less able to responsibly (and substantively) participate in American political life.

In many ways, the spectacular and ridiculous coverage of the San Bernardino mass shooting-terror attack embodies almost everything wrong with today’s corporate news media.