Between "Star Wars," "Mad Max" and "Jessica Jones," this was the year women in genre shows came into their own 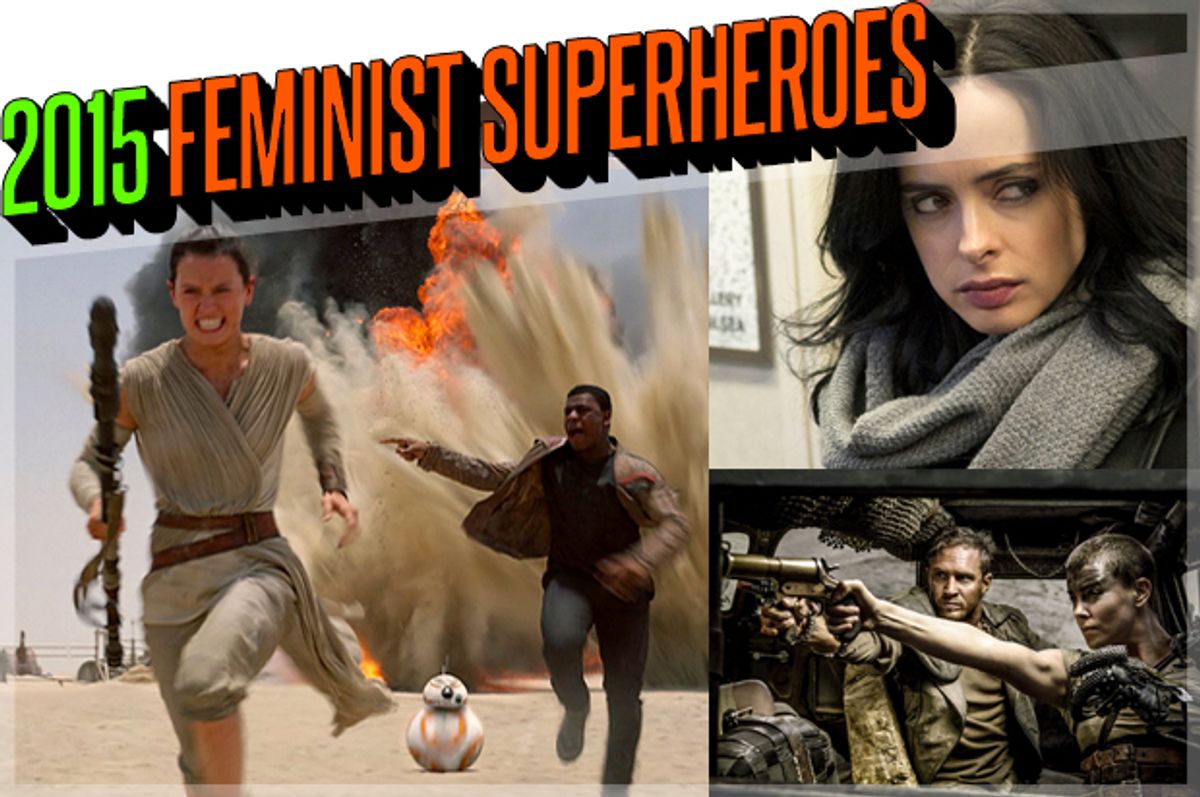 Women have been slowly gaining ground in the world of "geek culture" — an amalgamation of comics, video games, sci-fi and fantasy — but 2015 will likely go down as a breakthrough year all the same. That's because this is the year that a huge number of existing franchises finally started experimenting with giving women lead roles. The result was that a lot of franchises that were feeling a little long in the tooth felt reinvigorated and fresh, reminding people of the magic that made them fans in the first place.

By far, this was most evident in the big event movie of the winter, the year and quite arguably the century, "Star Wars: The Force Awakens." The original franchise, despite the presence of Princess Leia, was still male-dominated, with almost no important female characters of note except Leia. But "The Force Awakens" not only added more women to the mix, but took it a step further: The Luke Skywalker-style character, the young hero who is unaware of latent Jedi powers who will clearly develop into a prophetic-style savior character, is a woman.

This choice, to make Rey female instead of the male character that she would have surely been at any point prior to about 2012, proved to be the smartest decision that screenwriters J.J. Abrams and Lawrence Kasdan could have made, and not just because it let them cast Daisy Ridley, who turns in a winning performance.

By making the young Jedi-to-be female, Abrams and Kasdan added a layer of subtext to a story that otherwise would have felt like a direct rehash of the original "Star Wars," or at least, more than it already does. Adam Driver plays Rey's enemy (and possibly brother or cousin?), Kylo Ren, as an insecure young man who is incredibly talented, but drawn to evil because he hopes it will ameliorate his self-doubt. And then comes along a young woman who is confident, intelligent and a real natural at the very thing--using the Force--that he had to work for years at to learn. He is obsessed with her and wants to dominate her, either by recruiting her to be his minion or by killing her.

For anyone who has come in contact with Gamergate — a movement of young male video game enthusiasts who harass and terrorize any woman who dares to criticize video games — the dynamic is quite familiar. Gamergaters don't want to rid gaming of women. They just want those who come in to accept a subservient, silent role. But if you refuse to do that, they want you out. The Rey/Kylo Ren fight tapped into this fascinating dynamic, elevating the story beyond just a child's story of good and evil and into something that felt a lot more contemporary and meaningful.

By making the movie about Imperator Furiousa, played by Charlize Theron, George Miller is able to spin out a riveting feminist fairy tale in the post-apocalyptic wasteland where people seem to express themselves solely by grunts and high-speed car chases. It wasn't a subtle movie and didn't want to be. But it still felt fresh, in no small part because audiences are so used to seeing violence against women, especially in sci-fi and fantasy movies, used only as window dressing or to motivate a male character to heroism. But in "Mad Max," the women who are subjugated are saving themselves and, in the process, this low-dialogue, high-action movie ended up having more to say about patriarchy and the women — and men — who resist it than far more high-minded bedroom dramas can usually convey.

The Marvel movies continue to fall behind when it comes to making women the stars, and unsurprisingly the two big movies of the year, "Avengers: Age of Ultron" and "Ant-Man," ended up being less than memorable. Not so with the Marvel TV shows, however. The year kicked off with a winning TV show with a woman at the center, "Agent Carter," who is known as the founder of S.H.I.E.L.D in the Marvel universe.

But even better was a late in the year arrival, "Jessica Jones."  This show, which had the marvelous Krysten Ritter in the lead role, managed to win over even the most superhero-hostile of critics with its story of a super-strong woman who is trying to escape the clutches of a stalker who has  mind-control powers. The show, which had a female showrunner as well as star, was widely praised for its eerily accurate take on what life is like for women who have escaped abusive relationships or survived rape. Jessica isn't the simpering, angelic victim that we usually expect. Her strength is real, but so is her trauma.

But it wasn't just one of the best representations of surviving gendered violence ever to grace a TV set. "Jessica Jones" also reinvigorated the superhero genre, reminding audiences that it can be about a lot more than cool action sequences and special effects, but also about telling human stories where superpowers function as metaphors for the way we actually live.

"Supergirl," CBS's new addition to the DC universe, doesn't aim for the depths reached by "Jessica Jones," instead being satisfied being a shoot-'em-up action show about Superman's younger cousin making her way in the big city. But while it started slow — with far too many eye-rolling moments where they made an "it's a girl!" fuss that felt like it belonged more to a '70s show than one in 2015 — the show quickly found its footing and became one of the more surprising adventure shows on TV.

In fact, this first season of "Supergirl" is now more entertaining than "Arrow" or "The Flash," companion DC shows on the CW that were also started by showrunner Greg Berlanti. Part of the reason is gender. When the heroes of "Arrow" or "The Flash" try to show hidden depths, it comes across as clichéd explorations of male angst, the same story we've heard a billion times before.

But Kara of "Supergirl" is struggling to keep a bright, sunny exterior plastered over her inner boiling rage. The angst story now has a feminist angle. The angst caused by being a male superhero who feels burdened by saving the world is hard to relate to, but a woman who struggles to keep up a sunny, pleasing appearance while she's secretly burning with rage inside? That's the story of every woman's life, at some point.

Of course, the danger in all this is that women's stories will get relegated to novelty status, an occasional trick writers use to liven up a fading franchise before going right back to telling nearly all their stories about men. But the real lesson here is that when you tell women's stories on equal footing with men, that gives you twice as many wrinkles and possibilities as you have focusing like a laser only on one side of the gender aisle. Let's hope this new trend of putting ladies in the driver's seat--literally, in the case of "Mad Max"—stops being a trend and becomes the new normal.