Best TV of 2015: The best pop-music cues, from "Where Is My Mind" to Fleetwood Mac

The 2015 TV soundtracks that made us stop in our tracks 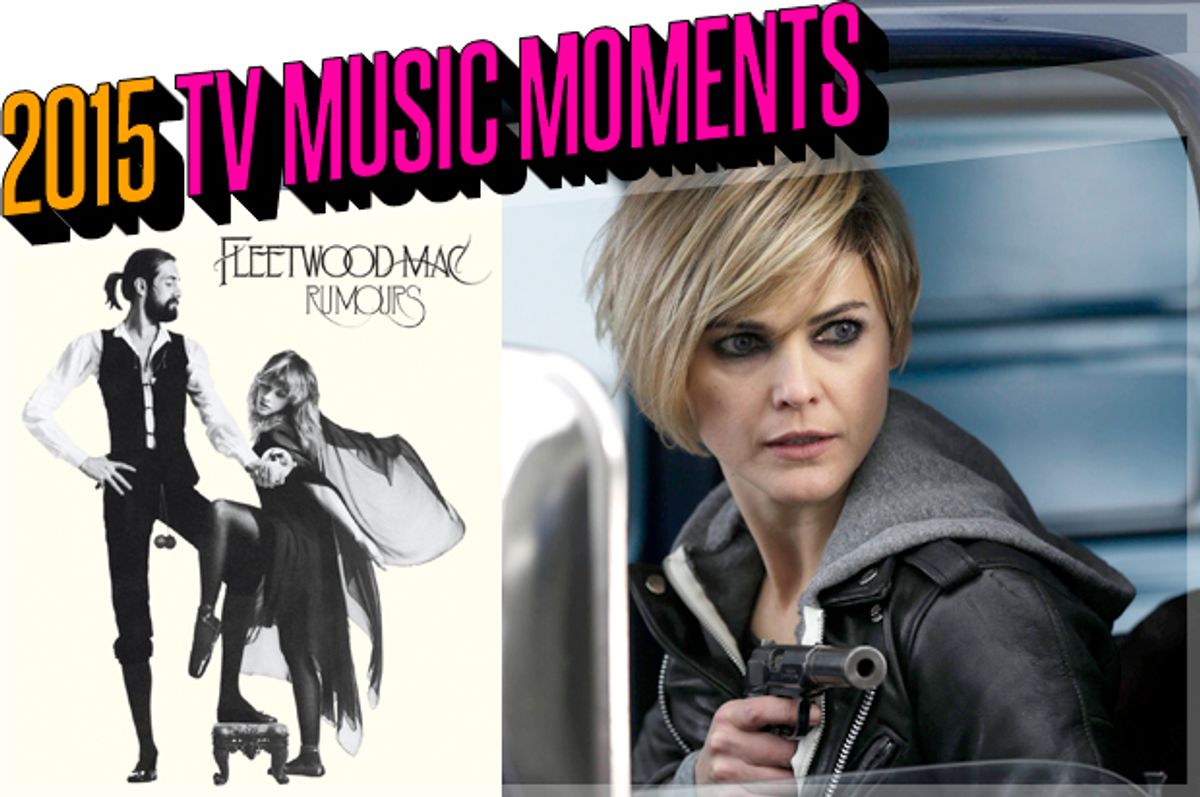 1. Maxence Cyrin’s piano cover of the Pixies’ “Where Is My Mind,” at various points in “The Leftovers” and in “Mr. Robot” episode “eps1.8_m1rr0r1ng.qt”

If there is a song of the year, this is it. “Where Is My Mind”—in haunting piano melody—seemed to be the undercurrent of a lot of television, softly tinkling behind Kevin Garvey’s existential crisis in “The Leftovers” and scoring Elliot’s plans to send the world into the post-apocalypse. The iconic film “Fight Club” ended with the Pixies’ original electric guitars scoring the collapse of Wilmington, Delaware’s skyscrapers. Both “The Leftovers” and “Mr. Robot” opted for the far less triumphant piano version—more explicitly emo, but perhaps even more lost, too. It should be said that both shows did extraordinary work with their music direction—drawing from classical music, indie rock, and their own instrumental scores when necessary—but still, for both, this version of “Where Is My Mind” is the standout.

One of the most chilling slow builds this year, as the first nuclear explosion on the planet occurs during a period of incredible personal anxiety for the scientists and civilians in the middle of the New Mexican desert. “Manhattan” is about the people who are, by accident or design, teetering at the precipice of the next great accomplishment in human history, but “Skeletons” cracks open just how much fear and pain there is on the eve of the world’s deadliest weapon finally approaching fruition.

3. James Blake’s “Wilhelm Scream” in “Not So Together,” the season finale of “Togetherness”

As I wrote extensively at the time, there is hardly a better choice of song for “Togetherness,” and the final moments elevate the entire season into something sublime. It helps that the creators, Mark and Jay Duplass, unleash all of their considerable directorial skill on the closing montage, which is chilling from the framing of a car on the freeway to the slow buildup to a kiss in a Sacramento hotel room.

4. Fleetwood Mac’s “The Chain,” in “The Americans” episode “Walter Taffet”

There isn’t a more perfect song for this show, which is entirely about the endless, meaningless loops that loyalty, family, and violence create for its characters. “The Chain” plays during a desperate, wild scene where Elizabeth and Philip launch an assassination operation, while a spy-in-training watches from the curb.

The real brilliance in using this song is in showrunner Jill Soloway’s decision to use it twice, to score what is the beginning and end of what is in actuality a circular arc. The reprise it occurs during a scene of awful grief and violence, but as “Transparent” so often does, it finds a way to make the moment of tragedy a moment of beauty and love, if not of joy, exactly. “Waiting” does a lot in terms of setting the scene, which is to say, a lot in terms of making me cry.