Best TV of 2015: The relationships, big and little, that made TV worth watching

It’s not always just a character that gets you hooked—it’s the dynamic between two. Here are 10 that moved us 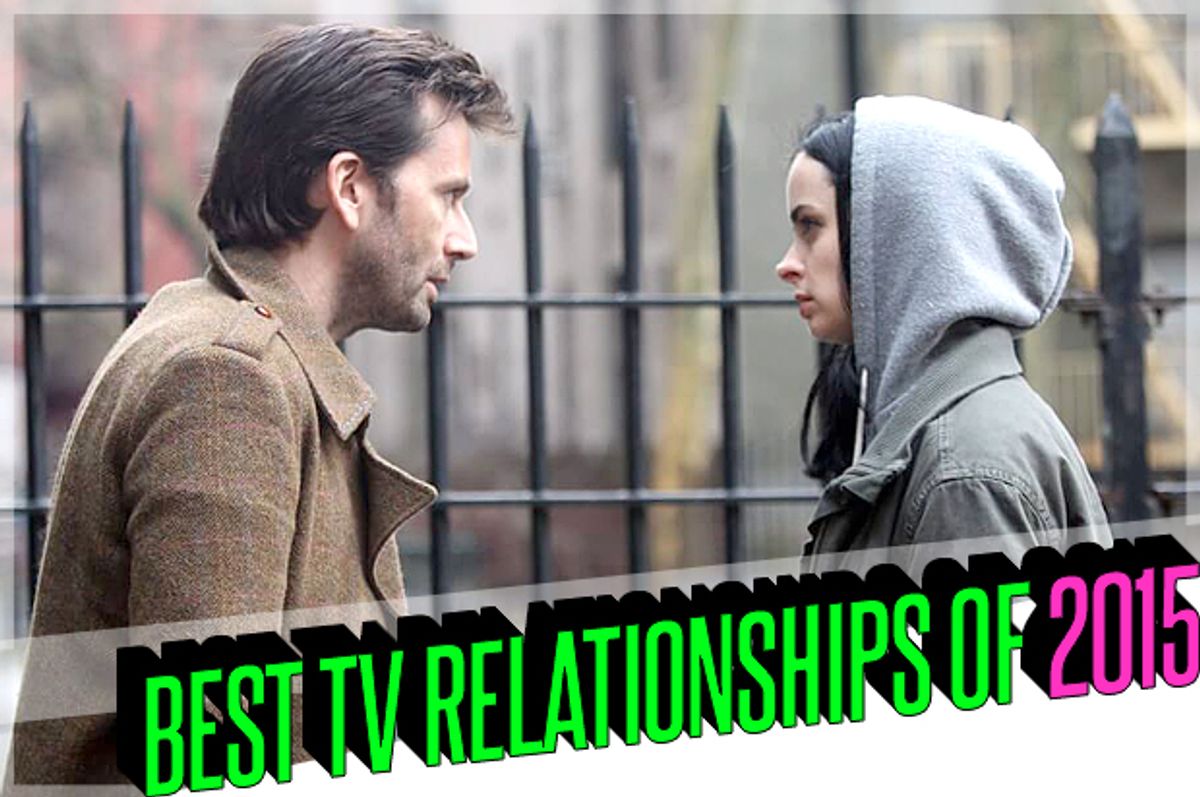 Jessica’s mission to vanquish the man who took over her life and brainwashed her is the story of the entire first season of “Jessica Jones,” and it is the unstable core of the show’s appeal. It’s abusive, manipulative, and horrible, but arresting, too—both for its familiarity and for the enormous energy both actors bring to their performances.

Speaking of mutually manipulative relationships, Rachel and Quinn are an employee and her boss who have found away to curl their talons into each other. Both are brilliant, and both are apt to run away with their brilliance in the name of ratings, leaving emotional and occasionally actual wreckage in their wake. They’re both made so cynical by their job—manufacturing romance for a reality show—that the only romance they’re capable of is a platonic, murderous kind with each other. At the end, they’re all the other has left; Quinn has scuttled Rachel’s shot at love, and Rachel has saved Quinn’s show, so she can continue to poison herself slowly to death. Rachel says to Quinn: “I love you.” It is as much an admission of defeat as it is an expression of affection.

The second season of this show radically rearranged who were the main characters and who were supporting cast—and found its sweet spot with Cameron and Donna’s gaming startup with a related online community. Friends, coworkers, co-entrepreneurs, and fellow programmers, Cameron and Donna’s relationship to each other became so much more fruitful and intimate than their romantic interests. The show was much, much better for it.

This British comedy, which came to the States via Amazon Prime, hinges on the hilarious, intimate relationship between one-night-standers Rob and Sharon who find themselves pregnant and starting a life together on rather short notice. It’s particularly moving because neither of them is ever totally doing the right thing, and yet their attempts to be good to each other are heartwarming (and usually quite funny).

This year, the relationship that has been teased and prodded for seasons finally took center stage on “Scandal,” as Fitz broke up with his wife in the public eye and had Olivia move into his residence, a little place called the White House. “Scandal” has had its problems, but Olivia and Fitz’s chemistry and unstable chemistry has never been one of them. The two were even more explosive this year than ever, as the stakes towered to unbelievable heights. And the half-season ended with the huge experiment ending in total devastation, as Fitz and Olivia have a scorched-earth, glass-throwing, vicious breakup. Bonus: Finally playing “Let’s Get It On” by Marvin Gaye during a lovemaking scene. All of our fantasies really did come true.

It’s true enough that Taraji P. Henson, on her own, carries “Empire.” But it’s also true that right from the pilot episode, the defining relationship of the show has been Cookie’s unquestioning acceptance of her gay son, Jamal, who is an explicit stand-in for the show’s creator Lee Daniels. And as the show has had its highs and lows, narratively, while rocketing to the position of most-watched TV show in America, a continual source of familial love has been Jamal and Cookie’s relationship, even when on opposite sides of a label rivalry. In what is otherwise a rather fractious Lyon clan, Cookie and Jamal have always been there for each other, and that keeps the show somewhat together.

Affectionate, inseparable, and doomed, Gittel and Rose are siblings torn apart by Nazi Germany. Rose grew up with a brother named Gershon who turned into a sister named Gittel, but that didn’t stop her affection, although neither sibling really knew how to describe what had happened to them. Rose has to travel the ocean and make a life for herself in California, but finds a reflection of her lost brother in her granddaughter Ali (Gaby Hoffman). Their love for each other is the basis for the Pfefferman family’s entire drama—and remains in the form of an artificial bauble that hasn’t been discarded yet, a ring with a big fake pearl. That ring’s life cycle is as enduring as the relationship between the two siblings.

In both subtle and unsubtle ways, this season of “The Leftovers” introduced John Murphy as Kevin’s doppelganger, and as the season went on, that tense opposition reared its head in surprising and at times even violent ways. Kevin in season one was barely keeping it together; John in season two is about in the same way. Both end up neighbors on the eve of a very strange series of events in a place called Miracle, and wreak different kinds of havoc on each other. But as the finale indicates—rather powerfully—on some level, the whole season was working up to Kevin and John being able to call each other friends. There are a lot of shows that depict male friendship, but not many that dig into its potential complications.

It’s not always easy to bridge the gap from the fireworks of unresolved sexual tension to the day-to-day of a committed relationship. “Brooklyn Nine-Nine” has managed it quite admirably with Jake and Amy—partly because Samberg and Fumero have insane chemistry, and partly because the show had already worked so hard to make each detective a fully realized character. They might be together, but Jake still has trouble with being a human adult, and Amy still has trouble cutting loose. Together they are sort of finding a way to make it work, and being incredibly cute in the meantime.

WGN's "Manhattan" is a far too underappreciated show, on nearly every level. In this season, Frank and Liza have been mostly estranged, but if anything, the partnership between the two has been more unsinkable than ever, as they both try to find a way to survive in Los Alamos, New Mexico, in the months leading up to the creation of the world's deadliest weapon, the atomic bomb. I think there is the full material of a novel in the way Frank looks at his wife, when she is leading a lab group or teaching a class; there might also be a full novel in the many ways Liza supports and validates Frank, even at his most self-destructive. In a media world full of kindling romances, Frank and Liza are a bedrock marital partnership that are a joy to get to know.