I never got a DUI, fell down drunk or even had a hangover. That doesn't mean I didn't have a drinking problem 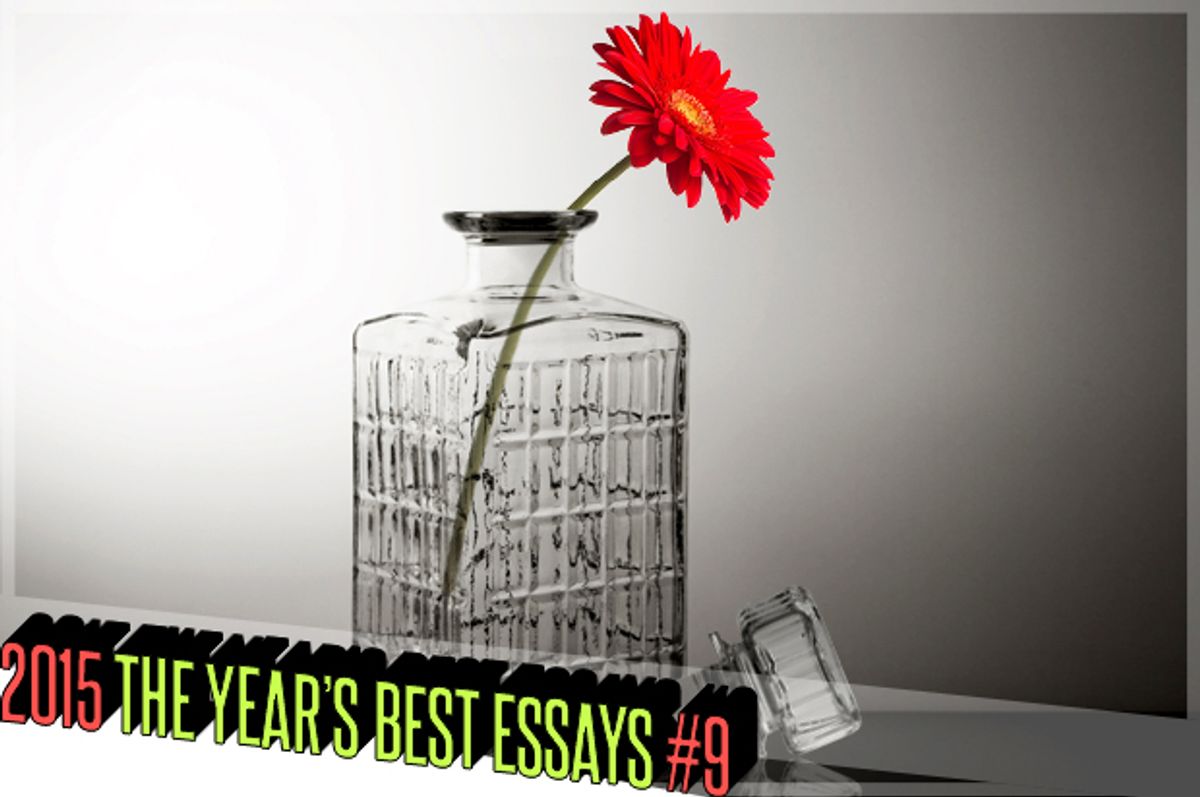 It started out as a night like many others. I was making dinner for Helena, the woman I’d been dating for a while. Candles flickered, curls of steam rose from prettily composed plates. It was my favorite moment of the day, neither too early nor too late to reasonably pour myself a drink.

“Can I make you a cocktail?” I asked Helena, knowing that she’d say no. I’d suspected from the start that she and I weren’t it, that click-into-place fit, and this was one of the reasons. She didn’t dance on tables or quit jobs impulsively and she didn’t drink. A shared split of good Champagne to celebrate a book deal or a sweet summer night, sure. A few sips of one of my signature cocktails at one of my signature drinking-and-dinner parties, maybe. But she didn’t get wild and rowdy, laugh so hard she spit gin through her nose, text me first thing in the morning to ask what kind of damage she’d done the night before. You know what I mean. She didn’t drink.

“I want to talk about your drinking,” Helena said. And right then and there, with our steaks au poivre cooling on our plates and a freshly shaken basil martini warming in my hand, I lost my amateur drinking status.

Before we continue, a few words about me. Child of the '60s, uncomfortably past midlife, overly therapized, perennial seeker of all kinds of truth. Denial, delusion? Not my brand. I’m a memoirist and a journalist; for Christ’s sake, I wrote a book about addiction. So I paid attention when my alcohol consumption started escalating a few years ago, along with my affection for — or was it dependence on — the warm, loose, truthy-blurty blur that followed a cocktail or three.

A series of recent losses (marriage, dear friend, beloved dad) had left me reeling, relocated and lonely in Los Angeles, where carbs are contraband, cocktails are compulsory, and everything stops for Happy Hour, every day of the week. Like a U-Haul lesbian couple, alcohol and I got serious fast. I cycled rapidly from wine with dinner to nightly complicatedly crafted cocktails, shaken and stirred by L.A.’s hippest mixologists, or homemade with ingredients I grew and brewed myself and consumed in my Silver Lake bungalow, with new friends or, more often, alone.

“Seeker of truth,” remember? It concerned me, how much I loved to drink. So I started administering this little self-exam. I’d compare myself to the alcoholics I knew, ticking off the differences between us. I’d never had a blackout, or an overdose, or even a hangover. My drinking had never caused me to say anything I wish I hadn’t, or fall down, or puke. Unlike an alcoholic, I’d never lost anything to my drinking — time, a job, a relationship, my car keys. I’d never gotten a DUI.

Most significantly — and this was my bright-line test, the notion to which I clung when I found myself counting down to happy hour at odd hours of the day  —no one had ever expressed concern about my drinking. How could I have a drinking problem, when my drinking had never bothered me or anyone else?

“You’re a different person when you drink,” Helena said.

Everything in me rose up in rebellion against the sickening realization that I’d just flunked my own sobriety test. My bright line had been irrevocably crossed. Only one thing could restore me and my martini to our comfort zone. Helena had to take it back.

“Of course I’m different when I drink,” I said. “That’s the whole point of drinking. Why would I consume all those liquid calories if I wanted to stay the same?”

“You’re distant when you drink,” she said. “Unreachable. It makes me feel alone.”

I extended my gently sweating martini glass, a three-olive branch. “Don’t feel alone,” I enticed her in my festive-sexy voice. “Drink with me.”

Helena shook her pretty head. “I don’t want to be around you when you’re drinking. I don’t care what you do when you’re alone or with your friends, but from now on you can either drink, or you can spend time with me.”

That’s what I get for dating a party-pooper, I thought — noting that I was taking full responsibility for my actions, something, I reminded myself, no addict would ever do.

Looking longingly at my untouched, beckoning cocktail, I made a snap decision, drew a new bright line. Unlike an alcoholic, I could control my drinking. I could choose a relationship over a drink. Secret bonus fact: like a Skid Row drunk, my “punishment” lacked teeth. Not drinking on the nights I saw Helena would surely help me shed my “gin belly.” Also, truth be told, I preferred drinking alone.

I agreed to Helena’s terms, and she didn’t question my compliance. She knew me to be a promise keeper, a maker of decisive moves. I stashed my martini in the fridge for later, when I was alone, and poured us each a tall, sparkly, boring-ass glass of Perrier.

A few nights later Helena and I were at a bar with friends, waiting for our dinner table. Catching Helena’s not-happy glance, I followed her eyes to the half-drunk martini in front of me. Two shocks hit me, hard. I’d broken a promise, the one thing I’d always promised myself I wouldn’t do. And I had, in fact, chosen a cocktail over a relationship — and over my own integrity.

This moment of truth happened in January. Four months later, Helena and I are friends, not lovers. And I haven’t had a drink since that night.

Here’s what I’ve learned since I haven’t been drinking. Please note that I don’t say, “Since I got sober,” or even “Since I stopped drinking.” I say, “I’m not drinking right now.” More on this in a minute.

As my abstinent months march on, I’m also noticing there’s usually a person or two or five in those living rooms who are abstaining from buzz beverages, too. Were the water drinkers there all along and I’m just noticing them now, the way you start seeing orange cars when you buy one? Have I simply shifted my attention away from the wild bunch and toward the “program people” in the room? Is sobriety a new L.A. fad — is sober the new drunk?

Despite my tiny tendency to be dramatic, I’ve restrained myself from announcing my temporarily sober status. No Facebook posts, no tweets. When people offer me drinks, I simply say, “I’m not drinking right now.” Surprisingly, nearly everyone responds the same way.

“What’s so great about it?” I ask, hoping to be convinced that my unpleasant experiment has some kind of unseen greatness to it.

“I wish I could stop drinking.”

Pensive face, resigned shrug, sip of Malbec. “It would be good for me.” “I’d lose weight.” “I’d stop driving drunk.”

Another surprise, less than delightful: Not drinking is making me gain weight. When I first stopped, my friends squealed, “You’re gonna get so skinny!” (Did I mention I live in a city whose initials stand for Lifetime Anorexia?) I might be happily making my friends’ worst fears come true, if only I hadn’t traded my old lovers (Helena, alcohol) for my new ones (Ben, Jerry).

Not my fault, the NIMH says. Deprived of alcohol’s feel-good dopamine surge, the body craves another source. “Sugar … releases opioids and dopamine and thus might be expected to have addictive potential.” Oh, joy: I’m not even an addict (more on this soon, as promised) but now I have to kick two drugs. My two favorite drugs. Just swell.

Why, then, you might ask, are you putting yourself through this? I ask that of myself multiple times each day.

I don’t know. No, really. I don’t. And I’m good with that. Maybe I’ve been in La-La too long, but I believe in not knowing. Some of the best things in my life have happened following oh-so-rare episodes of waiting-and-seeing, instead of my usual rushing-to-resolve-it-already.

I stopped, initially, to give Helena and me our best shot. I continue to test the notion that my life — that I — might be better off, today or forever, without alcohol. I can always have a drink. I can’t always not-have-had a drink.

Despite my resistance to sobriety as more than a brief experiment, I cannot deny the improvements as well as the discomforts not-drinking has brought me. I sleep better when I don’t attempt to douse my lifelong insomnia with a very tall nightcap. I’ve been more productive, since now I can work after dinner, so I’m making more money. I’m saving money, too: Even at five bucks a pint, Ben & Jerry’s is cheaper than Hendrick’s.

I’ve grown closer to some of the other non-drinkers in the room and in “the rooms.” Sober people, I’ve discovered, tend to make really, really good friends — whatever makes them sober also makes them honest, direct and self-aware. I’m a better friend to myself, now, too. I keep hold of the things I think and feel after cocktail hour, the ideas I have, instead of losing them in a haze of table-dancing. At my age, improved memory is a benefit beyond AARP’s wildest promises.

So, yes: It’s great, what I’m doing, even though I don’t know why I’m doing it, or for how long, or what, exactly, is so great about doing it. I do know this: I’m proud of myself. Waking up in the morning, knowing that I resisted Hendricks' siren call last night, is the opposite of how I feel, wincing at the empty Peanut Butter Core pint in last night’s trash.

So shoot me: I still don’t think I’m an alcoholic. The NIH might not agree. “The term 'addiction,'” it says, “implies psychological dependence and thus is a mental or cognitive problem, not just a physical ailment.”

Based on the fact that I stopped drinking and can’t, according to my own criteria, start again, I’ve diagnosed myself, instead, as what the CDC calls an “excessive” or “problem drinker” — now, a “problem not-drinker.”

That’s the CDC’s good news (for me). The bad news (for all of us): “Excessive alcohol consumption is responsible for 88,000 deaths annually.” I can vividly imagine those deaths. Because when I was drinking, even after the advent of Uber, I often drove buzzed — and by “often” I mean three or more nights a week. The fact that I never hurt myself or anyone else (to my impaired knowledge), or got stopped by the cops on one of the many occasions when my blood alcohol level would have sent me to jail, now seems nothing short of miraculous.

So. Huh. Whether or not I’m an alcoholic, what I take from the science is that if I can’t drink “moderately” (the word that would be voted “least likely to succeed as Meredith’s lifestyle” by my friends, sober and not), I’m a problem drinker. And if I’m a problem drinker, I shouldn’t drink at all.

That’s a problem for me. Because I still want to drink. I still plan to drink. Every day I think, “This is the day I get to have a martini.” Not just any martini, mind you, but a Hendrick’s martini, two ounces—no, four—shaken till nearly frozen, lovingly poured into an angular, tall-stemmed, arms-wide-open glass. I swoon, even now, at the thought of it.

And then I think, “Get real. You don’t want one martini. You want a date with the bottle.” And so I sigh and go about my business, hoping that tomorrow will be the day I get to have a martini without having a problem.