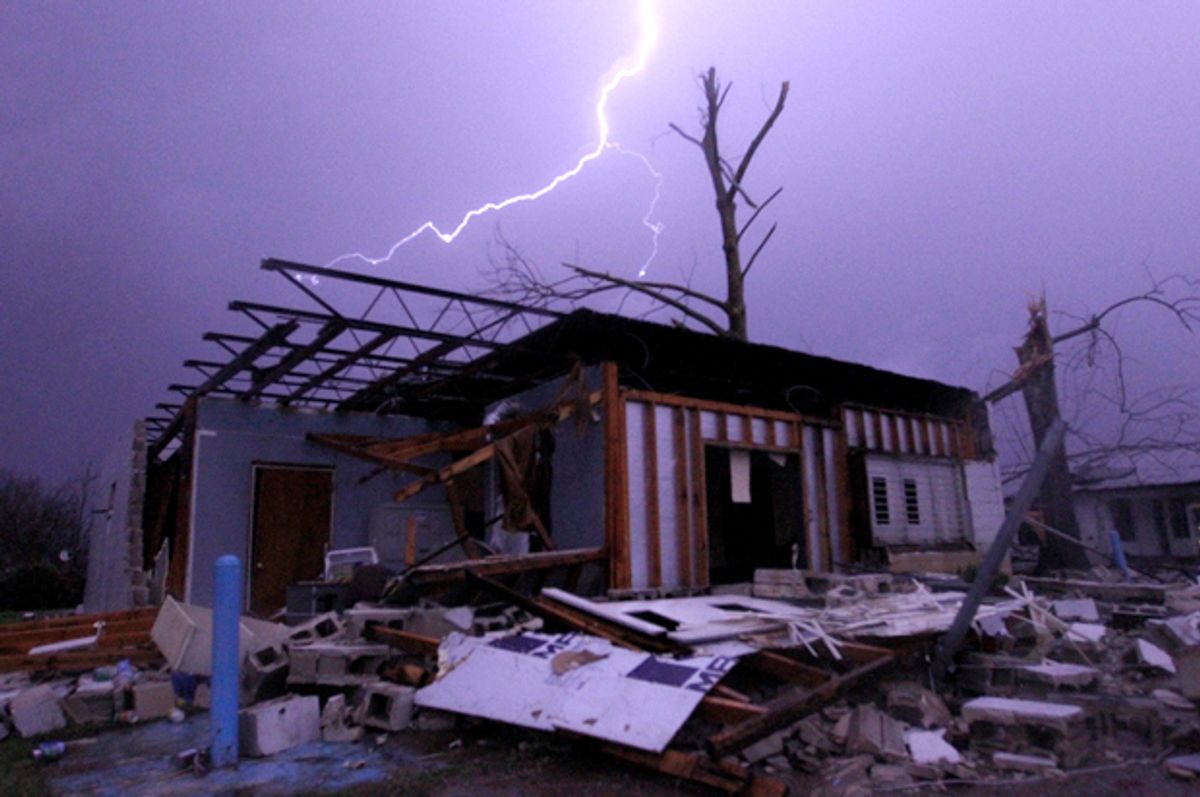 Lightning illuminates a house after a tornado touched down in Jefferson County, Ala., Friday, Dec. 25, 2015. (AP/Butch Dill)
--

When asked in the first Democratic presidential debate what he considers to be the greatest threat to national security, Sen. Bernie Sanders insisted it is climate change.

"The scientific community is telling us that if we do not address the global crisis of climate change, transform our energy system away from fossil fuel to sustainable energy, the planet that we're going to be leaving our kids and our grandchildren may well not be habitable," Sanders said in the October debate.

In the second debate, in November, Sanders stood by his statements. A month later, the dangers about which Sanders warned would come into fruition.

Over the Christmas holiday weekend, at least 43 Americans were killed in a series of extreme storms and floods.

More than 20 states from Texas to Maine had severe weather warnings. Tornadoes were spotted in 10 states. Michigan saw a tornado for the first time in the month of December.

Millions of people were stranded, on the busiest weekend of the year. Thousands of flights were canceled and delayed. Major highways were covered with floodwater and snow.

While this extreme weather was raging throughout the southern and midwestern U.S., states across the East Coast broke heat records. On Christmas Day, at the same moment that Texas, Oklahoma, and New Mexico were hit with blizzards, it was over 70 degrees in New York City.

The U.S. was not alone. As these storms were hitting the U.S., South America and the U.K. were seeing huge flooding. As many as 160,000 people were evacuated because of storms in Argentina, Brazil, Paraguay and Uruguay.

Overall, 2015 has been the hottest year ever on record. With extremely warm temperatures come extremely cold ones — and extreme weather.

The World Meteorological Organization (WMO) notes that the "years 2011-2015 have been the warmest five-year period on record, with many extreme weather events — especially heatwaves — influenced by climate change."

"The state of the global climate in 2015 will make history as for a number of reasons," WMO Secretary-General Michel Jarraud said in a November statement. "Levels of greenhouse gases in the atmosphere reached new highs... This is all bad news for the planet."

In other words, all the facts show that Sanders is correct: Climate change is, by far, the largest threat to Americans' security — and to the security of all other living things on this planet.

Sanders was pilloried by the American political and media establishments, nevertheless, for asserting that something seemingly abstract like climate change poses the greatest threat to the national security of not just the U.S., but also of the world as a whole.

Politicians and news outlets have constantly instead claimed that Islamic extremism poses the greatest threat to U.S. national security. Yet only a handful of Americans have been killed by self-proclaimed jihadists in the past 14 years, while climate change continues to get worse and worse.

To put things into perspective, more Americans were killed in the 2015 Christmas weekend storms than have been killed by Islamist extremists since 9/11.

Since the 9/11 attacks, 40 Americans have been killed by Islamist extremists. From 9/11 to mid-2015, just 26 Americans were killed by self-proclaimed jihadists. Fourteen more were killed in the San Bernardino massacre in December.

In the 2015 Christmas weekend storms, on the other hand, at least 43 Americans were killed.

If politicians and the media did their job — logically and sensibly governing and informing the public, not fear-mongering — this would not be a surprise. A comprehensive U.N. report released in November corroborated Sanders' warnings. The study found that 90 percent of major disasters in the last 20 years have been weather-related. It also found that the U.S. had been hit with more weather-related disasters than any other nation, including enormous countries like China and India.

In the past 20 years, according to the U.N. report, there were at least 6,457 recorded floods, storms, heatwaves, droughts, and other disasters. 606,000 people were killed in this extreme weather. 4.1 billion more people were injured, made homeless, or left in need of emergency assistance.

The U.N. report estimated that the costs of these thousands of weather-related disasters were between $5 trillion and $6 trillion — or between  $250 billion and $300 billion every single year.

"Weather and climate are major drivers of disaster risk and this report demonstrates that the world is paying a high price in lives lost," cautioned Margareta Wahlström, the U.N. official who oversaw the study.

The extreme weather that ravaged the U.S. over Christmas weekend is just one of these myriad disasters, yet many American politicians refuse to even acknowledge that it exists, or at least that it is caused by humans.

Nonetheless, as Sanders also stresses, this threat is not unavoidable; tangible actions can, and must, be taken here and now to mitigate it.

"Greenhouse gas emissions, which are causing climate change, can be controlled," stressed WMO Secretary-General Michel Jarraud in November. "We have the knowledge and the tools to act. We have a choice. Future generations will not."

Yet substantive action is being prevented by an obstinate reactionary political class and corporate media regime. As journalist Naomi Klein warns in her book and film "This Changes Everything: Capitalism vs. The Climate," the capitalist system, which puts profit over people, guarantees that large corporations like fossil fuel giants, not scientists, lobby for and even write environmental policies and laws based upon their bottom line, not based on what is good for the world as a whole, and for the people in it.

Much of the media fuels this problem, by giving a platform to climate science-deniers and treating people like Sanders as freakish pariahs when they point out that climate change is a much larger threat that Islamic extremism will ever be.

The U.S. political and media establishments are exponentially more interested in Islamic extremism than they are in anthropogenic climate change-induced extreme weather, but the facts indisputably show that climate change is exponentially more dangerous. Until they begin to treat it as such, there will be more and more tragedies like those millions of Americans endured over Christmas weekend.