Marco Rubio picked up the backing of Rep. Trey Gowdy who, by Rubio's standard, has weakened national security 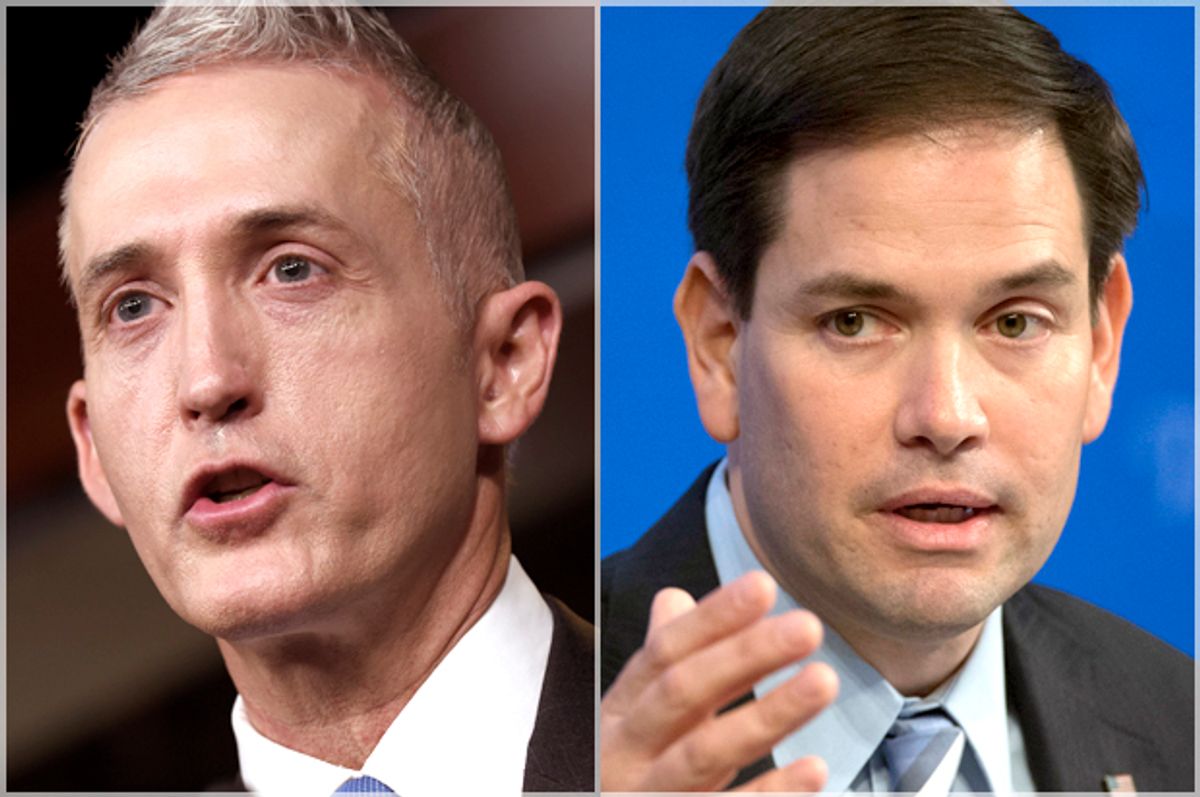 Marco Rubio’s rise to “2016 GOP Frontrunner Because It Just Sort Of Makes The Most Sense” got another jolt over the weekend with the announcement that South Carolina congressman Trey Gowdy is going to endorse Rubio and campaign with him in Iowa. Gowdy’s a Tea Party guy and his national profile was raised considerably when John Boehner tapped him to be the chair of the House Select Committee on Benghazi, so the general consensus is that his endorsement is a good thing for Rubio, particularly given that South Carolina is among the early-voting primary states.

But, of course, nothing is ever that simple, and a Gowdy-Rubio campaign tag team is actually kind of awkward for Rubio, given the extent to which their records clash and the high-profile failings of Gowdy’s Benghazi inquiry.

Let’s start with the Benghazi stuff, since that was what Donald Trump zeroed in on when attacking Gowdy for endorsing one of his primary rivals for the Republican presidential nomination. Trump was on Fox News over the weekend and tore into Gowdy for the Benghazi Committee’s interrogation of Hillary Clinton this past October, calling it, in that distinctly Trump-ish variant of near-English, “a total not-good for Republicans and for the country.” That’s an accurate, if grammatically exotic, assessment of the excruciating 11-hour faceplant Gowdy and the Republican members of the committee threw themselves into when taking on Clinton over Benghazi. And as Paul Waldman notes at the Washington Post, that hearing was “just one more iteration of the pattern that has Republican voters so disgusted with their Washington leadership: touted as the vehicle to bring down Hillary Clinton, it ended up backfiring and doing nothing but make Republicans look foolish.”

Since the circus of the Clinton hearing, Gowdy and the committee have tried to maintain a low profile. But their efforts have been stymied by a former staffer who filed a lawsuit claiming that the committee had discriminated against him for his military service before he was wrongfully terminated. The same staffer is also suing Gowdy for defamation. The whole operation has become a scandalized mess as what little credibility it enjoyed has crumbled in recent months, and Rubio just picked up the endorsement of the guy responsible for all this dysfunction.

Outside the Benghazi shambles, there’s another portion of Gowdy’s record that might cause some headaches for Rubio. As you’re probably aware, there’s a bit of a collision happening right now between Rubio and fellow 2016 candidate Ted Cruz as the two have risen in national and state polling. Cruz has been whacking Rubio for his support for comprehensive immigration reform, and Rubio has hit back by arguing that Cruz had “weakened” national security by voting for the USA Freedom Act, which reformed intelligence gathering procedures and ended the government’s bulk data collection of phone records. In Rubio’s estimation, the legislation jeopardizes the safety of the American people. “I know this, if God forbid there’s an attack tomorrow morning in another major U.S. city, the first question everyone is going to have is: Why didn’t we know about them, and how come we didn’t stop it?” he said on Fox News earlier this month. “And the answer better not be: Because a tool we once had that could have allowed us to identify them is no longer available to us.”

So there’s a bit of tension between the two, and it’s entirely Rubio’s fault, given that he’s adopted this foolish strategy of lashing out wildly at Cruz for supporting a piece of national security legislation that was backed by huge numbers of Republicans in Congress. If, as Rubio argues, Ted Cruz weakened national security by voting for the USA Freedom Act, then it’s tough to see how Gowdy isn’t just as guilty of that same transgression, given that the legislation actually has his name on it.