They're already trying to steal 2016: Inside the GOP voting-rights scheme intended to derail democracy 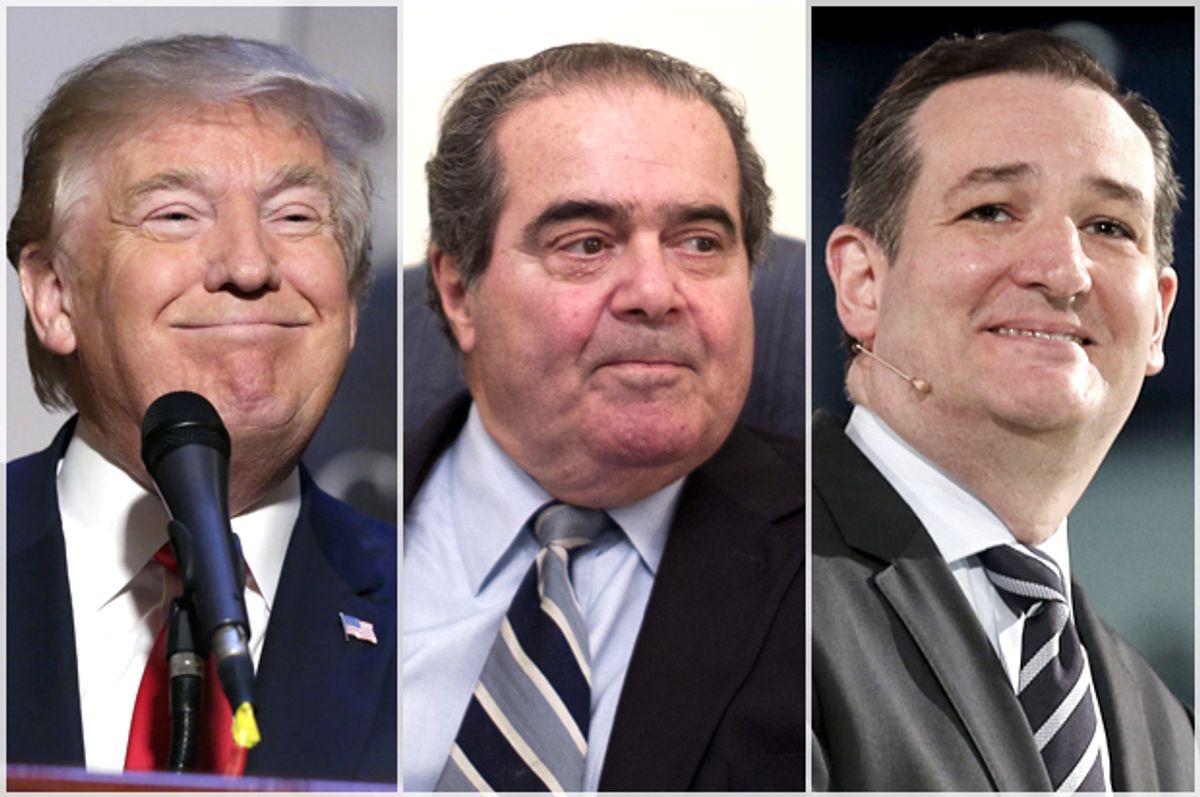 Ever since African-American men were granted the right to vote with the passage of the 15th Amendment in 1870, programs were enacted to make it impossible for them to exercise the franchise. And needless to say, the passage of the 19th Amendment 50 years later, which opened the franchise to women, only resulted in even more programs to deny African-Americans their ability to vote in many states. All of this was quite legal under the states' rights doctrine until the 1960s, when President Johnson and Congress finally passed the Voting Rights Act, which put the federal government in charge of monitoring the election processes of jurisdictions that were proven to have discriminated in the past. Trying to keep racial and ethnic minorities from voting is as American as apple pie.

Over the years, the right wing, which has always been hostile to the idea of "too much" democracy, worked to create an illusion that there was a great threat of "voter fraud" in America that needed to be dealt with by enacting extremely restrictive voter eligibility requirements. There is no evidence of systematic voter fraud anywhere in America, but that hasn't stopped the right from doing everything in its power to make it difficult for ordinary people to exercise the right to vote. (If only they were as vigilant about preventing the very real threat of gun violence.)

And they have been helped in this task, unbelievably, by Democrats who are so afraid of right-wing hysteria that they actually helped the Republicans destroy one of their voting rights institutions, ACORN, when a right-wing con artist produced a doctored video to tarnish its reputation. They didn't even wait for the facts; they immediately wrung their hands and joined the metaphorical lynching. It was a low point in recent civil rights history and it proved that voting rights activists cannot count on the political class to have their backs even when it means their own party will suffer.

Vote suppression was, of course, the way they kept African-Americans from voting during Jim Crow, so even as they destroyed ACORN, the usual suspects simultaneously worked to undermine the VRA and finally succeeded in having a right-wing Supreme Court majority overturn it. Now Republican state governments are much freer to restrict voting so that the undesirable minorities, whom they assume will vote for the Democratic Party (and rightly so since Republicans are openly hostile to them), will have a much more difficult time voting. They will naturally keep up their assault on the ability of urban black voters to participate by eliminating polling places and reducing early voting, which makes it difficult for hardworking people to participate. But the latest attacks are coming from a number of other directions, some of which are openly undemocratic, and are increasingly focused on Hispanics.

For instance, the argument in Evenwel v. Abbott, the latest voting case to come before the Supreme Court, is that only eligible voters are entitled to representation by the government. This means, essentially, that children, legal residents, former felons or the mentally ill have no representation. Obviously, it will mean that undocumented workers, many of whom are counted in the census, will not be represented. As a practical matter this will have the fortuitous result (for Republicans) of making voting districts more rural and more white. And that is the point.

Nobody knows how such a thing can be implemented because there is no count of "eligible voters" -- the census doesn't ask the question and there would be no way of determining its validity anyway. But the consensus among legal observers seems to be that the court will likely divide along the usual partisan lines and thus change the way representation is apportioned to favor white Republicans once again.

That's not the only thing they are doing. For obvious reasons, the biggest fear among Republicans these days is no longer the threat of black Americans voting. They will certainly continue to do everything in their power to make it hard for them to exercise their rights  -- they are the Democrats' most reliable constituency. But the major threat today comes from the fast-growing Latino population. Indeed, the campaign to deport immigrants and end birthright citizenship is hugely influenced by their fear that they will be demographically smothered in a few years by the American offspring of undocumented workers. The "path to citizenship" has them terrorized as they see it as an obvious electoral advantage for the Democratic Party.

There was a time when this prospect was actually considered an opportunity for Republicans who believed that they could appeal to this voting bloc through their shared belief in family values and small business entrepreneurship. One of George W. Bush's greatest assets was considered to be his ability to attract Hispanics and he managed to get almost 40 percent of the vote in 2000. Unfortunately for Republicans, their older white constituency wants nothing to do with this --- indeed, they are repelled by the idea of being in the same party as a group of immigrants who don't look and sound like them. George W. Bush was abandoned by his party not only because of his Iraq debacle, but because he was widely considered to be soft on immigration.

As you can see from the presidential campaign, notwithstanding the party leaders' understanding of their electoral challenge, this has hardened into a litmus test within the party. Republican voters want immigration stopped, they want a wall, they want deportation of undocumented immigrants and they want birthright citizenship to be repealed. (The last may require a constitutional amendment, although there are some cranks who insist it can be done legislatively. With this right-wing majority, they may even be able to get that endorsed by the Supreme Court.) GOP presidential candidates are required by the older white base to be openly hostile to Latinos, which ensures they will not get their votes. In that case, since the Latino population is growing very fast and is younger than the white population, the only option (aside from ethnic cleansing) is to try to prevent them from voting for Democrats by making it difficult at the voting booth and diluting their representation.

Jim Rutenberg is writing a series on this subject for the New York Times Magazine that exposes the depth and breadth of this program. It's being road-tested in Texas where there exists a serious possibility, if they are unable to succeed in turning back the tide, of a Democratic majority in a very few years due to the rapid growth in the Hispanic population. They are pulling out all the stops from local reapportionment of city council seats to the above-mentioned Supreme Court case attempting to deny representation to people who are ineligible to vote.

And unfortunately, the Republicans have one very big advantage: fear. They have managed to make the process so harrowing that many Latinos don't feel comfortable voting even though they have a perfect right to do so. And perhaps more relevantly, they are discouraged and depressed about participating in the system because of the invective and hostility coming from so many white Americans, particularly those in power. Getting them to turn out to vote is a huge challenge.

But then that's nothing new either. Historian Rick Perlstein quoted documentation on the subject back when he was researching his book "Before the Storm" about the 1964 Goldwater campaign and the right-wing takeover of the Republican Party. It's a memo written by a Johnson staffer outlining the GOP vote suppression scheme called "Operation Eagle Eye."

This quote from the memo says it all:

"Let's get this straight, the Democratic Party is just as much opposed to vote frauds as is the Republican party. We will settle for giving all legally registered voters an opportunity to make their choice on November 3rd. We have enough faith in our Party to be confident that the outcome will be a vote of confidence in President Johnson and a mandate for the President and his running mate, Hubert Humphrey, to continue the programs of the Johnson-Kennedy Administration.

But we have evidence that the Republican program is not really what it purports to be. It is an organized effort to prevent the foreign born, to prevent Negroes, to prevent members of ethnic minorities from casting their votes by frightening and intimidating them at the polling place."

Operation Eagle Eye was in every state in 1964, for all the good it did them. One Republican lawyer very assiduously worked in Arizona that year to keep Hispanic voters from the polls and was reputed to have been very effective at intimidation. His name was William Rehnquist. He went on to become chief justice of the Supreme Court. His successor, John Roberts, worked with the recount team during the infamous election theft of 2000, presided over the 2008 "voter fraud" case that allowed states to require ID, and wrote the opinion overturning the Voting Rights Act in 2014.

These people play a very long game. But it's unlikely they will be able to suppress the Latino vote forever. Their hostility may be intimidating to an older generation but the new generation is not going to accept this. And there are a whole lot of young Americans of Hispanic descent. If they vote, this right-wing program will finally fail and fail spectacularly. And it will likely take the whole Republican agenda down with it. These young Americans will never identify with such a party. These conservative bigots are sowing the seeds of their own demise.