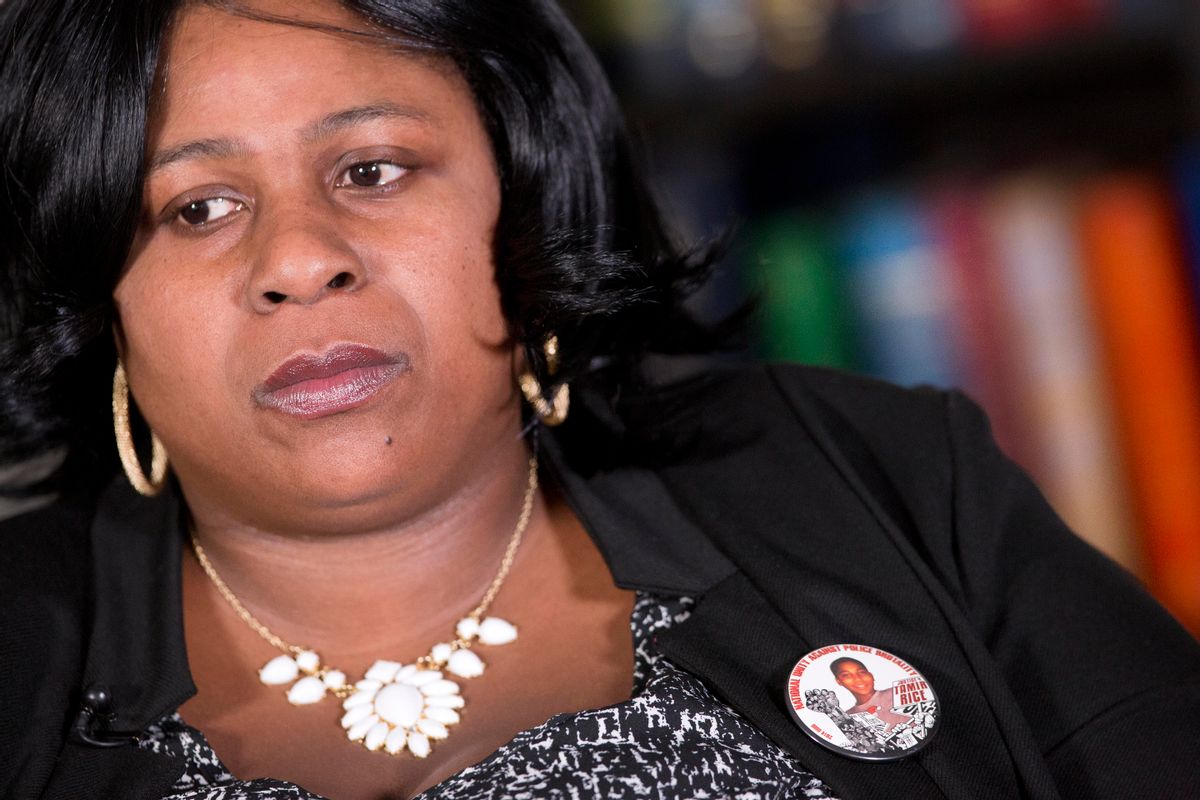 FILE - In this Dec. 15, 2014 file photo, Samaria Rice, of Cleveland, Ohio, wears a button with her son, Tamir Rice, photograph during an interview at The Associated Press, Monday, Dec. 15, 2014 in New York. Police say the investigation into the death of Rice, a 12-year-old boy fatally shot by a Cleveland policeman while he held a pellet gun has been turned over to county prosecutors. The Cuyahoga County sheriff's department said Wednesday, June 3, 2015, its investigation into the shooting of Tamir Rice is complete. The county prosecutor has said the case will be presented to a grand jury that will determine if criminal charges are filed. (AP Photo/Mark Lennihan) (AP)
--

The family of Tamir Rice is lashing out against the criminal justice system after a grand jury declined Monday to indict the police officer who shot the 12-year-old at a park in Cleveland in November 2014.

Rice's family has argued the non-indictment in the case, in which a black child was killed by a white police officer, is symptomatic of a biased and "corrupt" criminal justice system. The family's lawyers have also accused Prosecutor Timothy McGinty of "sabotaging" the case, and acting on behalf of the police.

"We wrote several letters to the prosecutor where we outlined the many ways in which the prosecutors were sabotaging the case," explained Earl Ward, an attorney for the Rice family, in a statement to Salon. The letters the lawyers wrote are publicly available, and were uploaded to their website, ecbalaw.com.

"Of significance was the presentation of use of force experts who were allowed to opine on the ultimate issue, whether the use of force was justified," Ward told Salon. "Moreover the experts chosen were clearly biased."

Ward also pointed out that Prosecutor McGinty "acknowledged that he didn't think criminal charges were warranted." "That view influenced the presentation to the grand jury," he said.

"Essentially what you had was a charade and a farce to provide the prosecutor with cover," Ward concluded.

McGinty claimed the police shooting should be blamed on a "perfect storm of human error." He insisted that "evidence did not indicate criminal conduct by police," and that Patrolman Timothy Loehmann's belief that Rice's toy gun was real was justified.

Rice's family lambasted the decisions of McGinty and the grand jury. In a statement they said they are "saddened and disappointed by this outcome — but not surprised." They maintained "it has been clear for months now that Cuyahoga County Prosecutor Timothy McGinty was abusing and manipulating the grand jury process to orchestrate a vote against indictment."

Law firm Emery Celli Brinckerhoff & Abady LLP, which is representing Rice's family, detailed the ways in which they say the prosecutor was biased in favor of the police.

Even though video shows the police shooting Tamir — whom they thought was holding a real gun rather than a toy gun — in less than two seconds, the law firm stated, "Prosecutor McGinty hired so-called expert witnesses to try to exonerate the officers and tell the grand jury their conduct was reasonable and justified."

"It is unheard of, and highly improper, for a prosecutor to hire 'experts' to try to exonerate the targets of a grand jury investigation," it added. "These are the sort of 'experts' we would expect the officer’s criminal defense attorney to hire — not the prosecutor."

"Then, Prosecutor McGinty allowed the police officers to take the oath and read prepared statements to the grand jury without answering any questions on cross-examination," the lawyers continued. "Even though it is black letter law that taking the stand waives the Fifth Amendment right to be silent, the prosecutor did not seek a court order compelling the officers to answer questions or holding the officers in contempt if they continued to refuse.  This special treatment would never be given to non-police suspects."

Rice's family says it is "in pain and devastated by the non-indictment of officers Timothy Loehmann and Frank Garmback for the murder of our beloved Tamir."

"After this investigation — which took over a year to unfold — and Prosecutor McGinty's mishandling of this case, we no longer trust the local criminal-justice system, which we view as corrupt," Rice's family stated.

"Prosecutor McGinty deliberately sabotaged the case, never advocating for my son, and acting instead like the police officers' defense attorney," they asserted in a statement.

"In a time in which a non-indictment for two police officers who have killed an unarmed black child is business as usual, we mourn for Tamir, and for all of the black people who have been killed by the police without justice," Rice's family added. "In our view, this process demonstrates that race is still an extremely troubling and serious problem in our country and the criminal-justice system."

"I don't want my child to have died for nothing and I refuse to let his legacy or his name be ignored," Rice's mother added. "We will continue to fight for justice for him, and for all families who must live with the pain that we live with."

"All I wanted was someone to be held accountable," she said. "This entire process was a charade."

The Rice family, which has filed a civil suit against Cleveland, says it wants the federal government to investigate the case.