Why Sarah Silverman is scary: It's the cultural power of celebrities that drives conservatives insane 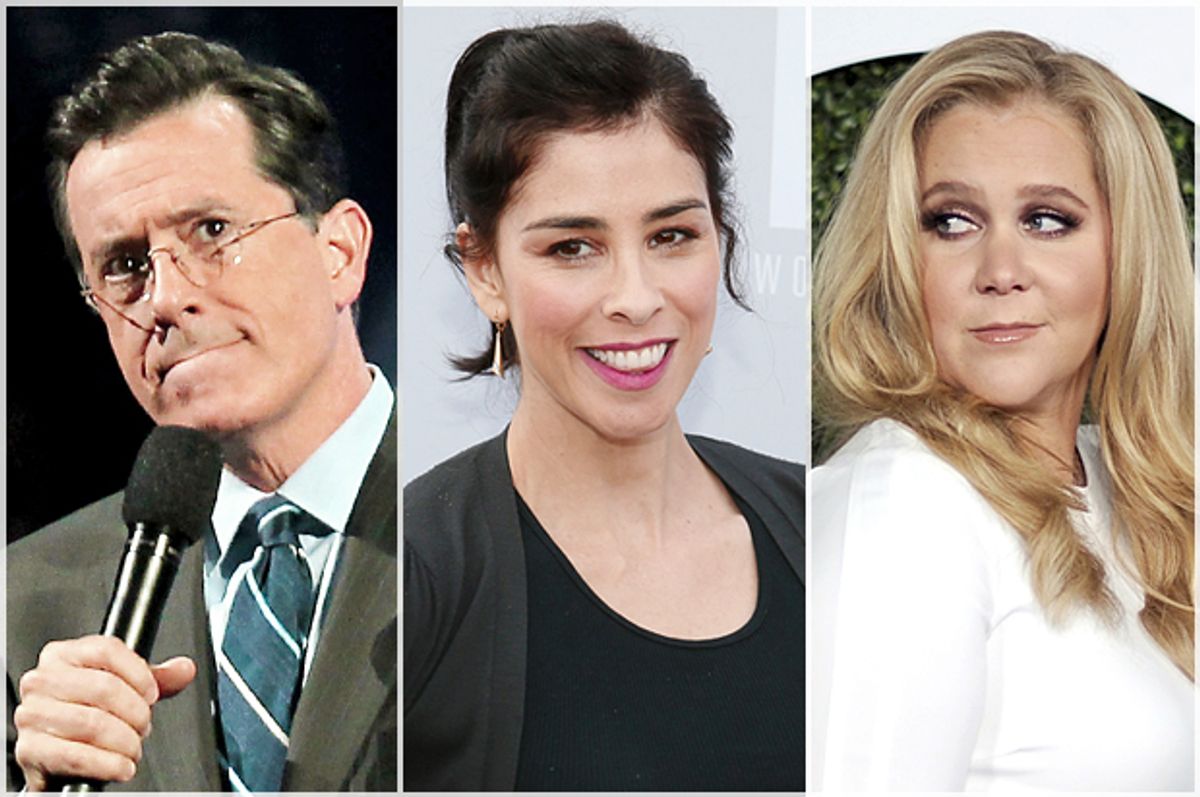 Conservatives love decrying liberals for "political correctness" and "oversensitivity," a particularly poignant form of hypocrisy since liberals could never reach the levels of whininess and hyper-sensitivity to perceived insults that the right wing coughs up daily. Doubly so when it comes to anything that a celebrity says.

Freaking out on celebrities allows conservatives to double down on their sense of victimhood — not only do they get to feign offense, they also get to wallow in how supposedly unfair it is that the giant liberal media conspiracy is oppressing them by allowing celebrities to say progressive things in public.

Or to make irreverent jokes, as evidenced by what happened with Sarah Silverman over the holiday weekend. Silverman made this joke on Twitter on Christmas:

What's immediately obvious is that the point of this joke is that it's right-wing outrage bait. Many trolls claim to just be doing it for the lulz, but it's clear that they are conveying an actual belief they hold when they tell women to make sandwiches or make racist jokes at people of color online.

But this joke doesn't hold such meaning to it. No one actually thinks that Silverman has some deeply held opinions about Jesus and gender. The whole point of this tweet is to put something conservatives like to act pious about — Jesus Christ — next to something that makes them uncomfortable — gender fluidity — and laugh at them while they overreact like a bunch of oversensitive babies. If conservatives don't like the joke, they could have deprived her of the punch line by refusing to react, but instead, they gave her ample amounts of material to laugh at.

Silverman's little experiment worked so well because it played not off ideas about religion and gender, but off understanding that the modern conservative movement is primarily, almost exclusively, about culture war. The narrative that undergirds and justifies the conservative movement is a belief that American culture used to be a wholesome one, a world where white Christian men were properly held in esteem above all others and people supposedly had good (read: conservative) values. And that now it's all under assault by multiculturalism, queer-positivity, feminism and sex positivity.

That's why the right has such a hang-up about celebrities. However wrong they may be on nearly everything else, conservatives are right to understand that celebrities and entertainment culture go a long way in defining what is mainstream American culture. Like it or not, but when celebrities say or do things in public, that signals to a lot of ordinary Americans that this behavior or belief is within the bounds of normalcy.

That's why conservative media puts even social justice media to shame when it comes to obsessively policing what celebrities do or say. As Media Matters chronicled on Monday, the list of celebrities that conservative media tried to punish for unacceptable displays of progressivism is dizzyingly long this year.

What is more interesting than the fact that they go after these celebrities, however, is the way conservatives try to discredit them. Whereas liberals will readily admit that conservatives who express reactionary ideas in public do, in fact, reflect what a huge number of Americans actually believe, conservative pundits try to paint progressive celebrities as effete and out of touch. They imply that progressive celebrities are being foisted on the country by a shadowy cabal of liberals that hold all the power despite supposedly being a tiny minority, and that it's all a feint to trick people into thinking that progressive views are more common than they are.

This notion that celebrities are not representative of "real" America — and may in fact be lying about their own actual beliefs — is the common theme in most of the attacks that Media Matters chronicled. Jennifer Lawrence's frustration with sexism isn't reflective of a widespread sentiment among women. Oh no, Lawrence is being controlled by this shadowy cabal and not "allowed to show the moral courage" to say that things were better for women back when they weren't allowed equal rights. Amy Schumer couldn't sincerely be opposed to easy access to guns in the wake of people getting killed during a mass shooting at a showing of her movie. Oh no, she's only pandering to "the collective, because again, the shadowy liberal cabal won't let you work unless you pretend to be on their side. Stephen Colbert couldn't possibly support the Black Lives Matter movement because he believes that black lives matter — oh no, it's just because he's indulging "a strain of self-righteousness," as if opposing senseless killing was the same thing as sitting in judgment of someone else's sex life.

It's the same theme, over and over again: No one actually believes this liberal claptrap, they argue. It's all just a great big conspiracy to destroy "real America" through celebrity culture.

This obsession with identity and who counts as a "real" American came through loud and clear in the right-wing responses to Silverman's obvious bait. What was immediately evident was that none of the people who claimed offense did so because they actually follow the teachings of Jesus Christ, a man who preached humility, generosity, gentleness and turning the other cheek. The levels of un-Christ-like vitriol indicated that this is because "Jesus" is just a symbol for the belief that white conservative Christians should be culturally dominant over everyone else.

In fact, a common reaction to her tweet was to focus on Silverman's Jewishness, particularly by making comments about Hitler and the Holocaust. Never mind that the man they are supposedly defending was Jewish himself. This isn't and never was about Jesus. The point of those "jokes" is clearly to put her in her place, to assert Christian dominance by making unfunny threats about what happens to Jews that get out of line. Something to keep in mind next time a conservative claims they are standing up for "Judeo-Christian" culture.

Or, in this case, when celebrities even just needle them a little. Silverman's joke may seem like a silly, tossed-off thing, but for a young person who grew up in a culture where you're literally brought up to believe lightning will strike you down if you dare question your family's religious teachings, a tweet like hers can be a revelation. She said this impious thing and not only did God not strike her down, but she's doing well by herself. That sort of thing can open the door to more questioning and thinking, and give them a path out of their repressive culture. And that's why so many conservatives are dog piling, trying to silence celebrities who do something like this.