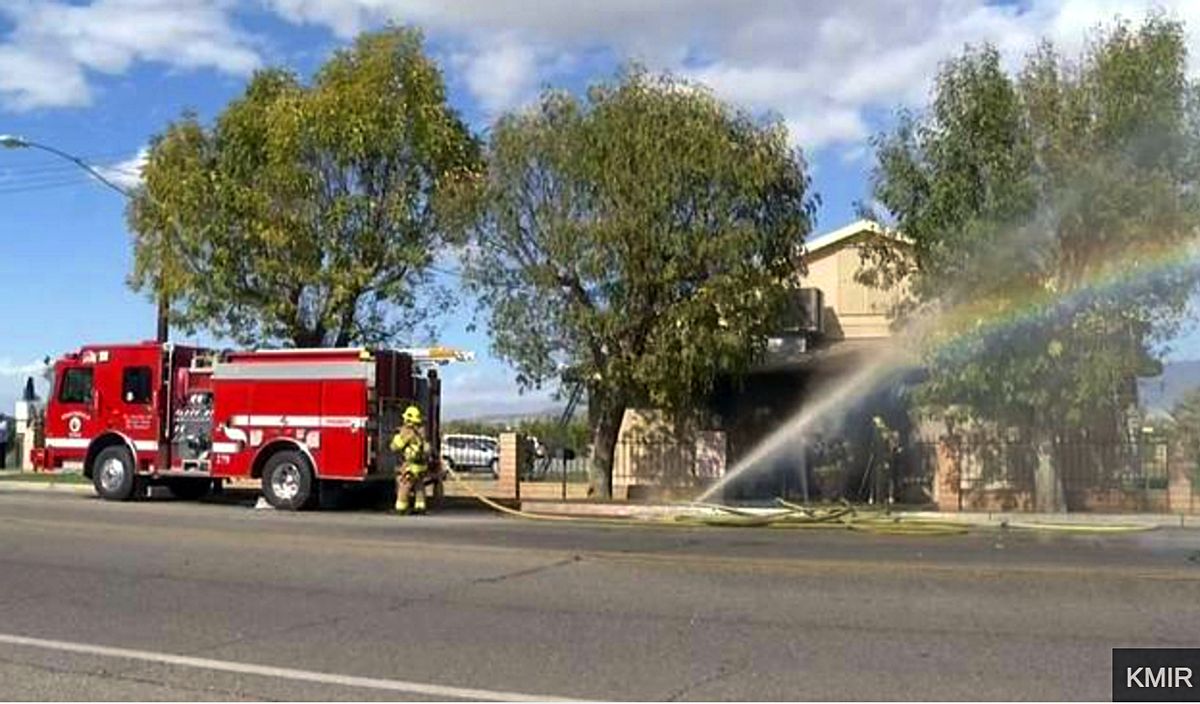 There was also an attack on a California mosque this month. The Islamic Center of Palm Springs, a mosque in Coachella, Calif., just east of Palm Springs, was set on fire Friday, Dec. 11. A suspect was arrested the next day. (AP) (AP)
--

(This article was updated with more information about the identity of the suspected arsonist, after it was released.)

While Christians around the U.S. were celebrating Christmas, Muslims in Texas were terrorized. After Friday prayers, the Islamic Center of Houston was set on fire in a suspected arson attack.

A man suspected of having set fire to the mosque on Christmas day was taken into custody and charged with arson on Wednesday, Reuters reported.

Gary Moore, 37, is being held in the Harris County Jail in Houston. In a twist, later reports revealed that Moore himself attended the mosque that he allegedly set on fire.

There were no injuries in the suspected arson, but it caused "significant" damage to the mosque, according to the Houston Fire Department, which declared that the fire was intentionally set.

Although the Houston mosque appears to have been set by a Muslim, other Texas mosques have previously been targeted by heavily armed anti-Muslim protesters. Many Texas Muslims have said they feel unsafe in the atmosphere of aggressive hate and bigotry.

In November, a right-wing extremist was imprisoned for, according to the FBI, making plans to shoot up American mosques with a machine gun during prayer time — hoping to kill not just the men, but also the women and children — before blowing up government buildings. Federal prosecutors recommended that the would-be terrorist get 20 years in prison, but he was sentenced to just seven.

CAIR condemned what it called the "light" sentence, saying, "It sends the message that the penalty will depend on who you target and who you are. In this case, Muslims were targeted and the perpetrator was not Muslim. If it would have been reversed, the outcome would have been much different."

Anti-Muslim bigotry is at a record high in the U.S., amid Islamophobic and anti-refugee policies and rhetoric from right-wing American politicians. In December, the number of anti-Muslim hate crimes tripled.

In recent weeks, there have often been several attacks on Muslim Americans per day. The Islamic Center of Houston was not the only Muslim property to be targeted. Earlier this month, an arsonist set fire to a California mosque. In North Dakota, a restaurant owned by Muslim Somali refugees was vandalized with Nazi graffiti and firebombed.

CAIR's Washington, D.C. office was evacuated by police in early December when the group received threatening hate mail that read "Die Muslims, die" and contained a substance first believed to be poisonous.

Americans have also been shot just for being suspected of being Muslim. On Thanksgiving, a taxi driver in Pittsburgh was shot in his own cab for being Muslim. In early December, a store clerk of Indian descent in Michigan, who may not actually be Muslim, was shot in the face by a robber who called him a "terrorist" and insisted he was a member of ISIS.