Best TV of 2015: A salute to the year's hardest-working faces we saw again and again

These are the performers who defined the year's best television, popping up in seemingly every show 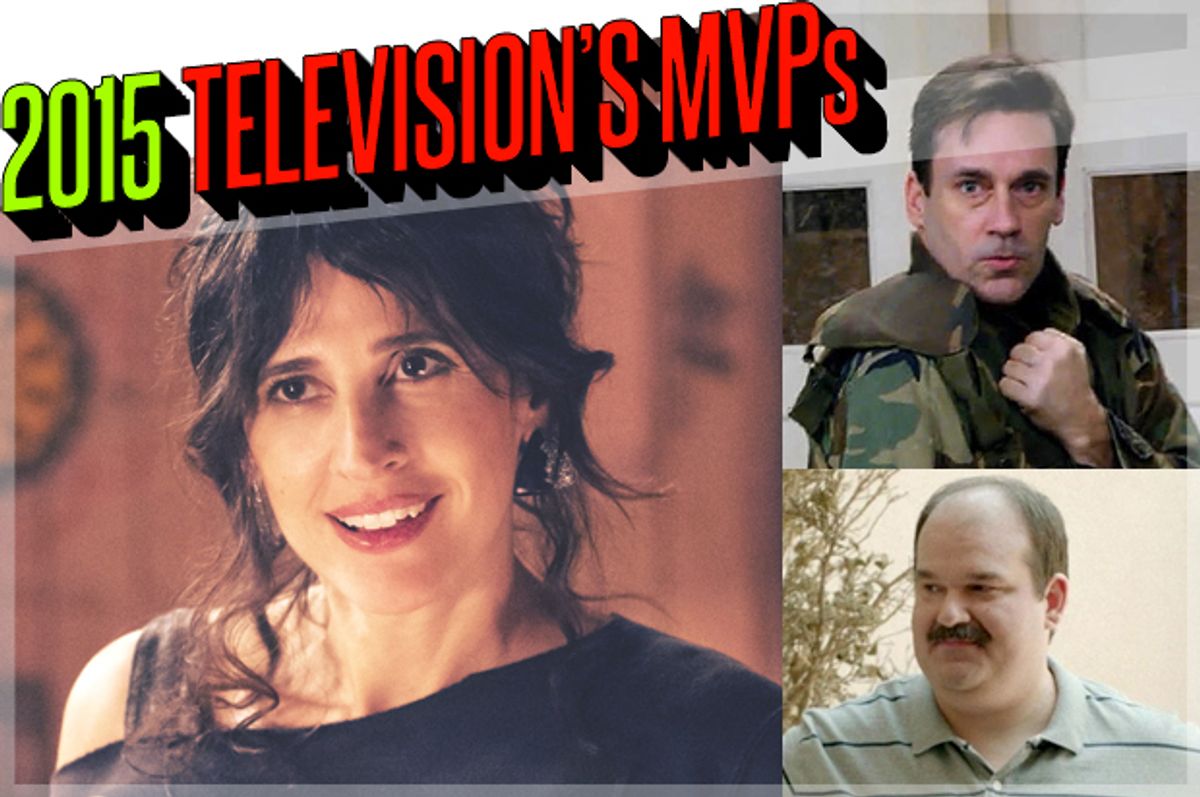 This has been Michaela Watkins’ long-overdue year. After introducing herself to many new fans with the short-lived ABC comedy “Trophy Wife,” Watkins found a place for herself in recurring roles on seemingly every hip comedy on television and then nailed two more dramatic performances, in Hulu’s “Casual” and Amazon Studios’ “Transparent.” Her turn on “Married” made for two of the best episodes of the little FX comedy; her performance on “Casual” saved that show from being a forgettable little sideshow; and her role in “Transparent” is one of the most painfully affecting, in what amounts to something like 10 minutes of screen time.

Jon Hamm finally won his Emmy this year, just in time for his Don Draper days to be put behind him forever, so that he could do guest turns on various comedies and the British show “Black Mirror,” which is finally airing its 2014 Christmas special stateside this month. His turn on “30 Rock” in 2009 was the first sign that Hamm could do comedy; this year, it’s been wonderful seeing Hamm take on roles so different from Draper—such as a psychotic assassin in “Wet Hot American Summer: First Day of Camp” or a put-upon, much maligned intern, in “Parks and Recreation.” But perhaps his most incredible role of all has been the selfish, charming false prophet in “Unbreakable Kimmy Schmidt”—a character whose smarm and toothy grin hides a destructive, sadistic personality. It was an astonishing marriage of the self-deprecating comedy he finds so easy to access and the antiheroism of Don Draper. In more ways than just the award, this was Hamm’s year.

3. Regina King: “American Crime,” “The Leftovers”
Another long-overdue winner at this year’s Emmys, Regina King has been a mainstay of good dramatic television for years. But this year she found not just one but two meaty roles—her Emmy-winning one on the criminal justice drama “American Crime,” and a regular role on the supernatural, despairing “The Leftovers,” which just concluded a brilliant season. King is rock-solid, as an actor, for being both intimately accessible and absolutely commanding when necessary. One of “The Leftovers’" finest moments is when she stares down—and metaphorically rips to shreds—her new neighbor Nora (Carrie Coon).

It’s been a few years since Rodriguez’s roles on “Community” and “George Lopez,” and the last sitcom he was a regular on, “Enlisted,” was canceled to much chagrin after one season. But this year Rodriguez found a place for himself on “The Last Man on Earth” as Todd, the second-to-last man on earth who begins a romance with January Jones’ character, Melissa. Phil Miller (Will Forte) tries to kill him at least once, but throughout, Todd maintains a sense of compassion; there’s a sense in which he is the actual hero of the first season of “Last Man on Earth,” while protagonist Phil is really the enemy. Rodriguez also did two episodes of “Better Call Saul”—two of the best episodes, in fact—as Jimmy’s old friend in Chicago, who has one of the more affecting on-screen deaths of the year soon after we meet him. And to add yet another dimension to his screen presence this year, this is his third season playing fractious supervising nurse Patsy de la Cerda.

Constance Zimmer has always been around, but often as a flat character. In “Entourage,” “The Newsroom” and “House of Cards,” she played hard-as-nails career women who cast aspersions, dirty looks and occasional insults at the main characters, who were usually either younger women or immature men. Perhaps she would have stayed in that marginal existence, if not for Marti Noxon and Sarah Gertrude Shapiro’s “UnREAL,” a Lifetime show about the seedy dark side of a reality dating show. Because the show is so acerbic and dark already, Zimmer’s playing a similar type as show-within-the-show’s head producer Quinn—but instead of being a sideshow, she’s one of the main attractions, as “UnREAL” zeroes in on what motivates this hard-bitten and manipulative woman. And that’s not all. In addition to reprising her role as Dana Gordon for the (atrocious) “Entourage” movie, Zimmer also joined “Marvel’s Agents Of S.H.I.E.L.D.” as a bona fide comic-book villain, albeit a largely bureaucratic one that ends up kind of a good guy who is romantically involved with the lead. Her character just got killed off, but it’s safe to say Zimmer’s leaving 2015 with a much bigger profile than when she started it.