Congress members get the kind of protection most of us only get at airports. Where's the gun control at my workplace

Doesn’t the rule preventing guns in the Capitol support the theory of gun control in its simplest form? 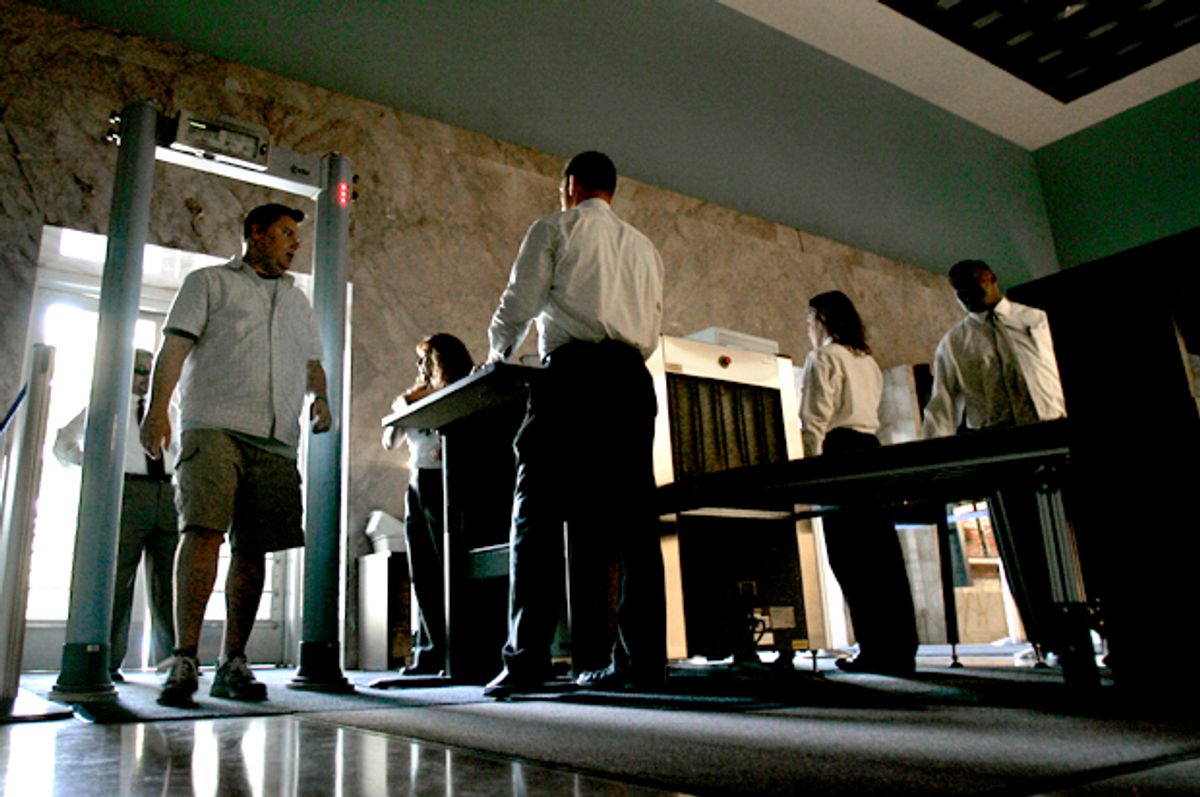 Most Republican members of the House and Senate claim not to believe in gun control. With straight and even passionate faces, they say reducing the influx and availability of firearms would do nothing to stem gun violence in their districts. But our tax dollars support plenty of gun control at their workplace. The U.S. Capitol Visitor website (visitthecapitol.gov) has a page devoted to items not allowed inside. Preceding the list is a paragraph that begins: “Before entering the Capitol Visitor Center, all visitors are screened by a magnetometer and all items that are permitted inside the building are screened by an X-ray device.” Prohibited items include liquid of any kind, aerosol spray cans, electric stun guns, and “guns, replica guns, ammunition, and fireworks.” It’s the kind of protection the general public is granted only when boarding an airplane.

At the state university where I teach in North Carolina, professors and students are considered less likely and presumably less valuable targets. My department’s building – renovated about a decade ago – has no magnetometer or X-ray device. There are deadbolt locks on classroom doors, but no interior knobs for them. If my classroom were unlocked when an active shooter entered the building I would have to open the door and insert my key from the outside in order to secure the room. When our department requested this be rectified, we were told the cost, and not the risk, was prohibitive. I now keep my classroom door locked at all times. Whenever a student arrives late, or returns after using the bathroom, we’re reminded of that looming specter, the possibility of becoming the daily mass shooting headline.

Luckily at present, firearms are prohibited on university campuses in North Carolina. We may not have security checkpoints to enforce this, but at least we have the rule. Any person carrying a firearm could be detained simply for having possession of it. This may not always be the case. The NRA – which has provided financial support to both the senator and congressman from my district – backs legislation that supports gun possession on campus. If this ever passes into law we won’t be alone. North Carolina’s open carry laws allow firearms in a vast range of workplaces, including many grocery stores.

Certain politicians may say that increasing arms, not restricting them, is the road to safety. But doesn’t the rule preventing guns in the Capitol (and in nearly every state Capitol) support the theory of gun control in its simplest form? If guns are not permitted in a specific area, gun violence will be prevented, or at the very least limited. In a country that this year has seen more mass shootings than it has days, the theory bears expansion outside the workplace of those who consider themselves its most important citizens. The Second Amendment is not so sacrosanct when it comes to their safety. And if it is – if the Congress and Senate truly reject the concept of gun control – then tax dollars should not be spent enforcing it for them. Lift the ban on guns in the U.S. and state Capitols and remove the screening processes that keep their employees safe.

Of course all reasonable congressmen and senators – regardless of party affiliation – would reject this idea. Wouldn’t it be crazy to spend their day in a building where any person with a mental illness or political agenda could march in at will and open fire with one of the many assault weapons legally and readily available in the United States?

That’s exactly how the rest of us feel.

Nina de Gramont is the author of eight books. Her most recent novel is "The Last September."