Teen magazines were the perfect fantasy for a lonely kid like me. But too much fantasy can take a toll 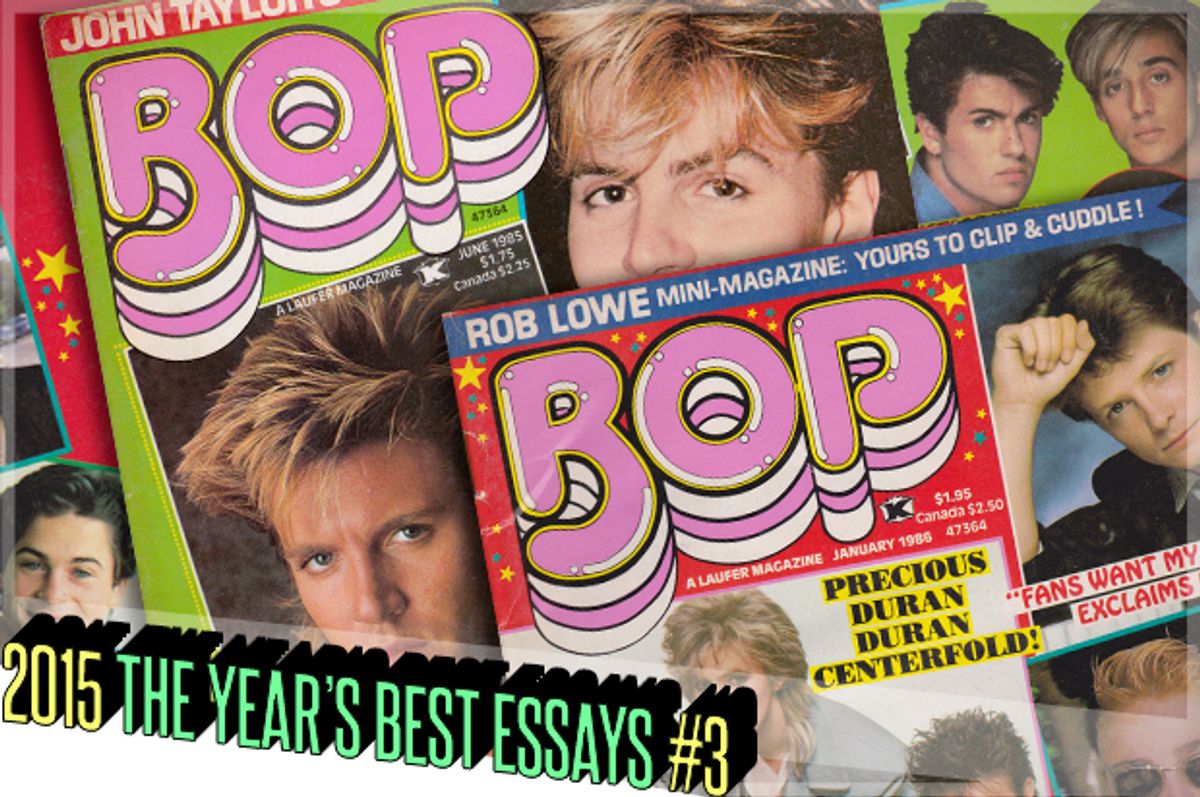 Recently, while wandering through a vintage store full of other people’s kitsch, I came across a batch of magazines that were more like a time machine.

I was a lonely kid, eager for childhood to end. If I couldn’t be an adult, I could at least act like one. I read thick paperbacks with adult themes. I snuck beer from my parents’ stash. I watched “Thirtysomething” at 10-something, and I loved it. But there was one category in which I remained very much a young girl. I read teen magazines. Not fashion magazines, in which pretty blondes in plaid skirts taught you how to crimp your hair. But celebrity pinup magazines. Teen Beat, Tiger Beat, 16, Bop. Every once in a while, a male friend will speak with aching wonder about the first time he saw a photo of a woman spreading open her thighs, or pull down her bra to reveal the dark and dusty pink of a nipple. Those pages were magic, he will say. Yes, yes, I will say. I understand. I cut out hundreds of pictures from the teen magazines, and I taped them up in my bedroom. During one industrious phase in fifth grade, I covered every inch of the available wall space. Centerfold posters: Michael Jackson, Duran Duran, Rob Lowe. Stamp-size cutouts to bridge the gaps between: George Michael, Tom Cruise, Ralph Macchio.

The men in those magazines have pillowy lips and carefully tousled hair and very few secondary-sex characteristics. Somewhere in those years, an older woman told me Mikhail Baryshnikov was very sexy, but he icked me out. That bulge in his tights, like a viper flicking its forked tongue underneath a doily bed. No way. I liked feathery lashes and sparkling eyes. As for what lurked beneath the loose khakis, I did not care to know. I was hoping that anatomically, those guys might be like Ken dolls.

For much of my early adolescence — my tweendom, as it’s now known — I lived inside the golden mists of a fantasy where I dated these man-boys. I was no longer a sensitive egghead invisible to the male population at her school but a pretty teen star who drove around Malibu in the passenger seat of a Corvette convertible. Little kids often create imaginary friends, but I had imaginary boyfriends. Even at 10, I knew there was something incredibly embarrassing about all this. Very few girls are featured in those magazines. Madonna, Nancy McKeon from “Facts of Life,” later replaced by Alyssa Milano from “Who’s the Boss.” Those were the girls the boys liked, because they could hang. I hoped I could hang one day, but in the real world, my life was a girls-only slumber party for a while. I had been exiled from my older brother’s room, and my father was the silent Finnish type. My study of men began in those pages.

Flipping through them now is more than a little disturbing. They are a hectic collection of random data points: His favorite hobbies. (Watching football, video games.) His favorite color. (Blue, green, but usually blue.) One profile on Menudo lists the band’s shoe and pant size. The stories — culled from press releases and questionable interviews — are meant to offer intimacy, but instead become a case study in how little can be used to spin a story.

Didn’t matter to me. As a young girl, I studied those data points, because they formed the secret treasure map that led to being The One. The Corvette and the pinup boyfriend and the enmeshed romance that would greet me when I made it through the blue valley of those middle years. I watched James Bond films because they were a favorite of John Taylor from Duran Duran. I learned about PETA because River Phoenix was passionate about the cause. And this is how I thought grown-up love would work: I learn your favorite color, and then you learn my favorite color. I study you, and then you study me. Won’t this be fun?

Fantasy is a tricky game. It can rescue you from harsh realities. But if you stay too long inside the magic factory, you can become increasingly disappointed by the world.

I was 16 when I got a real, live boyfriend. I could say a million wonderful things about that guy, but back then I also liked to list his failures. Why did he never ask my favorite color? Why didn’t he think more about my needs? It was a colossal frustration to discover men’s brains did not operate like mine. I’d spent a decade cataloguing every one of my crush’s likes and dislikes. What they ate for lunch. What music they liked. And meanwhile, guys had just been … watching football and playing video games?

On Valentine’s Day, he bought me roses and gave me a card signed in his adorable chicken scratch. I squealed with delight, but some part of me was sinking. Roses? That’s all you’ve got? I bedazzled homemade photo albums for him. I dug through Dumpsters (metaphorically) to find just the perfect gift, which was a waste of time, because this holiday meant nothing to him. I would have been better off bedazzling my own photo album, and showing up with a gift certificate to Taco Bell.

And he said, “Anyone who would be in bed with a warm, naked body and still think about a picture in a magazine needs help.”

I never dated that guy. I didn’t date much, for multiple reasons, but one very powerful reason is that guys never lived up to the story I’d written in my mind. College and early adulthood rubbed some of the cartoon hearts from my eyes. I stopped expecting anyone — ever — to ask my favorite color. (Blue.) My sweet, sensitive teen pinups stumbled through years of scandals and multiple addictions. If there is a drug more powerful than fantasy it might be fame. But a few of them made it to the other side. Hats off to you, Rob Lowe. High five, John Stamos.

The teen magazines I loved weren’t so lucky. Teen Beat's long gone, and Bop folded their monthly last year, another victim of a technology age in which the gold bullion they once sold exclusively became pebbles in a stream. Like Playboy and Penthouse, they lost their monopoly on pleasure. Tumblrs and Instagram and TMZ offer way more to your average Belieber and 1D fans than the corporate candy makers ever could.

When I flip through these magazines now, I feel such an odd mix of pride and shame. Why did I fall for this? When can I do it again? I know those stupid magazines warped me, and screwed up my romantic expectations —  but it was so much fun. I felt such a swirl of bliss when I looked through them. Those magazines were like a treehouse built in an alternate universe where a sad kid could always feel special.

I feel the same conflict about Valentine’s Day. I want to hate it. I really do. The path to enlightenment is not paved with romantic clichés bought at CVS. But I am a girl made of candy hearts and chocolate-covered delusions, and perhaps the best thing I can do is be aware of my DNA. I actually love Valentine’s Day. Because it celebrates longing. It celebrates connection. It celebrates the indescribable ache that moves a young girl to cover an entire room with stamp-size photos of boys she will never touch, who touched her anyway.