"The only thing I have left to do, for the last time on a television program: Thank you and goodnight," Dave said 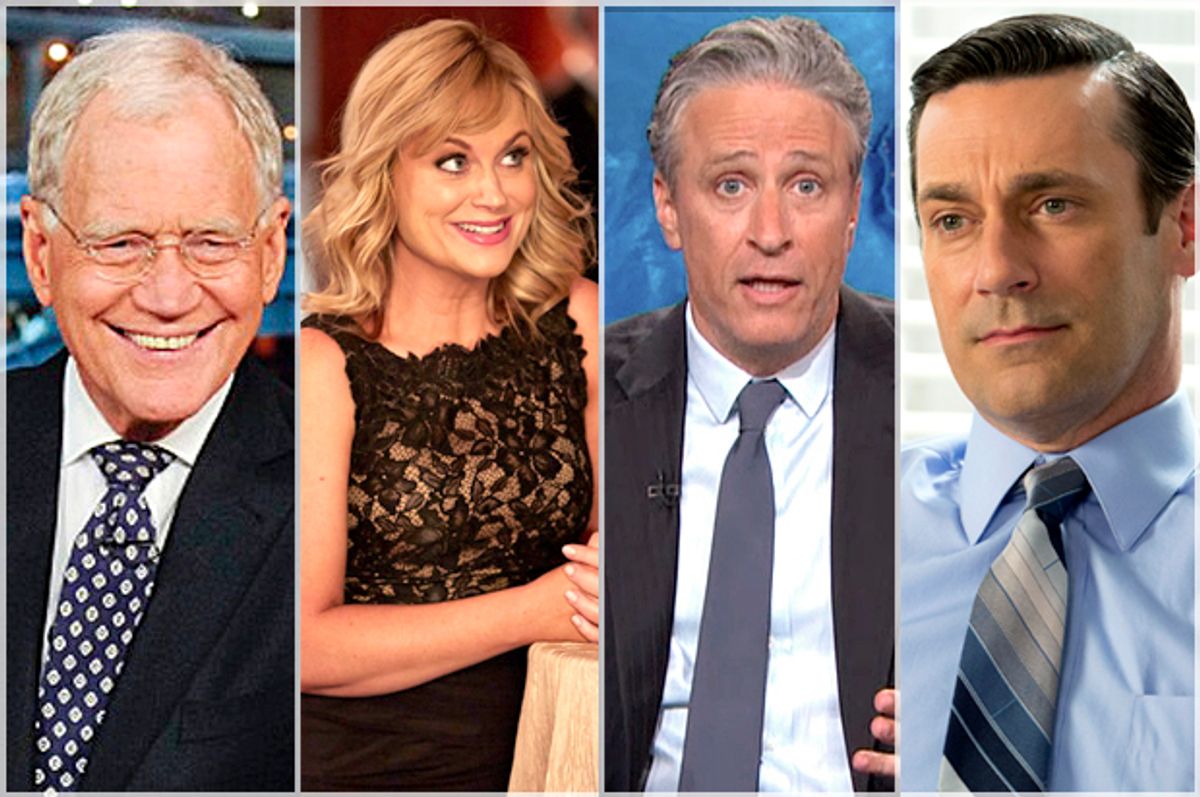 There were several iconic and long-running shows that we said goodbye to this year.

After 12 years and some serious struggles, "Two and a Half Men" finally said adios in a truly epic way. Sadly, CBS has already deleted its page and videos are no longer available, leaving fans only the reruns.

After years of struggling with his identity, Don Draper finally found peace this year as he looked inward on a California cliff. In the end, all he needed was to buy the world a Coke. "Glee" told us we're all in it together. Leslie Knope will achieve her dreams. Of course she will.

And the epic comedians we watched late each night like Jon Stewart and David Letterman left us with tearful goodbyes. While we did say goodbye to the character Stephen Colbert played, the performer moved to CBS and the character is now embodied in Donald Trump.

Mad Men:
"Mother sun, we greet you! We're thankful for the sweetness of the earth. The new day brings new hope. The lives we've led, the lives we get to lead. New day. New ideas. A new you."

Two and a Half Men:
Jake: "And I kept betting on come because......" Walden: "It's amazing you've made so much money with such stupid jokes."

Parks and Recreation:
"And soon, a new, unknown challenge awaits me, which to me, even now, is thrilling because I love the work. Not to say that public service isn’t sexy because it definitely is, but that’s not why we do it. We do it because we get the chance to work hard at work worth doing, alongside a team of people who we love. So I thank those people who walked with me and I thank you for this honor. Now, go find your team and get to work."

Key & Peele:
"And I love these nuts on your chin."

Glee:
“It takes a lot of bravery to look around and see the world not as it is, but as it should be. A world where the quarterback becomes best friends with the gay kid and the girl with the big nose ends up on Broadway. Glee is about finding a world like that, and finding the courage to open up your heart and sing about it. That’s what glee club is. And for the longest time, I thought that was silly, and now I think it’s just about the bravest thing anyone could do.”

David Letterman:
"The only thing I have left to do, for the last time on a television program: Thank you and goodnight."

Stephen Colbert:
"The Colbert Nation! We couldn't have done it without you. Thank you for being such a big part of it. That was fun! OK, that's the show. From eternity, I'm Stephen Colbert, Jon." Jon Stewart: "Thanks for that report, Stephen."

Jon Stewart:
"An artist I really admire once said that he thinks of his career as a long conversation with the audience, a dialogue, and I really like that metaphor for many different reasons. But the main one is because it takes away the idea of finality. This is just a conversation. This show isn’t ending, we’re merely taking a small pause in conversation, a conversation, which by the way I have hogged, and I apologize for that."