Ten powerful albums made mostly on guitar and strings 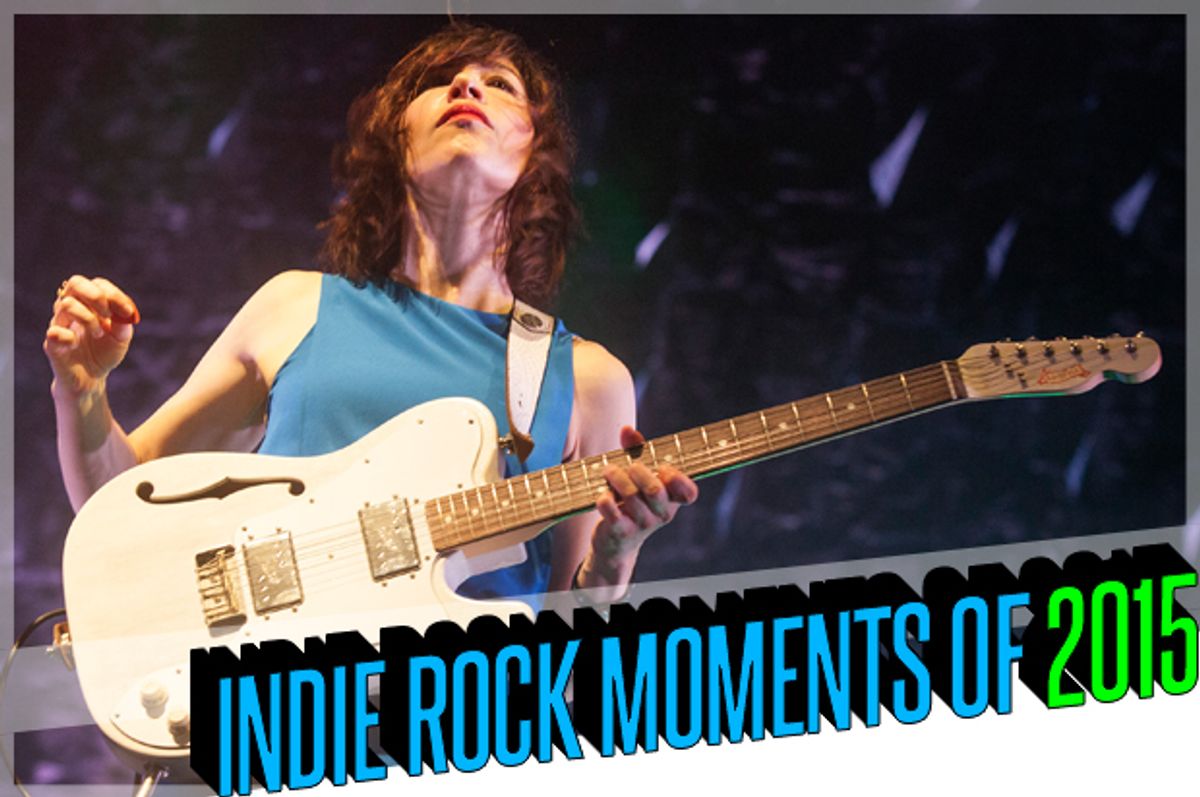 The millenials haven’t conquered everything, have they? This year, a number of artists with roots in the ‘90s made strong showings, especially if you count D’Angelo’s “Black Messiah” (which officially came out at the end of 2014): That record offered groove and brooding and sex in equal measure. In the world of indie rock, as well, older musicians put out some of their best work, alongside newer artists who made a glorious noise. Here are 10 that stuck with me, in no particular order.

"No Cities Left to Love"

How often does a band return after so many years away with as much power and finesse as the first time around? It happened with Pavement – an often-slack live band that discovered its mojo on its own reunion. But Sleater-Kinney came back with what might be its best, most forceful record, as well as a kickass tour. (Success sure didn’t spoil Carrie Brownstein.) Is any American band of any age tighter than Sleater-Kinney sounds here?

This is a relatively mellow record from a band that can be eclectic to the point of incoherence. Deerhunter singer Bradford Cox was hit by a car last year, which may’ve led to the gentler sound on “Fading Frontier.” Chiming guitars, psychedelic textures, and some great hooks (“Breaker,” “Snakeskin”) make this album weirdly invigorating.

For people who think that everything by these guys sounds the same, “Depression Cherry” will probably not convince them. But if your brain responds to the Baltimore duo, the slow organ washes and ethereal vocals, the mix of formless trance and structure is irresistible, and “Depression Cherry” is one of the band’s best. Beach House’s other 2015 album, “Thank Your Lucky Stars,” is also transcendent. Both may make you levitate.

This jaded young Australian is tuneful and tart, nodding to the Velvet Underground and ‘90s indie while still sounding entirely like herself: She has her own breed of deadpan. Of all the musicians on this list, she’s the one whose future seems brightest and the least predictable.

This is traditional acoustic folk that combines sincere, close-harmony vocals with angular, slightly dissonant guitar playing that has more to do with indie rock than with Simon and Garfunkel. Listen to the weeping guitars of the opening song, “Asheville Skies”: If you love what Gillian Welch and David Rawlings do, this is a duo to seek out.

It’s easy to take these guys for granted. This year, the long-running New Jersey band that combines acoustic folk and outbursts of noise stepped turned down the volume a bit and offered a follow-up of sorts to “Fakebook,” the covers-dominated record from 1990. Highlights include a muted rendition of Hank Williams’ “I’m So Lonesome I Could Cry” and a reasonably lively take of the Cure’s “Friday I’m in Love,” both sung by Georgia Hubley.

This record takes a while to hit. And besides Jeff Tweedy’s vocals and the bite of Nels Cline’s guitar – and a stray song like “Magnetized” -- it doesn’t always sound like a Wilco album. The band’s alt-country roots have never seemed more distant. But the twisty melodies and sonic sheen make this a fascinating departure.

Okay, it rarely “rocks,” exactly. And her singing is hard to get over, isn’t it? But the harp-playing, instrumental arrangements, and stretched-out songwriting remains enigmatic and lovely. You can never quite tell where one of these songs will go.

The great guitarist and songwriter is indie by association: His emotional territory sits closer to the Smiths and R.E.M. than to a generational peer like Eric Clapton, and he’s inspired indie figures like Bob Mould and Dinosaur Jr. This year’s “Still,” produced by Jeff Tweedy, includes a lot of his usual Celtic-influenced material as well as the Al Green-inspired “Where’s Your Heart” and a song – “Guitar Heroes” –that honors formative figures like Django Reinhardt and Chuck Berry.

This album about Stevens’ mother, who was schizophrenic and bipolar, and his stepfather is muted, understated, and perfect. “How do I live with your ghost?” he asks. Few records in any genre have this kind of emotional depth: It’s sad and inspiring at the same time.