Please, Jeb, stop talking: Losing the primary will be a mercy for him and his big mouth 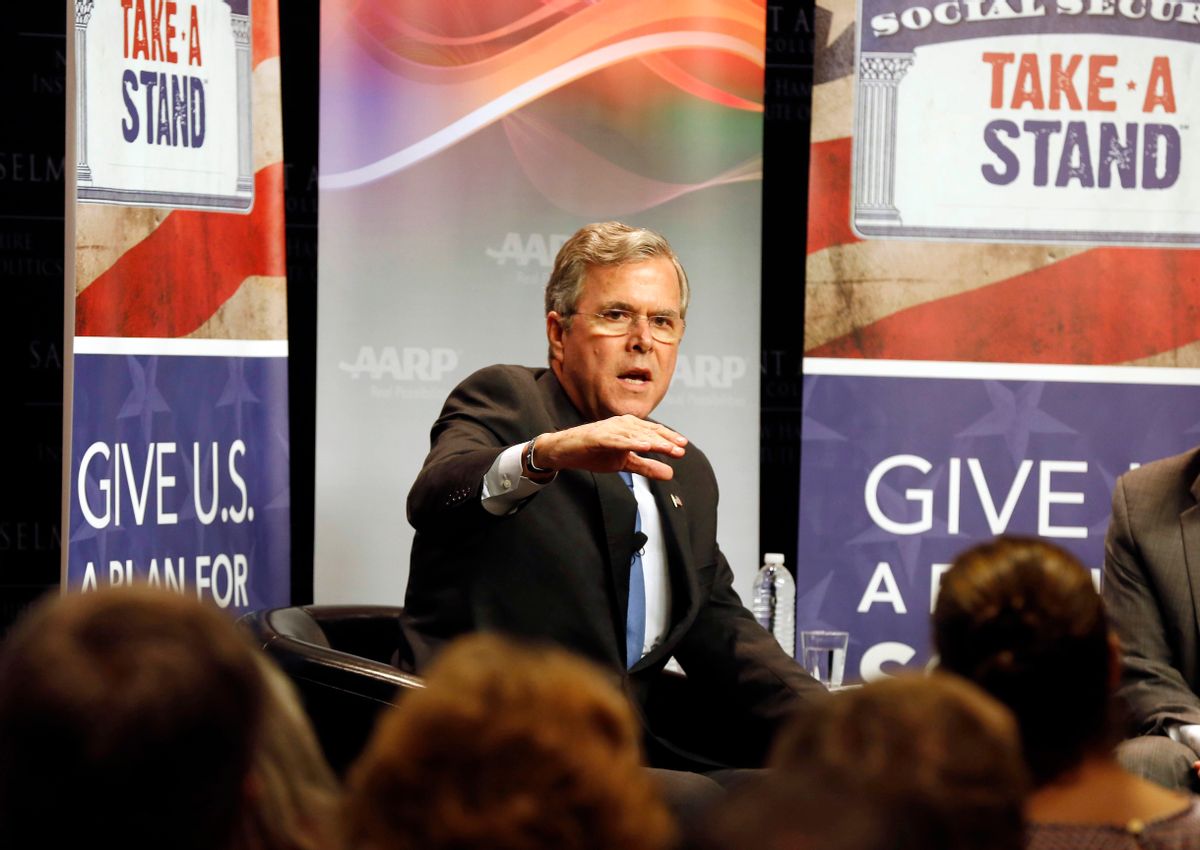 FILE - In this Dec. 8, 2015 file photo, Republican presidential candidate former Florida Gov. Jeb Bush speaks in Manchester, N.H. Bush stubbornly sticks with his wonky approach to the 2016 campaign, even as he continues to falls off the pace. The portion of registered Republican voters who think Bush could win the general election drops to 40 percent in a new Associated Press-GfK poll. (AP Photo/Jim Cole, File) (AP)
--

He may not see it quite yet, but hopefully in a few months time, Jeb Bush will be able to sit down and write Donald Trump and Ted Cruz grateful letters for foreclosing his Republican primary chances quickly.

For as much as it may pain Jeb never get the same chance his brother did to ruin this nation from the highest office in the land, being gently retired from the spotlight cannot be regarded as anything less than a mercy. For Jeb Bush is only better than his father and brother in one area of politics, and this is saying a lot: The ability to say confounding things that no normal human being would ever think is appropriate.

The past 24 hours have borne witness to two such moments, which were called "boners" in a more innocent time. Yesterday, at a meet and greet in South Carolina, Bush was asked about the non-indictment in a Cleveland case where police killed 12-year-old Tamir Rice, who was playing in the park with a toy gun, in a state that supposedly has open carry laws.

Bush started by saying "the process worked," a statement that only makes sense if you think the process should allow police to summarily execute junior high students who have broken no laws and literally have not done anything wrong. But, in the grand tradition of bores everywhere, he kept digging that hole.

"I think that Chicago's got a lot of work to do to rebuild trust. The level of violence is abhorrent," he continued.

Tamir Rice, it is worth noting, was killed in Cleveland. But this gaffe really has a broader WTF quality to it, because even if this incident had happened in Chicago, the general "level of violence" in the city has nothing to do with it. Rice was, it is worth noting once more, 12 years old and playing with a toy. This has nothing to do with any level of violence in any city.

It's obvious that Bush's strategy, when asked about things like the Black Lives Matter movement, is to pivot to Republican-friendly talking points that portray our cities as violent war zones that justify a shoot-first mentality. That narrative is self-evidently racist, but the fact that he pulled it out to frame the shooting of a 12-year-old kid who was just playing in the park drives home that fact with a chilling finality.

That was bad enough, but then it was reported that Bush made a pointless and tasteless joke during his introductory remarks for South Carolina State Senator Katrina Shealy, saying her new nickname was "Hurricane Katrina."

On the Katrina nickname, here is the full quote from Bush after he was introduced by state Sen. Katrina Shealy pic.twitter.com/rU93uYnkZT

When your brother screwed up as badly as George W. Bush did with regards to Hurricane Katrina and the federal response to it, you never, ever want to make jokes about it. Ever. This seems obvious, and yet the magnetic attraction between Jeb Bush's foot and his mouth clearly overrules any sense of propriety or common sense that might linger in his over-privileged brain.

But really, the worst part of it is using "Hurricane Katrina" as a compliment. Or more specifically, crediting that hurricane — which destroyed huge chunks of New Orleans, displaced over half a million people and killed nearly 1,000 people — with "solving problems" is particularly bizarre. Considering that a major charge leveled at the Bush administration in the wake of the hurricane — that they didn't care about the damage, because the majority of victims were black — this particular wording graduates from the level of merely strange to downright offensive.

That's just two incidents in 24 hours. Bush clearly isn't very good at this whole speaking in public thing and there's no indication he's going to get better at it. Which is too bad, because running for president, much less being the president, requires a basic ability to communicate. Which is why it will be a mercy when Bush is bounced out of the primary race early, allowing him to go home and say any fool thing that pops into his head, with only his wife and pets to hear him.