The birth of "extreme cinema": "The Revenant" is an endurance test of suffering for Leonardo DiCaprio -- and moviegoers. But for what?

As directors are pushed to extremes to stand out, movies like "Mad Max: Fury Road" and "The Revenant" become common 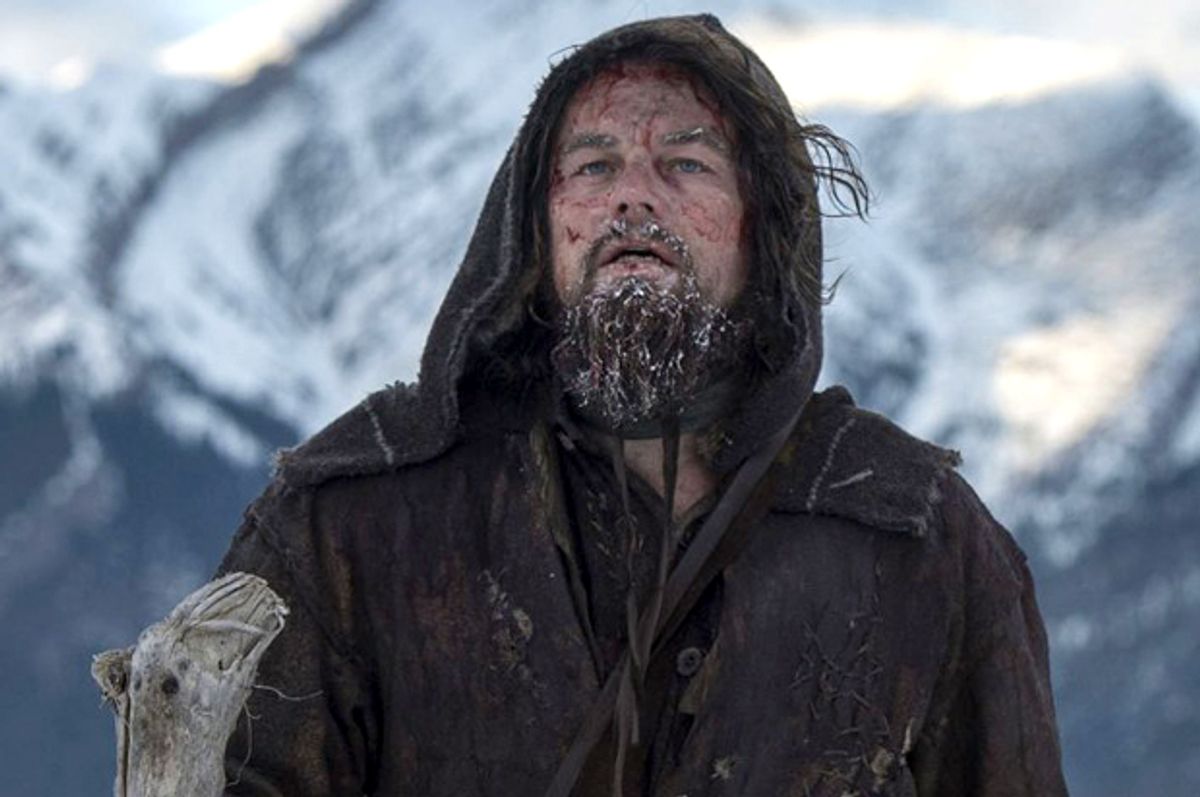 In “The Revenant,” suffering is an extreme sport. No character in film history has been put through quite as much pain and turmoil as Hugh Glass, Leonardo DiCaprio’s nearly wordless protagonist, endures over the course of two-and-a-half blood-soaked hours.

Let us count the many labors of Leonardo DiCaprio (major spoiler alert):

Did we mention he has a dead wife and that the film also features a scalping and castration by shotgun? In one scene, Glass lights a fire to cauterize the wound on his neck with gunpowder, lifting a nearly identical scene from "Rambo III" where Sylvester Stallone illustrates that he doesn’t need medical care. He can tend to his own injuries! To further prove his unassailable manliness, Rambo also gives himself stitches in “First Blood.” In “The Revenant,” every scene is that scene—except instead of suffering for his masculinity, DiCaprio is killing himself for the sake of “art.”

The set for the “The Revenant,” directed by Alejandro González Iñárritu, wasn’t any friendlier. “Given cinematographer Emmanuel ‘Chivo’ Lubezki's decision only to use natural light, there was a short window each day when the production could film,” said the Hollywood Reporter’s Kim Masters. Because the film takes place in the tundra-like conditions of French Canada in the 1820s, Lubezki and his team were forced to film on multiple continents, constantly chasing the most appropriately snowy conditions to shoot in. DiCaprio was forced to eat raw bison liver and wade through frozen rivers, reportedly risking hypothermia and even death.

Those might seem like absurd lengths to go just to film a movie, but in today’s cinema, the extreme is becoming commonplace. In a crowded marketplace, filmmakers are being pushed to increasing extremes to stand out. After all, “The Revenant” wasn’t the only 2015 film that pushed its actors to the brink: In “Mad Max: Fury Road,” director George Miller reportedly shot more than 400 hours of footage in the harsh conditions of the Namib Desert; the production was forced to relocate from New South Wales after an unusual amount of rainfall made the landscape too lush—not a great stand-in for the post-apocalypse.

Let’s not forget that the action itself was a nearly impossible feat to pull off. “Fury Road” consists of what is nearly one unbroken chase scene, most of which takes place on enormous two-ton rigs, complete with heavy metal guitar players blasting enormous flames as they rock out. If film critics called “Mad Max: Fury Road” a miracle, that’s because on top of being one of the great films of the year—or any year—it’s a wonder the movie ever got finished at all. Miller has been working on the damn thing since it was originally planned as a TV series back in the mid-'90s. It’s been in production so long that it was delayed both by Heath Ledger’s death and Sept. 11.

These past few years have witnessed the birth of an “extreme cinema,” where filmmakers like Miller and Iñárritu are increasingly testing the boundaries of the medium. To make “The Walk” and “Gravity,” Robert Zemeckis and Alfonso Cuarón had to invent their own technology to take us on a tightrope across the twin towers and deep into the darkness of space, respectively. Richard Linklater’s “Boyhood” rewrote the rules of what film narrative could do by condensing 12 years of a life that appears to unfold before your eyes.

It’s impossible to divorce these films from the way they are made. When viewing a film like “Boyhood”—or even Iñárritu’s own “Birdman”—you are taking part in an experiment as much as you are watching the action unfold on-screen. But what makes “Boyhood” so effective is that its process serves a distinct purpose, other than drawing attention to the filmmakers’ craft in pulling off the stunt. Film critic David Edelstein put it best in a review for New York magazine. After seeing “Boyhood,” he wrote: “I know movies can do something that just last week I didn’t. They can make time visible.”

“Boyhood” makes extreme cinema into a form of poetry, but too often process-oriented films do more than let the ends justify the means. The means are the only real justification for the film at all. In an acute example, let’s take “The Human Centipede”: What is the purpose of a movie like “The Final Sequence,” the third and final entry in Tom Six’s unlikely ass-to-mouth franchise? The only reason it exists at all is to top previous entries in the series, staging a 500-person centipede as massive as it is horrifically appalling. Why make “A Serbian Film” or “Hostel Part II”?

But the torture porn isn’t alone in struggling to transcend its process. Last year’s “Birdman”—the reigning Oscar-winner for best picture—is a film entirely driven by spectacle. The film appears to unfold in a single, uninterrupted take (aping one-shot movies like “Russian Ark”), seamlessly edited by Emmanuel Lubezki (again) to give the appearance of continuity. It’s a gorgeous ballet of virtuoso camerawork, and star Michael Keaton told Entertainment Weekly that the filming put an enormous burden on the cast and crew. “Anything—a misremembered line, an extra step taken, a camera operator stumbling on a stair or veering off course or out of focus—could blow a take, rendering the first several minutes unusable even if they had been perfect,” he said.

All of that effort should be in service of greater meaning. What are Lubezki’s cameras searching in Broadway’s backstages? For a movie that intends to say so much—about celebrity in the age of social media and our desire to be remembered—it’s a commentary on the entertainment industry that’s surprisingly short on commentary. Although Gawker’s Rich Juzwiak called the ideas in “Birdman” “muddled,” even that’s a bit charitable. Because the film is constantly in motion, it never takes the time to stop on any of its many themes—presumably because meaning is somewhat beside the point. In “Birdman,” a message is attached to the mirror in Riggan’s (Michael Keaton) dressing room: “A thing is a thing, not what is said of that thing.”

Therein lies the problem with extremophilia—at its worst, it not only says nothing but insists that it’s not the film’s responsibility to say something. In Iñárritu’s world, the artist’s job is to push boundaries, not to ask questions; he goes for broke instead of wondering why something is broken. I agree that not every film needs to be a grand statement on man’s purpose (if every movie were “The Tree of Life,” I’d throw myself off a cliff with Hugh Glass’ horse), but the form should have some kind of substance. Otherwise, why bother spending $135 million to trek into the wilderness in 40-degree below weather?

If “The Revenant” has a theme, it’s about as intelligible as most of its protagonist’s dialogue. For all the poetic, haunting images captured by Lubezki’s arresting gaze, Iñárritu adds little of his own poetry to the mix; the movie basically amounts to a really arty episode of “Running Wild With Bear Grylls.” When Iñárritu described his filmmaking process to the Hollywood Reporter, he said that he knew it would be controversial (many on set quit while filming), but the extremity would prove worth it. “When you see the film, you will see the scale of it,” he told THR. “And you will say, ‘Wow.’”

It seems that 15 years into his career, Iñárritu has learned to say little more as an artist than one word. If he’s going to keep making Leonardo DiCaprio and Michael Keaton suffer for our sins, he needs to eventually tell us why.