There were plenty of political players, both left and right, making boneheaded mistakes in 2015 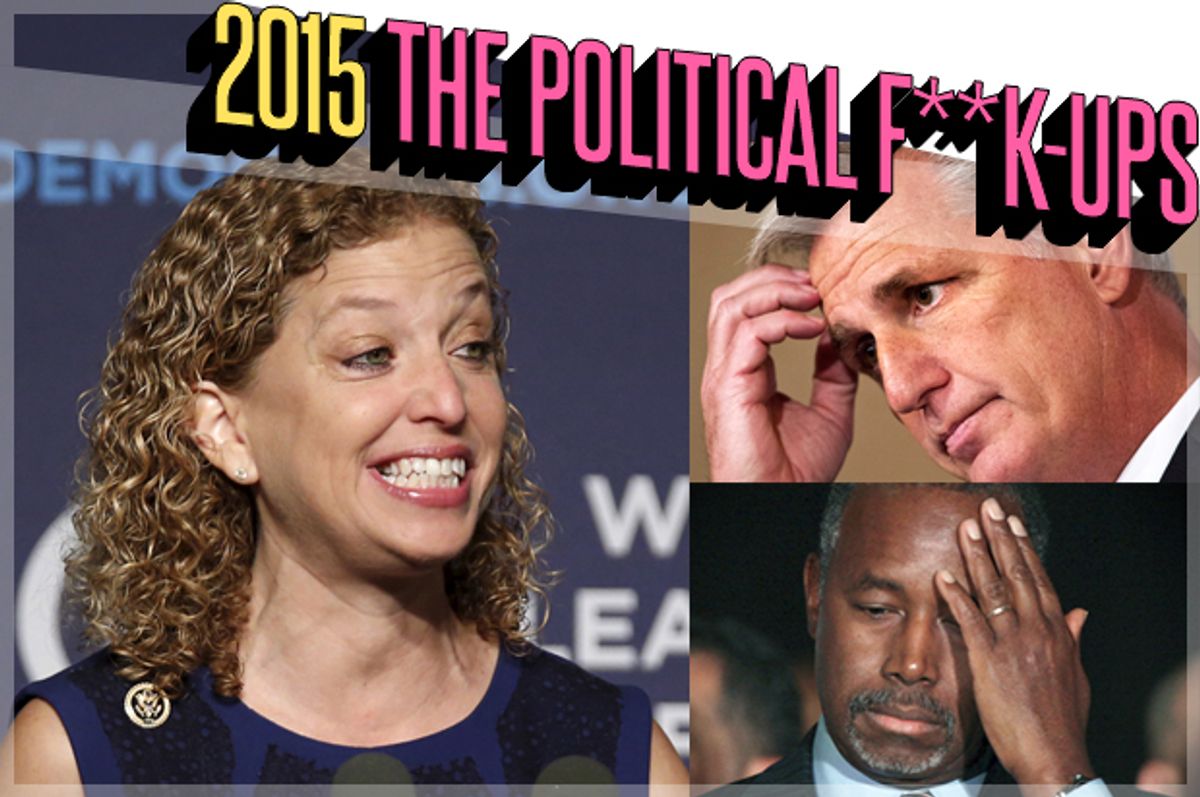 The big story of 2015 appears to be how Donald Trump can do no wrong, at least in the eyes of his supporters. But a lot of other political players this year attempted political maneuvers that ended up backfiring, sometimes wildly. Here are the five best own goals of 2015.

1) Kevin McCarthy. After John Boehner was pushed to resign his role as speaker of the House by hard-line conservatives with incomprehensible demands, Kevin McCarthy, the House majority leader, was the happy idiot slated to take that thankless role. He would have gotten it, too, if he hadn't admitted, on live television, that the Benghazi hearings were the political stunt everyone knew they were, rather than the moral crusade Republicans were pretending they were.

"Everybody thought Hillary Clinton was unbeatable, right? But we put together a Benghazi special committee, a select committee. What are her numbers today? Her numbers are dropping," McCarthy gleefully told Sean Hannity of Fox News with the confidence of a man unaware that his political future was sliding out of his fingers. He pulled his name out of the running soon after.

Republicans tried to rescue the Benghazi hearings, of course, insisting that McCarthy didn't know what he was talking about. They also tried Clinton yet again in front of the Benghazi committee in the vain hopes that merely being questioned made her look guilty of something. But with their cover blown, the Republican efforts to pretend that there are actual concerns about her handling of Benghazi fell flat. It was undeniable that it was a show trial, and Clinton looked like a survivor who triumphed over her petty political enemies.

2) Debbie Wasserman Schultz. The Republicans have held multiple thousands of debates this primary season, all on weeknights, a move that has helped their candidates get heavy media exposure of the sort that will help quite a bit when the general election comes around. But Schulz, the head of the Democratic National Committee, has arranged to hold two of the debates on a Saturday night--one on the weekend that the new "Star Wars" movie came out--which guaranteed lower ratings and reduced media coverage overall.

The common wisdom is that Schultz is doing this to help out Clinton by reducing voter exposure to her main competition, Bernie Sanders. If so, the move is backfiring. Yes, Sanders has done well in the debates, but overall, the debates have served the Clinton campaign the most. It's not just that Clinton is a good debater, but that Sanders' inherent geniality has taken the edge off what could have been a much uglier primary season. By hiding the debates, Schultz took away a major opportunity not just for Clinton to show off her chops, but for Clinton and Sanders (and, occasionally, Martin O'Malley) to remind the public at large how much more competent, cooperative and mature the Democrats are compared to the Republicans.

3) Kim Davis and her lawyers. After months of legal battles and a stint in jail, Kentucky county clerk Kim Davis' grandstand against legal gay marriage ended up being ... a minor, inconsequential law passed in Kentucky that allows counties to issue marriage licenses without the county clerk's signature on it.

If ever there was a pyrrhic victory in the culture wars, this is it. When Davis first broke onto the national scene for refusing to let same-sex couples marry in her county, it was clear that she and her lawyers had grand schemes and bold ambitions to find some way to stop legal gay marriage despite a decisive Supreme Court victory in favor of legalization. The strategy--to use "religious liberty" as a cover to deny couples marriage licenses--clearly had its roots in the old Jim Crow strategies of the past that were used to deny black people the vote while maintaining the pretense that voting was legal.

In the end, though, Davis was not able to stop anyone from getting married, but was forced to eat, along with some crow, a compromise that supposedly met her demands (not signing the licenses) without actually doing a damn thing to prevent the marriages her move was supposed to prevent. Moreover, this entire stunt mostly served to demonstrate to the country how petty and bigoted anti-gay forces are.

4) Jason Chaffetz. Like the Benghazi hearings, the House's Planned Parenthood hearings were held out by Republicans as a sincere effort to discover some kind of "truth" about the organization, but were rather quickly revealed to be nothing but empty theater. That much was obvious going in, as the hearings were justified by the existence of anti-choice videos that were so thoroughly discredited as hoaxes by the time the hearings started that they were barely mentioned during the multiple-hour interrogation that Planned Parenthood CEO Cecile Richards was subjected to.

But it was Chaffetz, in his role as the chairmen of the House Oversight committee, that really wiped away any remaining doubt that there was a legitimate reason for these hearings. During the hearings, Chaffetz whipped out this chart clearly meant to make you believe that Planned Parenthood does more abortions than cancer screenings:

But if you squint really closely, you can see that actually, the numbers show that Planned Parenthood does nearly three times as many cancer screenings as abortions. There are arrows there, but they have no relationship to each other. The desperation to smear Planned Parenthood had grown so deep that Republicans started to pretend they don't know how charts work.

This naked and frankly thirsty distortion of the evidence was a synecdoche for the entire conservative assault on Planned Parenthood, which is built on shameless lying and clearly sex-phobic hysterics. As with Clinton in the Benghazi hearings, the whole charade just ended up making Richards look like a hero for enduring hours of nonsense and false accusations at the hands of a bunch of witch-hunting Puritans.

After watching and listening to Donald Trump since he announced his candidacy for president, we have decided we won't report on Trump's campaign as part of The Huffington Post's political coverage. Instead, we will cover his campaign as part of our Entertainment section. Our reason is simple: Trump's campaign is a sideshow. We won't take the bait. If you are interested in what The Donald has to say, you'll find it next to our stories on the Kardashians and The Bachelorette.

In December, they finally took it back, admitting that Trump really is the front-runner and has been for months and that the proto-fascist movement he's heading is a real phenomenon that cannot be dismissed or ignored.

While the Huffington Post's behavior was extreme, it represented a general failure of the political media to grasp the very seriousness that is Trump's campaign. Perhaps it was impossible to have the necessary foresight. After all, Trump  had flirted with running many times before, but it was so clearly just a move to get attention that it seemed that his actual run must be the same thing.

But the failure to take it seriously enough still weighs heavily. The overwhelming racism pouring out of Trump and his supporters is terrifying on its own, but now things have gotten violent. There's been violence at Trump rallies, which he has encouraged. There's been a spike in anti-Muslim violence, one that probably was going to happen anyway but which has certainly not been helped by Trump demonizing Muslims. Even as early as August, two men who beat up a homeless person cited Trump as their inspiration.

If he wins the nomination, he will probably lose the general. But the fact that someone who is so openly vile is doing so well in Republican politics is the story of the year, and the lengths that many media outlets went to ignore that fact will go down as one of the biggest political failures of the year.