Israel's barrier in the occupied West Bank defies international law, and is called an "apartheid wall" by critics 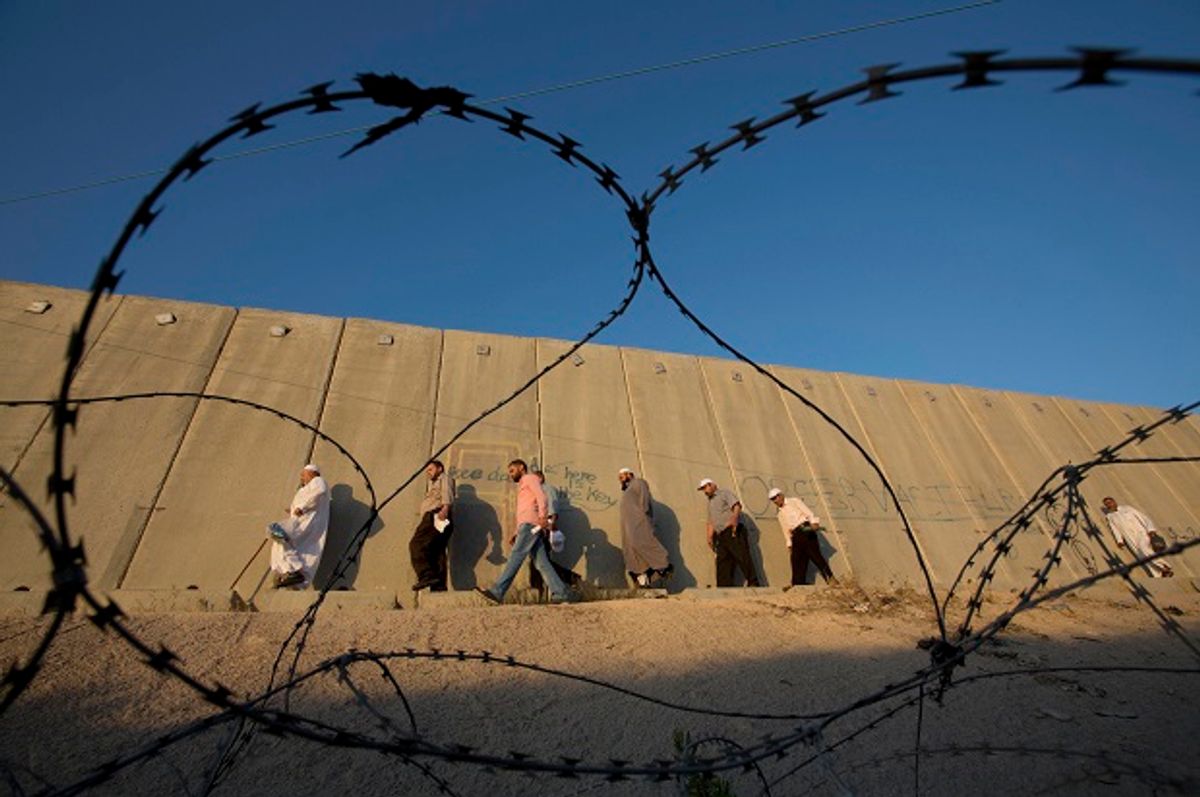 Far-right Republican presidential candidate Donald Trump has exploited anti-Muslim prejudice in order to appeal to American voters. In December, citing a debunked study by an extremist right-wing think tank, Trump called for banning all Muslims from entering the U.S., with a "total and complete shutdown" of the borders. This led critics worldwide to compare Trump to fascist leaders.

Trump, nevertheless, has stood by his extreme policies in 2016. On Jan. 2, the far-right presidential candidate adopted a new strategy to defend his position: Modeling policies after Israel, the U.S.'s closest ally in the Middle East.

The billionaire real estate mogul took to Twitter to criticize Hillary Clinton for opposing his ban on Muslims. "Hillary Clinton said that it is O.K. to ban Muslims from Israel by building a WALL, but not O.K. to do so in the U.S. We must be vigilant!" Trump tweeted.

Trump is referencing the separation wall Israel has constructed alongside and within the borders of the West Bank, which has been illegally occupied by the Israeli military since 1967. The majority of the barrier is in fact inside occupied territory, and prevents Palestinians from entering Israel.

Israel says it built the wall for security, to prevent attacks from Palestinian militants. Critics say Israel is using security as an excuse and unilaterally building a wall in order to illegally annex occupied Palestinian land.

The separation wall is illegal under international law. The International Court of Justice ruled 14-to-one in 2004 that the "construction of the wall being built by Israel, the occupying Power, in the Occupied Palestinian Territory, including in and around East Jerusalem, and its associated régime, are contrary to international law."

Explaining its ruling, the International Court of Justice noted, "Israel cannot rely on a right of self-defence or on a state of necessity in order to preclude the wrongfulness of the construction of the wall." The court furthermore pointed out that all foreign countries "are under an obligation not to recognize the illegal situation resulting from the construction of the wall and not to render aid or assistance in maintaining the situation created by such construction."

In 2004, the U.N. General Assembly additionally overwhelmingly voted in favor of a resolution that condemned Israel's illegal separation barrier. 150 countries supported the resolution -- including all 25 members of the E.U. Just six voted against it, including Israel, the U.S., Australia, and three tiny U.S.-allied Micronesian island nations.

Leading human rights organizations have also maintained that the wall is illegal and inhumane. Amnesty International has insisted the barrier was built for political, not security, purposes. The leading right groups wrote in 2004:

"[T]he fence/wall is not being built between Israel and the Occupied Territories but mostly (close to 90%) inside the West Bank, cutting off communities and families from each other, separating Palestinians from their land, work, education and health care facilities and other essential services. This, in order to facilitate passage between Israel and more than 50 illegal Israeli settlements located in the West Bank. The route of the fence/wall inside the West Bank is purportedly aimed at protecting unlawful Israeli settlements and results in unlawful destruction and appropriation of Palestinian property and other human rights violations. 'Military/security needs' cannot be invoked to justify measures that benefit unlawful Israeli settlements at the expense of the occupied Palestinian population. In its present configuration, the fence/wall violates Israel's obligations under international law."

The International Committee Red Cross has likewise said that Israel's separation wall violates international law and the Geneva Conventions. The barrier goes "far beyond what is permissible for an occupying power," and "runs counter to Israel's obligation under [international humanitarian law] to ensure the humane treatment and well-being of the civilian population living under its occupation," the humanitarian organization says.

Despite the clear rulings of international legal bodies and human rights groups, Israel and the U.S. have insisted the wall is necessary to ensure Israeli security. A 2004 poll found that 84 of Israeli Jews support the separation barrier.

Critics have described the barrier as an "apartheid wall." The Palestinian-Israeli activist group Stop the Wall, also known as the Palestinian Grassroots Anti-Apartheid Wall Campaign, says it "considers the Wall as an integral project of Israel's occupation, colonialism and apartheid and hence understands the struggle against the Wall as part of the overall effort of the Palestinian people to achieve self-determination, equality and the return of the refugees."

In his reference to Hillary Clinton in the aforementioned tweet, Trump was acknowledging the Democratic presidential candidate's staunch support for Israel.

Clinton published an open letter in The Forward in November in which she defended right-wing Israeli Prime Minister Benjamin Netanyahu and insisted she would "reaffirm the unbreakable bonds of friendship and unity between the people and governments of the United States and Israel."

Hillary Clinton is a close ally and friend of Haim Saban, a media mogul billionaire -- among the world's 400 richest people -- who has been described as a "Koch Brother of Israel." Clinton sent a letter to Saban in July, in which she smeared and vilified Boycott, Divestment, and Sanctions (BDS), a nonviolent global grassroots movement called for by Palestinian civil society that seeks to pressure Israel, through peaceful economic measures, to comply with international law and end its illegal occupation and oppression of the indigenous Palestinian people. Clinton asked Saban for advice on how to undermine BDS, emphasizing "how crucial it is for America to defend Israel at every turn."

In her letter to the billionaire, Clinton characterized U.N. resolutions that call on Israel to respect international law and stop its illegal activity as "anti-Israel resolutions." Salon previously exposed how the U.S. State Department, under Clinton's leadership, boasted that it "deferred" U.N. action on Israeli war crimes in hopes of "reframing the debate" and "moving away from the U.N."

"I defended Israel from isolation and attacks at the United Nations and other international settings, including opposing the biased Goldstone report," Clinton furthermore boasted in the November open letter.

Saban characterized Clinton as the ideal U.S. presidential candidate for Israel in an interview with the right-wing Israeli publication The Jerusalem Post in May 2015.

Donald Trump was himself planning to visit with Israel's hard-line right-wing leader Netanyahu in December, but cancelled his trip when the prime minister criticized Trump's proposal to ban Muslims.

Trump has not said much about Israel, and has articulated misunderstandings about basic political issues in the Middle East. In September, he confused Palestinian Sunni Islamist party Hamas with Shia Islamist group Hezbollah.

Despite his confusion about Middle Eastern politics, Trump he made it clear that he staunchly champions Israel.

On Fox News in November, Trump affirmed support for the U.S. ally and claimed "there has never been a greater enemy to Israel than Barack Obama."

In a 2011 BBC interview with renowned British journalist Jeremy Paxman, prominent political analyst and scholar Noam Chomsky said that, on Israel-Palestine, Obama's "position is shocking." Chomsky pointed out that the Obama administration, at that time, essentially gave Israel carte blanche to continue its policies.

During Israel's 51-day war on Gaza in the summer of 2014, Obama steadfastly defended the close U.S. ally, despite the fact that human rights organizations and the U.N. accused Israel of committing war crimes and deliberately targeting civilians. More than 2,250 Palestinians, and 550 children, were killed in the war, the vast majority of whom were civilians, according to the U.N. Israel bombed hospitals, civilian neighborhoods, schools, U.N. shelters, mosques, and churches. In spite of these documented atrocities, the Obama administration boosted military aid to Israel during the war.

The U.S. gives an average of more than $3 billion in military aid to Israel each year. The Obama administration has considered increasing this figure to $5 billion per year, or almost $14 million per day.