I am the Fox News atheist: "Some call me a militant atheist. Others call me a dick. I am neither"

I believe that religion poisons everything and I argue for truth and honesty, no matter the audience. It is working 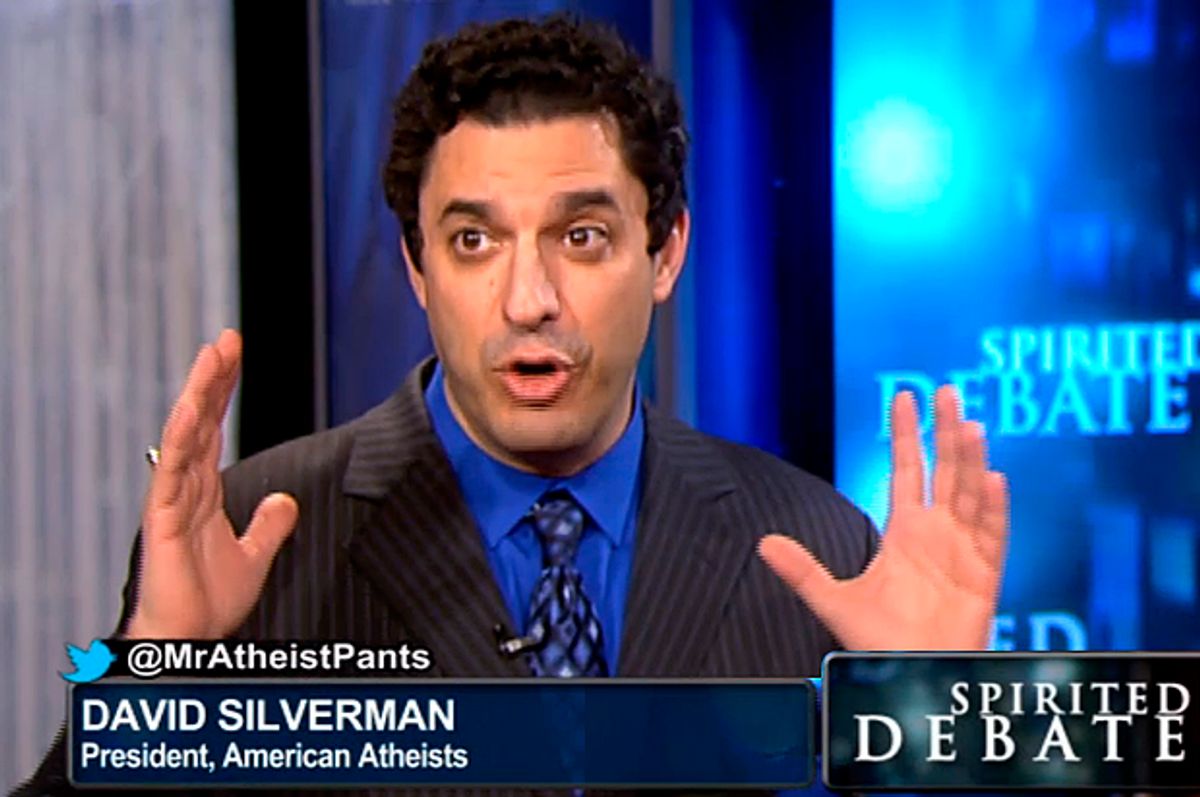 Excerpted from "FIGHTING GOD: An Atheist Manifesto For a Religious World"

Once again, abherrant [sic] groups like you and the homosexuals are complaining that you don’t have a golden cup and seat at the table. Listen, in America, you are allowed to exist without persecution. Any other right that you request is another step towards the hedonistic values that contributed to the destruction of Sodom and Gomorrah. The closer America gets as a society to honoring your seat at the table is yet another step towards the decline of western civilization, and deep down inside you know it. You are deviants. —An e-mail to American Atheists, September 2012

I wish I were wrong.

I wish all the good guys went to heaven, the bad guys somehow justly paid for their crimes, and everyone (especially my daughter) lived forever. Indeed, not a single person on earth wants people to live forever more than I do. I also wish the World Trade Center still stood, hunger was eradicated, and that my mother had lived long enough to see this book published.

But wishing doesn’t make it true. We live in the real world, and I make my living telling the truth.

I’m that atheist guy—the guy with the atheist shirt and/or jacket and/or baseball cap in the airport or at a street fair. I’m not talking about subtle clothing that someone might pass by and not notice, either. I wear the word atheist in big letters. I cannot be missed, quite by design. I talk to people who ask about what my clothes say (which happens more and more these days), answer their questions as honestly and clearly as possible, and sometimes even have on-the- spot debates. I’m a walking, talking atheist billboard. I love being “that guy” (you should try it).

I’m also “that atheist guy on TV,” often Fox News, who espouses such horrible concepts as religious equality and separation of religion and government (same thing), usually to a talking head or audience that simply does not understand the concept and tries to trip me up rather than actually consider that I might be right.

I promote no harm, violence, or vandalism, opting instead to fight for equality of all people through truth and honesty. I think that makes me That Pretty Good Guy Who Gets Called a Dick So Often He Gets Angry and Writes a Book About It. (My publisher thought such a title might be a bit too long for the cover, though.)

I’ve been a walking, talking atheist billboard for nearly twenty years. I have had many conversations with strangers about atheism, as you would expect, and as I intend. In the early years, most of my on-the-street conversations were confrontational and somewhat less than civil. I’ve received more than my fair share of the stereotypical “You’re going to hell” comments, usually delivered in a hit-and-run style, whereby people deliver their “good news” that I will be spending eternity being tortured and then run away before I can continue the conversation.

However, in more recent years, I’ve begun receiving more and more positive comments, and the negativity I once received—in every airport, in every city—has fallen silent. Indeed, the hostility that I used to encounter nearly every time I stepped out the door never occurs anymore.

Because we are winning.

In this enduring battle for freedom from the Lie of God (a phrase I use to describe all deities and the lies, empty promises, and threats that surround them), we are finally winning, mainly because, thanks to the Internet, we are finally capable of trying. We, the atheists of America, are on the cusp of achieving equality. We have no money compared to religion. We have no power compared to religion. Yet our numbers are growing while theirs are shrinking, because it’s not just about money or power, but about truth. Truth beats money and power, and when it comes to religion, atheists have a monopoly on truth.

Atheists like me are what I call conclusionary. We have concluded that gods are myths because we’ve seen sufficient evidence and heard or read sufficient arguments to convince us there are no gods. But this is not stubbornness. If any god, anywhere, were proven real even once, I would convert, quit my job, and donate all the proceeds of this book to that correct god’s religion. Of course, that has never happened, and there is no reason to expect that it will. I am convinced this mentality holds true for almost all atheists everywhere— if there were any proof of any god, there would be practically no atheists anywhere. I search for truth, not just confirmation of preferred belief.

But religion is not just incorrect, it is malevolent. It ruins lives, splits families, and justifies hatred and bigotry, all while claiming to be the source of morality. People die and suffer needlessly because of religion; such a waste.

As the late Christopher Hitchens said, “Religion poisons everything,” and that seems almost literal when we are talking about the minds it infects. It makes good people do bad things while thinking they are doing good—effectively turning good people into bad people, at least sometimes. Religion deserves to die.

Some (too many?) people call me a dick because I challenge the absurd notion that religion deserves respect by default. But religion is wrong for demanding respect simply for being, and even more wrong for demanding never to be questioned. Indeed, it is my duty as an American, as an atheist, and as a nice person to do what I can to take religion down—not by force, not by law, but by truth.

And the truth is quite simple: all religions are lies, and all believers are victims.