"I'd like it if you'd go back to the hotel with me": My life as a female cabbie

I might have driven a cab forever, but one evening, a stranger's proposition made me rethink everything 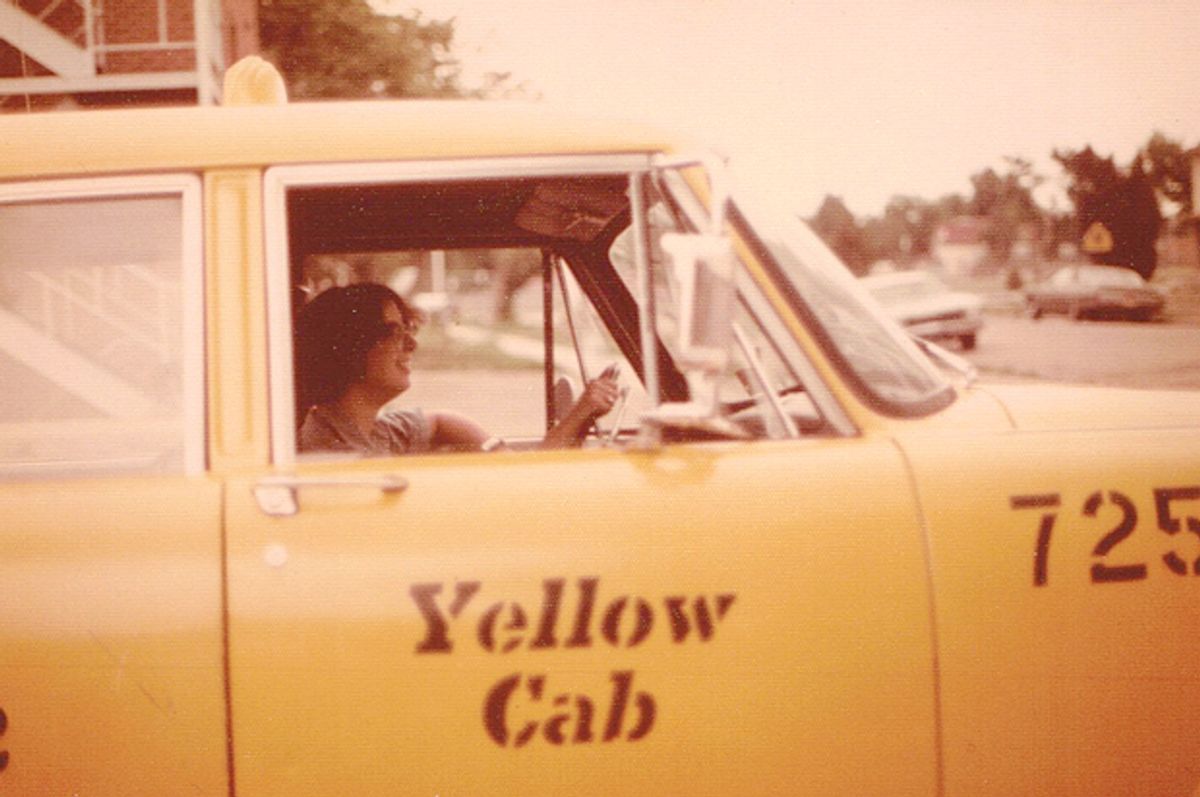 Would I ever accept money for sex? An avid feminist, I’d never even considered the possibility until my handsome passenger nonchalantly tossed two one-hundred-dollar-bills on the front seat of the cab I was driving and said, “I’d like it if you’d go back to the hotel with me.” I’d been sitting in the taxi line in front of the Brown Palace, Denver’s classiest hotel, in my Yellow Cab numbered 666, or “Sixes” as the dispatcher called it. Interested in numerology, I knew that 666 was a significant number, symbolizing evil, our fall from grace, as well as sex. At 25, I was living in a commune, and wasn’t bothered by the number on my taxi. I was just happy to have the cab at all. Old and run-down as it was, and possibly also due to its enigmatic number, none of the regular drivers wanted it, so it was mine.

In 1975, the City and County of Denver issued me an eight-by-six-inch laminated taxicab license emblazoned with a headshot of me sporting long brown hair and granny glasses. Some called me attractive with my olive skin and amiable smile, but I was too insecure to believe them. Still, I was proud of that permit. It represented freedom to make a living on my own schedule. I believed I was helping to forge new territory for women in the work force, being one of five women out of hundreds of drivers employed by the Yellow Cab Company.  With my rent at $35 a month, and my diet vegetarian, it was easy to get by. Driving a cab allowed me to earn an income while giving me time to pursue kung fu, pottery making, and camping in the Rocky Mountains.

Most importantly, I really liked the job. Given my short stature and petite build, I must have made quite a picture behind the wheel of the iconic Checker cab. Engulfed in its massive chassis, I would coast down 14th Avenue with its synchronized lights, not having to stop for miles, with the glorious Rockies ahead of me, almost surreal in their beauty. Those mountains served as my guidepost. In an age of personal seeking, I always knew which direction was west.

Among taxi drivers, the cab was often referred to as a confessional on wheels. People opened up in the privacy and anonymity of the back seat. In Denver at that time, livery cars did not have the Plexiglas partition between driver and passenger. Lacking a physical barrier allowed for a connection between cabbie and rider. Sometimes the cab became psychotherapy on wheels; as I drove, I gave advice or served as a sounding board for passengers' problems.

The vehicle afforded me anonymity as well. Passengers didn’t see me as an NYU graduate, counterculture hippie who’d been to Woodstock and spent two days in a Washington D.C. jail for protesting the Vietnam War. I was just their driver taking them where they wanted to go.

But on one cool Colorado September evening, in hopped a handsome, smartly dressed man in his mid-thirties, spirited and outgoing. He appeared wholesome, with his blond hair neatly parted on the side and swept across the top of his forehead. He had blue eyes, an engaging smile, and wore preppy chinos, polo shirt and pullover. He looked like a shorter, hunkier Robert Redford, immediately getting more of my attention than I usually gave to the next fare.

“Do you know a bar where I can hear a rock band?”he asked with a smile.

While we were en route he said he was married and showed me a picture of his two young children. He worked for a Texas oil company and was in town on business for a day. He was so affable and chatty that I told d him a little about myself as well: that I had moved here after college in New York and the activities I was now pursuing in Colorado. Then came his proposition.

At first I thought he was joking. Here was someone who was good-looking, wealthy, and would have no problem picking up some classy young woman for a one-night stand. Yet, as plain and unsophisticated as I perceived myself to be, he was offering to pay me to sleep with him. “You’re kidding, right?” I asked.

“I’m very serious. You can take the money.”

I pulled the cab over to the side of the road and turned around to return his cash. I was struck by how attracted I was to him. His fair, clean-cut appearance formed the yin to the yang of my dark, bohemian, Mediterranean features.

For a moment, neither of us spoke while I considered. Two hundred dollars was a lot to me. As a cabbie I made $40 a day. It would have taken me a week to earn that much. But being paid cold, hard cash for sex? I should have been insulted. Nevertheless, I found him quite attractive. I was already taken with his personality. His aura of wealth and privilege impressed me as well. I had never stayed at the elegant Brown Palace, and here was an opportunity. Yet he had a wife. Still, I’d come of age during the sexual revolution, and lacked respect for the institution of marriage. Still, I felt certain that I posed no threat to their relationship. And yet, his monetary offer was off-putting. I didn’t really know how to react. What harm would there be in discussing it? I parked the taxi, handed him back the two bills, and with the meter still running (at his insistence), we walked into the bar.

I liked hearing that he used to play drums in a rock band at Stanford. I got the feeling he was trying to impress me, prove that he wasn’t the typical Texas oil tycoon, the rich capitalist exploiting the earth’s resources. He was well-educated, but cool because he was once in a band. It was working. He started to drum on the table along with the music. Despite his playful drumming, I saw the disparity between us. He was in his preppy clothes, I was in my cabbie attire: flannel shirt, turtle neck, bell-bottom jeans, Birkenstock shoes, standard hippie uniform. Notwithstanding his attempts to seem hip and to identify with me, he was conspicuously from another world. Besides, I wasn’t supposed to trust anyone over 30.

“Ya know, I can guarantee you the Big O,” he blurted.

I found this statement a bit crass. This whole situation was a bit crass. I had never heard of an orgasm referred to in that way. Certainly, most of the guys I’d gone out with were more interested in their own Big O than in mine. My last boyfriend had hastened our breakup when he said if I wasn’t having orgasm, that was my problem, not his or ours.

I told my fare I would take him back to the hotel, drop off the cab, drive home and call him from my house. Thinking this would give me more time to ruminate, I put Sixes to sleep at the taxi garage, mindful of its portentous number, and headed for the commune.

At home I excitedly described to my two best friends what had occurred, sharing my big dilemma about his offering the Big O as part of the deal. These were independent, smart women who, like me, had been involved in women’s groups and marched for female equality through the streets of downtown Denver. I expected them to dismiss this encounter as demeaning and to call the guy a sexist pig.

“Call girls can make a lot of money. Ask him if he has some friends. Maybe you can set us all up,” said Lora, who owned a business in Boulder importing and selling African jewelry. She’d cornered the market on beads in Boulder, and during the early 70s that was a very big market.

“What’s wrong with it?” asked Eileen, who was studying to be a nurse. “Why not accept his offer? You’ve slept with guys you didn’t really like that much, and you didn’t even get any money out of it. At least you’re attracted to this guy. He’s smart, rich, and he’s offering you something in return.”

This argument got right to the heart of “feminist burnout,” that is, my exhaustion with the practice of being self-supporting (but lonely) and going out with men who expected me to make dinner for them and pay my own way (and sometimes theirs), when I was living hand to mouth. Then they wanted sex, while they did very little for me in return. From this perspective, having someone offer me compensation and put me up in a fancy hotel was appealing.

As I removed my Birkenstocks to put on fresh clothing for the tryst, I looked down at my socks. Seeing that they had holes in the toes, I got a sinking feeling of inadequacy. I suddenly felt removed from the tycoon’s standard of living. His offer had demeaned me. It objectified me, so that even if I fantasized that he had a real interest, as seen in his attempt to relate to me, I felt that to him I was that anonymous female cabbie. I called him and said no.

“Well that’s too bad. It would have been nice. But Liz, you’ve got to stop driving a cab. You’re wasting your life,” he said.

Surprisingly, this comment, coming from someone who had just propositioned me and whose values I neither respected nor aspired to, resonated with me more than I would have expected. Perhaps his attractiveness and material success made it impossible to simply dismiss him. His statement planted in me a question that persisted long after the incident: What was I going to do next? Maybe, after all, he did see something in me, something that I didn’t even see in myself –yet. Years later, happily married with three sons and teaching neuroanatomy at a medical school in Manhattan, I still wonder if I should have accepted that proposition. The irony is I would have slept with him – if only he hadn’t offered to pay.