We're working longer, earning less, and closer to poverty. The recovery has only lifted the few 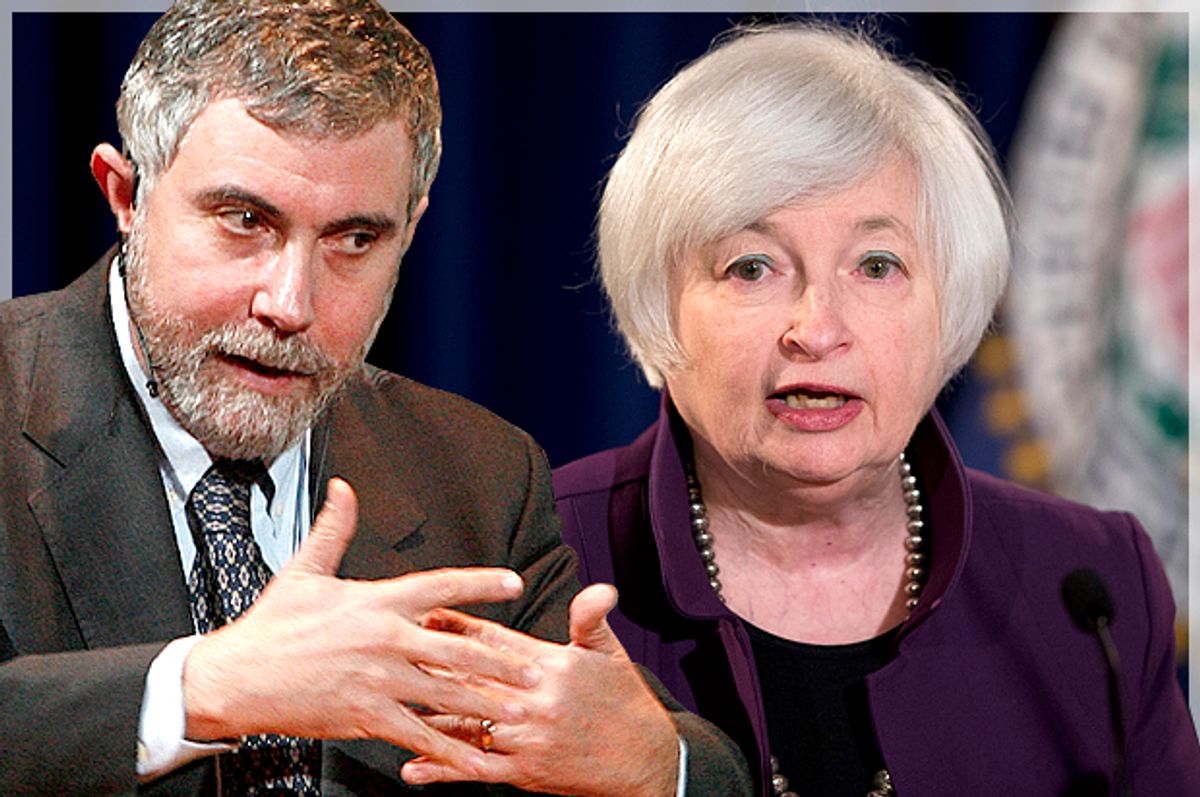 Earlier this month when Fed chair Janet Yellen offered her rationale for raising interest rates, it was sadly reminiscent of President George W. Bush’s infamous “Mission Accomplished” speech, given on the USS Abraham Lincoln when he declared that major combat operations in Iraq were over in 2003.

Yellen spoke from her well-feathered perch about the “considerable progress that has been made restoring jobs, raising incomes, and easing the economic hardship of millions of Americans.” A few days later Congress passed a $1.1 trillion spending bill and $700 billion in tax breaks before they went on their holiday. The president signed off on it all and headed off for his spectacular vacation to Hawaii.

Just what country are these happy holiday revelers living in? Even the Hallmark Channel in 2015 has more social realism than the happy talk generated from the Beltway.

Down here at the pedestrian level, between 2010 and 2014 poverty increased in one third of America’s 3,000 counties, when compared to the 2005 to 2009 period, according to the U.S. Census’s American Community Survey. In fact, the “recovery,” that pastel-colored unicorn, was only seen in the 4 percent of the nation’s counties where poverty actually declined. The rest remained stagnant.

Looking at a graphic representation of the troubling trend, a wide swath of the Pacific Northwest and most all of California, down on through the Southwest, saw this rise in poverty. On the East Coast, the New England states and those in the mid-Atlantic region were equally hard hit, and the “new” South did not escape unscathed.

It should come as no surprise. Millions of Americans lost their homes, and with them the foundation of their household wealth. During the “recovery,” census data documents that the median U.S. household income has actually declined for three years in a row and remains below its peak in 1999.

The labor force participation rate, the percentage of Americans in a job or looking for one, remains historically low, at less than 63 percent, which means that 93 million able-bodied Americans are not working. A big chunk of the nation is missing in action.

Last year, the National Employment Law Project used Bureau of Labor statistics to analyze just what kinds of jobs had been created in the “recovery” following the Great Recession. What they found was what every American looking for work already knows: The jobs that have been created are mainly in the lowest-paying sector of the economy.

In the NELP’s report “The Low Wage Recovery: Industry Employment and Wages Four Years Into the Recovery,” researchers found that there were now 2.3 million more of the lowest-paying jobs, 700,000 fewer middle-income positions and more than a half million fewer higher-paying jobs.

And while Yellen and her colleagues, with their Inspector Clouseau magnifying glass, are unable to find inflation, there is plenty of evidence of deflation of the wages Americans are earning. NELP found this past Labor Day that wages in the 800 lowest-paying occupations they surveyed had actually declined by 5.7 percent from 2009 to 2014. Mid-level wage-paying positions saw a 2.6 decline in the real median wage while the best-paying jobs saw a 3 percent slide.

We are settling into a new feudalism where income disparity and wealth inequality are actually accelerating, and hardwired into the economy. As more Americans adjust to their diminished economic standing, they are paying more and more of their shrinking income for higher rents.

Historically, residential rental costs were deemed as affordable if they were below or at 30 percent of a household's monthly income. According to a comprehensive Harvard University study, in 1960 only one in four renters paid more than that 30 percent threshold for housing. Today, half of all renters are defined as cost burdened. From 2007 through 2011 the number of households  "severely burdened," in that their rent claimed 50 percent of their income, spiked from 2.5 million to 11.3 million households.

While many Americans struggle to find safe and affordable housing, the U.S. Department of Housing and Urban Development reports, post-foreclosure meltdown, there are 2.5 million vacant homes in the hardest-hit 25 American cities. These homes, and millions more in the rest of the country, are rotting in place, pulling down the property values of the folks still trying to hold on to the life they knew before the great betrayal of America by Wall Street and their Beltway collaborators.

Close to 47 million people live in poverty and close to 16 million of them, or more than one in five, are children. In their book “$2.00 a Day: Living on Almost Nothing in America,” authors Luke Shaefer and Katherine Edin document that 1.5 million households in the U.S. live in extreme poverty, more than double the number that did in 1996.

Data published by the National Center for Homelessness and Poverty shows that the number of poor families that have doubled up with relatives or friends is approaching 8 million, up by 67 percent since 2007. Over the same period the number of poor households where more than 50 percent of their monthly income goes to rent is approaching several million, up 25 percent since 2007.

The only way that the phony corporate media narrative about the “recovery” works is if its boosters talk about aggregate national numbers. Once you drill down and have to deal with the actual conditions on the ground in a specific place, it quickly becomes apparent just how much of the nation has slipped into the quiet despair that comes with advancing decrepitude.

Take Ohio, a swing state that no successful Republican presidential candidate has won without. According to the latest federal U.S. Census data, 52 of the state’s 88 counties saw poverty go up over the last five years, with only one county reporting a decline in poverty over the same period. Incomes went down in 54 counties. Almost half the Buckeye State’s counties saw the percentage of home ownership decline.

“Our wages used to be 8.5 percent higher than the nation in the 1970s,” says Amy Hanauer with Policy Matters Ohio. “Now it's 5 percent below the national median average wage and the racial wage gap is huge. It is so depressing. We lost several decades of social and economic progress.”

Jim Rokakis, the former county treasurer of Ohio’s Cuyuhoga County, is now a vice president with the Western Reserve Land Conservancy and director of the Thriving Communities Institute. Rokakis saw the oncoming foreclosure meltdown years before it exploded and now is helping hard-hit communities set up land banks that can demolish derelict structures, save what can be saved, and help cities turn the page on this disastrous chapter. “So far 27 have been set up in Ohio and 15 more are in the queue,” says Rokakis.

Rokakis says the scale of destruction done to much of America’s cities is on a warlike scale, with block after block scarred by abandoned homes whose deterioration poses a clear and present public safety danger to the folks left behind, whose home values continue to decline. “These are the dead bodies that are out there and when you leave dead bodies you create a lot of disease,” says Rokakis.

Last year, the Pew Research Center documented that post-Great Recession America’s wealth inequality had widened significantly along racial lines. Black and Hispanic households continued to fall further behind white households, who saw their median net worth go from $138,600 in 2010 to $141,900 by 2013. Over the same period black average median household wealth took almost a 34 percent decline, going from $16,600 in 2010 down to $11,000 in 2013. For Hispanics the decline was not as steep, going from $16,000 to $13,700.

By 2013, white household wealth was 13 times that of the median net worth of black households, up significantly from eight times in 2010. Pew used data from the Federal Reserve Survey of Consumer Finances.

Back in 1968, Dr. Ralph Albernathy led a poverty mule train to Resurrection City, an impromptu encampment in our nation’s capital organized to bring national focus to the plight of the nation’s poor. Back then an American still had a national conscience that could be pricked with some effect, combined with the election of Presidents John Kennedy and Lyndon Johnson. Consider that from 1959 to 1968 the ranks of those living in poverty had dropped from close to 40 million to 25 million.

Today, more than 45 million Americans are on food stamps, which is equivalent to the entire population of Jordan, Hong Kong, Israel, Sweden and Hungary combined. Earlier this year Bankrate.com, a personal finance website, released a national survey that indicated 62 percent of American households had no emergency savings and were living from paycheck to paycheck. In a nation where keeping up with the Joneses is hard-wired in our DNA, we often choose to remain isolated about the week-to-week struggle so many of us are in.

Back in 2012 in their seminal book "The Rich and the Rest of Us: A Poverty Manifesto," authors Tavis Smiley and Cornel West captured the essence of our national political discourse with an accuracy that endures. “Beyond sound bite competition, these candidates for high office, protected with gilded lives of wealth and privilege, seem to know nothing about poverty or the poor. They claim to be concerned about the middle class, but they must have not gotten the memo, the new poor are the former middle class.”