The omnivore's contradiction: That free-range, organic meat was still an animal killed for your dinner 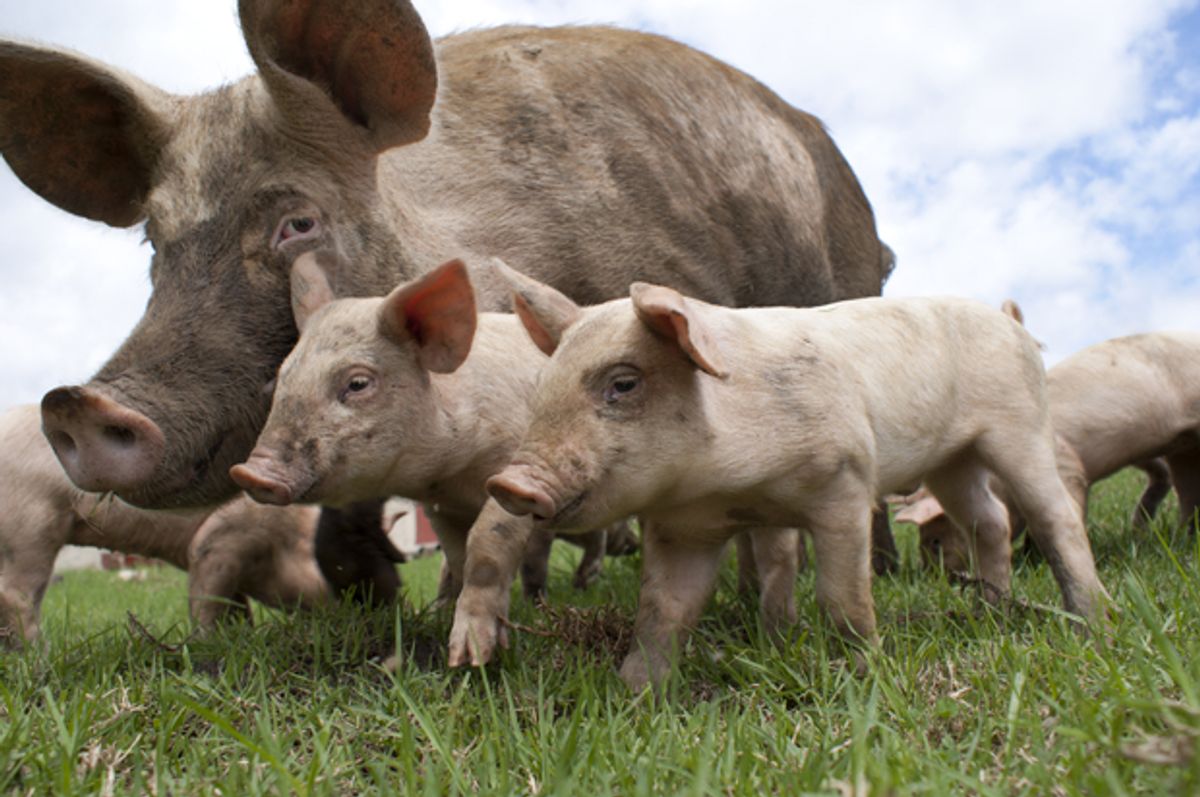 From "The Modern Savage: Our Unthinking Decision to Eat Animals"

The primary problem with condemning factory farming while continuing to eat animals from nonindustrial sources comes down to this basic point: doing so demands selective moral consideration. This is another way of saying that eating “humanely” raised animals requires a double standard, with welfare standards applied differently to factory farms and small farms. Opponents of factory farming who support nonindustrial alternatives because they care about animals’ welfare thus find themselves trapped in what seems to be a logical inconsistency. Let’s bore into that inconsistency.

The rationale applied to animals in factory farms goes something like this: animals have feelings that are worthy of our moral consideration; animals are not objects; their welfare matters; therefore they do not deserve the abusive confines and unavoidable suffering of factory farms. These beliefs assume that animals have emotional lives, experience suffering as a result of being raised inhumanely, and thus have moral relevance. This recognition means that animals’ capacity to suffer, while perhaps different in degree from our own, is nonetheless meaningful and familiar enough for humans to demand that animals be spared the abuses endemic to industrial animal agriculture. To reiterate a key point: that we believe these animals should not suffer in confinement affirms a basic respect for their existence as sentient beings. They can suffer, and we should avoid inflicting suffering whenever possible. The logic on this point seems tight.

But when we apply this moral consideration to nonindustrial farms, things fall apart. The moral standard applied to nonindustrial farms should be the same as that applied to factory farms. The core premises should still pertain: animals have feelings; they are not objects; their welfare matters; they deserve to live lives conducive to their general interests. These premises are (we will assume for now) often adequately met on small, sustainable, “humane” animal farms. Nevertheless, we must not forget that even on small, sustainable, humane farms, animals are raised for the ultimate purpose of being killed and turned into commodities. Matters therefore undergo an abrupt change when we extend moral consideration beyond the question of how animals are raised to the much more troubling question of their death. At this crucial crossroad in a farm animal’s life—the human choice to slaughter the animal—the moral consideration we applied to factory-farmed animals suddenly— violently—disappears. And that’s a problem.

Michael Pollan, who we’ve seen clearly affirm the inherent worth of farm animals, has dismissed the moment of an animal’s death as essentially insignificant. He has said, “what’s wrong with animal agriculture—with eating animals—is the practice, not the principle.” Death, in other words, is only one day. Give animals a good life, take them down when they least expect it, and these creatures will never know what hit them. We owe animals, not to mention humans, a better explanation than “death is only one day.” Death is serious business that, for farm animals, denies them a future they’d otherwise have had. It also poses a major problem for the supporters of nonindustrial alternatives. Recall that in our application of moral consideration to factory farming, the animal’s death is never mentioned. It doesn’t have to be. The entire cycle of life on a factory farm is so abhorrent as to be dismissed outright as morally corrosive at every turn. Life is horrible for the animal; death is horrible for the animal; factory farming is horrible for the animal; the whole thing is horrible, horrible, and horrible. No more questions, no reason to draw a distinction between life and death, no reason to discern between how an animal is raised and why an animal is killed. The question of death is rendered moot and thus not considered when we condemn factory farms.

Now recall the primary reason concerned consumers believe farm animals should be raised in nonindustrial settings. They want animals removed from factory farms (at least in part) because they believe correctly that animals experience undue suffering on factory farms. Their suffering, as these critics see it, is significant. A pasture-based agricultural system is favored as an alternative to restore to animals a sense of dignity and the opportunity to live lives more or less free of human-imposed restrictions that cause suffering. I’m going to aggressively question this assumption in upcoming chapters, but for now let’s assume that our desire for farm animals to be treated well is satisfactorily fulfilled on a humanely managed nonindustrial farm. Let’s assume that animals have space to roam, can choose what to eat, and may even have sex under the warm sun on a breezy afternoon. They can, in essence, enjoy a more natural and pleasurable quality of life. This substantial reduction of suffering is fully consistent with our stated moral concern for farm animals, which led us to condemn factory farms and support their nonindustrial alternatives in the first place. The moral benefit of a nonindustrial farm is that it grants to animals the pleasure-inducing freedoms denied to them by factory farms. We believe they have a basic right to these pleasurable freedoms due to their sentience. So we grant them that right and feel good about doing so.

But then there’s that moment that every animal producer and consumer must confront: slaughter. Recall that if our moral consideration for animals is genuine, we must apply that consideration to the entire cycle of the supposedly humane alternative. And that cycle includes an animal’s early and intentional death. This inclusion reveals something troubling, if generally unrecognized in our common discourse on the tenets of responsible agriculture. It reveals that, on nonindustrial farms—just as in factory farms— farmers kill and commodify the animals they are raising. Intentional death is the essential feature of both systems. This claim is neither melodrama nor overstatement. It is a fact. Without systematic animal death, you have no animal farm—factory or otherwise, big or small, conventional or organic. It might take longer to get an animal to slaughter weight in the alternative arrangement, and that animal might have a lot more fun having sex and eating real food, but that animal’s foundational and functional role in the system remains exactly the same as in the factory farm: to get fat fast, die relatively young, and feed people food they do not need to eat.

Our stated moral consideration for animals—and thus the moral argument for small-scale farms—crumbles on this point. To end a sentient animal’s life is to suddenly objectify the animal after previously treating her as a subject worthy of moral consideration. That’s inconsistent. That this decision is made well before the animal reaches even the prime of her life not only makes the “humane” alternative similar in its most essential aspect to factory farming, but is entirely out of sync with the moral consideration we’ve granted to animals in the first place. That the death is for the production of a commodity for personal profit cheapens the reality even more so.

We say we care about animals. We say it all the time. We say we care about them enough to urge a wholesale restructuring of the food system to promote their welfare as nonobjectified animals. We say it, moreover, because we mean it, because we’re decent, because we have compassion. However, in a whiplash-inducing shift in moral logic, not to mention behavior, we suddenly ignore our concern and decide to end our consideration of these animals’ emotional lives by killing them. No matter how you slice it, killing a healthy animal for food we do not need, no matter how the animal was raised, is never consistent with that animal’s welfare. In the end, it mocks our original assertion of their moral worth.

This death, no matter how “humane,” no matter how respectfully administered, no matter how thickly clothed in feel-good rationalizations (“it had a good life”), essentially negates the moral consideration that inspired us to condemn factory farms in the first place. You can’t claim to truly care about an animal, alter her environment to demonstrate your care for that animal, and then, when the animal is nowhere near even the middle of her natural life, kill the animal for no vital reason. Doing so is morally and logically inconsistent. It’s worse than ambiguous. It’s wrong. It is, alas, the omnivore’s contradiction.

JAMES MCWILLIAMS is a writer and historian living in Austin, Texas. He is the author of five previous books on food, animals, and agriculture, including Just Food and A Revolution in Eating. His work has appeared in The New York Times, Harper's Slate, The Atlantic, and a wide variety of other publications.