Who thought this was a good idea? 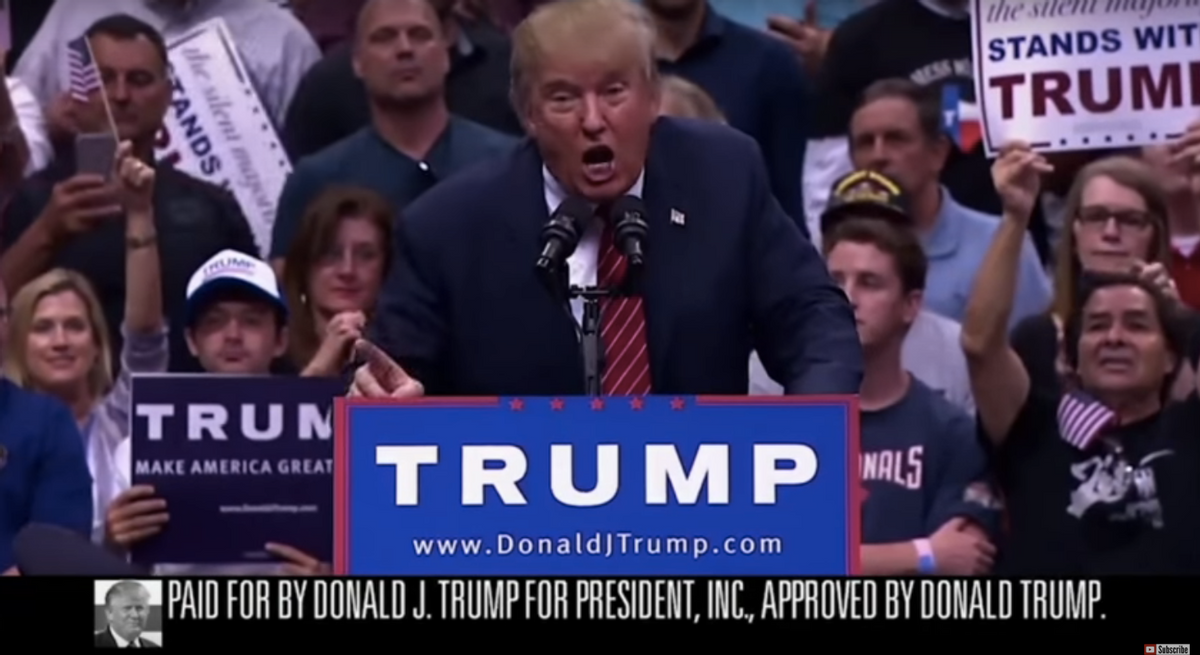 Hooray, the first Donald Trump TV ad is here! And in no way does it look like something slapped together by an overeager freshman in a Politics and Media Studies class.

Given the excitement in the national press, you’d have thought the real-estate mogul had dropped "Birth of a Nation" on us. Given the ongoing nativism and racism of the Trump campaign, that’s not too far from the truth. Let’s take a look at Trump’s big semester-ending project and evaluate its merits.

We start with a shot of Trump at a lectern giving a speech while his voiceover tells us he approves this message. It’s a standard disclaimer with a shot of the candidate looking either presidential or like he’s giving the keynote address at a convention of realtors. Either way, perfectly fine.

Then there is a dirtied-up video still of President Obama and Hillary Clinton at a lectern in front of what looks like the White House, followed by headshots of San Bernardino killers Syed Farook and Tashfeen Malik over a background of police cars and video of paramedics wheeling someone on a stretcher towards an ambulance. The narrator, who has one of those deep and sonorous voices meant to convey unearned gravitas, says: “The politicians can pretend it’s something else, but Donald Trump calls it radical Islamic terrorism.”

Good use of the current president and the likely Democratic nominee, who served as his Secretary of State, as stand-ins for all politicians. The same goes for the juxtaposition of Obama and Clinton with scenes of frightful terror and scary, hijab-wearing brown-skinned foreigners -- themselves serving as stand-ins for other hijab-wearing, brown-skinned foreigners who might be plotting at this moment to kill you and your loved ones in your bed -- all while the narrator repeats a talking point that all the GOP candidates seem to think conveys strength and bravery. We could easily debate its meaninglessness or the idea that the enemy will cower in fear if only the president starts using the proper nomenclature, but that’s not the point of the ad.

So far, a solid if unspectacular effort.

Next we have a black-and-white shot of a crowd of (presumably) Americans in some generic outdoor space. Just normal people in business attire going about their day – working, eating, caring for their innocent children. This is followed by a still of masked men with an ISIS flag. The narrator tells us that Trump is “calling for a temporary shutdown of Muslims entering the United States until we can figure out what’s going on.”

Like the previous sequence, this is a good if unoriginal juxtaposition of imagery meant to convey danger to Americans, underscored by a talking point that sounds reasonable despite actually being meaningless and nonspecific about the action it would entail. I would take points off for the blatant nativism and xenophobia, but that seems unfair considering the candidate’s appeal to nativists and xenophobes has managed to propel him to the top of the GOP ranks.

Next we have a shot of what appears to be an American warship firing its guns, followed by a shot of a target blowing up, as seen from a drone or maybe a bomber jet, and complete with explosion sound effects. The narrator tells us that Trump “will quickly cut the head off ISIS and take their oil,” which is another of his bombastic talking points that elides the fact that such action would require sending tens of thousands of American troops back into the Middle East. But again, it’s a campaign ad, not reality.

Then we have a still of what appears to be more brown-skinned folks crowding a wall in a generic wilderness, followed by black-and-white security-camera footage of people dashing across an open space, presumably Mexicans and other nationalities sprinting across our southern border. The footage has been shot from far enough away that the people look like ants scurrying around their colony, or maybe it’s an outtake from an adaptation of "Day of the Locusts." While these shots roll across the screen, the narrator tells us that Trump “will stop illegal immigration by building a wall on our southern border that Mexico will pay for.”

Finally the ad ends with Trump at his lectern again, telling an audience at a rally, “We will make America great again.” Excellent use of the candidate repeating his campaign slogan.

All of this is backed by generic piano music meant to sound spooky that the ad’s creator might have pulled from a CD he found in the back of the audio production company’s storage closet.

Overall the ad is basically just some of Trump’s campaign rhetoric read by a narrator who is supposed to sound dramatic and borderline sinister, but mostly just sounds like Don Pardo with a respiratory infection. Still, it hits the g-spot of the Trump supporter who cares less about the intellectual bankruptcy of the rhetoric and more about the attitude, the gestalt of Trump and his promises. He will make America great again by blowing up lots of shit and keeping the mongrel hordes away from you and your children. Just don’t ask him how, or what it might cost, in both dollar terms and lives and moral standing.

The ad is not exactly Leni Riefenstahl, but it doesn’t have to be to get the point across. A solid if unoriginal effort. I’m still in a generous and expansive mood from the holidays, so I’ll give our unnamed freshman a B -- and then go drink in my faculty office.