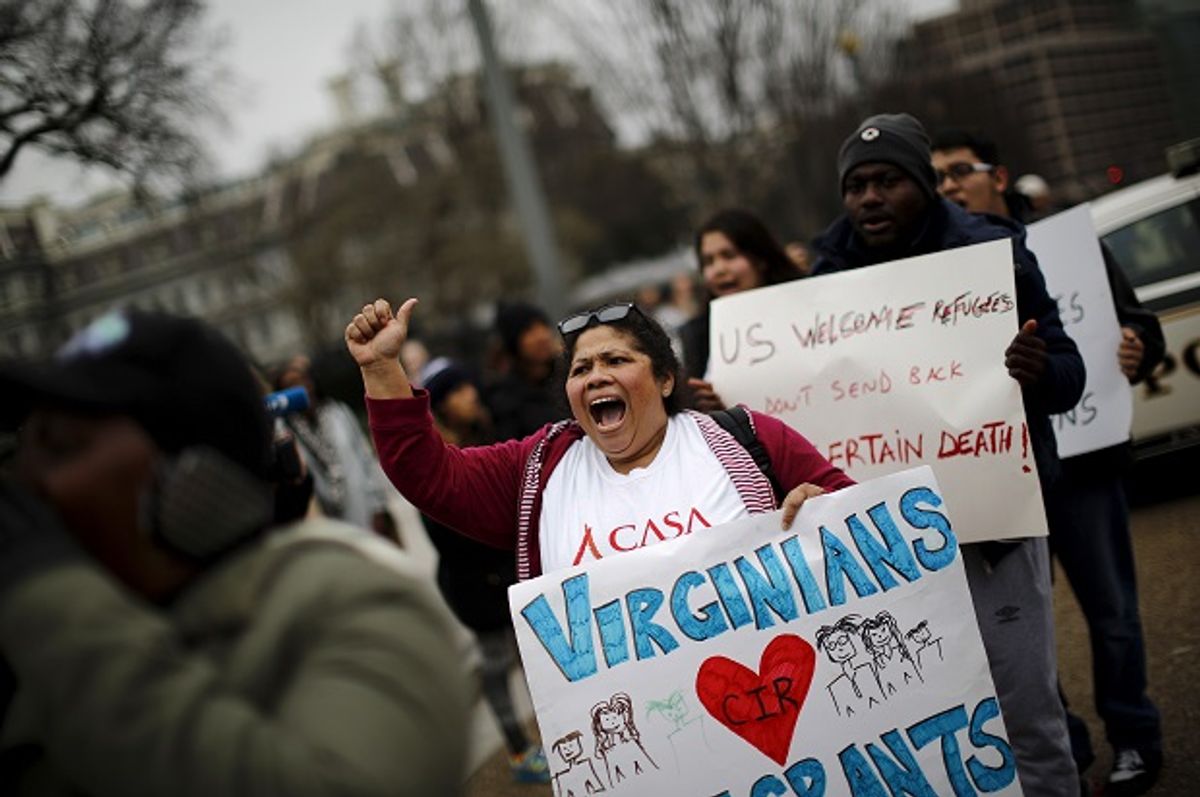 A woman told The Los Angeles Times that ICE agents showed up at her home in an unmarked car, entered her house, walked through every room, and woke up her children. "They were shaking from fear," she recalled.

Customs agents were looking for the woman's niece, a refugee who sought asylum in the U.S. with her son after fleeing Honduras, where gangs killed her brother. The court ordered the refugee woman to wear an ankle monitor, so it can track her.

The Los Angeles Times reported that the Honduran refugee and her son were detained, although ICE does not disclose information about its raids. The mother is one of many thousands of Central Americans seeking refuge from violence in countries like Honduras, Guatemala, El Salvador and Belize, where the U.S.-backed drug war has left countless people dead or missing.

Immigration legal experts and advocates have condemned the Obama administration for cracking down on and deporting refugees. Gregory Chen, director of advocacy for the American Immigration Lawyers Association, stressed the "administration has never acknowledged the truth: that these families are refugees seeking asylum who should be given humanitarian protection rather than being detained or rounded up. When other countries are welcoming far more refugees, the U.S. should be ashamed for using jails and even contemplating large-scale deportation tactics."

Marielena Hincapie, executive director of the National Immigration Law Center in Los Angeles, added, "It is time that the administration acknowledge once and for all that these mothers and children are refugees just like Syrians."

The Department of Homeland Security insists that it is simply following U.S. law.

"As I have said repeatedly, our borders are not open to illegal migration; if you come here illegally, we will send you back consistent with our laws and values," Homeland Security Secretary Jeh Johnson said.

Migrants' rights groups have condemned the raids and deportations. On Dec. 30, activists gathered in Washington, D.C. to protest ICE, the Democratic Party, the DHS, and the Obama administration.

The American Civil Liberties Union slammed the government for its policies. "These raids are a scare tactic to deter other families fleeing violence in Central America from coming to the United States," said Cecillia Wang, director of the ACLU's Immigrants' Rights Project. "Secretary Johnson has himself admitted the raids are designed to deport as many as possible, as quickly as possible. The administration is doubling down on a system that is rigged against these families."

"Many of these mothers and children had no lawyers because they could not afford them," Wang added. "Without counsel, traumatized refugees don't understand what is happening in court and cannot get their legitimate asylum claims heard."

Responding to the weekend detentions, the Fair Immigration Reform Movement (FIRM) said it is "appalled, outraged, and heartbroken that President Obama has put in place his administration's plan to raid the homes of Central American immigrants targeted for deportation."

"If these families are deported —and most of them would be women and children — they would be returned to places they fled to escape being killed, raped, or tortured," Matos added.

FIRM says it received confirmed reports that, on Dec. 2, women and children were taken from their homes in Georgia and Maryland and placed in detention centers.

"These families came to the United States seeking refuge and better lives, like countless millions of other immigrants. That is what has made America the great country that it is. Rounding up these families to deport them back to a region marked by extreme violence is inhumane," Matos said.

"FIRM will do everything in its power to stop this reported plan from being implemented. We cannot and we will not remain silent when our families are living in fear of being separated and sent back to face possible harm, including death," Matos explained. "President Obama's, DHS Secretary Jeh Johnson's, and ICE Director Sarah Saldana's betrayal of the Latino and immigrant communities is one that will mark his legacy and that of this administration."

Some legal scholars have questioned whether the U.S. government is violating international humanitarian law by imprisoning and deporting refugees."

Barbara Hines, former director of the Immigration Clinic at the University of Texas Law School, told Democracy Now "the Obama administration took the most extreme position in regards to these families, from a panoply of options of what to do with asylum seekers."

Hundreds of migrants who fled violence at home, only to find themselves in in privatized, for-profit detention centers in the U.S., have gone on hunger strike in protest of ghastly conditions and indefinite detention.

More removals — migration orders formerly referred to simply as deportations — have been carried out under Obama than under any other presidential administration.