The Bundys should not be belittled or dismissed. Violent white men with guns are as American as apple pie 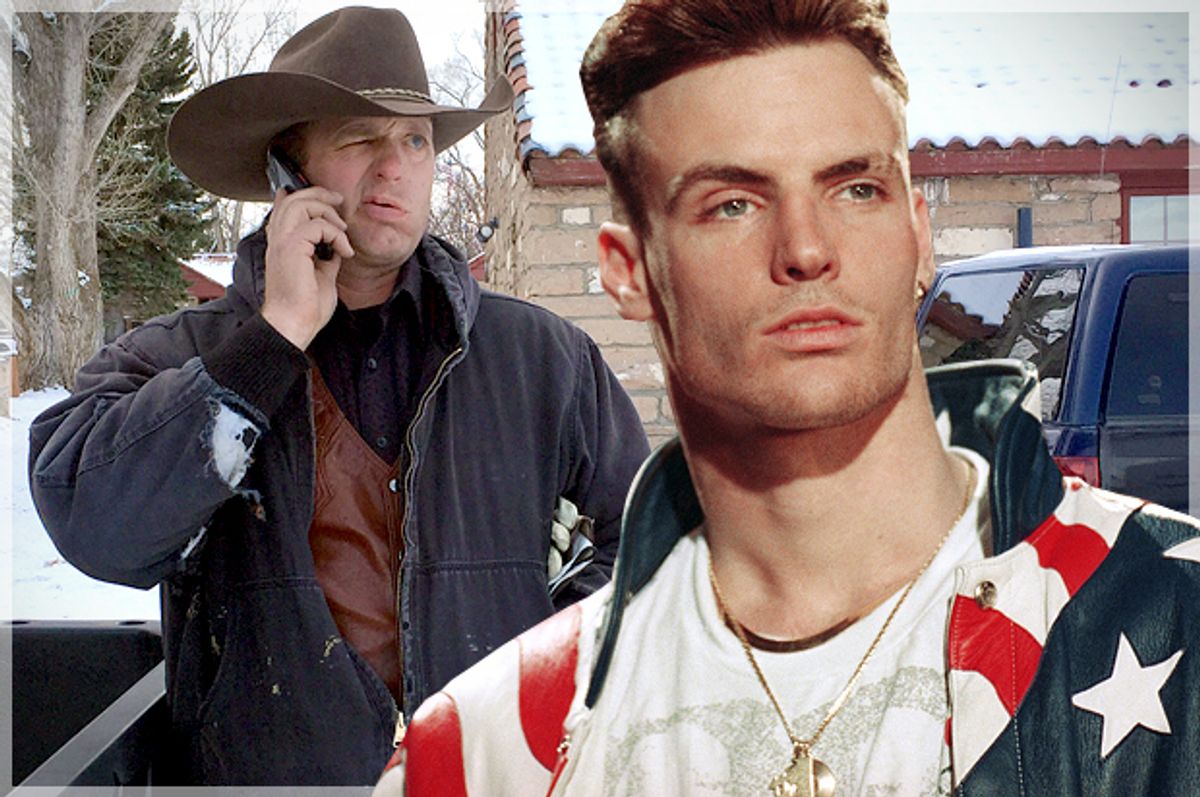 Yes, I laughed at the names “Y’all Qaeda” and “Vanilla ISIS” to describe the armed terrorists--and yes, I do insist on using that word--who’ve taken over a federal building in Oregon.

And like many other Twitter users it took me just a few hours to regret laughing at the name and start saying we shouldn’t use it.

That’s not mainly because of the “classist implications” of “Y’all Qaeda” and “redneck” humor, though that’s part of it -- though I agree that lumping in all poor or working-class white people with violent nativists and racists is unhelpful, especially when it serves as a way to pretend nativism and racism are somehow not a problem among our wealthy coastal elites. (It doesn’t help that it’s a way for wealthy landowners like Cliven Bundy and Dwight Hammond -- and, for that matter, George W. Bush and Donald Trump -- to pretend they’re oppressed underdogs by putting on a cowboy hat and pointing to New York journalists mocking them.)

It’s also not mainly because I sympathize with the argument from apologists for Ammon and Ryan Bundy’s militia that they haven’t killed anyone yet and therefore comparisons to murderous terrorist groups are unfair. The militia has seized property that doesn’t belong to them using the threat of force. As has been repeatedly pointed out, if brown men who “looked Muslim” as opposed to white men who “looked patriotic” did that, they’d already be dead.

Moreover, their movement isn’t new. Their complaints about “states’ rights” and the 10th Amendment go back a long way, and if you go back only one generation they’re preaching the same dogma as the similar 1990s militia movement that led to the second-deadliest terror attack on U.S. soil in history.

And, you see, that’s the reason I don’t like naming the Bundys’ little band of insurgent extremists after Al-Qaeda or ISIS. Because it plays into the idea that violent terrorism is somehow a Muslim or Middle Eastern invention, that violence is a characteristic of brown people in the Middle East and somehow out-of-place when we see it here.

It isn’t. Violent, extremist terrorism--threatening people with guns and bombs to get what you want rather than submitting to the rule of law--is a fine American tradition, old as the United States of America itself.

Moreover, we have written into our national mythology that it’s the fundamental right of Americans to get what they believe is their due by violence. We’ve enshrined the Second Amendment as giving the Constitution the self-contradictory purpose of empowering any group of angry citizens to overthrow the government by force if they don’t like it, leading to random angry bands of armed men deciding to call themselves “militias” with no regard for how “well-regulated” they might be.

Historically, that right has been restricted to people whose existence as Americans was seen as legitimate, i.e. white people, and exercised against people whose existence was not, i.e. everyone else. The American definition of “freedom” has meant taking land by force from people already living there if they happened to be “savages.” It’s meant forcing other people to work for you for free if they happen to be enslaved by virtue of their race. The ugly history of the real “well-regulated militias” of our history is that they weren’t generally tasked with fighting foreign invaders, which the United States has rarely had; they were there to kill Native Americans and runaway slaves.

And the history of our country’s attitude toward violence is that we like it when it’s state-sanctioned against people we see as lesser than ourselves, but when the state takes away that sanction we’re quite willing to continue it outside the law. When the federal government signed a treaty with Native American nations, individual citizens felt free to violate those treaties and take land anyway--backed with their own weapons and the knowledge the government would look the other way. When the Civil War ended and the federal government formally abolished slavery, the former slave patrols simply rebranded as the Ku Klux Klan and enforced de facto enslaved status for many black Americans in the South, with the federal government’s eventual tacit approval.

When the Bundy brothers say they’re acting in the tradition of “American patriots,” they’re not wrong. Both their cause and their method of protest are far pettier and lower-stakes than their historical antecedents, but they’re arguably acting in the tradition of the Whiskey Rebellion, Shays’ Rebellion, even the Revolution itself, which all, however more meritorious they might be than the Hammonds’ grievance or Cliven Bundy’s, were all arguments that paying your debts to the government is optional if you happen to be an angry white man with a gun.

They’re treading in the footsteps of time and time again Americans illegally seized land at gunpoint and then expected the government to back them up retroactively, because of the American founding myth being based on the idea that white men with a gun have the right to take what they want, the idea we call “Manifest Destiny.” Andrew Jackson took the whole state of Florida at gunpoint with no force of law behind him, and got away with it. We romanticize the “taming” of the “Wild West,” which involved a whole lot of nebulously-legal taking land away from people at gunpoint. We added the entire American Southwest to our territory after an incredibly bloody war that we fought with only the thinnest legal and moral justification.

Is it really any wonder, then, that America seems to have a recurring cultural problem with white men who feel they’ve been denied something they’re owed getting their hands on guns and seeking to get back at the world through violence?

America keeps on producing clubs for white men with guns who are angry that America doesn’t look the way they think America should look, and believe that they have the right to oppose everyone else’s opinion on the matter with force. It’s far more of an American tradition than apple pie.

Calling American terror groups on American soil snarky nicknames after the terrorist groups our news agencies prefer to pay attention to--the appropriately foreign ones that don’t remind us of any of our own relatives, so we can safely demonize them--is just another way of distancing ourselves, ducking responsibility.

If we were honest we’d acknowledge that the stuff we label “terrorism” and “ethnic cleansing” isn’t just caused by what we do--ISIS forming in the wake of the invasion of Iraq, Al-Qaeda after our intervention in Afghanistan--but that this stuff is what we do.

The urge to go out on your own to impose your will on the world by gunpoint isn’t some disease of “failed states” in the Third World or of “Islamic extremism.” It’s quite literally the American way. Until we can be honest with ourselves about that, the violence isn’t going to stop.