They'd be killed if they were black: The racial double standard at the heart of the new Bundy family standoff

Armed white men seize a federal building. The government stands down carefully. But a 12-year-old with a toy gun? 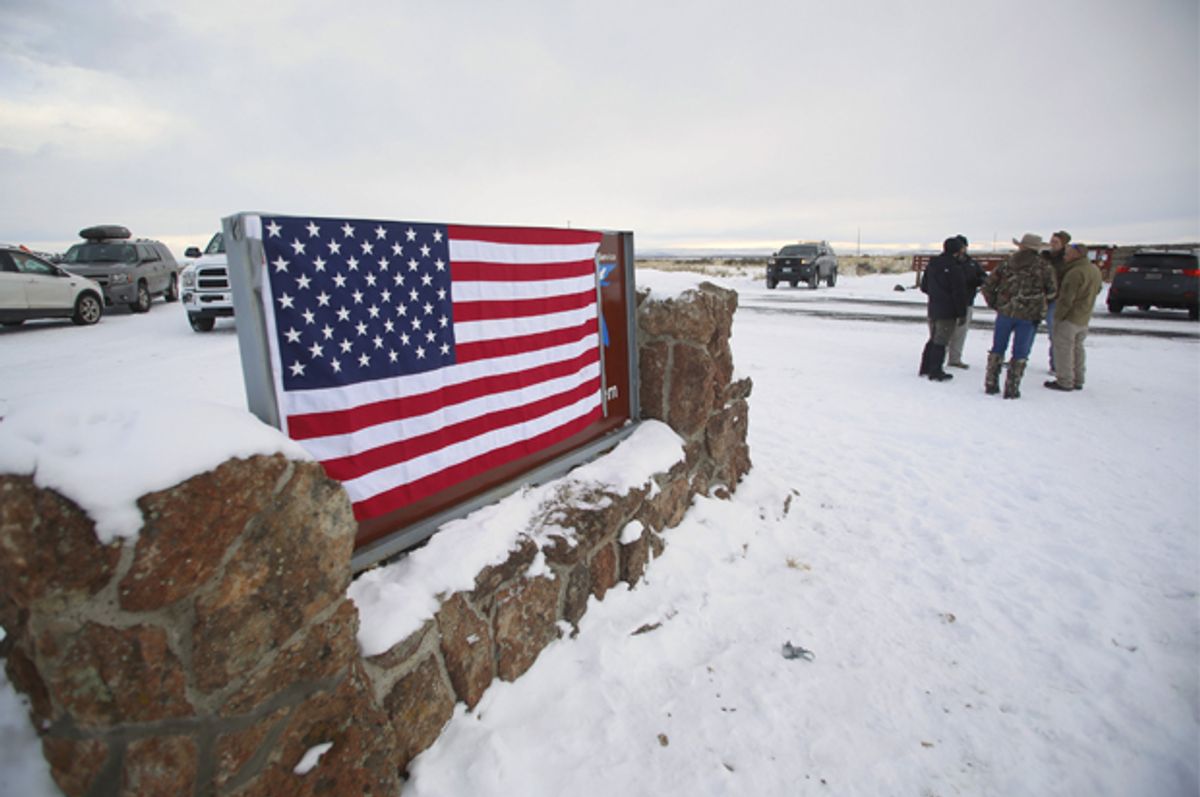 At least 150 armed white men have seized control of a federal building outside of Burns, Oregon. They are led by a cadre which includes Ammon and Ryan Bundy. They are the sons of Cliven Bundy, the rancher who led a successful armed rebellion against federal law enforcement officers in Nevada last year. Since that event, Ammon and Ryan Bundy have been traveling the United States, meeting with other white “militia” groups, and inciting violence against the federal government.

“Those who want to go take hard stand, get in your trucks and follow me!” Ammon Bundy declared to rally-goers at the conclusion of Saturday’s event, according to several people who were in attendance. Not long afterward, the group had taken over the federal wildlife preserve.

“These men came to Harney County claiming to be part of militia groups supporting local ranchers,” Ward said in a statement Sunday. “When in reality these men had alternative motives, to attempt to overthrow the county and federal government in hopes to spark a movement across the United States.”

Several of the men occupying a federal wildlife preserve in Oregon have even recorded “goodbye” videos to their relatives in anticipation of being killed in battle with the United States government. Others have threatened to use deadly force if local police or other government forces attempt to remove the protesters from the land and building they have occupied.

The actions taken by Ammon Bundy, Ryan Bundy, and their supporters in Oregon are the very definition of terrorism and armed insurrection.

It would seem that the year 2016 has begun with a strident example of unapologetic white privilege in action.

[Oregon is a perfect place for such a gesture, as it was admitted to the Union in 1859 with a constitution that explicitly banned blacks from the state. Black Americans were barred from moving to Oregon until 1926. The Ku Klux Klan and other white terrorist organizations used violence and other forms of intimidation in their (failed) efforts to prevent black Americans from settling in the area. At present, white nationalist organizations continue to claim the area as a foothold and primary base of operations.]

White privilege has many components. One of its most powerful aspects is the ability to twist reality, and by doing so, free white folks from personal responsibility (as well as group accountability) for their actions. There are many examples of this phenomenon in the United States. White men who commit mass shootings are “mentally ill” and not “terrorists.” Heavily armed white cops who kill unarmed and defenseless black people were acting “in reasonable fear of their lives.” White conservatives who gather by the dozens and hundreds and then point loaded guns at federal authorities are described by the right-wing news entertainment media as “patriots.”

And of course to be “white” is to be unmarked by “race.” Therefore, there will be little mention of the fact that these right-wing traitors are white men. Moreover, the connections between the Christian White Identity Movement will also go uncommented upon by the mainstream corporate news media.

The latter’s coverage of the events in Oregon has followed this script very closely.

The New York Times described the events in Oregon as “Armed Group Vows to Occupy Office in Oregon for ‘Years’.”

Surprisingly, Fox News, while still quite literally whitewashing their headline, came the closest to the truth with their, “Armed militia occupying Oregon government building."

It does not take an amazing act of creativity to envision how the same actions—and much less—if taken by blacks, Hispanics, Muslims, or First Nations peoples would likely be described by the American corporate news media.

If Muslims took up arms, occupied a federal building, recorded martyrdom videos, and threatened to kill police and other authorities, they would be called “terrorists."

Likewise, black Americans would be called “thugs,” “militants” or “anti-police."

The White gaze is wonderful at focusing its distorted view outward on the Other. It fails miserably in terms of introspection. As such, there will be no discussion of the “religion,” “culture” and “values” of the white men who are the Bundy brothers’ rabble when such questions are obligatory for people of color and Muslims.

The armed white insurrectionists in Oregon will couch their behavior in the rhetoric of how they are fighting “tyranny” while waving around a Constitution they likely have not fully read (armed resistance to the federal government is a violation of Article 1) . In essence, the Bundy brother’s rabble are political cosplayers: they fly Revolutionary War era Gadsden flags, brandish “freedom muskets” (also known as AR-15 assault rifles), wrap themselves in the empty Americana kitsch symbolism of cowboys and the frontier, and show their bravery by occupying an empty federal building on a remote wildlife game preserve.

[The irony is wonderful. These Constitution fetishists worship an American past they do not fully understand. An example: the United States federal government under George Washington sent 13,000 soldiers to crush the Whiskey Rebellion in 1794. The Bundy brothers’ rabble is likely not prepared for a similar outcome.]

In all, the “Oregon Insurrection” is a display of a type of aggrieved, right-wing, embattled, conspiranoid, white masculinity that incorrectly believes that freedom and democracy are predicated on gun fetishism and advancing the agenda of the National Rifle Association.

This is delusional thinking. It is no less dangerous because of that fact.

This is another step down the road that leads to the broken shell of the Murrah Building in Oklahoma City. There are respectable people in our respectable politics who have been shamefully silent on the subject, and there are respectable people in our respectable media who seem terrified of calling this what it is. You want an example of the deadening effect of "political correctness" in our politics? Watch what the people running for president have to say about this episode. Look at how it is being framed already—or ignored entirely—by the elite political media. There is a constituency for armed rebellion in this country that is larger than any of our respectable political and social institutions want to admit. It is fueled by reckless, ambitious people who engage in reckless, ambitious rhetoric.

Ultimately, the recent events in Oregon are one more reminder of how white privilege is an existential state of hypocrisy.

African-American protesters in Ferguson were met with lethal rounds from police, faced down by snipers, were bludgeoned with nightsticks, shot with rubber and wooden bullets, spied upon by drones, and shown the full range of power that is capable of being summoned by America’s hyper-militarized police forces. The protesters in Ferguson were also confronted by the National Guard—a step that the governor of Oregon has so far not taken in order to neutralize the estimated 150 armed white men who are making terrorist threats and engaging in armed insurrection in his state.

A black 12-year-old boy who was guilty of the “crime” of playing with a toy gun in an “open carry” state was summarily executed by local police.

A black man who was selling loose cigarettes on a street corner in order to help support his family was choked to death by police while he screamed “I can’t breathe."

White folks can brandish real weapons, steal public resources, engage in acts of terrorism and insurrection, and threaten to kill the police and other State authorities with little if any consequences.

Thus, the rule along the color line would seem to be as follows. The State escalates its violence against the defenseless and vulnerable if they are black or brown. In contrast, the State backs down and deescalates if the persons involved are white, right-wing and heavily armed.

This is our America.