Trump supporters and the Oregon militiamen agree: More free stuff for us, nothing for anyone else

Trump supporters and the Oregon militia have a lot in common, namely a desire to monopolize government resources 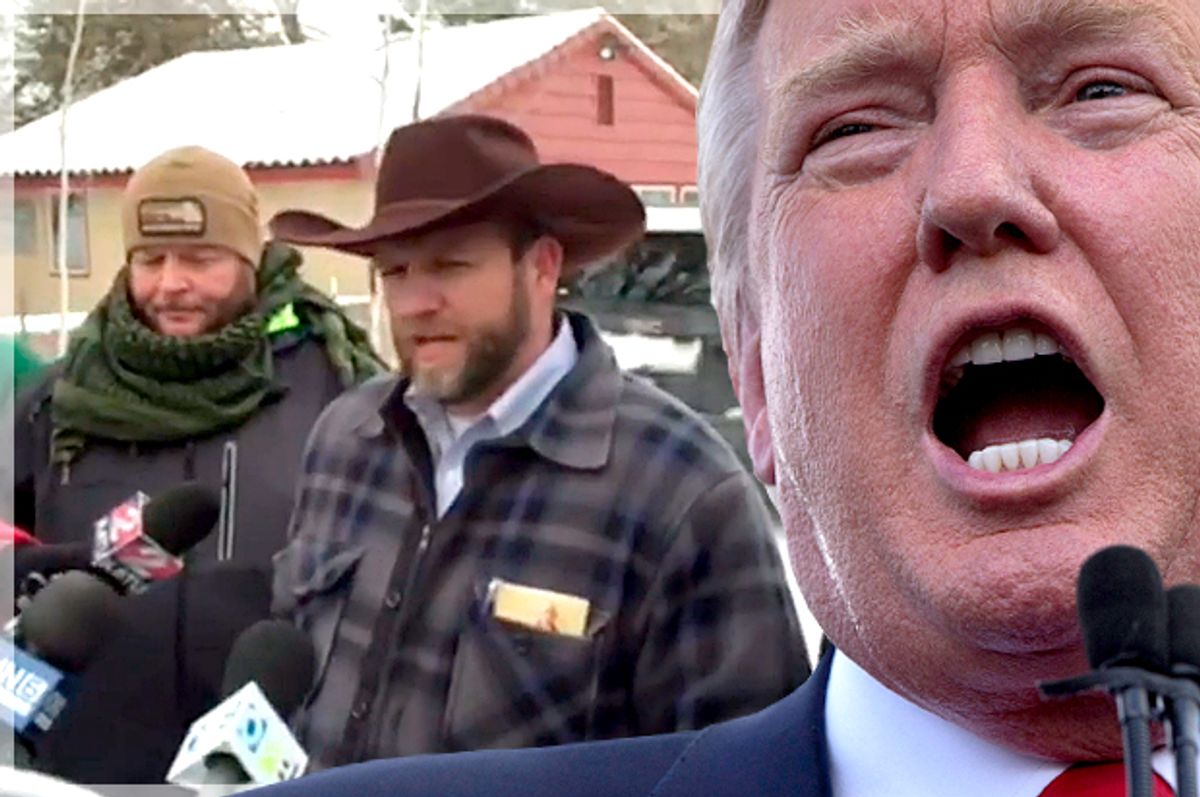 The most surprising aspect of the Oregon militia standoff between members of the notorious Bundy family and federal authorities is that something like this didn't happen sooner. During the '90s, it seemed there was always some kind of dust-up between the feds and a group of well-armed and bitter white people who refused to accept the federal government's authority: Waco, Ruby Ridge, Fort Davis. It seemed that, with the election of another Democratic president whose legitimacy is constantly questioned by paranoid right wingers, it really was just a matter of time before similar incidents happened.

But that these kinds of things seem rarer shouldn't be taken as evidence that the sentiments that inspire this kind of seditious behavior have faded since the Bill Clinton years. On the contrary, the Bundy militia members occupying a federal wildlife preserve in Burns, Oregon are motivated by the very same mix of resentments and hobby horses that are driving the Donald Trump movement. Both Trump's supporters and the Bundy agitators are moved by an unsubtly racialized sense of entitlement, a belief that federal benefits and giveaways are great when going to conservative white people but illegitimate if they go to anyone else, especially people of color.

As David Roberts at Vox recently pointed out, Trump supporters aren't motivated by some ideological opposition to the concept of government benefits. They are perfectly fine with government benefits that they accrue. What they object to is other people — especially people of color, who they stereotype as lazy and undeserving — also getting benefits. It's a kind of "ethnic chauvinism" that Roberts describes as "socialism for me, Darwinian capitalism for thee."

Despite claims to be libertarian and ideologically supportive of smaller government and lower taxes, the Republican Party has historically kowtowed to this mentality, attacking government benefits perceived as going to the "less deserving," such as food stamps or public housing subsidies, while leaving those perceived as going to elderly white people, such as Social Security or Medicare, well enough alone. But Trump, as Roberts writes, "is standing up for Us, and denouncing Them, in a clearer way than any other politician," leading to his popularity for a base that isn't interested in cutting government spending per se, so much as they are interested in increasing the giveaways to themselves while decreasing the giveaways to hated Others.

The critical thing to understand is that the same logic is what led to this Oregon situation. The leaders of this occupation — the Bundy brothers, Jon Ritzheimer, Blaine Cooper and Ryan Payne — are demanding that the government hand over a huge amount of wealth to a bunch of conservative white people, on the grounds that they want it. Ammon Bundy has a video on his own Facebook page, making it clear that a huge federal giveaway of lands to the people that live near them is what this is all about.

There's no reason to embroider this. The Bundys and their supporters want the federal government to hand over federally held lands, free of charge, to the people in the area, so they can enrich themselves off those lands without paying the taxpayers back for what they use. Some of the folks want to graze animals for free, some want access to the minerals under the ground to sell without having to buy them first, and others want to cut down trees they didn't buy and sell them at a profit. The common theme here is that the taxpayers should give them a bunch of stuff we own, because "freedom" and "constitution" and "the people" and whatever nonsense words they are flinging around to say they want free stuff.

What's frustrating is that it's not entirely unreasonable for citizens of the U.S. government to want access to federal lands, within reason. It does belong, as Bundy says, to "the people."  But the fact is they are already getting this. Ranchers in Nevada only pay the government $1.35 per cow per month to use federal lands for grazing, compared to the average $15-$18 that private land owners get.  This difference amounts to a huge federal giveaway to ranchers. But getting $13 per cow per month in free cash isn't enough for these greedy monsters. No, they want the federal government to cover the entire cost of their cattle grazing. Because "freedom" and "the constitution."

But while the Bundy family wants the taxpayers to fatten their cows up for free, so they can turn around and sell those cows at a tidy profit, they sure resent anyone else getting any benefits from the federal government. After his 2014 standoff, where Cliven Bundy demanded that the government feed his cows for free instead of for $1.35 a head, Bundy held forth on his racial views to The New York Times.

"I want to tell you one more thing I know about the Negro," he ranted. "They abort their young children, they put their young men in jail, because they never learned how to pick cotton. And I’ve often wondered, are they better off as slaves, picking cotton and having a family life and doing things, or are they better off under government subsidy?"

It doesn't get blunter than that: If white people are getting government-subsidized land in order to feed their cattle and make money off it, that's just "freedom" and "liberty." If black people are getting government-subsidized land to live in so that they can take care of their families, that's somehow illegitimate. You can get into the weeds of this, pointing out that most people receiving government assistance do work and aren't lazy, as Bundy assumes, but the most important takeaway here is the highly racialized notions of who deserves government help, and for what, and who doesn't.

This worldview, where white conservatives deserve to have the government provide them raw resources to get rich while everyone else should be left to die in the street, is not limited to these few people holding down a federal building in Oregon. When Cliven Bundy had his standoff demanding even more money from the feds in 2014, he got widespread support in conservative media, at least until his racist rant made the hypocrisy of his worldview too blatant to deny. Similarly, some of the current GOP candidates, especially Ted Cruz, backed Bundy to some degree in his crusade to greedily lap up even more government-subsidized food for his cows than he was already getting.

No big surprise, then, to find that conservative bloggers and pundits are rallying around the Oregon militiamen. Even if they hesitate to sign off on the tactic of taking over a building and unsubtly threatening a shootout with federal officials, the general consensus from these "small government" types that supposedly abhor "government dependency" is that while food stamps are illegitimate, a bunch of rural white people demanding to be given a bunch of ranch land for free is just peaches.

Right now, the Republican candidates are largely staying mum about the Bundy family and their supporters grabbing weapons and threatening to kill people in order to get even fatter government giveaways than they are currently getting. This isn't a big surprise. While the tactics of threatening people with guns might make some conservatives uncomfortable, the underlying principle that these militiamen are standing up for---more free stuff for white conservatives, nothing for everyone else — is the motivating principle of the modern conservative movement. To speak out against this would just drive more voters to Trump, and so expect candidates to smile and demur as long as possible rather than offend white conservatives who love government giveaways, as long as people like them are the beneficiaries and no one else gets a piece of the pie.