Bill Cosby’s arrest is just the beginning: Prosecuting rape and the long, difficult road to justice

Cosby's sexual assault charges may feel like a victory, but this is real life, not an episode of "Law & Order: SVU" 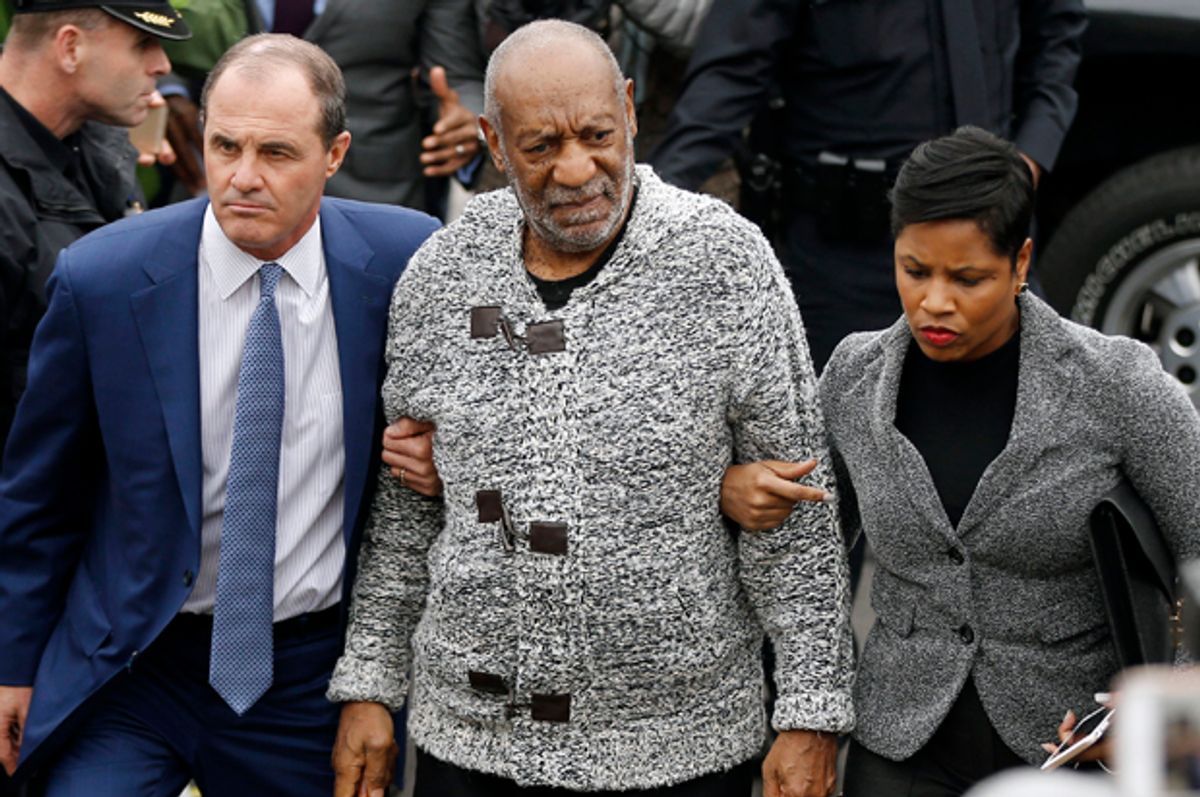 Last Wednesday’s arrest of Bill Cosby was an event four decades in the making. The comedian and former ‘80s sitcom star is being charged with sexually assaulting Temple University employee Andrea Constand, who alleges that Cosby drugged and raped her in 2004. An affidavit from Constand’s counsel suggests that Cosby “sought to incapacitate” her through pills and wine, which rendered Constand unable to resist or fight back.

That exact pattern should be familiar to anyone following the ongoing Bill Cosby accusations. Following a 2014 stand-up set in which comedian Hannibal Buress testified to Cosby’s public record of abuse allegations, more than 50 women—and counting—have come forward to tell their harrowing stories of sexual assault. The accounts are as similar as they are horrific: Many victims were young women hoping to get ahead in the entertainment industry, who looked to Bill Cosby, America’s most recognizable TV dad, as a mentor. He allegedly used that position of authority and their vulnerability to corner them—inviting them to a hotel room where they would be slipped Quaaludes, knocked unconscious, and given a cab ride home after they awoke.

Andrea Constand’s pending case might feel like vindication for those women, and I hope that she gets the justice denied to so many. But while Cosby being brought to trial might feel like a victory for sexual assault survivors and advocates, Cosby’s alleged victims continue to face an uphill battle in terms of actual prosecution. There’s a reason that few accused rapists (around 3 percent) ever see a jail cell: In the U.S. legal system, sexual assault cases remain extraordinarily difficult to prove beyond a reasonable doubt in court. That’s not because a bunch of women aren’t telling the truth — research shows the incidence of false rape claims is very low — but due to the criminal legal system itself.

There’s a reason that so few women (just 32 percent) ever report their sexual assault to authorities and why many—like the Cosby accusers—might wait decades to speak up: It’s extremely hard to build a case (even in the most seemingly open-and-shut reports) that proves the guilt of an assailant “beyond a reasonable doubt.” As the Bill Cosby cases remind us, many states have strict statutes of limitations that place time limits on how long a victim can wait before speaking up. In Pennsylvania, where Constand’s case is being tried, it’s 12 years. That might seem like a long time, but it may take survivors decades to come to terms with what happened to them or have the bravery to go to the authorities.

For those who haven’t been sexually assaulted (I have), reporting rape might seem no different than reporting any other crime—like if your watch is stolen. Something bad happens to you, and you go to the police. Seems simple, right? But on top of the shame and self-blame that can come from surviving sexual assault, rape is a crime that is uniquely difficult to report or even bring up to other people—whether it’s friends and family or authorities. You face the judgment of your community (who may or may not be supportive), the potential strain on personal relationships, and the knowledge that you may be blamed or not believed. As the case of Steubenville, Ohio, showed, we rarely thank victims for their courage.

In a piece for the New York Daily News, Meredith Donovan asks us to imagine what it’s like to be in that hot seat, under the glare of an often very public investigation. As a survivor, you are forced to:

“Answer questions, knowing that people are judging you. Think about the last time you had sex. Tell a room full of people about every touch, sight, sound, smell and taste of that experience. Answer questions, knowing that people are trying to decide if you’re lying. If you can do that you will have some idea of the bravery it takes for a sexual abuse victim to come forward.”

In addition, evidentiary support isn’t nearly as simple as crime procedurals like “CSI” and “Law & Order: SVU” make it look. Many sexual assaults—especially if the victim was vaginally penetrated with the assailant’s fingers (as Constand alleges)—lack physical DNA evidence or the “fluids and fibers” ever-present when Olivia Benson is on the case. “Medical exams are not the smoking guns that will tell us once and for all if a woman was raped,” Donovan writes. “Because sexual abuse is intrinsically a private act, direct evidence is usually only provided by the victim. As such, a lot is required of victims.”

Although Donovan argues that prosecution is much simpler in the rare occasion that the sexual assault is caught on tape, even a recording has not been shown to be enough to convict in rape cases. According to the Women’s Law Project, Crystal Harris submitted into evidence audio of her husband, Shawn, allegedly assaulting her in a 2010 case. After she says her abusive husband repeatedly threatened her life, Harris placed a recorder in her bedroom to capture his remarks on tape. Instead she recorded what she describes as him raping her, and her pained screams would be played to jurors during the subsequent trial. Her husband’s attorneys, however, dismissed the tape as “role play.”

That defense might sound laughable, but it worked: Shawn Harris was found guilty of “oral copulation,” and the other charges against him were dismissed. In a particularly galling turn of events, Crystal Harris was mandated by the California Court System to pay her husband alimony before his conviction.

There’s an old saying that a grand jury would indict a ham sandwich, but when it comes to rape trials, juries rarely convict just about anyone. Despite the fact that DNA evidence indicated that Tennessee Titans cornerback Perrish Cox (then with the Denver Broncos) impregnated a woman who claimed that Cox raped her, Cox’s lawyers maintained the two were never intimate. As Ebony’s Zerlina Maxwell reported, his counsel “argued the DNA test had been tampered with and the results couldn’t be trusted.” Perrish Cox was acquitted.

There’s always a reason not to believe victims, even when all signs point to a conviction. In 2011, a New York police officer was accused of raping a woman who had drunkenly nodded off in a cab, while his partner “stood guard.” “Video showed the officers leaving and returning to her apartment repeatedly,” wrote Feministing’s Jos Truitt. “[Officer Kenneth Moreno] said he kissed the woman and ‘snuggled’ with her when she wasn’t wearing a bra but didn’t rape her.” Even more damningly, Moreno was recorded assuring the victim that he was wearing a condom during the encounter. This was, of course, while denying in court that he had ever engaged in intercourse with her.

However, the jury found that the survivor’s testimony was “inconclusive” because she wasn’t fully conscious to witness the altercation. They ruled not guilty.

The current case against Bill Cosby seems just as unassailable as these claims. Cosby maintains that the sexual relations in question were consensual. In 2004, Andrea Constand, who served as the director of operations for the women’s basketball team at Temple University, visited Cosby at his home in 2004. Cosby is arguably the school’s most famous alumnus, and as the Advocate reported, he’s generously supported the college’s athletics program in the past. It’s highly doubtful that Constand agreed to the activities alleged to have taken place during the visit: She’s an out lesbian.

In addition, Bill Cosby himself admitted during a 2005 deposition that he had administered Quaaludes to women for sexual purposes. Cosby claims his use of drugs was innocent; he just wanted the women to “cheer up.” That comment might seem like the smoking gun his accusers need to finally convict a man who has outrun justice for far too long, but when it comes to the U.S. legal system, a smoking gun doesn’t exist—outside of an actual confession of guilt from the accused. Needless to say, Constand is unlikely to get that kind of admission here.

What, exactly, do victims need? In a must-read 2011 essay for Jezebel, Anna North outlines many of the changes that must take place to hold the system accountable: We need to educate jurors on the obstacles that rape survivors face in prosecution, put the burden of proof on assailants (instead of blaming and scrutinizing victims’ history), and challenge our popular definitions of what sexual assault “looks like.”

Earlier this year, the United Kingdom pushed forward new regulations that force defendants to prove that the victim affirmatively consented to intercourse (e.g., that they said “yes”). These laws are an important step forward, but so much change needs to take place in the United States—and everywhere else—before justice can be adequately served. Because in a system that continues to give men like Bill Cosby the upper hand, we can handcuff accused rapists all we want. But that means nothing when we continue to give them every single possible key to get out and walk away scot free.