"Tequila crazy" and "martini maudlin": Do different kinds of alcohol give us a different buzz?

Well, booze is booze, but there are 3 possibilities for why you might seem to get drunker from a shot than a beer 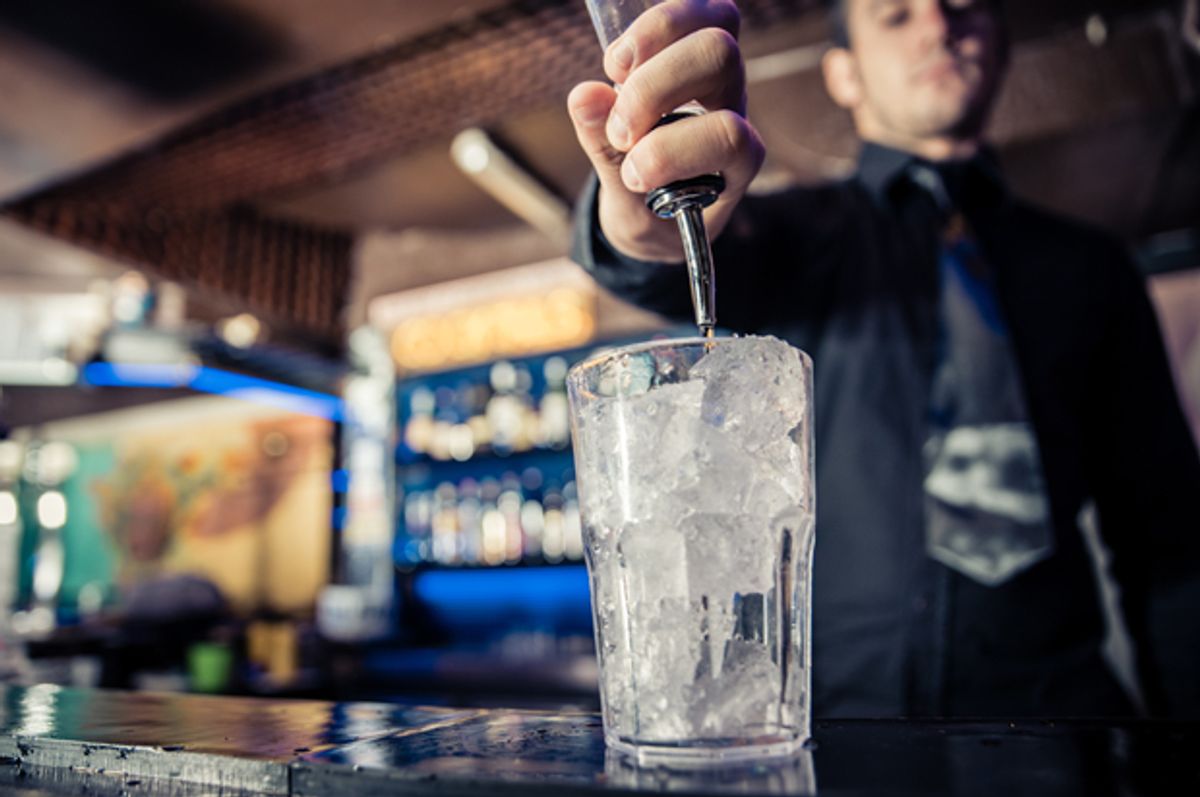 We've all heard the folk wisdom about how different kinds of alcohol affect us differently. "I go crazy on tequila," one person claims. "He's okay drinking beer, but he's a mean whiskey drunk," is an oft-heard refrain. "If I drink gin, I turn into a big, maudlin crybaby," someone asserts.

But is it true? Does the kind of alcohol we drink influence the kind of buzz we get? The science doesn't seem to support the folk wisdom.

First off, booze is booze. Whether you're drinking beer, wine or hard liquor, the active ingredient—the stuff that gets you drunk—in each beverage is the same: ethyl alcohol or ethanol. Yes, hard liquor contains more ethanol per ounce than beer or wine, but it's the amount of ethanol consumed, not the vehicle for consuming it, that makes the difference.

We recognize that different kinds of alcoholic beverages are of varying strengths—drinking 12 ounces of 80 proof (40%) hard liquor will get you much more intoxicated than 12 ounces of 5% alcohol beer—but we can account for those differences by using the standard drink rule set by the National Institutes of Health. That rule posits that although alcohol by volume varies by beverage we can assume that a 12-ounce beer equals a 5-ounce glass of wine equals 1.5-ounce shot of hard liquor. They all have about the same amount of pure alcohol and they should all affect drinkers similarly.

If people claim they get more wasted on six shots of tequila than a six-pack of beer, the reason is not that they're drinking more alcohol or a different form of it—they are most likely sucking down the shots much more rapidly than they're swilling the brewskis. For all but the most crazed beer-hounds, it takes at least a few minutes to finish that beer, while multiple shots can be downed rapid-fire in a matter of seconds.

That rapid ingestion of alcohol is going to cause a rapid spike in blood alcohol levels, as well as an associated rapid decrease in inhibitions, sense of propriety, judgment, and motor skills. But it's not because you drank hard liquor instead of beer; it's because you ingested massive amounts of ethanol in a hurry.

Still, people are going to claim different forms of booze affect them (or others) differently. What can account for that? There are three possibilities, and the first is the likeliest.

As a 2006 review paper on alcohol expectancy effects noted, "Studies of alcohol effects on motor and cognitive functioning have shown the individual differences in responses to alcohol are related to the specific types of effects that drinkers expect. In general, those who expect the least impairment are least impaired and those who expect the most impairment are most impaired under the drug. Moreover, this same relationship is observed in response to placebo."

And if we think a drink is going to get us drunk, we're likely to feel drunk even if there's no alcohol in it. That's the alcohol placebo effect, and it's been demonstrated repeatedly in the scientific literature. In one well-known example in 2003, a group of students in New Zealand were given bottles of tonic water and lime they were told contained vodka. That group experienced serious recall issues, while the control group did not.

"A lot of this is folk memories and cultural hangovers," pharmacologist Paul Clayton, former senior scientific advisor to the UK government's Committee on the Safety of Medicines, told the Guardian. "A lot of it depends on what mood you were in when you started drinking and the social context. The idea that gin makes you unhappy probably comes from its nickname 'mother's ruin'—the idea that it makes women depressed, which is a cultural idea. But fundamentally, alcohol is alcohol whichever way you slice it."

"We look for patterns in our lives that promote a good time. If we have a really great night, we try and re-create exactly what we did,” said UCLA psychiatry professor Timothy Fong. But whether your experience was tequila crazy or martini maudlin, "the body can’t tell the difference between whiskey, gin, or beer. It just sees alcohol, and it processes that alcohol,” he added.

Mixers. When we drink alcohol, we don't always just drink alcohol. Little research has been done on how what we mix with our booze may affect the high (are "red beer" drinkers more mellow than plain beer drinkers?), but it seems like the mix (or lack of) might play a role. Do people drinking tequila shots get a different feel from those drinking margaritas or tequila sunrises? How does sugary cola affect alcohol's impact? What about mixing vodka and super-caffeinated energy drinks like Red Bull? Perhaps the different high is not because of the booze you're drinking, but because of what you're drinking with it.

Congeners.These are byproducts of fermentation and distillation, and include acetone, acetaldehyde, esters, and terpenes, as well as forms of alcohol other than ethanol, such as methanol. Different kinds of alcohol contain different types and quantities of congeners, so while single shots of 80 proof rum, whiskey and tequila have the same amount of alcohol, they have significant variations in congener content. Congeners contribute to an alcohol's smell, flavor, and color, and could have an impact on the type of alcohol buzz, but this isn't proven.

Still, the bottom line seems to be that booze is booze, and how (and to what degree) you get drunk is more a function of what you expect than the poison you pick. Happy New Year!