"God has been good to us": Justice Scalia walks all over First Amendment by claiming government can promote religion 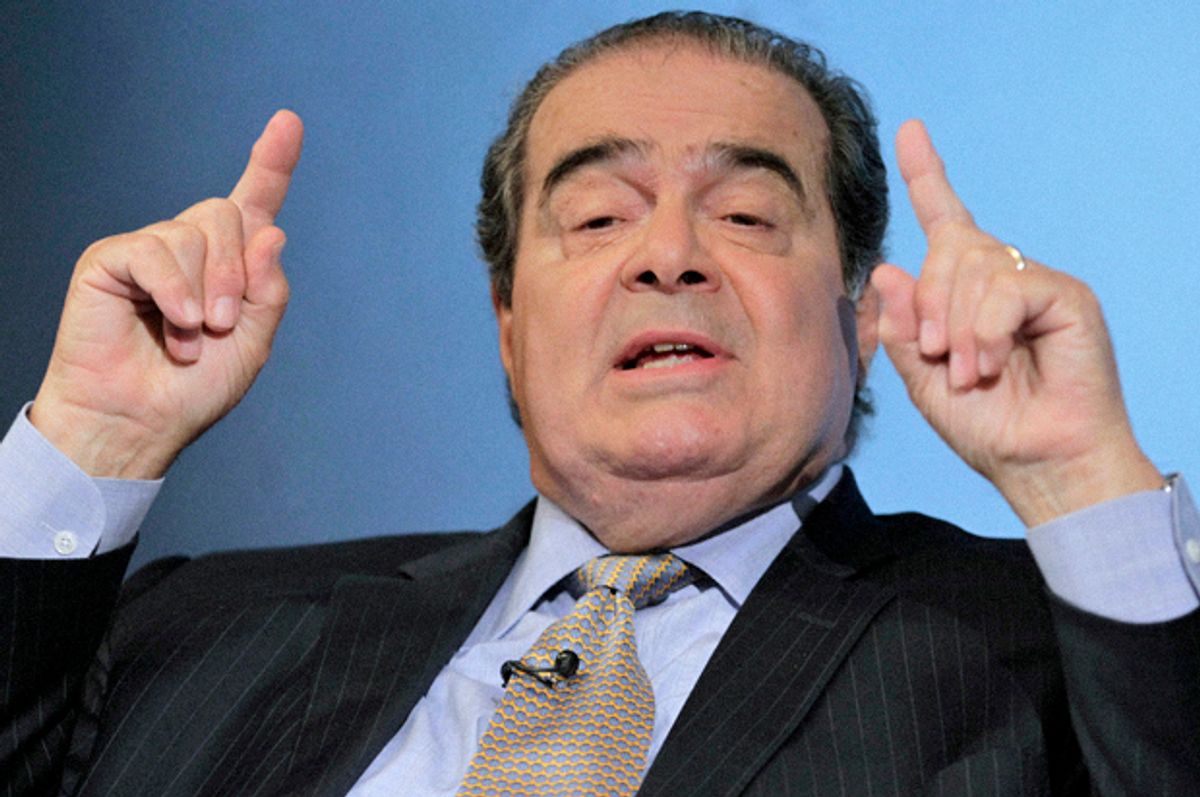 U.S. Supreme Court Justice Antonin Scalia gave a speech in Louisiana over the weekend in which he reaffirmed the suspicion that he doesn't understand – or willfully ignores – the First Amendment of the Constitution. Speaking at a local Catholic high school, Scalia argued that there's “no place” in our constitutional tradition for the principle that government ought to be neutral with respect to religion. “You can't favor one denomination over another,” he conceded, but neither can you favor non-religion over religion. Well, yes, but the reverse is no less true.

The state should continue to praise God, Scalia added, because “God has been very good to us.” Like every other theocracy in the history of our species, it turns out God has a special interest in our destiny, and indeed intervenes on our behalf. “That we won the revolution was extraordinary. The Battle of Midway was extraordinary. I think one of the reasons God has been good to us is that we have done him honor. Unlike the other countries of the world that do not even invoke his name we do him honor. In presidential addresses, in Thanksgiving proclamations and in many other ways,” Scalia said.

Many would prefer to credit the men and women who led the revolution, who bled on the battlefields, who challenged Nazi occupiers and liberated death camps, with those victories. Not Scalia, though. It's because our politicians make all the right propitiations to God that we prevailed in those conflicts, even though the thugs in ISIS and the clerical oligarchs in Iran make the same propitiations, only with greater frequency. Virtually every nation and army engaged in combat has believed God an ally, including Nazi soldiers, who mouthed the phrase “Gott mit uns” (God with us) while tossing corpses in ovens.

The God-is-on-our-side narrative is obnoxious enough, but equally troubling is Scalia's grasp of the Constitution, which is clearly blinkered by his personal faith. The First Amendment is straightforward on this question: “Congress shall make no law respecting an establishment of religion, or prohibiting the free exercise thereof; or abridging the freedom of speech, or of the press; or the right of the people peaceably to assemble, and to petition the Government for a redress of grievances.”

It's obvious that Scalia doesn't quite understand the concept of neutrality as expressed in the Establishment Clause. Neutrality with respect to religion means precisely that the government has no position on religious matters. And that means, by definition, that God and state are separate. The First Amendment is silent on the question of favoring one denomination over another; instead, it wisely prohibits the establishment of any religion, including Christianity. As Jeff Schweitzer noted, “The right not to believe is no less protected by our Constitution than the right to believe in any particular God. If the government cannot favor one religion over another, it cannot favor belief over rationalism.”

Scalia's willful ignorance on this front is not new. In 2005, when the Supreme Court addressed the constitutionality of religious displays on public property, he described the Ten Commandments as “a symbol of the fact that government comes – derives its authority from God. And that is, it seems to me, an appropriate symbol to be on State grounds.” He added that the display of the Ten Commandments confirms “the principle of laws being ordained by God is the foundation of the laws of this state and the foundation of our legal system.”

This is as wrong as it is offensive, and Scalia ought to know better. America is a nation of secular laws, not religious edicts. The Constitution doesn't reference God or Christianity or Christ. And the Declaration of Independence states clearly that the government derives its authority not from God but from the consent of the people, and that the powers of government reside in the Constitution. This is what makes the United States unique as a secular republic.

If Scalia wasn't a religious zealot, he would happily acknowledge these facts. His refusal to do so is a reminder that our highest court desperately needs representatives who reflect its secular roots.