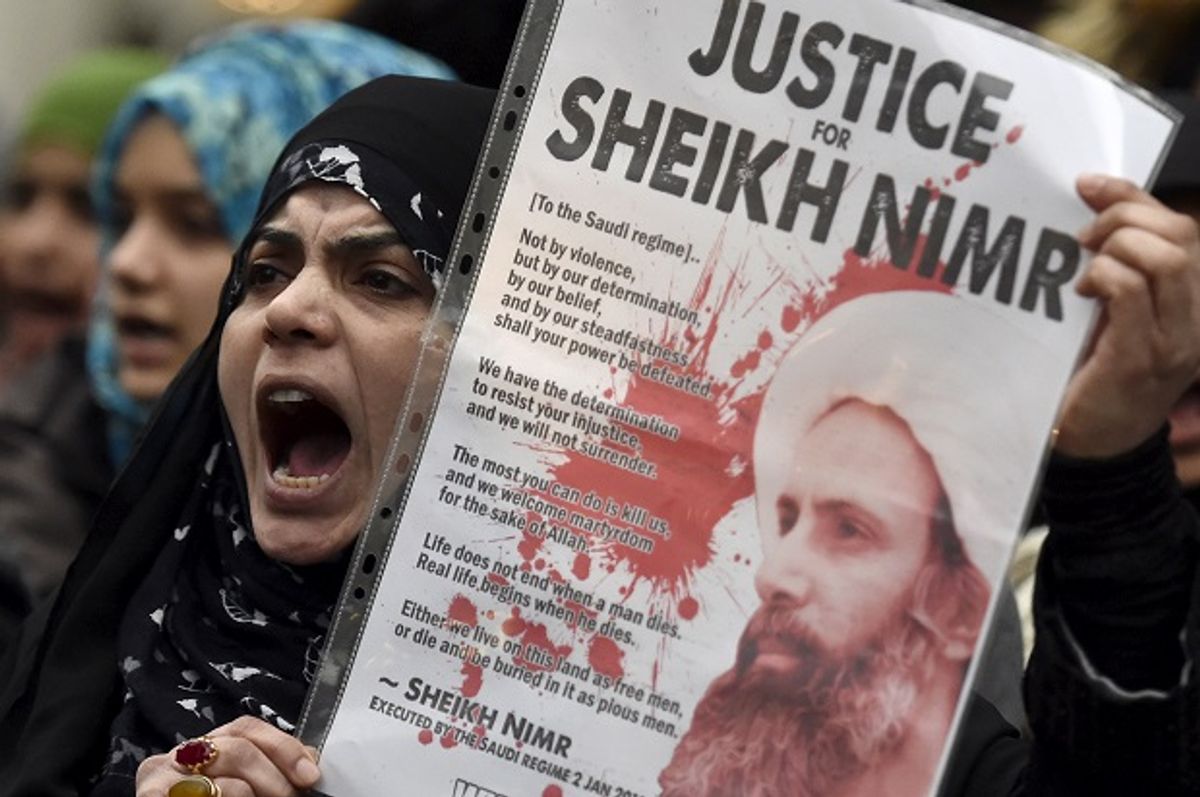 Saudi Arabia beheaded 47 people in mass executions across 13 cities on Jan. 2. The beheadings have inspired a public discussion about the close western ally — a theocratic absolute monarchy that supports extremist groups and brutally represses all pro-democracy dissent.

Amnesty International blasted the Saudi monarchy for its mass executions. "Saudi Arabia's authorities have demonstrated their utter disregard for human rights and life by executing 47 people in a single day," the leading human rights organization said.

The Saudi monarchy claims the people it executes are "terrorists," but Philip Luther, director of Amnesty's Middle East and North Africa Program, pointed out that "the killing of Sheikh Nimr al-Nimr in particular suggests they are also using the death penalty in the name of counter-terror to settle scores and crush dissidents."

Cleric Nimr al-Nimr was a leader from the country's Shia religious minority, and had been arrested for leading non-violent protests against the monarchy in 2011-2012. Amnesty said al-Nimr and others "were clearly sentenced to death after grossly unfair trials."

"Carrying out a death sentence when there are serious questions about the fairness of the trial is a monstrous and irreversible injustice," Luther added. "The Saudi Arabian authorities must heed the growing chorus of international criticism and put an end to their execution spree."

Amnesty International also drew attention to Saudi activists Ali al-Nimr (the nephew of Sheikh al-Nimr), Abdullah al-Zaher and Dawood Hussein al-Maroon. All three were under age 18 when they were arrested for attending protests, and subsequently sentenced to death by the Saudi monarchy. International law prohibits the use of the death penalty against anyone under age 18.

Other human rights organizations and experts pilloried Saudi Arabia for its repression — and allied countries like the U.S. for doing little to nothing to stop it.

Bahraini human rights activist Maryam al-Khawaja spoke with Salon about the mass executions and repression. Al-Khawaja has herself faced such repression for criticizing autocratic U.S. ally Bahrain. Her father, the founder of the Bahrain Centre for Human Rights, was imprisoned for life for leading a peaceful pro-democracy uprising in Bahrain in 2011, which was crushed by a U.S.-backed Saudi military invasion.

"In regards to the U.S. reaction, I had already predicted that it would not amount to more than a slap on the wrist," al-Khawaja said. "I don't think that the U.S. has done anything to prevent" such repression, she added.

"The U.S. and U.K. actively provide Saudi with the international impunity which allows it to commit these horrific crimes," al-Khawaja explained. "Case in point, look at Yemen. Saudi does what it does because it can."

In her reference to Yemen, Al-Khawaja was recalling the Saudi-led war on the country —  the poorest in the Middle East. Since March, approximately 6,000 people have been killed in Yemen, the majority in western-backed coalition airstrikes. Human rights organizations say the Saudi-led forces have carried out war crimes, bombing weddings, hospitals, schools, civilian neighborhoods and humanitarian aid warehouses. The U.N. notes that the U.S.-armed coalition is responsible for two-thirds of civilian casualties.

Al-Khawaja greatly lamented the killing of Sheikh al-Nimr. She stressed that Al-Nimr was renowned for his opposition to sectarianism. The cleric explicitly maintained that Sunnis and Shias are not enemies; rather, he insisted it is the regimes that oppress both of them that are their true enemies.

"Never defend an oppressor. It is never justified for someone who is oppressed to defend [another's] oppressor," al-Nimr maintained.

After Sheikh al-Nimr and the 46 others were executed, protests erupted across the Middle East. In neighboring Bahrain, activists filled the streets.

Dozens of Bahrainis were arrested for participating in the protests. Al-Khawaja says medic Dr. Saeed al-Samahiji was detained, along with 13 people under age 18.

"With Bahrain it is the same as Saudi, their international impunity is what enables the local impunity," al-Khawaja explained.

The U.S. government has mostly been quiet, but it did criticize the Saudi monarchy for the mass beheadings, albeit much less forcefully than it has with other nations.

"We have previously expressed our concerns about the legal process in Saudi Arabia and have frequently raised these concerns at high levels of the Saudi Government. We reaffirm our calls on the Government of Saudi Arabia to respect and protect human rights, and to ensure fair and transparent judicial proceedings in all cases," the State Department said the day of the killings.

"The United States also urges the Government of Saudi Arabia to permit peaceful expression of dissent and to work together with all community leaders to defuse tensions in the wake of these executions," it added.

In September, the State Department said it "welcomed" the news that Saudi Arabia would be heading a U.N. human rights panel. "We're close allies," it indicated.

Some journalists pointed out, however, that the language the U.S. used in its criticisms of the Saudi monarchy is much tamer and more reserved than the language it uses to criticize other countries, such as Iran.

The U.N. also criticized Saudi Arabia for the mass beheadings -- but, like the State Department, its language was very reserved.

U.N. officials said they "expressed deep dismay and regret over [the] executions" and noted that the "trials that raised serious concerns over the nature of the charges and the fairness of the process." The U.N. News Center reported that High Commissioner for Human Rights Zeid Ra'ad Al Hussein "was extremely concerned about the recent sharp increase in executions in Saudi Arabia."

When discussing Iran, harsher language was again used. U.N. Secretary-General Ban Ki-moon voiced "dismay" at the Saudi mass executions, but voiced "condemnation" of protesters' subsequent attack on the Saudi embassy in Tehran, in which no one was killed.

Critics have long argued that there is a double standard in the international community's treatment of Saudi Arabia. The Jan. 2 mass beheadings have reinvigorated the debate around the close U.S. ally.