They created our Bundy/Trump hellscape: Fox News' angry white audience will destroy us yet

47 percent of Fox viewers get all their news there. They are horribly misinformed. And we wonder why Trump leads? 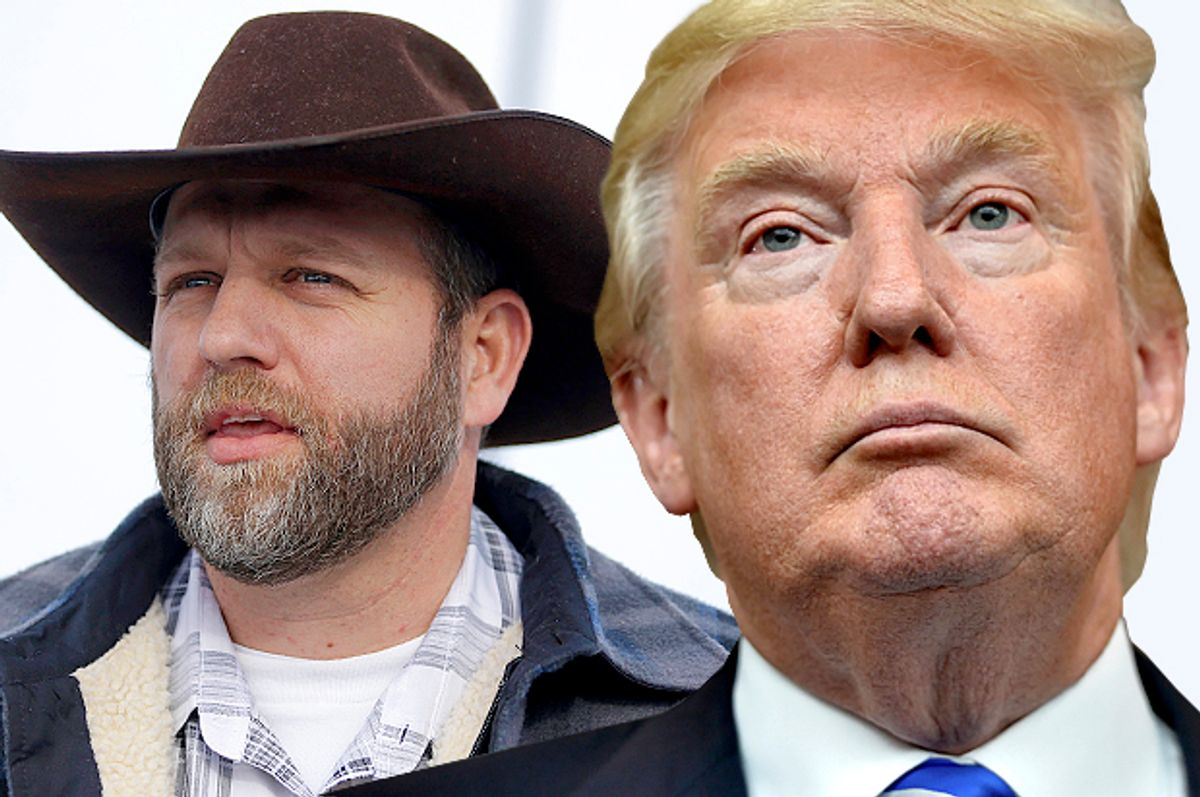 The latest ratings are in: Fox News is No. 1 in cable news, No. 2 overall (behind ESPN) in Nielsen's report for 2015—the highest-ever ratings for a cable news network. So it’s official: Fox News has finally destroyed television news and turned it into nothing more than blood sport.

It should come as little surprise that 2015 offered Fox News a healthy bump. Not only did it have the ongoing GOP clown car and the opportunity to host the first GOP debate, which yielded a record-breaking 24 million viewers, but it also had the gift that keeps on giving—Donald Trump.  While all of the news networks (and the fake news ones as well) offered viewers a healthy dose of Trump coverage, Trump was a big boon to Fox News.

It wasn’t simply the shared party affiliation between Fox News and Trump that made the difference; it was the fact that Trump literally embodied everything that Fox News stands for -- you know, like making things up and refusing to be questioned, rampant bigotry, misogyny and class warfare. Oh, also, favoring cult-like populism over rational democracy; an attitude of bluster, bias and bullying; and a rhetoric of patriotism veiling a politics of elitism.

Just as Trump’s popularity didn’t drop in the face of his ongoing insult to everything this nation stands for, so, too, with Fox News. They can fight all they want, but it does not change that down deep, they are peas in a pod. Fox News’ ratings didn’t go down in response to the ongoing fact-averse, bigot-machine it has become-- they went up!  Every time Fox News –like Trump—gets called out for crossing the line or lying, its loyal band of followers circles the wagons, hunkers down and keeps on watching.

While many of us are still in shock, waiting for that one moment when the nation wakes up and turns off the No. 1 idiot channel on the idiot box, it’s time to take seriously the role of Fox News and its power to influence public discourse.  We didn’t get here overnight.

Recall that back in 1985 Neil Postman warned us that television was going to destroy us in his brilliant book “Amusing Ourselves to Death.”  Postman warned that the public was addicted to amusement and that the distraction would lead to ever-increasing totalitarian control of the population. He argued that, if the public relied on television for its news, we were doomed, since the medium of television could only offer news as entertainment and commodity.

By the time of Postman’s grim -- but all-too-real –predictions, television news had already undergone two major shifts that would forever limit its potential as a source of useful public information.  When cable television was a standard feature in U.S. homes, television news had to compete with other types of programming offered at the same hour.  When a talking head had to go up against the babes in bikinis of “Baywatch,” television news changed.   It tried to get “sexy.”

Geoffrey Baym tells us in “From Cronkite to Colbert” that, in reaction to the greater programming offered by cable, television news became more graphic-intense in an effort to captivate viewers.  Viewers were barraged with images, info boxes and more.  But as the visual stimulation went up, the critical information went down.

When CNN was founded in 1980 it got much worse.  Television news was not limited to major networks offering a half-hour nightly show, now we had news 24/7. The problem was that there wasn’t enough news, or enough journalists, to offer substance all day. To fill the time, CNN offered a host of opinion shows and pundit television began to substitute for reporting. Rather than watch news and form an opinion, viewers had their opinions handed to them.  And before long pundits were the sources of information used by the public since their shows were more “fun” to watch. As viewers had more fun, they learned less and less.

That was the television news climate when Fox News was founded in 1996. Fox News changed the scene dramatically because it was openly committed to offering news with a partisan spin. Up until the launch of Fox News, cable news was well on its way to stupidity—but it wasn’t necessarily partisan stupidity. Few recall that Ann Coulter started on MSNBC, for instance.

A key pivot moment for the success of the network was 2008 when Eric Boehlert predicted Fox News was “in for a very rough” year.  Boehlert was right. It should have been a rough year. At the time, CNN was dominating and the GOP was faltering. But even a critic as smart as Boehlert couldn’t predict what would happen in this nation as a consequence of the election of Barack Obama and the founding of the Tea Party. The right wing veered in those years into a party of extreme fundamentalism and unabashed bigotry. Fox News was where we all got to watch it happen.

That was the time when Fox News went from being a propaganda machine for the GOP to being the Kool-Aid for the party. Win or lose, right or wrong, it didn’t matter -- Fox News viewers kept tuning in. We could run down the lists of not just lies, but outrageously offensive Fox News moments—as many have and will –but the important lesson is that Fox News viewers don’t care. (If you’d like a refresher, check here and here.)

Fox News went from being a spectacle heavy, GOP-biased cable news network to a cult.  People didn’t just pledge allegiance to the party; they offered loyalty to Fox News.

Forty-seven percent of Fox News viewers get their news only from that one source. And those same viewers are the dumbest on issues in the nation.

They might be dumb, but they are fiercely loyal. And that’s why only ESPN can claim more viewers. Fox News viewers are nothing more than rabid fans cheering on their party. Or they are devout believers. Either way they aren’t tuning in for anything that resembles news.

“Fox News” should no longer be considered a news network. Instead it should be compared not just to ESPN, but also to cult-like networks like CBN with its “news/magazine” program “The 700 Club.” How else to explain why no amount of mis-reporting hurts its standing with its viewers?

Seven years after Boehlert predicted trouble for Fox News, he cautioned it was in for trouble again at the start of 2015 when Obama’s approval rating was going up and it was being threatened with a lawsuit from Paris in response to reporting on “no-go” zones in Europe.  And yet, just like 2008, nothing happened.

Nothing happened because Fox News viewers don’t care about reality or the truth; they watch for the sport of it and they simply can’t turn away.

Seems grim, but here’s the silver lining. Fox News is No. 1 in “news” and No. 2 overall, but that’s according to Nielsen’s ratings. And we should all question how valid those are as a snapshot of viewing tendencies. Nielsen doesn’t capture the various ways most of us get our “television” news. In fact, it captures only those who watch television for news-- a demographic that is skewed older and more conservative.

And here’s the really good news. Nielsen tells us that Fox News is No. 1 in cable news, beating out CNN and MSNBC. But who really cares? Again, most folks who get news from sources other than Fox News don’t like cable news at all. They seek news information with more substance online, on air and in print.  And if they watch their news, they are more likely to watch “fake” satirical news.

If we add up the viewers for Stephen Colbert, Lee Camp, Trevor Noah (especially his amazing team), John Oliver and Larry Wilmore—each of whom offers important correctives to the biased blather on Fox News—we get way more viewers than those for Fox News.  Jon Stewart, who held the spot for most trusted journalist, may currently be off the grid, but his fellow political satirists are offering us a daily dose of satire news in a format proven to enlighten audiences rather than brainwash them.

It’s ironic, but, as cable news has become a mockery, it is the political comedians who are taken seriously. They are more trusted, they consistently “break” stories being ignored in the mainstream media, and their viewers are smarter.