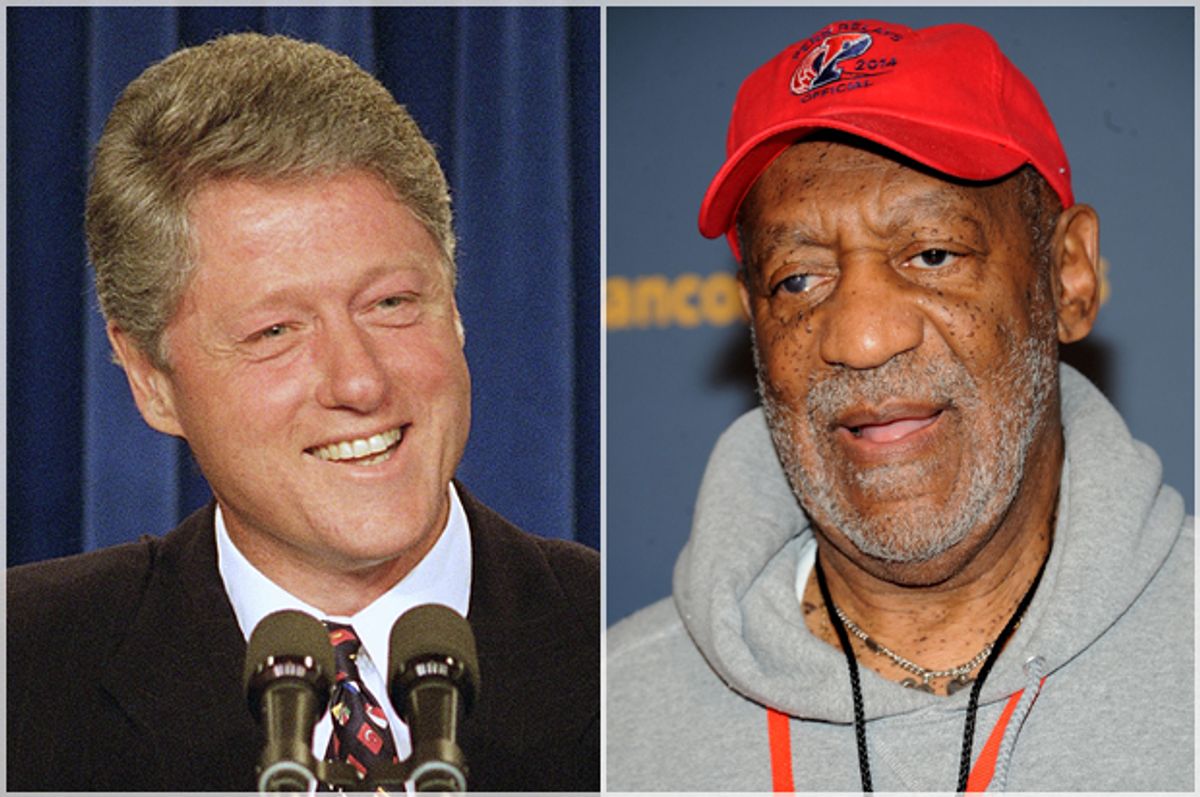 Heaven save us all from conservatives who think they have a "gotcha."

And boy they sure think they have one with Bill Clinton and the supposed "hypocrisy" of feminists who don't agree that his wife's career should be derailed because of allegations of sexual harassment and assault made against him in the 1990s.

At stake is this alleged unfairness that while some men accused of sexual abuse get in actual trouble for it, Clinton walks around free and even gets to campaign for his wife. Meanwhile Hillary Clinton, who, in a bit of ironically sexist logic for these supposed defenders of feminist integrity, is treated as an extension of her husband and therefore guilty of anything he might have done.

"Why is Bill Cosby finished? He was the most beloved guy," complained Mark Steyn last week, drawing into question whether he's angrier that Bill Clinton isn't in trouble or that Bill Cosby is.

A number of other conservative commentators played the same card. Donald Trump, of course, is way out in front of this, calling Bill Clinton "one of the great women abusers of all time."

Rand Paul gotcha'd himself into a frenzy, saying, "Hillary Clinton has brought this on herself, by saying women should be believed," as if the only choices are between believing all women or not believing any women at all.

In New Hampshire, a Republican legislator heckled Hillary Clinton over these accusations. Faux feminist Kirsten Powers compared Clinton's "bimbo eruptions" to the "Cosby situation," which had the added bonus of collapsing the difference between rape and Clinton's admitted consensual encounters with women not his wife.

You can see the sick genius of this gotcha. Even if it doesn't actually work to derail Hillary Clinton's campaign, it can still be used to silence and discredit women who are making substantive allegations of abuse on the grounds that if Clinton's accusers aren't believed, no one should be.

This entire gotcha is based on a straw man. Contrary to what conservatives might have you believe, it simply isn't true that feminists think every allegation of sexual harassment or assault, no matter how unlikely, should be treated like God's honest truth. What feminists want is to end the double standard, where sexual abuse allegations are disbelieved out of hand, subjected to more skepticism and second-guessing than any other crime, or dismissed even in the face of strong evidence. By saying most women aren't liars, we aren't denying that some women do lie. This is an important distinction.

"I think rape and sexual assault allegations should be treated like allegations of mugging or burglary —which is to say, investigated promptly and thoroughly, on the assumption that the person reporting a crime is telling the truth," Kate Harding, the author of 2015's must-read examination of rape culture, "Asking For It," told me over email. "But that's often not how it works — so many people, including many in the justice system, presume that anyone reporting a rape is just as likely to be lying as not. When feminists affirm that we believe victims, we're saying there's absolutely no good reason to presume that when someone reports sexual violence, there's a 50/50 chance they're lying."

"We're not saying we'll ignore any evidence that someone fabricated a claim of rape," she added.

Feminists don't want every rape accusation to be mindlessly believed. As Harding points out, there have been cases, "Steven Avery and the Central Park Five come immediately to mind," where "aggressive police who settled on the wrong suspects and blinded themselves to exculpatory evidence." What feminists object to is the common problem of police and prosecutors who are so wed to the idea that women lie for the hell of it that they blow off rape accusations, even ones where a reasonable amount of investigation would show the woman is telling the truth.

This matters with the Clinton case for a couple of reasons. One, it's downright laughable to compare the Clinton case to cases where law enforcement and prosecutors blow accusers off. Was there ever a more dogged and determined prosecutor than Ken Starr? This was a man who was so hell-bent on finding something to ding Clinton with that he resorted to questioning about consensual sex to catch Clinton in a perjury trap. Unlike prosecutors who wrongly assume that accusers are lying, Starr and his comrades in the Republican Party were clearly eager to believe. They just never got the evidence together, despite having all the political will feminists wish was applied to less politically convenient accusations.

Willey herself, after claiming that Bill Clinton groped her in 1993, is the source of some laugh-out-loud ridiculous accusations against the Clinton, namely that they had her cat killed and oh yeah, she likes to imply that they killed her husband while they were at it.

"When multiple people accuse the same man of sexual assault, I am certainly more inclined to believe it's true," Harding told me, pointing out that Bill Clinton is certainly a "pig." "I think the only intellectually honest answer is, we can't know if he did what those three women claim, but we can't rule it out, either."

This is true. We can never know with 100 percent certainty if these allegations are simply part of the same right-wing lying machine that accuses the Clintons of witchcraft, murder and kitty-killing, or if the right lucked out and found the one damn thing that Clinton did do. But feminists do not and have never said that sexual assault accusers need to be held to a lower standard of proof than people who accuse of other crimes, just the same standard of proof. And while Harding is right that multiple accusers, in most cases, sets up a pattern, it's equally true that there's another pattern at work here, of multiple right-wingers making lurid and false accusations against the Clintons. Under the circumstances, there's simply no way to know which pattern these accusations fit into.

Either way, the equation of the Clinton accusations and the Cosby accusations simply doesn't pass the smell test. Cosby has been accused by more than 50 women of sexual assault or attempted sexual assault, and there's no reason to think anyone would lie about it. Clinton, in contrast, has been accused of sexual harassment by Paula Jones and Kathleen Willey, and the only substantive accusation of rape, made by Juanita Broaddrick, was thoroughly investigated in the '90s. There simply is no evidence, one way or another, to tell if this was a sincere accusation or yet another incident of a wild-eyed Clinton hater with a grudge telling tall tales of murder and mayhem coming from those dastardly and satanic Clintons. Not all rape allegations are the same. And it's not feminists who are suggesting they should be treated that way.